You'll no longer have to buy a plane ticket to get in on the cocktails at Seattle's Essex: Owners Brandon Pettit and Molly Wizenberg (a.k.a Orangette) will be sharing their favorite recipes with us, every other week. Drink up, people.

Today: A refreshing, three-ingredient drink to get you through the last hot weeks of summer. 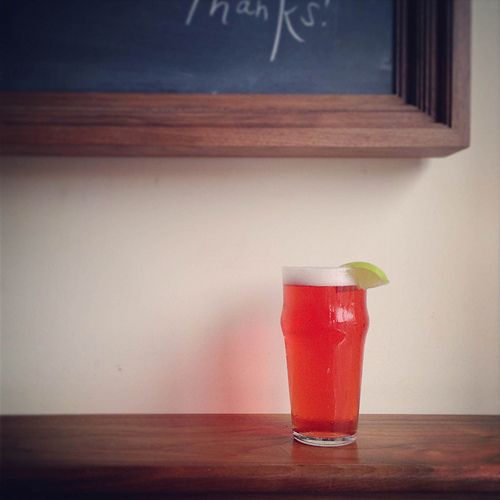 We stumbled upon this refreshing drink earlier this summer, when we were cooking at home on a night off and were desperate for a cold beer. But the baby was in bed and we didn’t want to go anywhere, and all we had on hand was a couple of long-ignored cans of Bitburger from a camping trip that Brandon took with his dad and uncle two summers ago. It was beer, technically, and it was, in fact, cold. But it wasn’t particularly great, so Brandon decided to try something: he added a healthy splash of Campari, the bright red Italian aperitivo, and dropped in a wedge of lime. And boom, we had our Summer Drink of 2013.

It sounds simple, and it is. But there’s something surprising that happens when the yeasty, lightly sweet flavor of beer bumps up against bitter orange Campari: the first softens the second, and the second smartens up the first. Together with the brightness of lime, it’s complex and a little sophisticated, but still entirely everyday stuff. At home, we make it with whatever light-colored, not-too-bitter beer we’ve got: the PBR that I bought for making beer-can chicken, or those Coronas from the Fourth of July. But at Essex, where our beer selection is more intentional, we like to make it with a Belgian-style white beer like Blanche de Bruxelles, or Avery White Rascal from Boulder, Colorado. 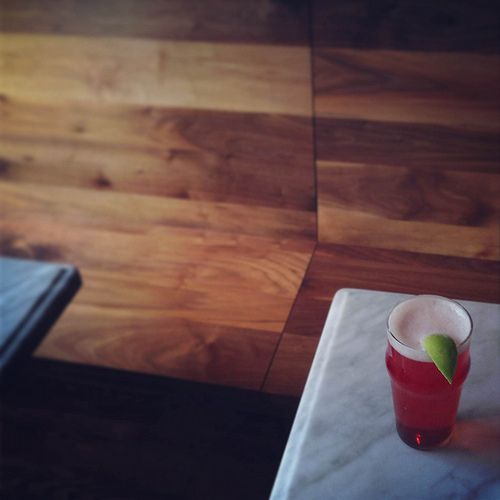 MckaylsewNsew September 7, 2013
i made this last weekend with ingredients on hand...found a lager in the fridge, swapped bottled lime juice for the fresh, and Aperol for Campari... so a bit lighter in flavor... it made a marvelous addition to our BBQ, Thanks for the inspiration.

Jan E. September 3, 2013
As a fan of Americano cocktails,as well as those light bright belgian lagers I cannot wait to try this. I don't care if it is September already...it's finally gotten hot here in Asheville. :)

James C. August 28, 2013
Sounds similar to a french classic -- Biere Picon, which is a light lager mixed with Amer Picon, the dark, lightly caramelized bitter orange liquor. This would be a bit drier, though, and sounds promising!

Rosie August 25, 2013
Drinking these right now, in our basement, where we're trying to stay cool on a hot, humid summer day. These are helping.

April S. August 24, 2013
Now that you are becoming published cocktail experts, you should travel to New Orleans one July and attend Tales of the Cocktail. It lasts several days and hosts experts from around the world with many seminars to enhance your skills! With your food knowledge, this would only build your repertoire as an expert par excellence!

laurenlocally August 24, 2013
Enjoyed one of these last night on the deck. Lovely.

Kukla August 23, 2013
This cocktail is called Monaco and it is a French version of Shandy. Last December, when we had “your-best-recipe-with-beer” contest, I was researching beer cocktails and read about many of them and this one including. It’s really very refreshing, beautiful and tasty.

kathleenmangia August 26, 2013
Monaco is bit different, made with grenadine syrup.

Phyllis G. August 22, 2013
I often talk to my Campari and say, "You're so neon. And weird. And you've been sitting on my counter for 12 months. What can i possibly do with you besides make a Negroni?" Now I know. (I made Negroni popsicles and they were a disaster!)

Kitchen B. August 23, 2013
Another use for Campari is to add it to Chapman. A Nigerian 'cocktail' of sorts, recipe on food52. http://food52.com/recipes/1340-nigerian-chapman-aka-african-sangria

LJ W. August 22, 2013
Yay, I have been following MW since reading A Homemade Life. Would LOVE to visit ESSEX in person, but this new column will have to suffice. Kudos to you guys.

fiveandspice August 22, 2013
a) Yay! I am so excited for this column, and am planning on stealing all of your ideas and passing them off as my own so that I can appear to be the *best* cocktail party hostess, and b) a Campari shandy is pure brilliance. I am adding this to the top of my list of things to drink once I am no longer incubating a baby.

Kitchen B. August 23, 2013
Congrats on the incubation Emily.

Yossy A. August 22, 2013
Daaaang. It's after 6 and I have all of these ingredients which means I am making one of these right now!

Lauren August 22, 2013
Campari & Blood Orange Soda has been my go-to all summer for the past two summers but sometimes (rarely!) it can get too sweet. This sounds a perfect compromise.

MollyandBrandon August 22, 2013
It's only mid-afternoon here, and Brandon has to work tonight, but we're considering it, too...

Kenzi W. August 22, 2013
Cheers from across the country? We're doing the responsible thing and waiting until 5:30. (We're a collective drag.)