Just like an Ikea trip wouldn't be the same without a pit stop at the cafeteria for some Swedish meatballs, the end of January wouldn't be complete without a no-nonsense, unapologetic meal of meat and potatoes.

This meal isn't light, but it won't put you in a food coma, either. Your greens are snuck into the twice baked potatoes, and the meatballs are the best kind of meatballs -- tasty enough to eat alone and just as good reheated the next day. After initial prep, both the meatballs and the potatoes are baked in the oven, giving you 25 solid minutes to put your feet up. Not pictured: a full mug of honey mulled wine and a generous slice of Almost Flourless Chocolate Cake (for dessert, of course). 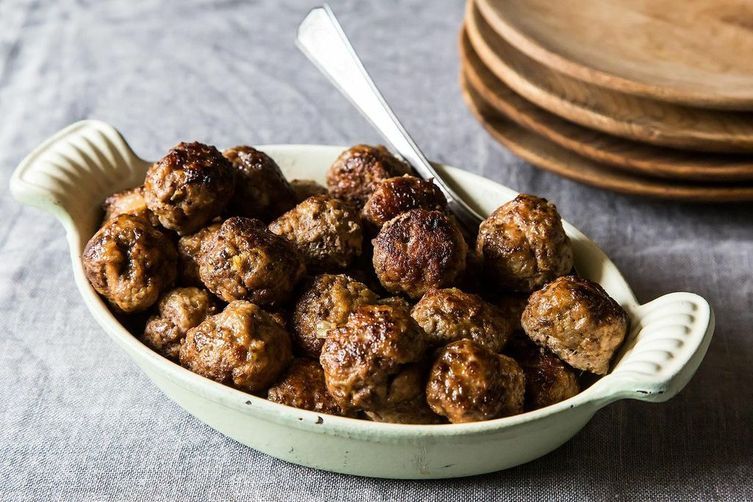 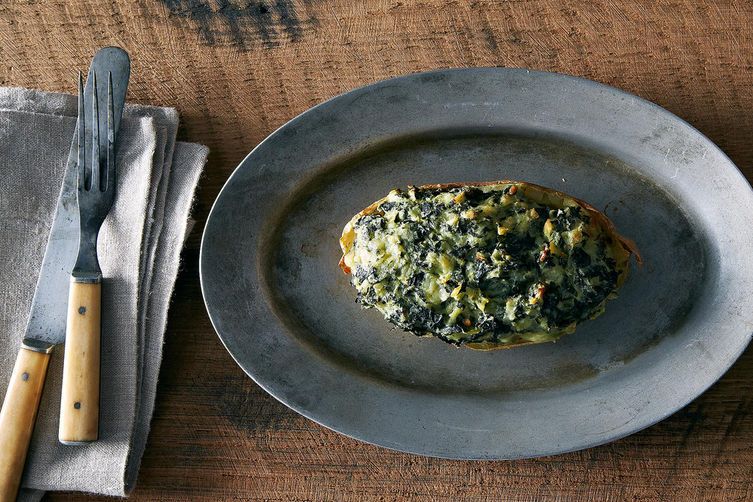 We're assuming you have some olive oil, garlic, Dijon mustard, mayonnaise, 1 egg, and crushed red pepper flakes. If not, add those to your shopping list, too.

1. Heat the oven to 350° F. Wash off potatoes and poke some holes in the skin with a fork. To cut back on cooking time, microwave the potatoes to soften the middle. (You will bake it later for the "twice-baked" part; that step will ensure the skin gets nice and crispy.) Cook the potatoes in the microwave for 15 minutes total, turning over every 5 minutes.

2. While the potatoes cook in the microwave, start the meatballs: Warm 1 tablespoon of olive oil over medium heat in a medium sauté pan. Add the onion, thinly chopped, and a large pinch of salt and cook, stirring frequently, until the onion has begun to soften and lightly caramelize, about 5 minutes. Add two garlic cloves, minced, and continue to cook until both the onion and garlic are soft and golden brown, about another 5 minutes. Set aside to cool.

3. In a large bowl, combine the ground chuck, ground veal, breadcrumbs, 1 teaspoon Dijon mustard, the Worcestershire sauce, Parmesan, and 2 tablespoons mayo. Stir it gently using two forks -- combine thoroughly but do not over-mix. Using your hands, gently work in the egg and the browned onions and garlic, until just combined.

4. Shape the mixture into 1 1/2-inch meatballs. Brown the meatballs in a little olive oil in a large frying pan over medium-high heat; then nestle them snugly into a large baking dish, cover with foil, and set aside.

5. In a medium sauté pan, sauté the kale: Heat 2 tablespoons olive oil over medium heat. Add shallot and crushed red pepper flakes and cook for 5 minutes, until soft. Add 3 garlic cloves, minced, and cook for 3 minutes. Add the kale, salt, and pepper and make sure the kale is coated with olive oil. Cover and let cook until soft and wilted, about 10 minutes, stirring occasionally. Remove from heat and chop up until almost paste-like. You want to be able to stir it into the potato mixture without any large pieces.

6. Once the potatoes are cool enough to handle, cut in half. Scoop out the center of the potatoes (which should be nice and soft), leaving about 1/4 inch of skin and potato. Put the insides in a large mixing bowl. Mash up the potatoes until they become one cohesive mass. Add the sour cream, cheese, kale, salt, and pepper. Combine into one delicious, creamy mixture. Taste and adjust seasoning as necessary. Put the potato skins on a baking sheet. Stuff the mixture back into the potato skins and smooth the top.

7. Bake the meatballs for 15 to 20 minutes (or until the internal temperature of the meatballs reaches about 145° F), and the potatoes for 25 minutes.

Amy January 30, 2014
I've been looking for a new meatball recipe and really wanted to try this one, but ... I cannot understand how any person in this modern age could possibly willingly eat veal knowing exactly how that particular meat is obtained. You should be ashamed for perpetuating its consumption. If you are unaware of its production, look it up. It's not pretty and there is no possible way to obtain humane veal. By its very difinition it is inhumane and abjectly cruel.