Today: So many sweet things are egg-based -- why can't omelets join the party? 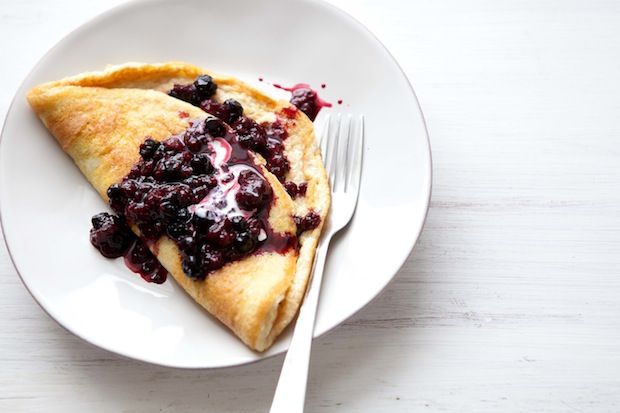 One of my best friends married a man from Finland, and she moved there for several years to teach preschool. Besides the stories of the wonders of the Finnish educational system (hands-on learning! Hours outside everyday! Why am I not a preschooler in Finland?!), I received many reports from her about the foods they were eating. Most of them sounded delicious -- rye pastries filled with rice, cardamom rolls with melted butter, cardamom donuts with a name that sounds like monkey, savory sausages for grilling in the woods (when I went to visit her, I tried them all, and I can attest they were, in fact, delicious). But, when she told me about eating omelets filled with jam, I thought, “An omelet with jam? Yuck. This confirms my suspicion that Finns are the oddest of the Nordic peoples.”

I wished to stay self-satisfiedly biased against the idea of a sweet omelet, except the idea kept niggling at me until I finally had to admit that it wasn’t as odd as it had first sounded. So many sweet things are egg based -- crepes, popovers, Dutch babies, soufflés, custard -- and making a sweet omelet was only a baby step away from all those. So I decided to give it a chance. And, while my favorite omelets will remain those that include cheese and vegetables, sweet omelets with jam or fruit have now earned a place in my breakfast lineup.

I like to make a two-egg omelet -- generous enough to be filling, but not so over-the-top for the morning as a three-egg omelet is. I also like to whisk one of the whites to a foam and fold it in, so the omelet becomes lighter, but not fully so airy as a soufflé (but I whisk in dishwasher-safe bowls so I don’t have to clean the extra bowl!). Raid your freezer for any combination of frozen berries you have, and simmer them briefly with sugar or honey to make a filling that doubles as a sauce. As you might expect, the omelet makes a sweet, eggy backdrop for the syrupy berries, or you can use sliced fruit or jam -- like the Finns. It’s yummy. (But, I still think the Finns are probably the oddest of the Nordic peoples.) 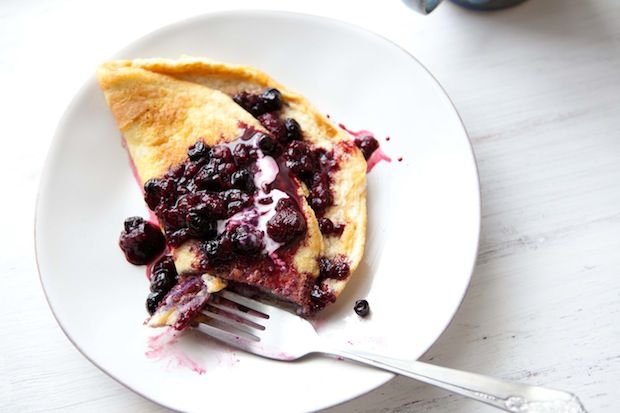 Carrie April 6, 2014
Maybe that is because they are not Nordic. Finns, Estonians and Hungarians belong to a more ancient group along with Hungarian, Estonians and Basque, among others according to my sources

Carrie April 6, 2014
Oops, should have edited that better.

fiveandspice April 6, 2014
I know! It is always so crazy to me that the Finnish language is pretty much not related to any other language besides Estonian, and sort of Hungarian! However, Finns and other Nordic peoples alike would be quick to point out that Finns actually are Nordic, they're just not Scandinavian.

Alice G. April 6, 2014
I saw the title for this and thought "that's so weird" and now I am grinning ear to ear because I couldn't believe how good this was! I thought I was eating a crepe! Do take care when turning it over in the pan- I kinda panicked and tried the assertive pancake flip technique and wound up with a few egg foam puddles on my stove...

fiveandspice April 6, 2014
I have done the same thing when flipping - it's taken me a long time to learn not to panic while flipping things like omelets, crepes, or rosti. :)

Laura G. April 4, 2014
Perfect timing! I've been eating lots of these recently, since I finally got a copy of the Breakfast Book. Much like you, Marion Cunningham suggests the jam filling to go with a puffy omelet, and it's wonderful. I think my favorite filling so far has been apricot jam, but I think orange marmalade is supposed to be more classic.

fiveandspice April 6, 2014
Is there a version in The Breakfast Book?! I'll have to try it. I have the book, but I clearly haven't spent adequate time with it!

fiveandspice April 6, 2014
Yeah, I have seen a wide variety of jam omelets! I guess I think of them as Finnish because that's how I learned of them!

Katie O. April 4, 2014
I am definitely making this! As a kid, I spent a couple of years insisting on eating scrambled eggs with generous salt and a dollop of grape jelly. I thought those years were behind me but I will have to reconsider!

Lavender April 3, 2014
This recipe looks so great! I can't wait to try it! Finns make great combinations, like chocolate and salmiakki, yum!