The History of the Martini 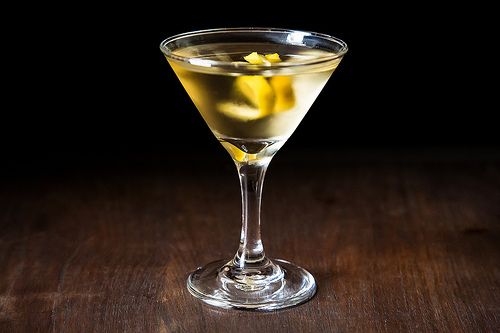 Alongside our recent obsession with artisanally-crafted food lies a similar agenda pertaining to alcohol and cocktails. Bespectacled waistcoated “mixologists” muddle and mash their concoctions, creating original recipes with things like molé-infused bitters and bacon-flavored bourbon. No matter how much Earl grey syrup and hibiscus are swizzled into coupe glasses, though, there are some cocktails that cannot and will not ever go out of style.

The martini, with its basic ingredients and air of refined panache, is one drink that cannot be outshone by the latest trends. From James Bond’s widely recognized “shaken not stirred” endorsement to Ernest Hemingway’s pronouncement in A Farewell to Arms, “I’ve never tasted anything so cool and clean...They make me feel civilized,” this gin-based beverage has been and will continue to be an iconic stalwart of the cocktail lexicon.

Like the dirtiest of martinis, the history of this American drink is more than slightly murky. One prevalent theory points to the town of Martinez, California, where historians and town inhabitants alike claim the drink was invented during the mid-1800s Gold Rush. Apparently, a gold miner who had recently struck it rich decided to celebrate his good fortune at a local bar. He requested Champagne, which they didn’t have, so the bartender insisted on concocting another beverage made from ingredients he had on hand: gin, vermouth, bitters, maraschino liqueur, and a slice of lemon. Thus, “The Martinez Special” was born. The miner so enjoyed the cocktail that he tried to order it again in San Francisco, where, of course, the bartender required instruction in its preparation. The popularity of this sweet, bracing drink spread, and it was first published in the Bartender’s Manual in the 1880s. 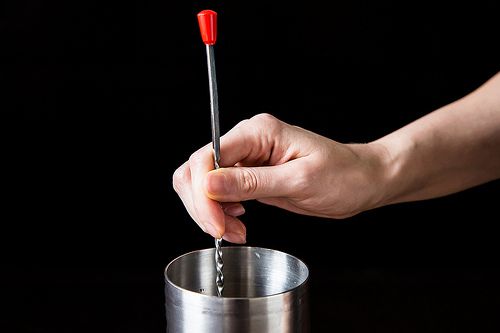 However, this theory isn’t unanimously accepted: Barnaby Conrad III, author of a book on the Martini’s origin, claims that the drink was, in fact, invented in San Francisco, after a miner requested a pick-me-up in the city on his way to Martinez. There are also assertions that it originated in New York’s Knickerbocker Hotel. Still others assert that the drink was named after “Martini & Rossi” vermouth, which was first created in the mid-1800s. Apparently in the interest of brevity, the drink became known as the “Martini.”

The popularity of the Martini never seems to wane, and it was particularly de rigeur during the 1950s and 1960s, when the “three martini lunch” was a widespread practice for cosmopolitan executives and businesspeople. Our societal stance on daytime drinking (not to mention standards of productivity and workplace culture) have changed somewhat since the Mad Men era, and these days the Martini is more commonly consumed in the evening hours...at least on weekdays.

More: Get everything you need for a cocktail party in our Cocktail Party Essentials collection. 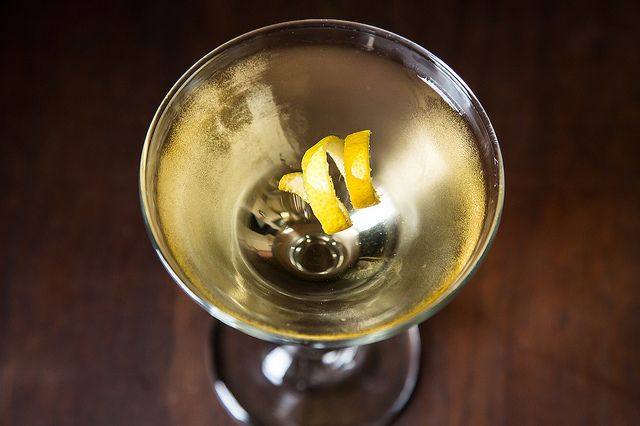 Numerous theories on the cocktail’s origins exist, as do numerous versions and recipes. A traditional martini contains gin and dry vermouth served extremely cold with a green olive or lemon garnish -- the additional ingredients from the earliest version were quickly abandoned. In the Martini’s earliest incarnation, the ratio of gin to vermouth was 1:1, but the amount of gin has steadily increased over the years. These days, the ratios are approached with much subjectivity, and vary according to personal taste. A “dry” martini contains less vermouth, while a “dirty” one includes dashes of olive brine. When vodka replaces the gin, it’s known as a “kangaroo,” and a “Gibson” swaps the olive for a cocktail onion. James Bond favors the “Vesper," made with gin, vodka, and Kina Lillet vermouth, garnished with a twist of lemon peel. A martini “on the rocks” is served over ice as opposed to being strained into a cocktail glass, and “with a twist” refers to the addition of a thin piece of citrus peel, often shaped into a decorative curlicue. As any Bond fan (or person with a modicum of pop culture knowledge) will know, 007’s drink of choice is “shaken, not stirred,” although Martinis are often stirred instead of shaken.

Lately, the practice of attaching the suffix “tini” to a number of cocktails is all too pervasive, particularly among fruity, sweet drinks like “appletinis,” “lycheetinis,” and even the cloying “mochatini.” Many of these drinks have little to do with the original cocktail, but are thus named because of their use of the V-shaped glass, often thought of as a Martini glass.

While we may be at odds regarding its origin, there’s no denying the popularity of this drink, which writer H.L. Mencken referred to as "the only American invention as perfect as the sonnet.”

How do you take your martini? Let us know in the comments!

TI F. January 8, 2022
Love love love the wordsmithing in this article, especially the opening paragraph. I heard the voice of the late Anthony Bourdain when reading it. That laid back expression, words just dancing and forming images in your mind.

Cocktail history is so interesting, especially classics like the Martini. I must admit to being guilty of mixing the Martini up a bit, but would never just add the suffix Tini to a name. Ugh.

For my classic martini, I believe that ice should merely be shown the vermouth and then discarded. So I add a measure of good quality vermouth to ice in a cocktail shaker and then drain. The ice is merely left with the whisper of a kiss of vermouth. To that I add a couple of measures of London Dry Gin and stir. Never shaken. And I'm definitely an olive girl.

Pure L. April 8, 2020
Great article! Love the additional background on the subject of Martinez vs. San Francisco origins (have had heated debates with folks here on the subject). We love a traditional gin martini but have been recently been exploring the "flavored" varieties too. Our current favorite is an espresso martini - Grey Goose vodka, Kahlua and a shot of espresso. Simple yet satisfying.

Ray M. March 22, 2020
Ginraw with Bianco Vermouth or Domaine de Canton, shaken, Up, with a twist

Jake September 24, 2018
Some will say the term “dry martini” actually comes from the original martini containing sweet vermouth and people’s preference waiting towards a martini made with dry vermouth rather than how much vermouth is in the specs of the cocktail.

Percy March 29, 2017
Just now came to this article while doing research for a web series I'm working on. So forgive me for being late to the party. But my personal favorite martini is one of my own invention. Equal parts Brokers gin and Stoli black, stirred in the glass with three drops of olive juice while facing in the general direction of france. Garnish with an olive and call it a day. All that being said, Ive never met a martini I didn't like.

Catherine May 18, 2014
Thank you for this. Always a gin martini, never vodka, definitely dry.

cucina D. May 17, 2014
My husband and I love our martinis very dirty with traditional loves, at least three... dirty ice on the side. Delicious

dymnyno May 16, 2014
A Martini is my summer staple. In the Napa Valley, we love them made with local gin maker, Leslie Rudd's "209" and Vya dry vermouth. One of my own house cured olives finishes the cocktail. (straight up, of course)