Tuna Niçoise and Strawberries with Ricotta 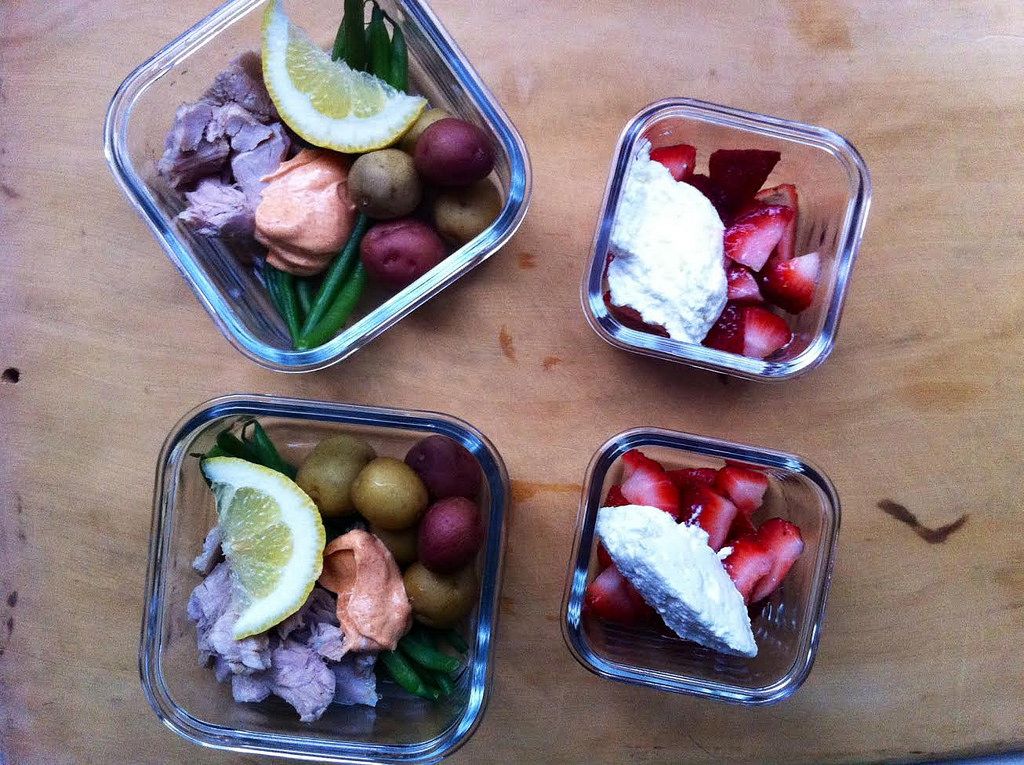 As my kids get older -- they're now 7 -- I've been trying to give their lunches more of a grown-up feel. So today's lunch is tuna Niçoise-ish with poached tuna, haricots verts, and baby potatoes. In the past I may have included a dollop of plain mayonnaise, but now I season it with smoked paprika. And I thought they'd like to squeeze their own lemon juice over the tuna, so I tucked a wedge into each of their lunches. For dessert, I might have packed plain strawberries, but I think they're ready for sliced strawberries tossed with sugar and topped with fresh ricotta.

In case you think this seems like a lot of work, let me break it down for you: I cooked the potatoes and haricots verts in the same pot -- boiling the potatoes until they were almost done, then dropping in the beans for the last 3 minutes. In a pan on the next burner, I poached the tuna, which takes about 10 minutes. And I let both of these cook while we ate dinner, so it really took no extra time -- especially because Tad did the dishes (I'll send him to your house if needed...). I made enough for a couple of lunches, as well as dinner -- tonight, Tad and I will eat the same salad, so two birds and all that.

byb June 19, 2014
The poached tuna truly is a weekly winner it seems like and it's inspiring me to do the same! Do you poach in oil or water or some other liquid? Any words of wisdom?

Amanda H. June 19, 2014
I usually do it in oil (canola oil is fine; I tend to use olive), and I've reduced the amount of oil I use to make it more economical -- I put the tuna in a saucepan where the pieces fit snugly and pour in just enough oil to cover the base of the pan by 1/4-inch. I like using oil because the tuna, herbs, and garlic flavor the oil and then I use that as part of the dressing.

AntoniaJames June 19, 2014
Note to self: keep poached tuna in the fridge for great lunches like this one! I really like how you show how easy it is to make simple ingredients ahead of time for use in future lunches and dinners. I've been cooking like that for 30+ years. I can't imagine doing it any other way. ;o)

ReneeL June 12, 2014
So great! What kind of little containers do you use? Are they glass or plastic? They look like the perfect size.

Amanda H. June 13, 2014
Thanks, ReneeL -- I used lunch cubes like these: http://mightynest.com/shop/reusable-gear/food-containers/leakproof-food-containers/glasslock-glass-square-lunch-cubes-2-pa?gclid=CKfvjNqp-L4CFSUOOgod8UEADw

puttakka June 12, 2014
Lovely! I agree that making lunches can become part of a routine that you hardly notice it!

For example, my lunch today is composed of things I made while making dinner or lunch for my family.

My lunch is: Alice Waters' Chickpea and Broccoli Rabe Soup from Art of Simple Food II, transported in a mason jar to avoid spills (truly a genius recipe - it tastes amazing and requires very few ingredients - she really teaches you to extract the flavor out of ingredients).
A container of steamed brown rice and snap peas from Mon&Tues night's dinner - I'll mike it and douse it with soy sauce and sesame oil.
Are you ladies aware of Makiko Itoh's fabulous "Just Bento" cookbook? She focuses on simple but incredibly flavorable Japanese and Western "staples" that you can make & freeze and also gives you tips on how to organize everything. That is a GENIUS book.

Amanda H. June 13, 2014
I don't know this book -- will look it up! And like the sound of the Chickpea and Broccoli Rabe Soup; I have the book so will check it out. Thanks!