Today: You no longer need to perfectly flip your pancakes. Just tear them to shreds instead. 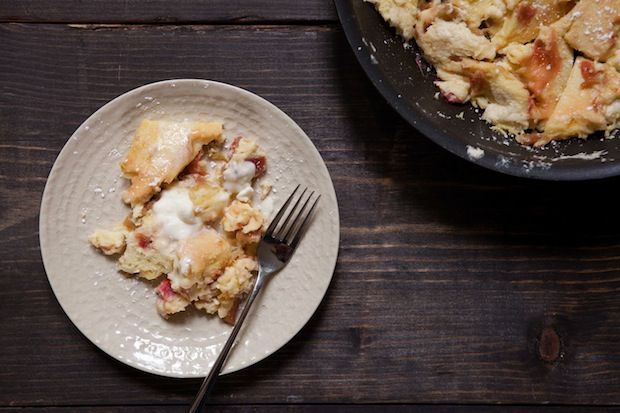 I grew up eating Norwegian pancakes, not American pancakes -- these are large and thin, a bit like eggy crêpes. For many years, I tore all of mine to bits in the process of trying to flip them in the pan. I devised this absurd three-spatula system to get enough control to flip a pancake, but it would still usually fall to pieces. Time and practice eventually worked their magic, and I can now flip a Norwegian pancake without any brouhaha. But my pulse still speeds up, just a bit, with each flip.

More: Looking for a pancake you don't need to flip? Try this oven version from David Eyre.

Imagine my surprise and joy and cries of Hey, that’s not fair! when I discovered Kaiserschmarrn, an Austrian pancake that you are actually supposed to shred to bits. Kaiserschmarrn are sweet, fluffy pancakes, traditionally stuffed with rum-soaked raisins. Not only is it okay to break one as you flip it, but you can then go to town on it with a fork and purposefully pull it into bite-sized chunks. It looks like a mess, but it tastes delicious, and you can smother the mess with powdered sugar, or compote, or whipped cream -- or, if you really know what you’re doing, all of the above -- so who cares what it looks like?

More: Whip your cream ahead of time, thanks to this tip from Alice Medrich. 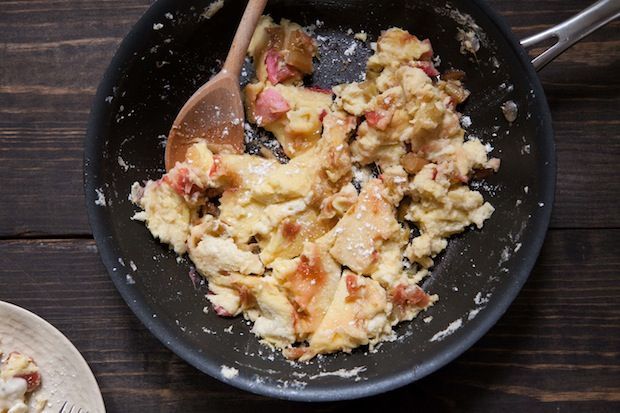 There are a number of stories about the origins of Kaiserschmarrn, but I secretly think it must have been a cook for the Kaiser (emperor) who screwed up flipping a batch of pancakes and decided to cover his behind by saying that’s what it was supposed to be like. I applaud him. And having tried Kaiserschmarrn, I agree: Bite-sized pieces are highly satisfying.

Our rhubarb plants are currently threatening to take over the entire backyard (and I just might let them), which has driven me to put rhubarb in everything. This includes Kaiserschmarrn, where swathing caramelized pieces of rhubarb in the batter leads to tart, warm pockets of jam that dot the sturdy pancake. It’s a delightful warm-weather alternative to the traditional rum raisins.

Droplet June 30, 2014
I like how well the textures match. Sometimes I don't quite know what to make of rhubarb compote and it is in a good company here. Some sliced almonds would be a nice addition.
Author Comment

fiveandspice July 7, 2014
That is a great suggestion. Sliced almonds would be lovely.

Fairmount_market June 28, 2014
Oh, I love Kaiserschmarrn, but I've never thought to make them! What a nice idea to add rhubarb.
Author Comment

fiveandspice July 7, 2014
Thanks! I loved it with the rhubarb.

the T. June 26, 2014
This is not unlike something mom used to make that she call (using your spelling) schmarrna. We always used to dump raspberry jelly (homemade) on it. Mom grew up a farm girl in Slovenia, and I figure that was something the Austro-Hungarian must have left behind.
Author Comment