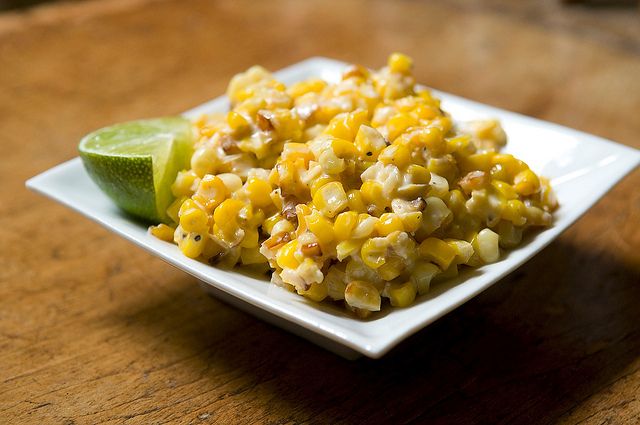 A few weeks ago, Amanda and I had dinner with friends at Market Table, a restaurant in the West Village with a strong focus on seasonal, local ingredients. I was fortunate enough to order what ended up being the star dish of the night: a riff on elote, the ever-more-popular Mexican version of corn on the cob typically involving lime, chili, mayo, cheese and a grill. This incarnation was served off the cob and piled high on a small plate -- it was creamy, tangy, spicy and sweet all at once.

After Amanda and I had each sampled a few forkfuls, we looked at each other and said in unison: "Cooking from every angle!" (This happens more than occasionally, by the way.) So, here it is: my best attempt at recreating Market Table's lovely, nuanced corn dish. Because I was impatient and didn't feel like waiting for the grill to heat up, I pinched Andrew Feinberg's technique of roasting the corn kernels off the cob, and I think it works really well here.

1. Heat the oven to 400 degrees. Shuck the corn and cut the kernels from the cobs, tossing them in a bowl with the olive oil and plenty of salt and pepper. Spread the kernels evenly on a large rimmed baking sheet and roast for 15 to 20 minutes, scraping and turning over the kernels once or twice, until they’re tender and lightly caramelized.

2. Put the corn back into the bowl and stir in the mayonnaise, sour cream, milk, lime juice, Parmesan and cayenne. Taste and adjust any of the flavorings, including salt and pepper, if necessary. (If the corn is at all sticky, just add some more milk.) Serve immediately, with lime wedges, while still warm.

Greg G. November 25, 2014
This is an easy-to-make and delicious side dish. Your guest will enjoy it's simplicity. Made it twice for difference event, it was a hit twice.

Luisa W. September 17, 2010
So, I live in Germany where corn on the cob is pretty much impossible to find as Germans cultivate corn for feed and not for human consumption. Do you think it's worth trying this with frozen or canned corn? I assume frozen would be better? It sounds so so so amazingly delicious.

phyllis September 17, 2010
Yes, frozen corn would be tastier than tinned.

Merrill S. September 14, 2010
Will have it up in the recipe database soon!

CookwithJennifer September 5, 2010
Sounds delish! My family loves Mexican Corn on the Cob as well as sauteed fresh corn. This sounds like the perfect combination of both. Can't wait to give it a try! Thanks for sharing!

MexicoKaren September 5, 2010
Thanks for this great recipe. I live in Mexico and love this combo of flavors. Most of the street vendors in our area do offer this delicious treat cut from the cob, in a paper cup. I will try this recipe, however, with the sweeter and more tender frozen corn we can buy at the supermarket. I'll also use the ground chiles that are ubiquitous here, instead of cayenne. The frozen corn may not roast as well, but I'll give it a go....

Merrill S. September 5, 2010
You're welcome! And I didn't know it was served off the cob in Mexico -- thanks for sharing.

phyllis September 5, 2010
I'm having a bbq next week, and will serve this using expensive sweet frozen corn (white and yellow kernels). Sounds so, so delicious.

Emmastia September 5, 2010
This would be great with radishes in it too - I made a great lime, corn, radish salad a ton last summer.

TheWimpyVegetarian September 5, 2010
GREAT idea. I'm doing this the next time I make this!!

MB C. September 4, 2010
I made this tonight. Love, love, LOVED it!!! My partner loathes mayonaisse and sour cream and absolutely devoured it. The taste was just fantastic. We paired it with filet mignon and a robust California ab. Brilliant. Will be sharing this recipe with many others, and will definitely make it again. Thank you!

Kerrilynn September 4, 2010
We're just about to sit down to almost the exact same meal!

Kerrilynn September 4, 2010
Making this right now and can't get over how heavenly the house smells just from roasting the corn. Steak and tomato salad and it's summer here still!

wanderash September 1, 2010
I scoop up this Mexican street snack every time i see someone selling it on the corner. I bet it is REALLY good with sweet corn. Can you believe, in the Land of Corn (Mexico), you can only find a starchy non-sweet variety of corn?

TheWimpyVegetarian August 31, 2010
I can't wait to make this!

TheWimpyVegetarian September 1, 2010
I will!!

TheWimpyVegetarian September 3, 2010
Made this with some ribs for dinner tonight. Both my husband and I really liked them! YUM!

dymnyno August 31, 2010
I make the Mexican street version which is delicious...I love the sound of this one because it is more suited to fork and plate fine dining!