Lefse for Breakfast (or Anytime!) 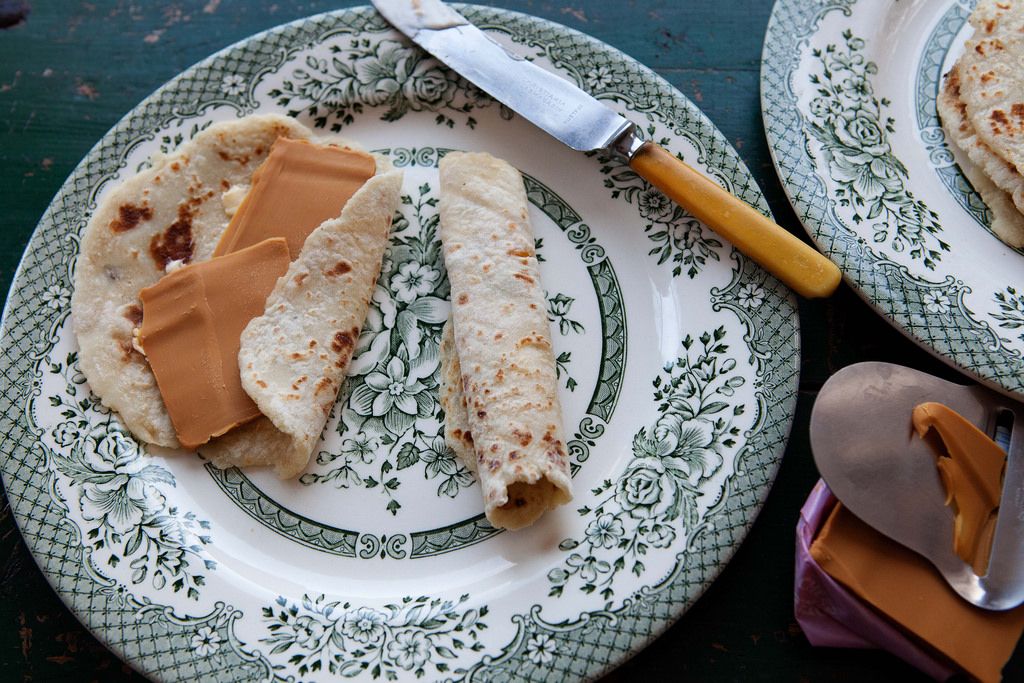 Lefse appears to be having a moment right now, between a video with Sam Sifton and Molly Yeh and a spread next to shots of beautiful Norwegians eating in snowy woods in the December issue of Bon Appétit magazine. But in case you missed those and don’t know what lefse is, I’ll bring you up to speed: It’s a soft, Norwegian potato flatbread. Lefse is sometimes called a potato crêpe because it’s a giant, paper-thin round usually served spread with butter and cinnamon-sugar and eaten as a dessert.

Except, that is, when it isn’t. Here’s a fun fact that most people don’t know: The large, thin-style of potato lefse brought over to the United States by Norwegian immigrants is just one of many styles of lefse. Historically, there were as many styles of lefse in Norway as there are fjords and valleys. Some lefse were made with rye flour, some oat, some wheat, some potato, some a mix of flours. Some were fried on a griddle while others were baked. Some were thick and folded in thirds while others were thin and rolled. 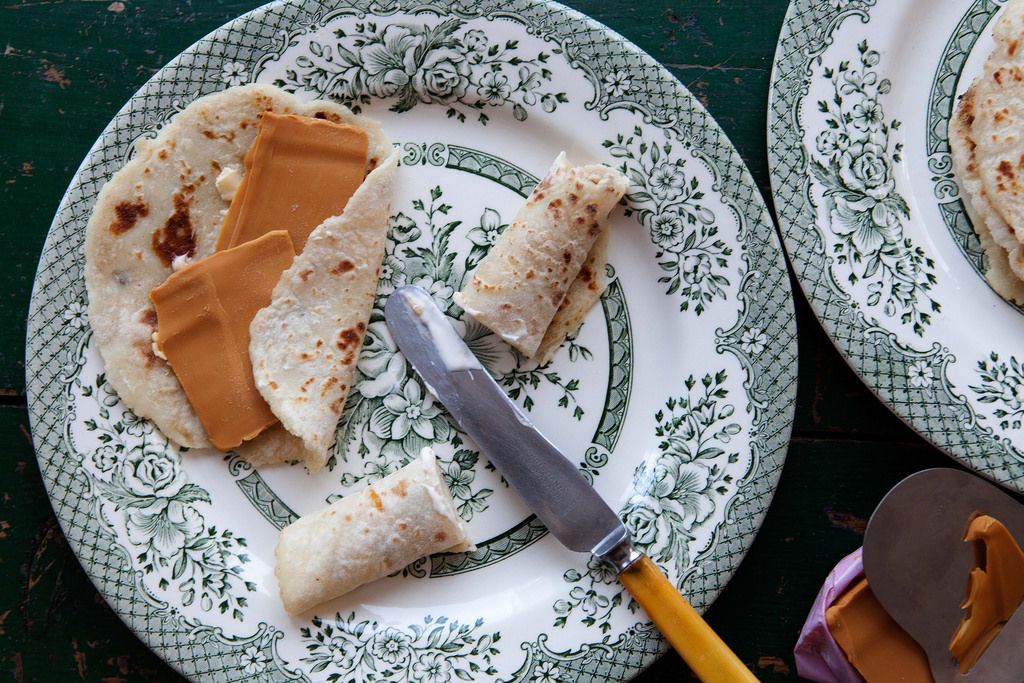 Before our neighbor taught us to make our own, my family would buy pre-packaged lefse called lompe, which are small and thick. You would find them sold at any grocery store in Norway, as you would a stack of tortillas here, and we’d eat it rolled around a hot dog. Though lompe is not generally considered a breakfast food, it makes a fantastically soft, chewy, and flavorful flatbread for topping with breakfast-y foods and spreads. And, unlike the larger, more delicate potato lefse, you don’t need any special equipment to make lompe.

You make a base of creamy mashed potatoes and let it refrigerate overnight. You then work in enough flour to make a dough, roll it into small rounds and fry it in a dry skillet (like a tortilla, again), until browned on each side. Its buttery potato flavor can skew sweet or savory, leaving you any number of options for topping. My favorite toppings are either scrambled eggs and lox or butter and gjetost (Norwegian goat cheese). But, I’ve been known to also top a lompe with pâté, or cream cheese and jam, or -- if no one’s looking -- go the butter and sugar route -- even at breakfast. 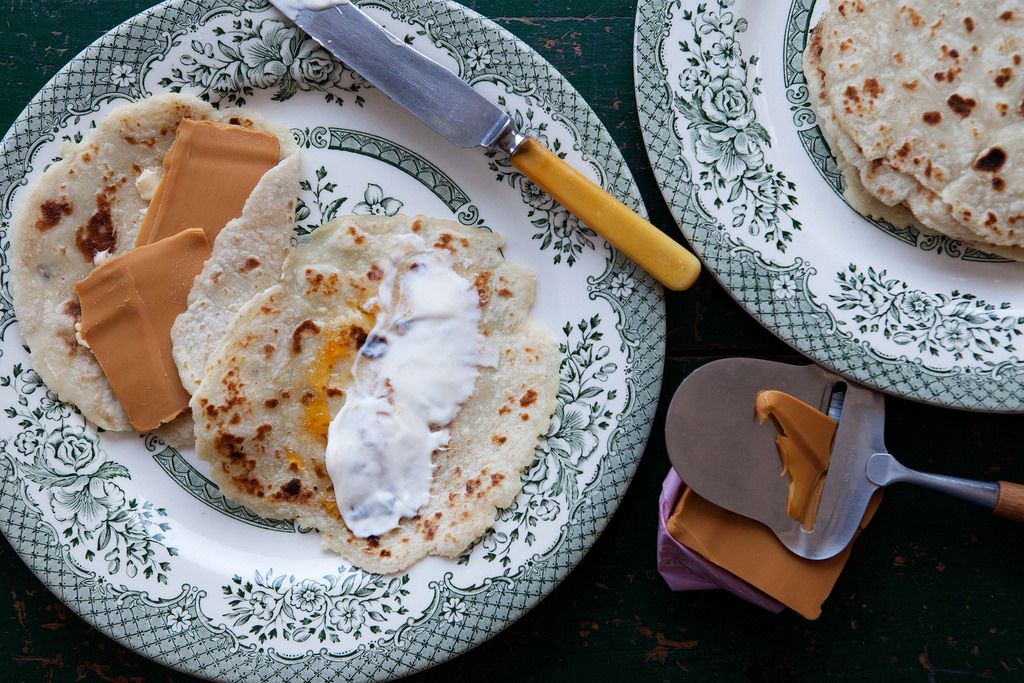 Heidi E. December 20, 2015
My maternal grandmother made milk lefse. She mixed up many, many batches and mailed them out at Christmas time to her six children and their families. It did not contain potato at all. Several years ago, one of my cousins was in Norway and got to talking with several local women who recognized the recipe and said it was known as Christmas Lefse.

Cynthia M. February 6, 2015
My grandparents were from Norway. They taught me how to make excellent lefse without all the specialty equipment. Ingredients are mashed potatoes from either russets or reds, brought to room temp and put through a ricer, and just enough flour to hold the dough together. Nothing more. Roll as thin as possible and grill in heavy fry pan until lightly browned on each side. I do plan to try your recipe, though! Butter and lingonberries is a superb topping for lefse. The best lingonberries ($7-$10 per jar) are found in the jam aisle of upscale markets. Passable lingonberries ($3 per jar) can be found at IKEA.

walkie74 February 6, 2015
So the peanut butter looking stuff in the picture is...cheese?

fiveandspice February 6, 2015
Yup, what EmFraiche said. Although, if you want to be really technical it's actually caramelized whey. The stuff in the picture is made from a combination of goat's and cow's milk, and is kind of sweet and caramelly combined with sharp and funky. The 100% goat's milk whey version is much more potent and a bit less creamy.

Kerry February 5, 2015
These sound like potato scones from Scotland! We serve them fried with breakfast or just toasted and buttered. Practically a national delicacy here to ;-)

Mar P. February 5, 2015
What is the caramel colored thing being sliced over the Lefse…?

fiveandspice February 6, 2015
Yup, what EmFraiche said. Although, if you want to be really technical it's actually caramelized whey. The stuff in the picture is made from a combination of goat's and cow's milk, and is kind of sweet and caramelly combined with sharp and funky. The 100% goat's milk whey version is much more potent and a bit less creamy.

Bethany B. February 5, 2015
I was just having lunch with my North Dakota-native coworkers today, and you should have seen the looks of horror when lefse with peanut butter was mentioned! They would probably be appalled by your topping assortment, but I think it looks scrumptious!

EmFraiche February 5, 2015
Yuuuum lefse! Butter and sugar is a great combo with lefse, and I think it's pretty common in Norway as well. If you ever get a chance to try ekte gjetost, I highly recommend it. It's made 100% of goat milk, is much darker in color, grainier in texture, and tangier in flavor than the ski queen gjetost. The ekte gjetost my SO brings back from Norway is killer, but we haven't been able to find its equivalent in the states.

fiveandspice February 6, 2015
Yes, I love ekte gjetost also. Although, even in Norway we still tend to get the mixed cow and goat version, most of my family just likes it better. But, I do love the strong flavors of the goat milk gjetost. I've actually found it in one of our grocery stores up here in Northern Minnesota - it's a very Scando community on the whole here :).

molly Y. February 5, 2015
ONE THOUSAND TIMES YES!!! also lefse around a hot dog just became my new favorite thing and i haven't even tried it yet.

fiveandspice February 5, 2015
It's one of the best things IN THE WHOLE WORLD. *Especially* if you add fried crispy onions or shallots...