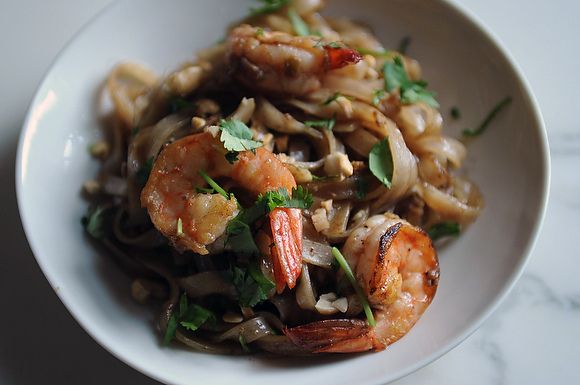 Not very far from my new house, there is the sort of Thai restaurant that is known to all of you. It’s not very good, I’d go as far to say mediocre: point of fact, it serves sushi at happy hour. But we often stop by, largely because it is there. The incipient pescatarian also likes their pad thai, her first real introduction to the dish, and gets it with tofu, which pleases me since I find her diet too often short on protein.

This got me thinking: could I make a weeknight version of the dish itself? I sought the answer through mtlabor's Shrimp Pad Thai. I came at this dish not knowing if I could cobble together the ingredients on the fly, and was pleasantly surprised.

First, I printed the recipe out at work, discovered by a colleague who found it trapped between pages of a lengthy redacted security document he had been printing, and who handed my recipe to me with a mild sneer, and asked if I had used the Freedom of Information Act to acquire it. Never mind him.

I stopped off at Whole Foods on the way home, which had tofu, of course, which I would be using instead of shrimp and to my delight, tamarind concentrate, and the thick rice noodles. Then it was a race home to beat the kids, who were coming from soccer practice, to get the whole thing going.

Let me reorder the directions of the recipe a bit for you, just to get the full blast of weeknight simplicity. First, get those noodles soaking right away, before you kick your shoes off, and maybe (unless you’ve spent your day having long conversations with your superiors/clients/stove repair company/random office crazy person) before you open your beer. Next, get your oil going, and toss on your protein of choice. While that is cooking up, mix up your sauce. You can crack that egg and get it scrambled at some point, but if you want to do it right into the pan I’m not going to make a stink.

Pretty soon, 20 minutes will have passed, your family may or may not be home and it will be time to toss those noodles on and polish this baby off. I skipped the peanuts, because my children don’t like them, and put the cilantro only on the adult dishes, at their request. I should mention that Amanda tasted the photographed version of this dish and thought the fish sauce should be brought down a tablespoon -- I think this depends a little on your taste, as the amount called for worked fine for me. She recommends a squeeze of lime to finish it, which I agree with.

“Wow mom, this is actually really good,” the incipient pescatarian declared, in the way that kids who can’t believe restaurant food can actually be recreated at home sometimes do. Really the whole thing took 30 minutes, which is faster than just about anything else besides pasta for a weeknight meal.

I will close by acknowledging that this is certainly not the most authentic pad thai recipe around, and it skips on some ingredients I have seen listed in other recipes. But mtlabor seems to understand that, while you might be short on radishes or banana flowers or bean sprouts, that should not prevent you from enjoying a great weeknight version of a dish you love, hot off your stove, not from that restaurant you could take or leave.

1. In a small bowl, combine the fish sauce, rice vinegar, sugar, 2 tablespoons oil, and tamarind concentrate. Stir until sugar is dissolved and set aside.

2. Soak the rice noodles in hot tap water for about 20 minutes, or until they start to soften but not fully tender. Drain and set aside.

3. Beat the eggs with a pinch of salt in a small bowl and set aside. (There's lots of things to set aside, aren't there? Makes it easier in the end because the cooking of this dish is fairly quick)

5. Add remaining 1 tablespoon of oil to skillet. Add garlic, shallot, and jalapeno. Cook over medium heat and stir continuously for about 1 minute. Add eggs to skillet and stir vigorously with a wooden spoon until scrambled, about 30 seconds. Add the egg noodles and toss with tongs to combine. Pour the tamarind/fish sauce mixture over the noodles and increase the heat to high, continuing to toss the ingredients with the sauce.

6. Add 1/2 of the chopped peanuts and cooked shrimp. Toss noodles for about 2 more minutes.

7. Dish out onto hot plates and top with remaining peanuts and garnish with cilantro.

Arlene G. May 8, 2014
Do I just triple the recipe if i want to make this for 6 people? I tried doing this and felt that some ingredients were overpowering, it did not taste as good as just making it for 2.

damson November 27, 2010
I have made this twice, and the third time is tonight, this time with leftover turkey (of course!), and slivered green beans tossed in before the eggs. I love it, my kids love it, and the ease of it all is wonderful. And oh, your ginger cookies look yummy!

calendargirl November 2, 2010
We just polished this off this evening -- scrumptious! My skeptical teenager, wary of homemade versions of things she first encountered in a restaurant, ate three times her usual amount. This is ever so much better, and in my opinion bests 4912's version (love almost anything they do with eggplant, tho'), which we had the other night. Appreciate your writing here AND in the Times.

Janetxb October 31, 2010
I just started reading this site, and am enjoying it ever so much. Thanks for the great work!

MelKettle October 31, 2010
Looks sensational - sadly hubby is allergic to shrimp, so I would use chicken. Will add it to the quick week-night dinner list. Thanks!

Sagegreen October 26, 2010
Thanks for discovering this recipe! As a big fan of Thai food, we only have a few places in the area where we can order take out. Since all my Thai recipes got lost during a big move last year, I have not gotten back to replacing any yet. Thanks for helping with that process.

AntoniaJames October 25, 2010
By the way, I agree with Amanda that the full amount of fish sauce is a bit much. It depends on what brand of fish sauce you use, I suppose. But making this the first time, especially for kids who might not be all that adventurous, I'd definitely reduce the fish sauce. Good call, Amanda. ;o)

Kelsey B. October 25, 2010
This sounds awesome, thanks for pointing it out, I've never tried Pad Thai at home. Now I will!

drbabs October 25, 2010
Ah...my Monday is complete. Thanks for sharing another great recipe and your wonderful writing. (We had your chili for dinner tonight!)

Jestei October 25, 2010
i made the chili this weekend with dark turkey meat and i think i like that best. hope your pad thai is wonderful post any tips!

stilltrying October 25, 2010
Is Tamarind concentrate the same as tamarind paste?

AntoniaJames October 25, 2010
I've made this several times (when the boys were home this summer) and love it. I use tamarind "paste" (also known as "wet pulp"), not concentrate, and it works just as well. See the comments with the original recipe for more details about that. So glad Jenny tried and liked this one. It's a thousand times better than your typical carryout. Ironically, it doesn't take much longer than ordering and picking up (at least for us, where we'd have to drive five minutes, find a parking place, etc.). ;o)

Jestei October 25, 2010
yes i feel the same way. and yes people you can use the paste just break it down a bit.

mrslarkin October 25, 2010
Sounds yummy! Thanks, Jenny and mtlabor, for another keeper.

Jestei October 25, 2010
aw thanks!! the tofu will depend a little on the firmness you choose but i did firm (not extra firm) for about four minutes and it was fine.

gingerroot October 25, 2010
I also love Pad Thai, but love your posts even more. I'll admit I'm a little late to the game in terms of anticipating a great recipe and big smile every Monday, but I'm catching on. Thanks, Jenny!

Kitchen B. October 25, 2010
We love Pad Thai - I haven't made it in ages...you now have my juices flowing again! Thanks Jenny

Jestei October 25, 2010
knowing you kitchen b you'll find a way to make it even more exciting!

Kitchen B. October 29, 2010
So I made this on the very same evening. Daughter #1 who'd had dinner just had to have some more........I think the Jalapeno is the difference - a way to introduce heat which I love yet maintain the sweet, sour and salty. Thanks for bringing great recipes to the fore. I'm onto the kedgeree next!