Inspired by conversations on the FOOD52 Hotline, we're sharing tips and tricks that make navigating all of our kitchens easier and more fun. Today we're discussing what to do with a styrofoam box of century eggs.

Today: Get a whiff of this Chinese delicacy, the century egg, and find out what it is and what to do with it. 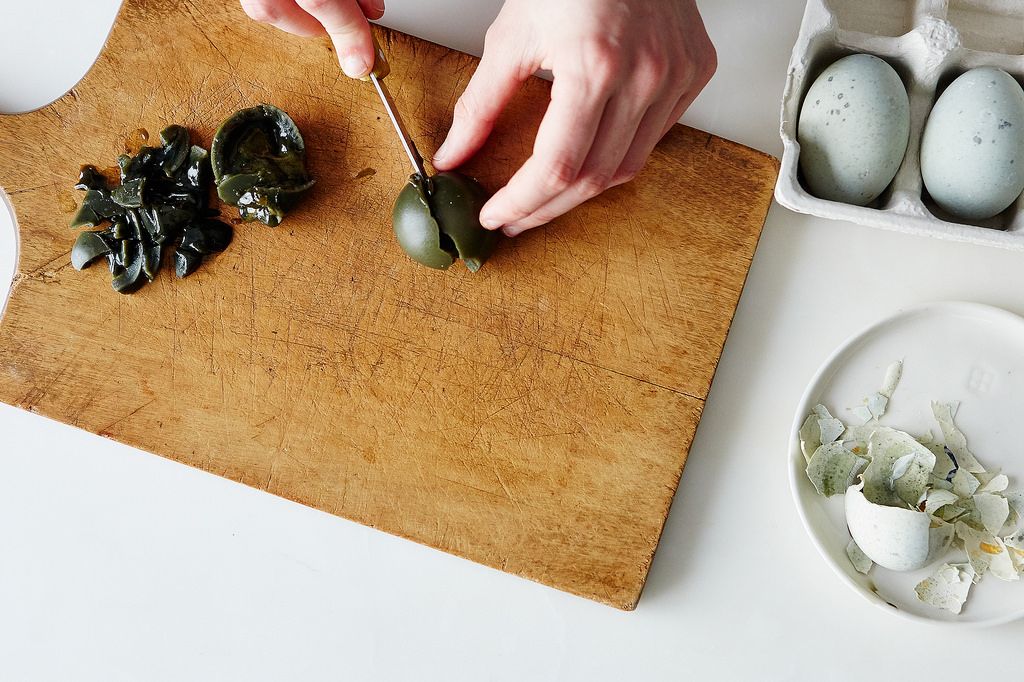 First thing's first: What exactly is it?

The pídàn (pronounced peeh? daen!) is a preserved egg that goes by century egg, hundred-year, or thousand-year egg in English—it's very loved in Chinese cuisine. It's a chicken or duck (or sometimes quail) egg that has been preserved in a mixture of quicklime, salt, and ash, then coated in rice chaff. Over the course of three months, the eggs absorb sodium, which denaturizes the proteins within. In non-scientific language, that means the formerly clear whites turn solid and become an opaque brown-black. That's right: It doesn't take a thousand years or even one hundred to preserve the eggs—it only takes a few months. (What we then want to know is what the story behind their English names is; if you know, we'd love to hear in the comments!)

The moment you crack a century egg open, it's not hard to see why the uninitiated might get a little queasy. The smell, pungent and sulfurous, is not one for the timorous eater. Slice it open and find grey-green, sometimes slightly gloopy yolks. Yet there's a strange beauty to the eggs, with the striking patterns of salt crystals sprawled across clear black jelly. The taste and texture is like nothing you've eaten before; an elastic gelatin texture to the whites contrasts with the rich custard cream of the yolk, and it's all enveloped by a slightly sharp funk. 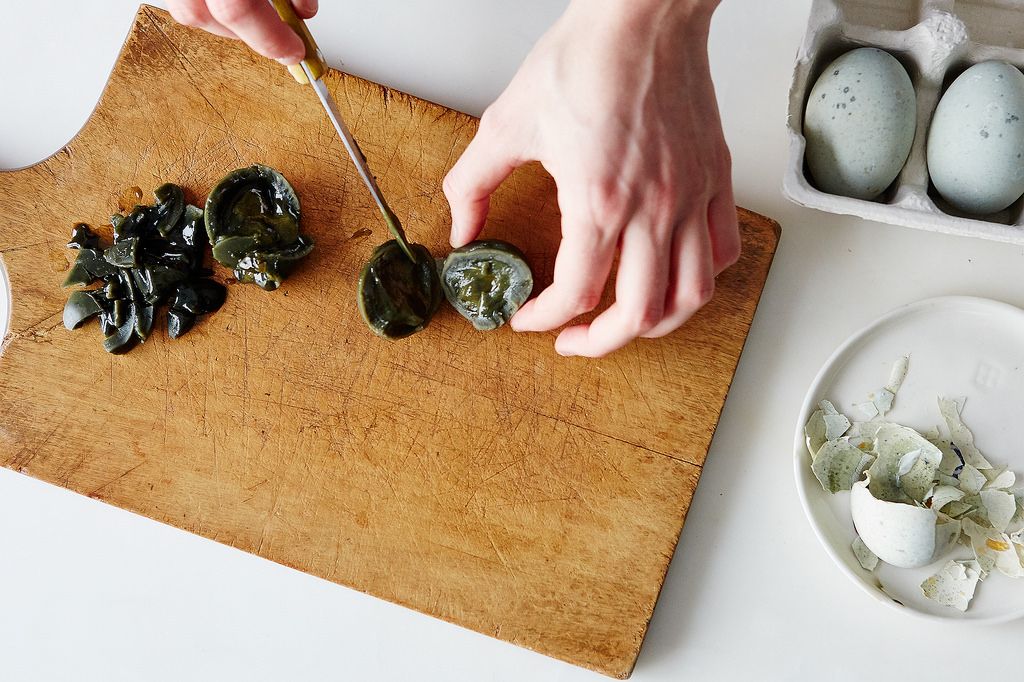 You can find these, often in packs of four or six, in most Asian supermarkets or specialty stores. Since they've been preserved—usually in some mixture of lime and salt—they'll probably be sitting around on a shelf, unrefrigerated. They may also go by song hua dan, or pine flower egg, named after the salt patterns. (Isn't that lovely?) The eggs will keep for several months in the pantry, and hypothetically indefinitely if refrigerated.

How to eat it:

Dress it up: A common way to enjoy the egg is with a simple egg and tofu salad. Chop it up and add it on top of or mixed into a bowl of cold silken tofu, stirred together with a dressing of soy sauce, aged rice vinegar, sesame oil, and minced garlic. Shred some vegetables, if that's what you're feeling like. Finish the dish off with a sprinkle of chopped chives and cilantro. The egg holds its own among the other strong flavors, and the chewy pídàn plays well with the melting softness of the tofu. If you're feeling more comfortable with the flavor, skip the tofu and enjoy quarters of the egg simply mixed with the same dressing.

Heat it up: Diced, the century egg adds a little extra chew to slightly spicy vegetarian ma po tofu. The spiciness distracts from the strong flavor, allowing you to fully enjoy the creaminess of the yolk and the unique give of the whites. Century egg meshes well with pork as well, so try tossing small tidbits into a braised pork and rice dish. 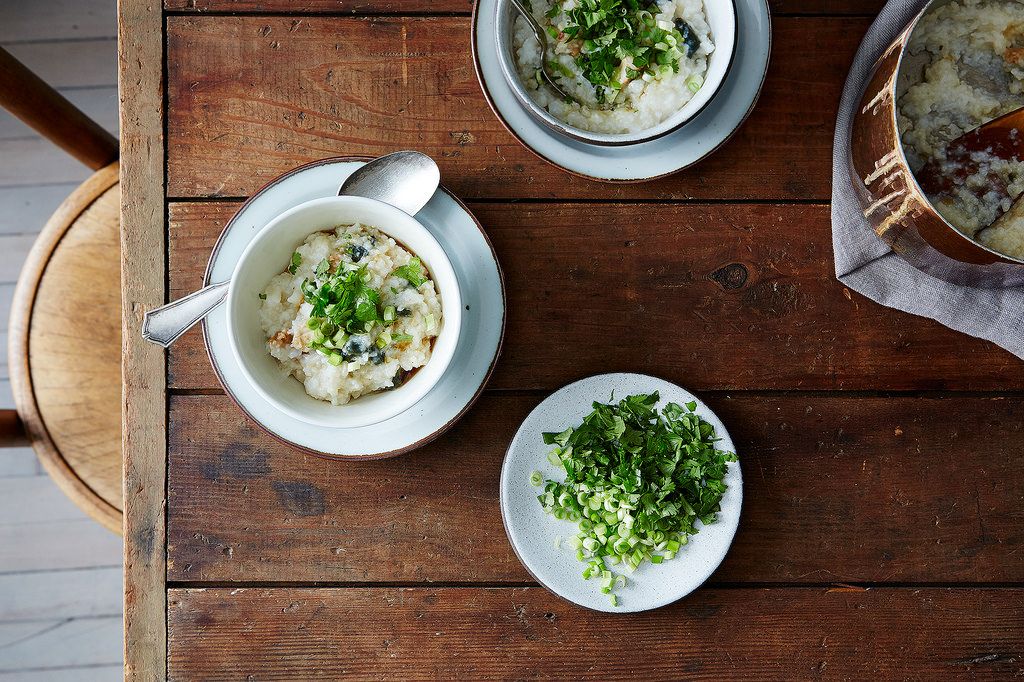 Top your congee: For a simple way to enjoy century eggs without too many distracting flavors, top a bowl of soothing congee with wedges of egg, drizzled with fragrant sesame oil or perhaps a few tufts of pork floss (fluffy, slightly sweet dried pork). Another easy dish, and a breakfast favorite, is century egg and pork congee. The broth takes the edge off of the egg for a mellow, hearty meal.

Have you ever tried century eggs? What recipes do you like to use them in?

cyssf August 20, 2022
As a child my mother would quarter them and serve it with pickled ginger and scallions with a drizzle of sesame seed oil and oyster sauce. I still make it this way for myself since I love peedan but no one else in my household will eat them. At the local Taiwan snack restaurant here in SF, they serve it over chilled slice tofu, diced peedan, and a very garlicky sauce and fried shallots. Of course, whenever there is a leftover Costco roast chicken or a turkey frame I make jook (congee) in my Instant Pot and dice peedan into it.

paizley February 3, 2018
I quarter the eggs and let them rest in a marinade of rice vinegar, fish sauce, soy sauce, seasonings, etc. Never do it the same way twice. Then I eat as is or with some hot rice. Love these! I have some pickling lime ao might try to preserve some chicken eggs. Not as expensive as fresh duck eggs. Also might just peel 6 of them and pickle them whole to see how they turn out. Could become a new "bar" snack! LOL!

Becca (. January 18, 2018
Hello! Odd question- my ducks have started laying, and I'm actually interested in making century eggs. Any ideas on whose recipes I should trust?

Aileen M. July 16, 2018
I'm going to try this one! https://www.silkroadgourmet.com/making-1000-year-eggs/
This video gives a good visual, if you can make it through the rather laden banter from the hosts. http://www.cooksmart.com/free-recipe/video/how-to-make-century-eggs-518456030

Karen M. April 27, 2017
Love them, like to make "steamed 3 kinds of eggs" with these, salted egg & regular chicken eggs. Pure comfort food! Like them in jook too or with tofu as a warm weather sort of salad.

travelbyrecipe April 26, 2017
I am not adverse to trying these eggs. One egg I can't bring myself to eat is the egg with am immature duckling inside. I see both eggs at the market in Houston. I am not Asian, I have a penchant for Asian foods...except for organs and duck eggs!

Linda A. December 18, 2016
While we were young brats growing up, my siblings and I simply called them ROTTEN EGGS, much to my mom's dislike. LOL! But oh so smelly and tasty, like 5-socks French cheese.

louie October 30, 2016
'Century' comes from the 100 days (three months) that the eggs are preserved for. We normally hear 'century' as referring to a period of 100 years but a century can be 100 of anything.

Rosie May 22, 2015
I usually have them in congee or broth (with cilantro for hot pot). Sometimes, I eat them with pickled ginger too!

Leany May 17, 2015
Common dish in penang is steamed like in Japanese chawan mushi..chopped up century and salted eggs with normal chicken eggs and stock

Kadee May 14, 2015
in Taiwan and in Utah the egg white is a dark translucent green and the yolk is dark red. Are the using something else to pickle them? The told me in Taiwan in the old days they used horse urine?

Mu Y. May 13, 2015
I think I want to try this version
http://carolynjphillips.blogspot.com/2011/08/elegy-to-preserved-egg-plus-warning-on.html

HalfPint May 12, 2015
Unabashedly love these eggs. All they need is a drizzle of soy sauce and hot sauce. Heaven!

SJ May 12, 2015
They way I was brought up on eating these was with pickled scallions. That helps with the gooey yolk funk.