A Gray Ice Cream That's Anything But Drab

Today: The case for loving a dessert that looks like wet concrete. 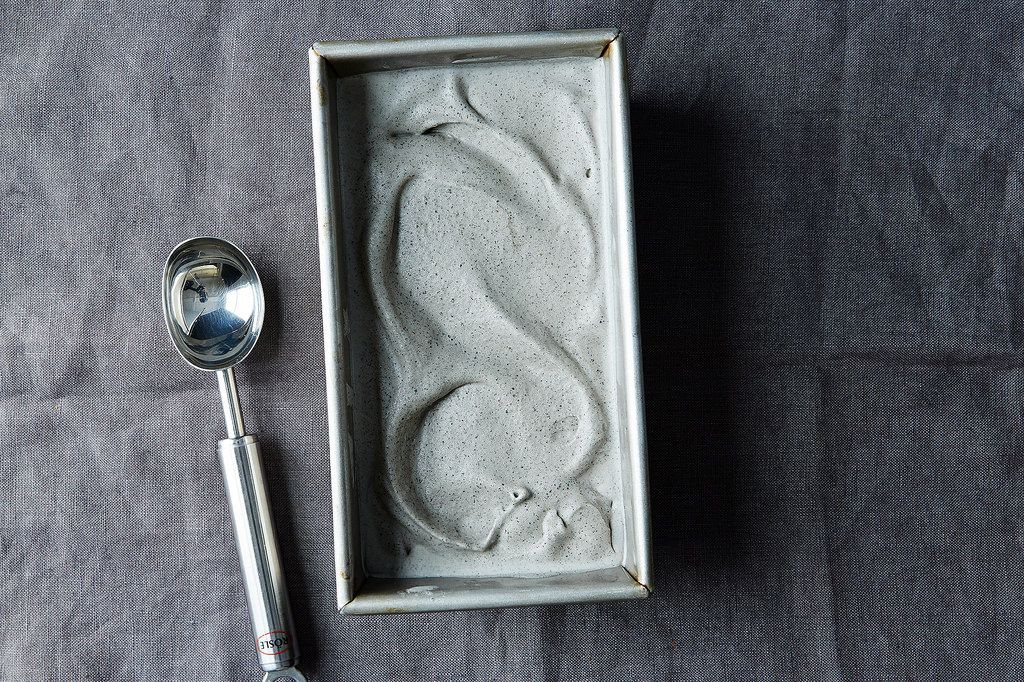 I don’t like smothering winter squash in brown sugar, and you will never catch me putting marshmallows on my sweet potatoes. I like fruits and vegetables to stand as they are, not disappear under a veil of cloying sweetness. This holds true for desserts just as much as it does produce, which is why I felt right at home in Japan—well, as far as desserts go anyway.

The average Japanese palate is accustomed to far less sugar in their sweets than we are: A run-of-the-mill (i.e. not one sprinkled with fancy flaky salt) American cookie or slice of cake is likely to elicit murmurs of ama sugi (too sweet) or “American taste.” (Not surprisingly, some of our technicolored candies elicit a number of less than complimentary comments as well, but I digress.)

I like sweets with red bean paste and I love anything with matcha in it, but my Japanese dessert soulmate is anything of the black sesame-flavored variety (and I’m not the only member of the Food52 team that’s fallen under its spell). Like white sesame seeds, black sesame seeds have a pleasant nutty flavor, but taste again and you’ll see they’re a little bolder and more assertive. It’s like watching the quiet guy next door stand up to a neighborhood bully and realizing there’s more depth there than you thought. 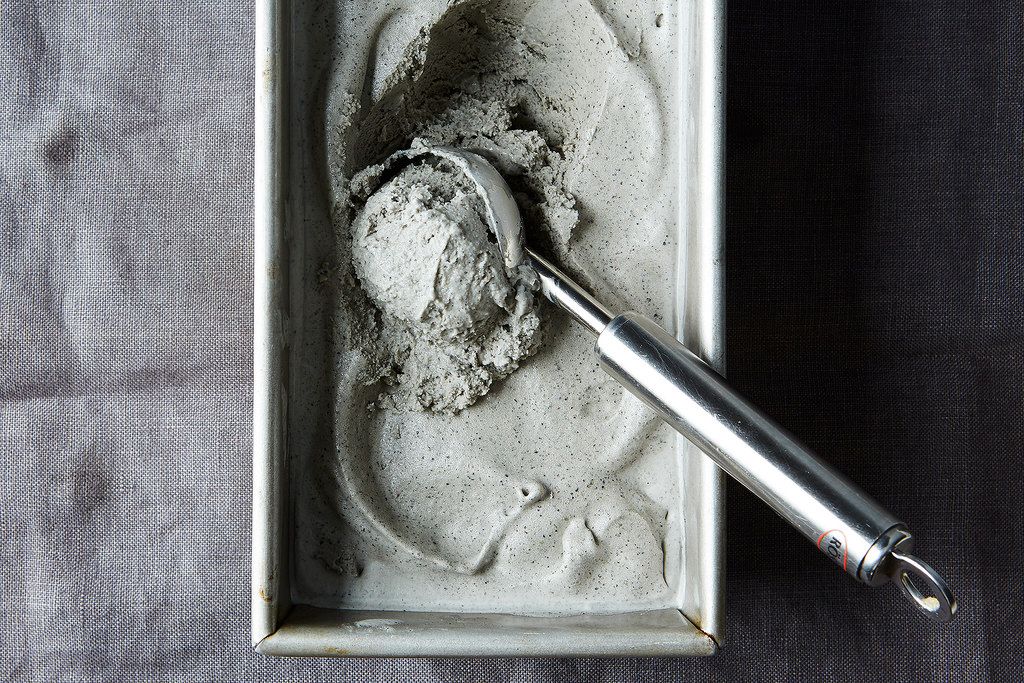 If forced to choose one black-sesame-studded gray dessert, I’d admit my predilection for black sesame seed soft-serve (known as soft cream in Japan). Soft-serve shops are almost as prevalent in Japan as are their famed vending machines, so it was easy to feed my addiction wherever my family and I traveled. Visit a shrine, eat soft serve; feed sacred deer, eat soft serve. And yes, you can get vanilla, chocolate, or strawberry, but why would you when you can get soy milk, grape, kabocha squash, or any number of regional specialty flavors?

In my home base of Nagoya, I went to the zoo and botanical gardens often, not just to visit the tanuki (both a real animal and a popular statue outside of bars and restaurants), but also because they had my favorite spot for soft serve.

I visited frequently (thanks to a very reasonably-priced annual pass) and could lose hours walking the grounds. On nice days I'd often treat myself to a black sesame soft-serve, but even ordering in Japanese I wasn't always convincing enough—sometimes the worker would come out of the stand, around to me, and physically point to the picture to make sure I really knew what I was getting myself into. Yes, yes I did. Black sesame, onegaishimasu. 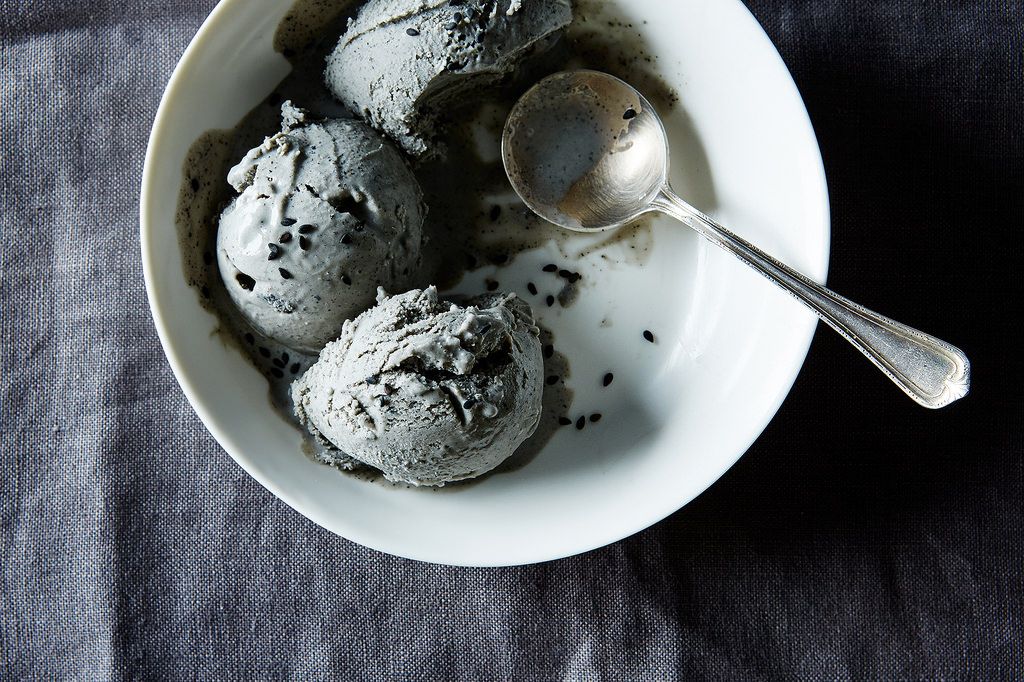 Back at home, where black sesame soft-serve is not as pervasive, I make a version that’s more ice cream than soft serve. I like not feeling like I have to be in such a rush to eat it before it melts into a gray puddle. It starts with a less sweet, more salty version of Jeni's Ice Cream Base with black sesame seeds (of course) and vanilla bean seeds. Yes, I'm sure you could substitute a small amount of vanilla extract for the vanilla bean seeds, but it makes my soul sing to know that some of the flecks are vanilla bean seeds are mixing in, becoming friends, with the sesame seeds—delight in the little things and all that.

Makes about one quart

Do you have a favorite food that tastes better than it looks? Tell us about it in the comments!

Lindsay-Jean H. January 6, 2019
So happy to hear that you enjoyed it, thank you.

ns July 27, 2015
Sounds delicious! Do you think you could make it using coconut milk as a base instead of dairy? I'd like to limit the fat and I have trouble digesting cow milk. Any suggestions?
Author Comment

Lindsay-Jean H. July 27, 2015
I don't really want to steer you away from trying my recipe, but I am anyway. I think it might be best to see if you can find a recipe for black sesame ice that already calls for coconut milk. It took a lot of fiddling for me to get the amount of black sesame seeds just right, and I'm afraid you'd have to do even more fiddling, since they'll be competing with the coconut flavor, it will take tweaking to get the amount right.

kimikoftokyo June 21, 2015
I've actually had this and it's very good. And I agree on how nice japan is. Its a creative foodie haven.

Lindsay-Jean H. June 18, 2015
No, nigella seeds are an entirely different type of seed.

Maisa June 17, 2015
This made me miss Japan. Pretty much anything makes me miss Japan, but this especially. I will be making this very soon!!

AntoniaJames June 16, 2015
i read this article, mesmerized, and all I can think of is this:

WHB June 16, 2015
There is nothing like black sesame ice cream. True bliss.

There's also a Mitsuwa outside Chicago.

soojasaurus June 16, 2015
If you need a fix in the states and you live near NYC, you can get some pretty awesome black sesame soft serve at a Japanese Grocery store called Mitsuwa in Edgewater, NJ. I usually have about 2-3 cones while I'm home!