Every week we'll be asking you to come with us to some of our favorite small towns and cities. This time we partnered with Tennessee Tourism to uncover the best Nashville has to offer—and here are our favorite spots, from food and drinks to parks and music. 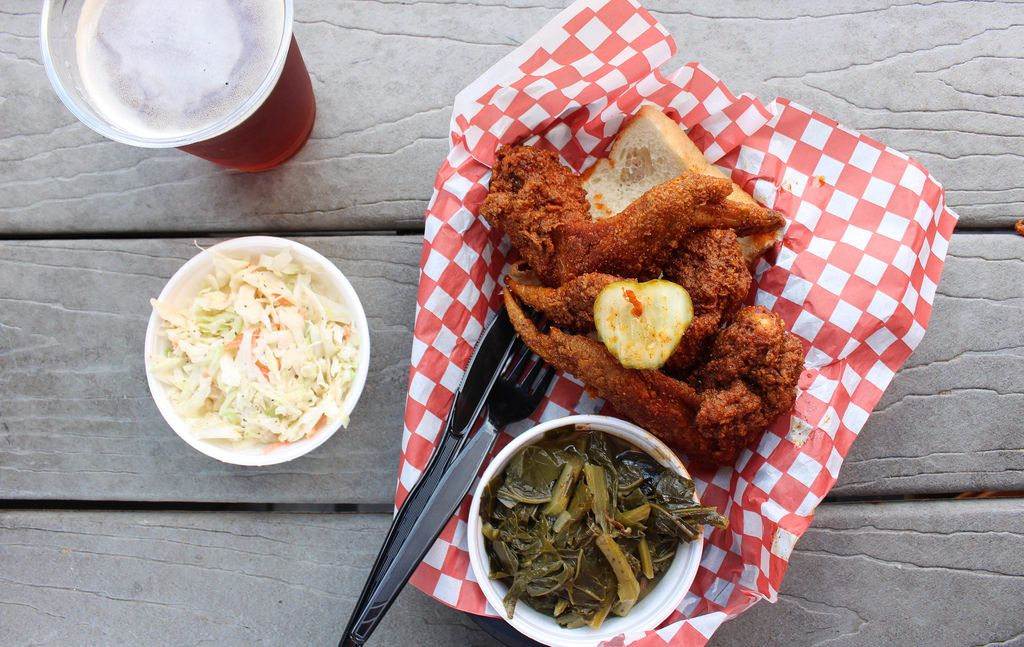 The air in Nashville, Tennessee is soft and heavy, like the biggest magnolia petals you've ever seen—thick, velvety, and enveloping. It’s fragrant like the blossom, too; something I noted as I slowly shuffled along Vanderbilt’s winding campus recently, trying to get a little lost before making solid plans for seeing the rest of city. Gillian Welch played in my ear, and I began by breathing it all in. 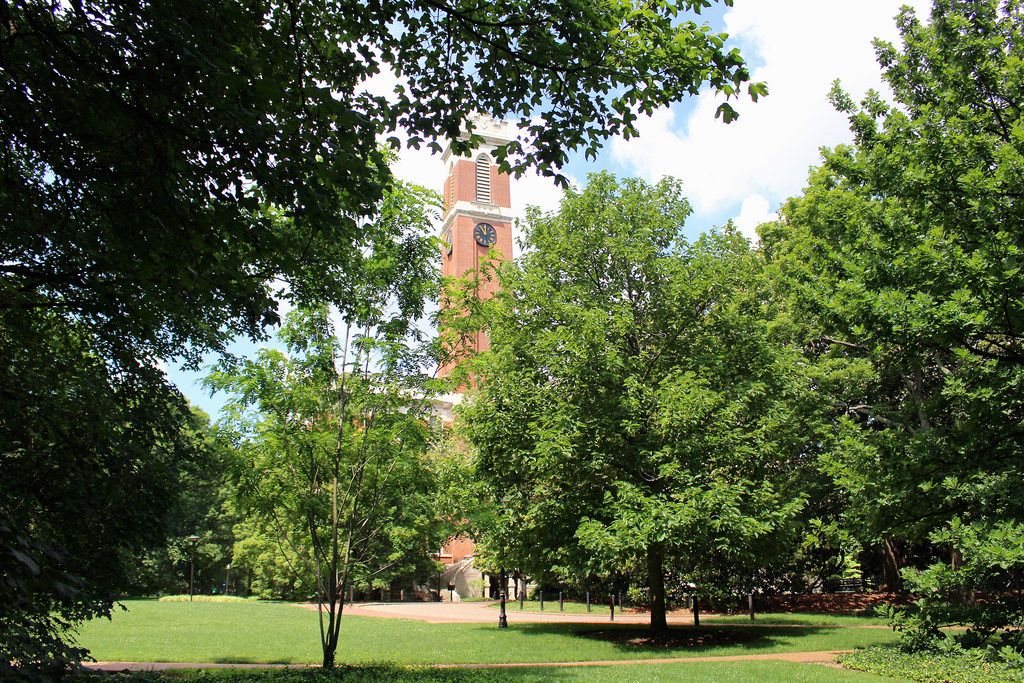 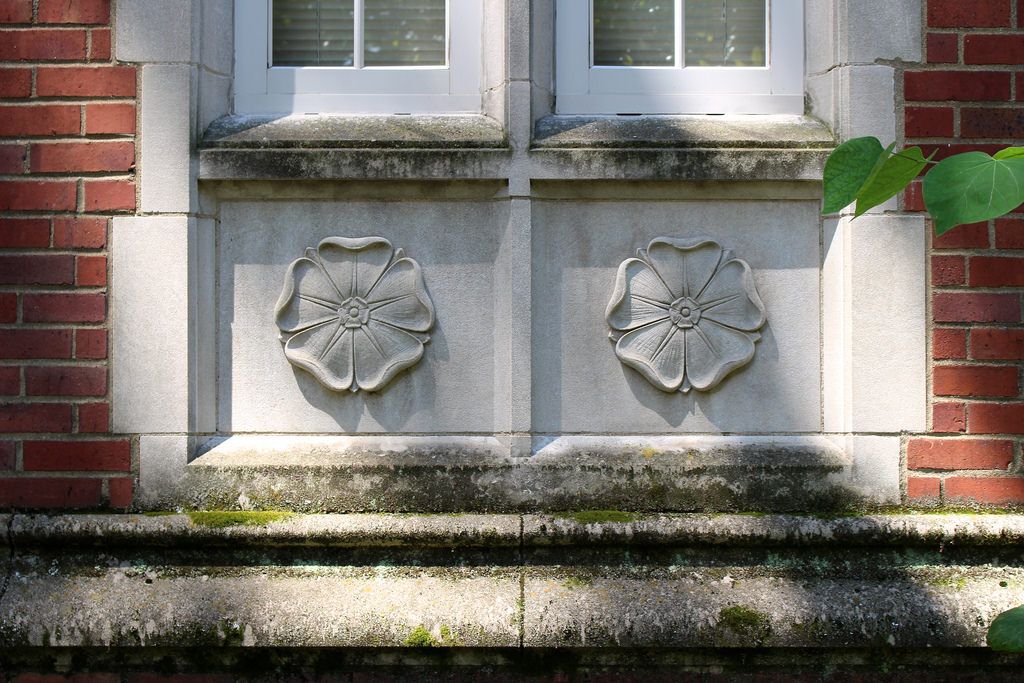 Starting in a place like a university often works well—it’s generally not in the heart of everything, but there’s old soul and spirit present, a proudness that is exuded even when it’s quiet. And, in this case, it was like revisiting an old friend or familiar spot: Vanderbilt is near where my first food memories of Nashville were made, almost eight years ago.

Like a true Midwesterner, I’m constantly searching for excuses to return to the middle of the country. Lucky for me, the Nashville food and beverage scene has exploded over the past decade, leaving in its wake a smattering of inventive and inspired places to eat and drink.

Here are the places that spoke to me during my recent visits, and that have made their way into the hearts of other Food52 editors and community members:

Coffee pick-me-ups are waiting for you as soon as you get your bearings: 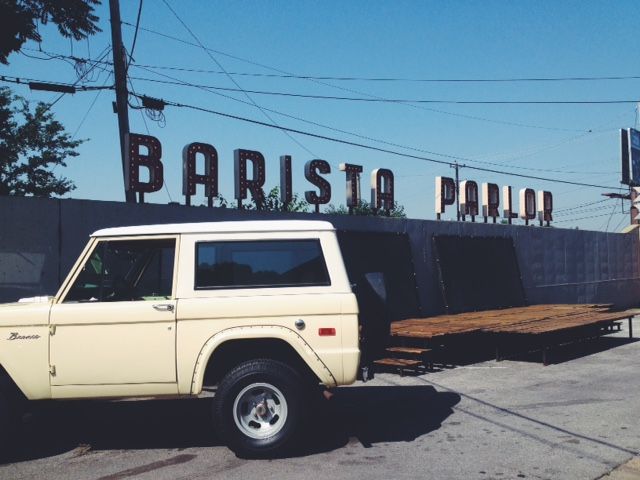 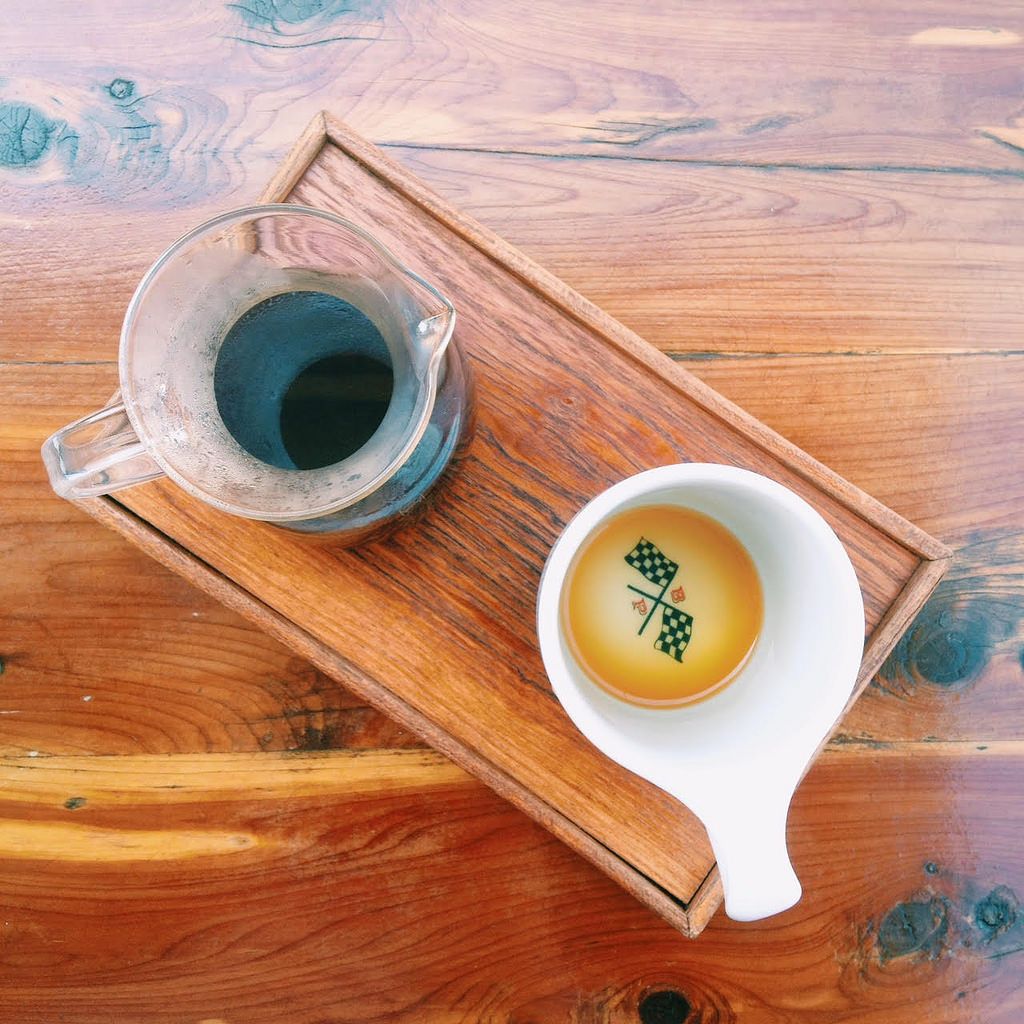 Housed in an old transmission shop in East Nashville, Barista Parlor is the place for a great pour-over coffee. There are also cold, bubbly coffee drinks, breakfast sandwiches, and an expansive chocolate selection laid out like tiles, cordoning off the area where the coffee magic happens.

Several locals I spoke with mentioned Crema as a favorite, and our co-founder Amanda Hesser loved their avocado toast.

Mollie Ward, General Manager of local restaurant Rolf and Daughters, gave me tons of suggestions for food and drink as soon as I arrived. For a morning perk, she loves Steadfast’s coffee soda. (Coffee and bubbles seems to be a thing in Nashville.)

If you find yourself hungry mid-morning: 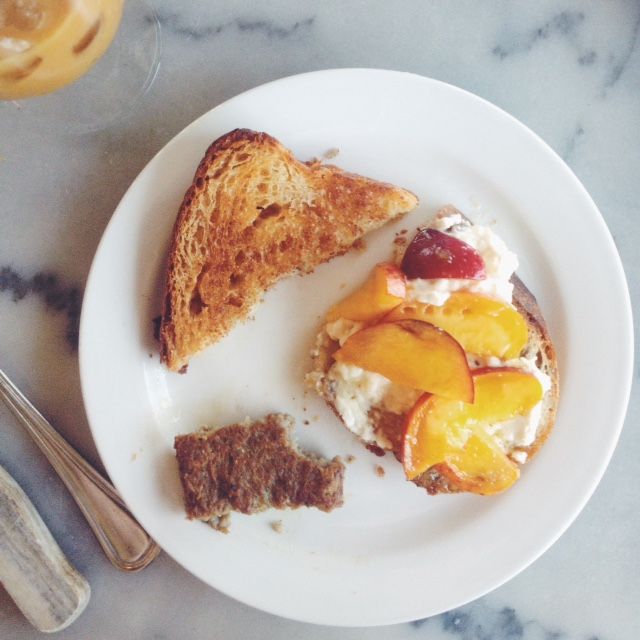 Head to East Nashville and get your brunch fix at the bright and airy Marche Artisan Foods. Sister restaurant to the storied Margot Cafe, it's filled with natural light, as well as homemade brioche and breakfast sausage (bless them). Don’t miss the seasonal fruit tartine, this time covered in ricotta, honey, and fresh peaches.

Hardly anyone would disagree that Arnold’s Country Kitchen—a cafeteria-style restaurant serving up Southern classics—is anything but a quintessential taste of the region. It's known as one of the city’s best meat and threes (where customers pick a protein like fried chicken or country ham and three sides), and there's never not a line. (But don't worry—it moves fast.)

Chances are, if you’re in Nashville, you’ve got a place in your heart for country music:

Head over to Music Row, where musicians like Elvis Presley, Dolly Parton, Chet Atkins, and more recorded music at Nashville’s most recognized studio, RCA Studio B.

Peek into the legendary Ryman Auditorium (home of the Grand Ole Opry) and if you have time, scoot around the corner to the Country Music Hall of Fame. Mollie says everyone should go.

Working up an appetite with all that walking? Lunch in Nashville isn’t complete without a good local beer on the side:

Butchertown Hall, in the Germantown neighborhood, is a mash-up of Texan and German cuisine, all served in a gorgeous space covered in white subway tile and beautiful, soothing wood. A crisp, fruity Jackalope Brewing Company Rompo Red Rye Ale was my on-tap go-to, with a side of nachos borrachos and chorizo plus a kielbasa served with bright green pickles, grainy mustard, and tortillas (no buns needed). 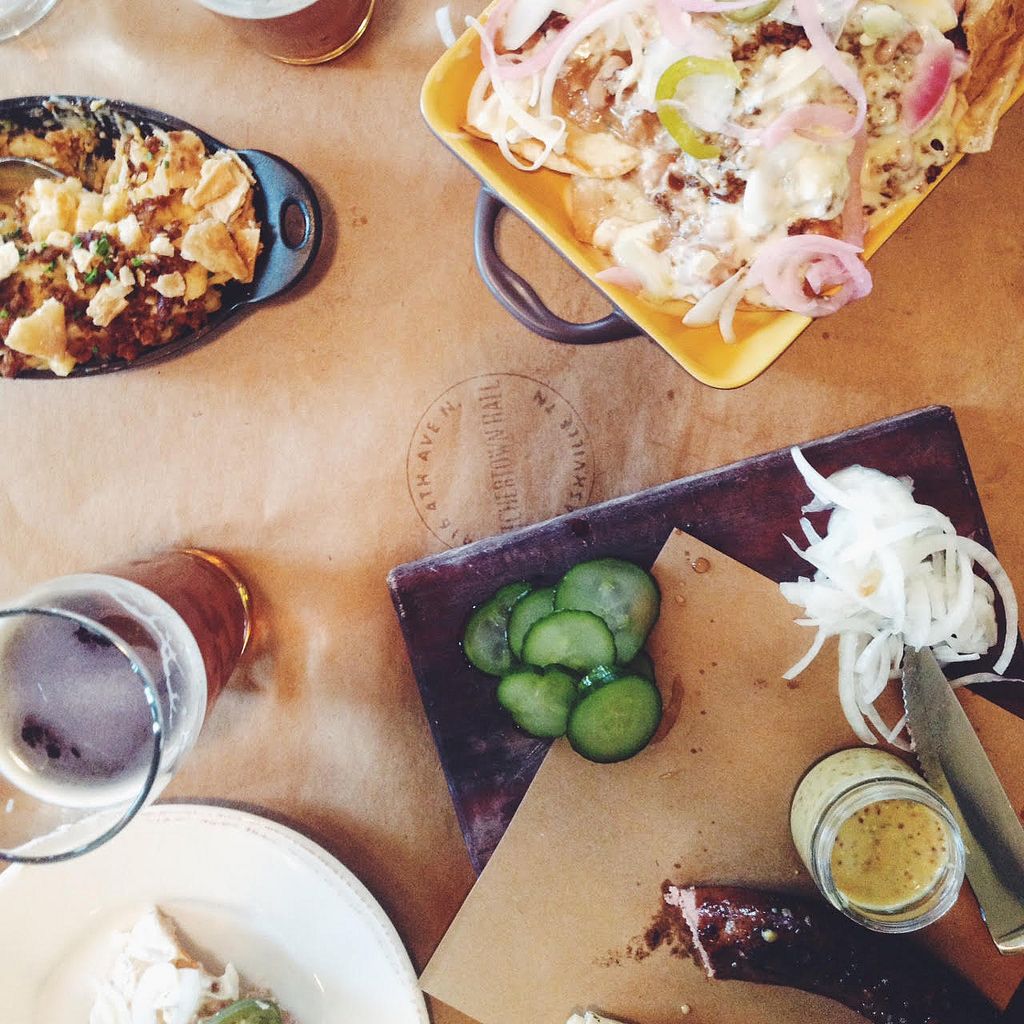 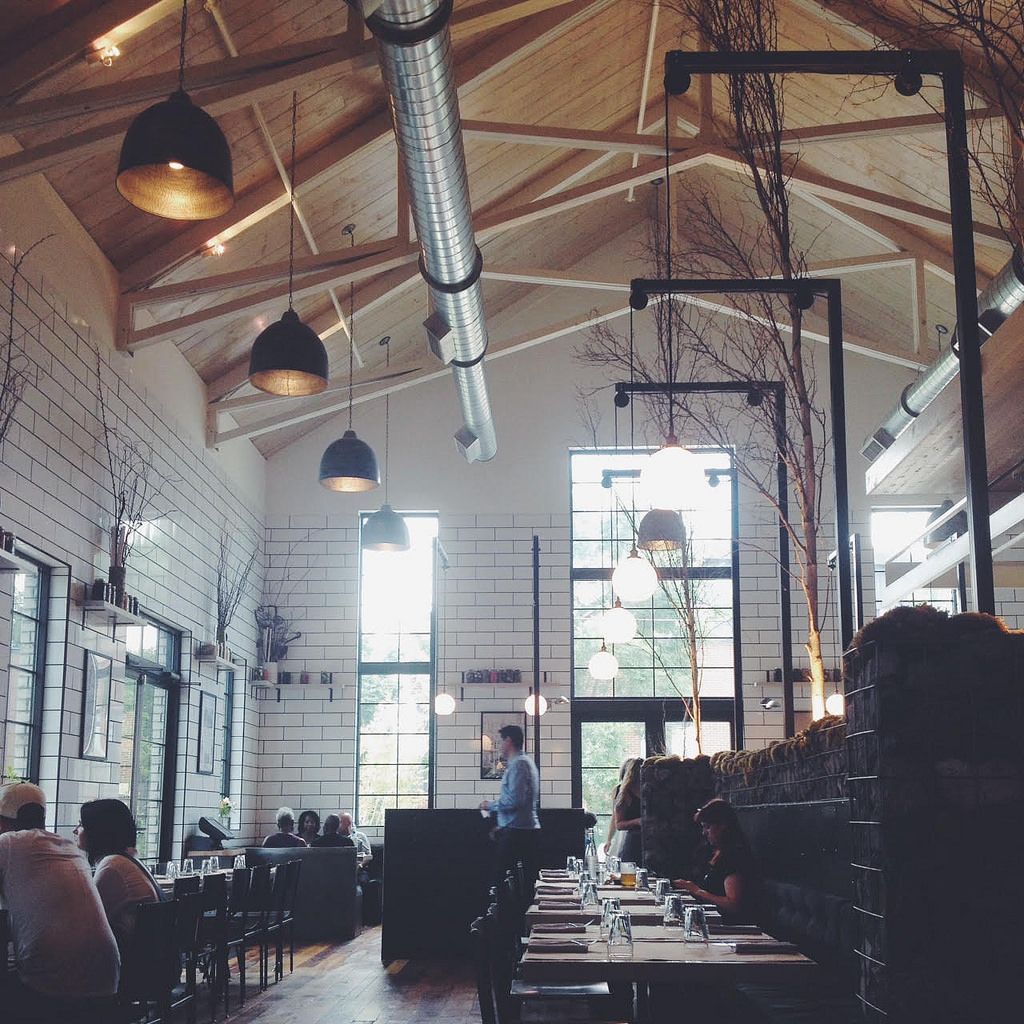 The craft beer scene in Nashville is growing wildly, and you’ll want to try as many as you can as they’re hard to get outside of the region. Jackalope’s taproom and Yazoo Brewing Company are conveniently located within blocks of each other in a neighborhood called The Gulch. Don’t miss the sour and wild beers from Yazoo if you can get a glass!

Even more beer awaits you at the 12South Taproom, a casual restaurant/bar with over 25 taps (loads of Tennessee breweries like Black Abbey, Wiseacre, and more) to choose from. There’s a great patio, the vibe is super friendly, and you could order a little or a lot of food.

If you need a quick bite to fuel up:

Multiple people recommended Burger Up as a good option if you need something fast and you’re around the 12South neighborhood. They source all of their beef from Triple L Ranch just 30 minutes from Nashville, in Franklin. You’ll also want to stop by Las Paletas for a refreshing popsicle post-meal. If you’re not a meat eater, Mollie recommends Gabby’s in Wedgewood-Houston for the best veggie burger in Nashville.

Mas Tacos Por Favor rumbled around town in a Winnebago for a few years until owner Teresa Mason set up a permanent shop in East Nashville to sling her well-known Mexican food. Mollie says the tortilla soup and agua frescas are equally as delicious as the tacos.

You’re in the land of whiskey, so you should probably taste one or two (or a few): 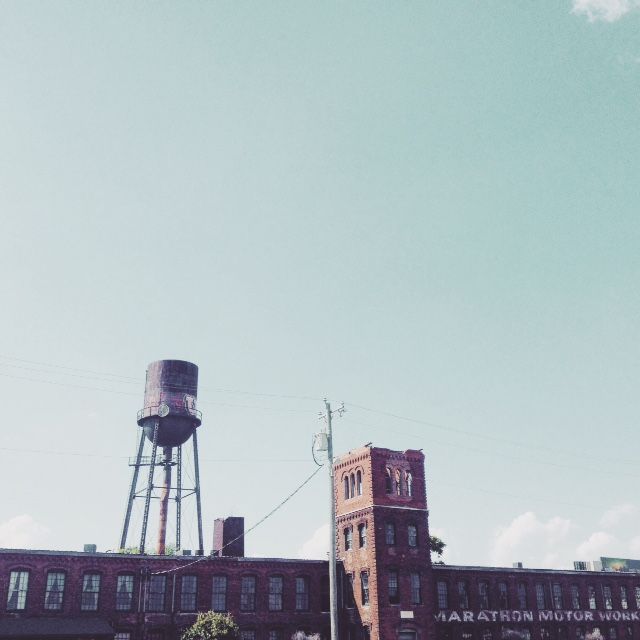 The Marathon Motor Works building on Clinton Street is home to two distilleries and their tasting rooms, and the building spans an entire block, housing creatives, antiquing, and independent shops. The historic Nelson’s Green Brier Distillery produces the award-winning Belle Meade Bourbon as well as Tennessee White Whiskey (join in on a tasting; it includes the great story of the founder). Corsair Distillery is right down the street, too, and is known for inventive spirits like red absinthe and quinoa whiskey. 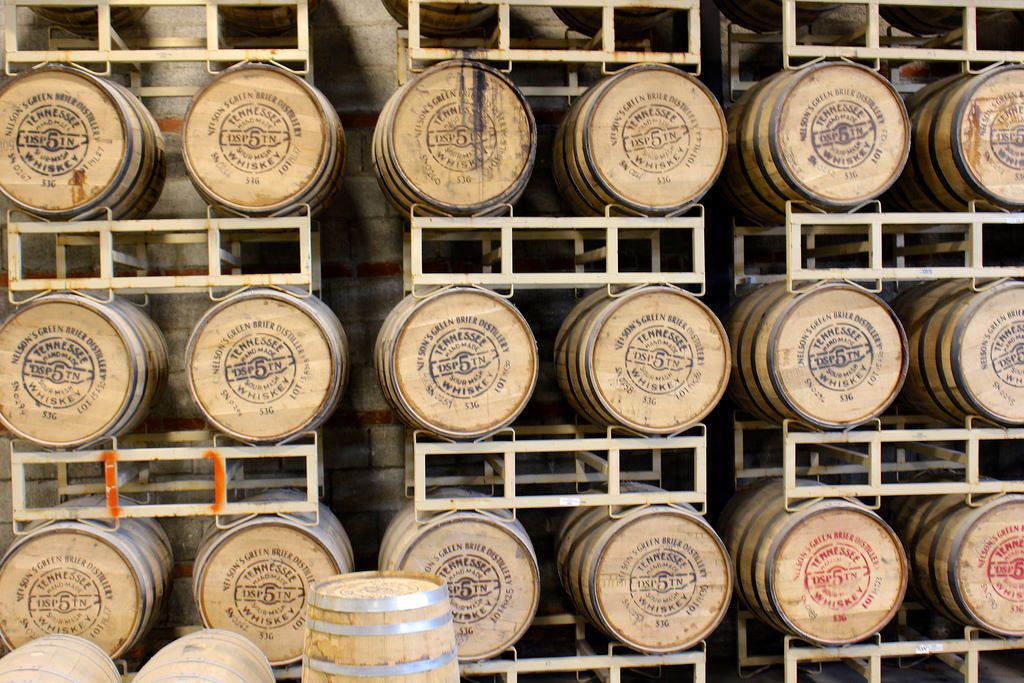 If you want a wider selection of the browns, Whiskey Kitchen in The Gulch has an extensive list, from American and bourbon to scotch and rye whiskies. I tried an ounce of Weller 7 Year and chatted with Terry at the bar, who told me he lives in Memphis but loves Whiskey Kitchen for its friendly bartenders and comfortable atmosphere.

If it’s beginning to cool down and dinnertime is nigh: 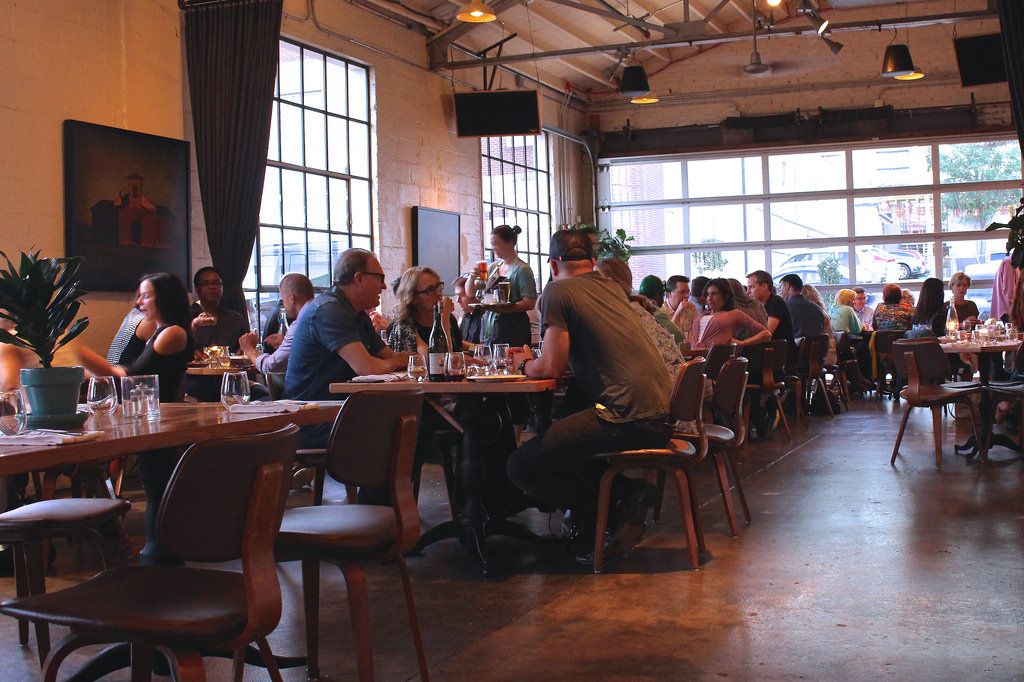 Kitty-corner to Whiskey Kitchen is Adele’s. The space—a renovated garage offering lofty ceilings and copious light—has a wood-burning oven, an open kitchen, and a fireplace on which they grill ingredients for several of their dishes. I sat at the bar and watched, mesmerized, by the kitchen’s speed and prep. If you go, no matter what else you order, get the signature milk punch and the meatballs. Head to Husk if you are looking for signature dressed-up southern fare, or make a reservation in advance for the tasting menu at Catbird Seat. 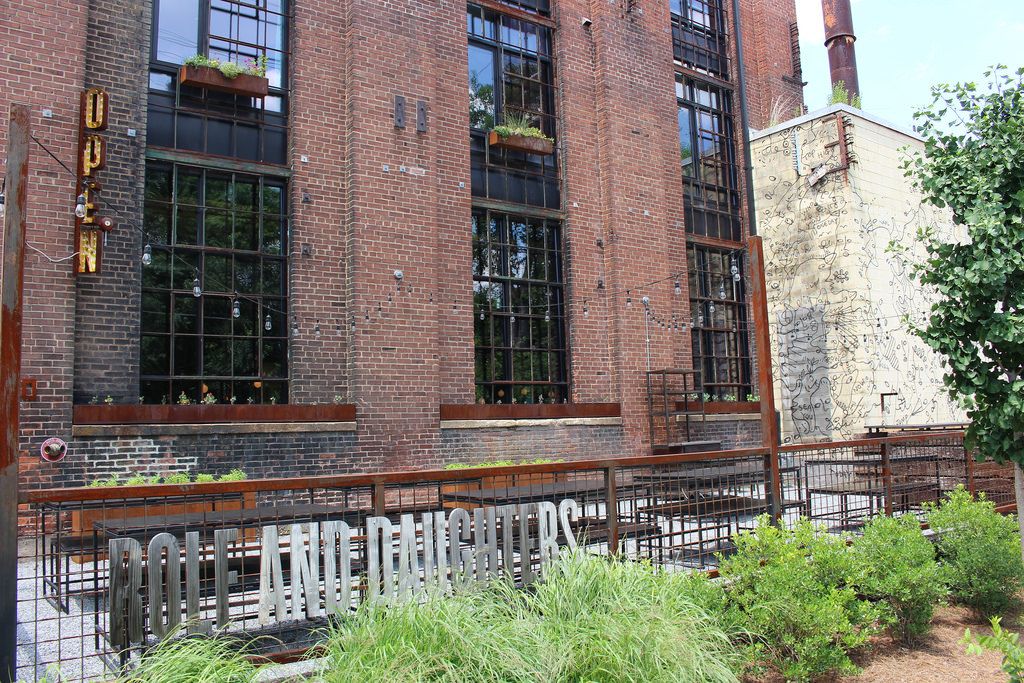 From there, it’s just a short skip over to Rolf and Daughters, a neighborhood restaurant with Italian leanings, evidenced in the ever-changing small plates and excellent pastas (the gnocchi with morel and Piave and the squid ink canestri are highlights). One of the most memorable dishes I ate in Nashville was RAD’s agretti with anchovy and sourdough.

And make sure you don't let your server take the bread from your sight. The cocktail menu matches the quality of the food at RAD, and Green Brier’s Belle Meade always makes an apperance, most recently the Kick Flip, an end-of-a-meal pleaser made with cold brew coffee, whole eggs, and walnut bitters.

But if you’re in the mood for something low-key, try Martin's BBQ Joint, Mollie’s favorite, or Edley’s Barbecue.

If after-dinner cocktails are in order:

You’ll want to grab a seat at Midtown’s The Patterson House, known widely for the best cocktails in the city. 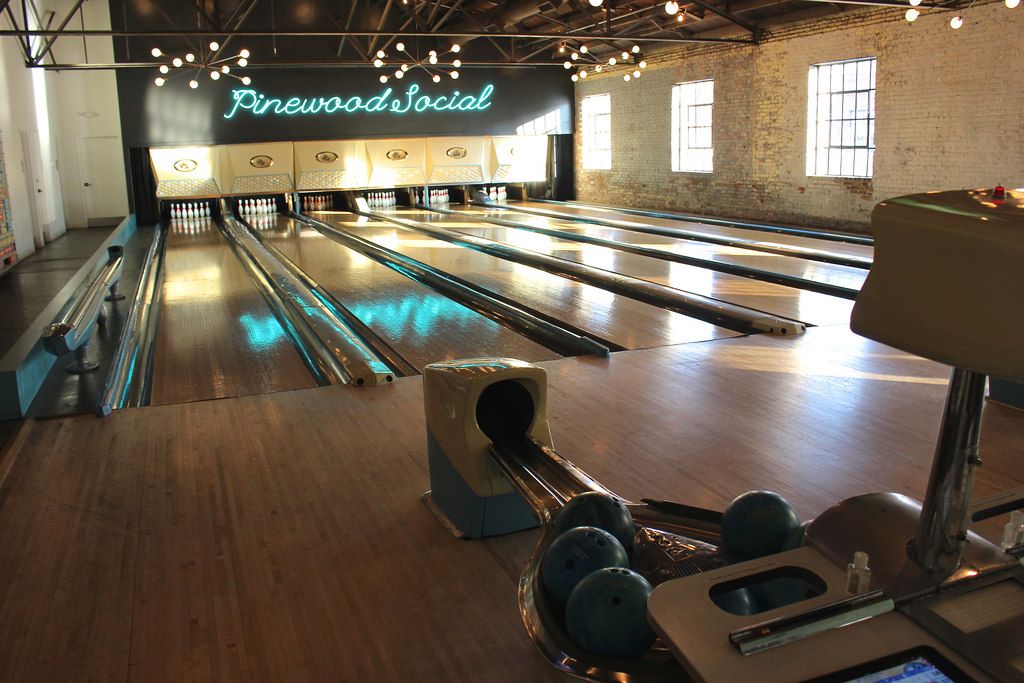 If you like a side of activity with your drinking, try Pinewood Social, a gorgeous, airy bar complete with a bowling alley, outdoor bocce courts, and a pool. (Perhaps, as an avid bowler, I’m biased, but I totally fell in love with the retro pins.)

You can’t leave Nashville without having hot chicken: 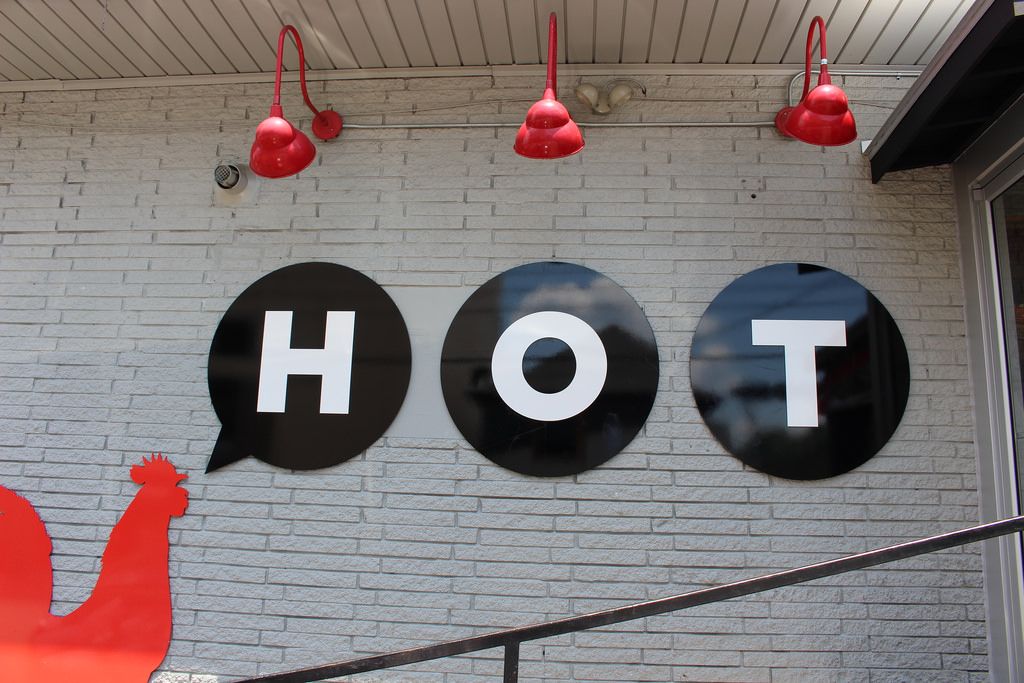 There is no dearth of options, no matter what neighborhood you’re in, and everyone has an opinion on what’s best. If you can make it through the hottest chicken at Hattie B’s, Bolton’s, Prince’s, and Pepperfire, I salute you.

Because a visit to Nashville feels incomplete without taking in a little live music:

Pop into the storied Station Inn for some bluegrass or The Stone Fox for a wide grab bag of musicians, and head to Mercy Lounge if you want some bigger names.

More of a mover? Put on your dancing shoes and head to a honky tonk (a dance hall with country music) to work up a sweat—don’t miss Robert’s Western World or Tootsie’s. And if you want to sing yourself silly, Santa’s Pub has you covered (it’s a double-wide with a fridge full of beer and a good amount of 90’s tunes in the karaoke rotation).

And if you have access to a kitchen (or want to bring a little bit of Nashville back with you): 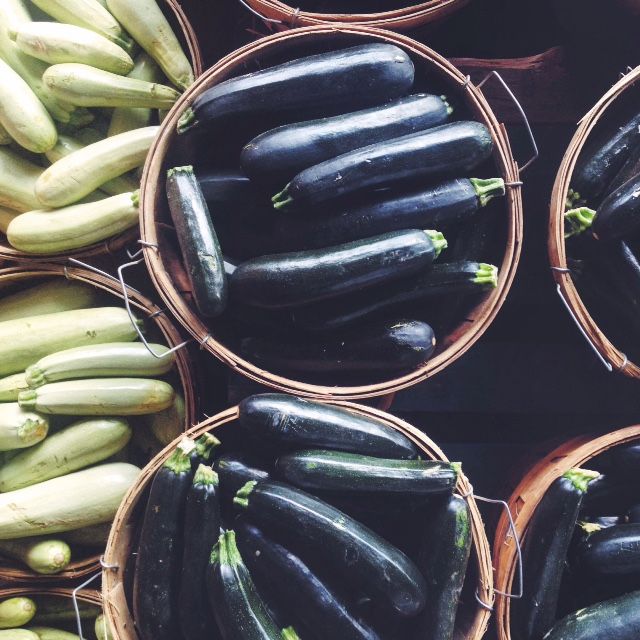 Stop by the Nashville Farmers Market—open most days from 8 to 6 PM—for in-season produce and other food. In early June, I was floored by the amount of squash, zucchini, beans, greens, and sweet potatoes available, and the garlic scapes were as long as a leash. It’s here—among other local spots—that you might catch The Peach Truck, purveyors of fresh Georgia peaches and pecans (I couldn't resist stocking up and toting three bags back to New York). 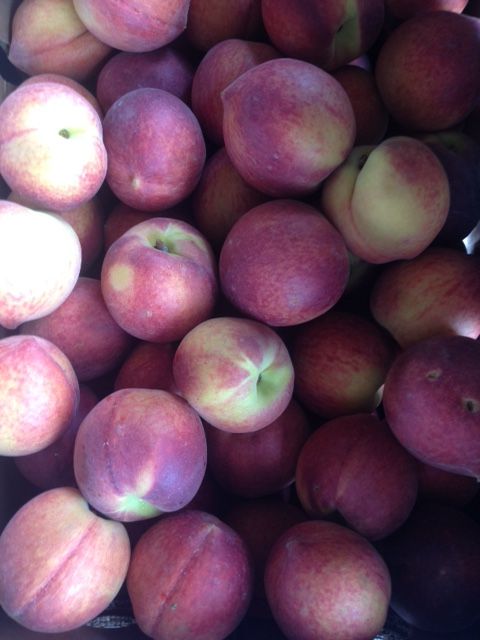 Don't forget a bottle of wine for the end of the night—or maybe your picnic in Centennial Park the next day—at the most eclectic wine selection in the city—Woodland Wine Merchant in East Nashville.

Looking for a little music to accompany your trip? Here's a playlist for all the moments in between eating, drinking, and taking in shows:

See all of our favorite places on the map below. What are your favorite spots in Nashville? Let us know in the comments!

For more information about traveling to Nashville, and the rest of Tennessee, head here.

Andrew M. June 18, 2015
I'm not from here but have lived here for two years. This town is a jewel, the people are the real highlight though. As far as a coffeehouse I must recommend The Jam Coffeehouse. The ones mentioned in the article are very good but if you wanna avoid the hipsters and care about what goes into your body The Jam is the place. It's a family-owned joint and everything is organically made. And when I say that, I mean the coffee ingredients. All syrups are made in house and I've never had the combination of flavor they come up with in their unique drinks. Do yourself a favor and make The Jam a destination. The mom and three sisters are the nicest people on earth!

Dan June 18, 2015
Monell's in Germantown serves family-style southern food. You share tables and always pass to the left. And do not miss the Time Jumpers western swing band. They play every Monday night at 3rd and Lindsley. They are spectacular!

gritsannegreens June 17, 2015
Provence in Hillsboro Village is my favorite bakery in town, Mitchell's Deli in East Nashville has the BEST sandwiches, Lockeland Table (East Nash) and City House (Germantown) are right up there with RAD, and Lazzaroli Pasta in Germantown is the most authentic Italian market in the city.
Author Comment