Meet the Woman Who's Making Us Love Ukrainian Food

Today, Meg Abbott and Issy Croker—the London-based writer and photographer duo who call themselves The Curious Pear—are invited into the kitchen of Olia Hercules, the chef and cookbook author bringing much-deserved attention to Ukrainian food. 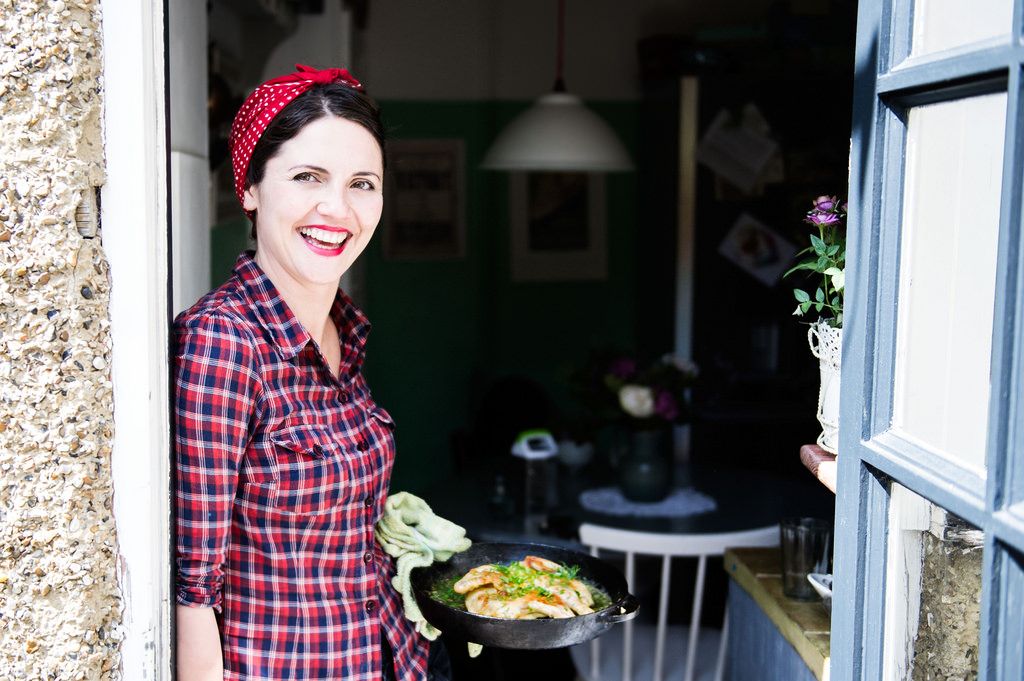 For the last couple of months here in London, Olia Hercules’ name—which has to be up there with the coolest of all time—has been cropping up everywhere, from magazines to newspapers to T.V. shows.

And it’s not hard to see why: With her exceptional cooking talent and charisma, Olia—a Ukrainian native—has been at work opening our eyes to the wonders of Eastern European cooking ever since she moved to the U.K. thirteen years ago. The foods of Olia’s home country have long remained something of a mystery, lost within the ever-changing food scene in London. We’ve caught on to Persian food, Southeast Asian food, superfood, and classic British food. But Ukrainian food? Not a peep—until Olia came onto the scene.

“When friends come to Ukraine from all over the world, they were amazed by the produce, and how light and gorgeous the food is,” Olia explains as she shows us around her home and kitchen. “Seeing how surprised everyone was made me realize that people had so much to learn about it. I was sitting on this treasure chest of amazing recipes, and I thought ‘If people knew more, things could change.’” 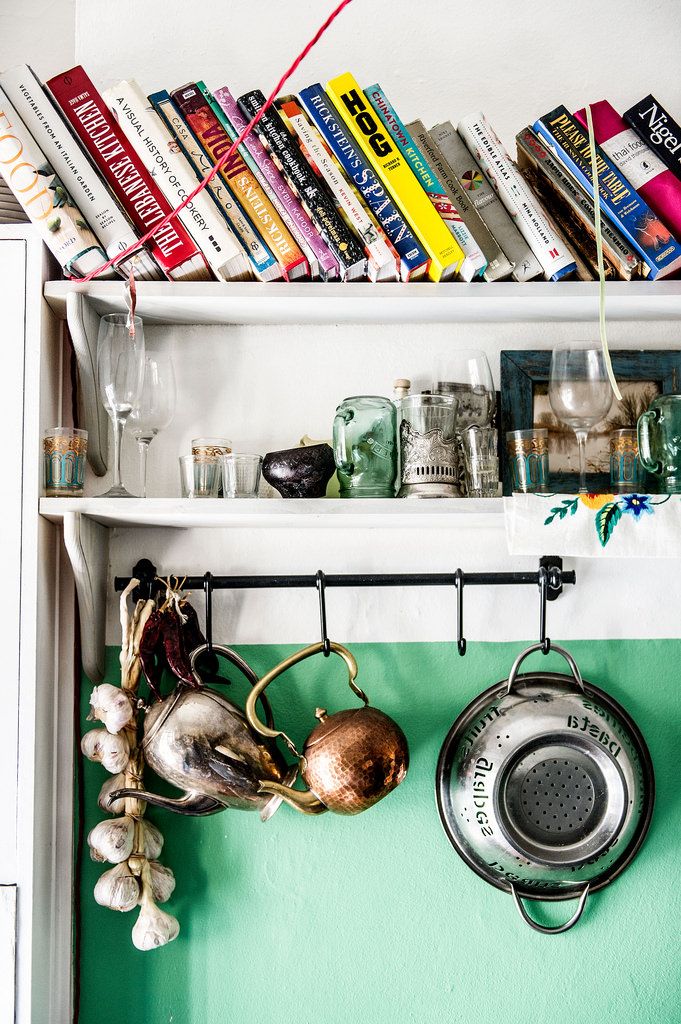 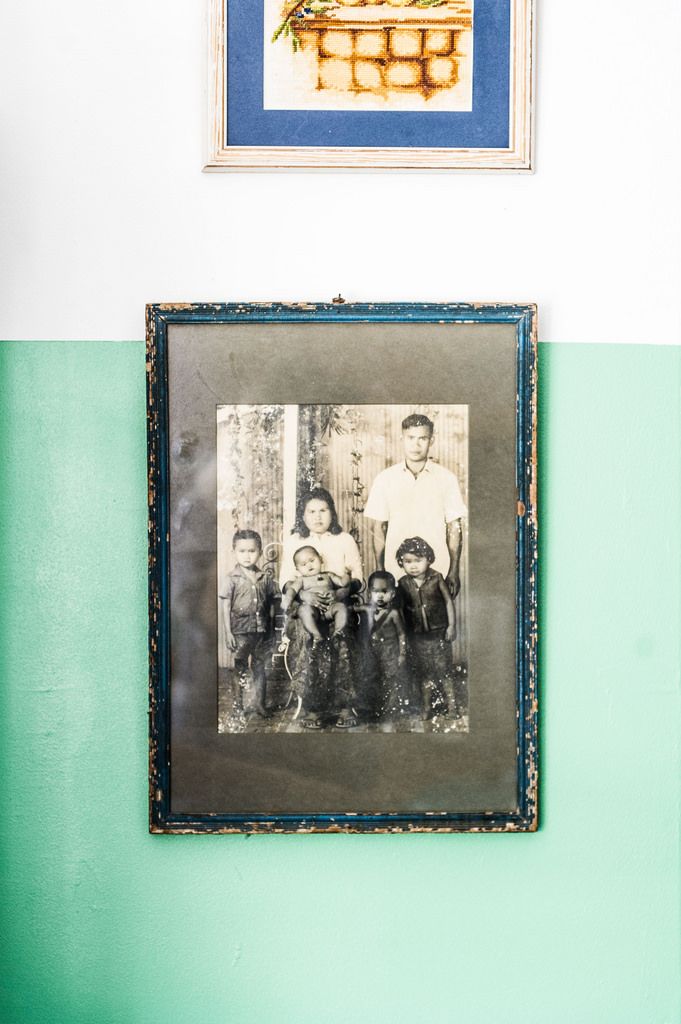 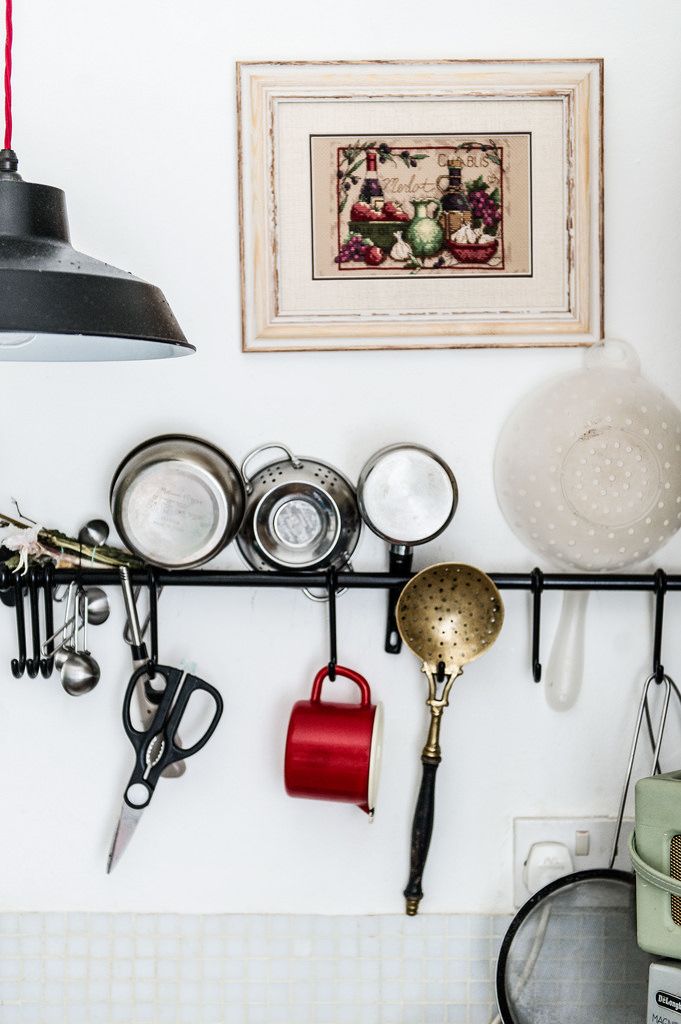 "My ex-husband’s family is originally from Laos but moved to Thailand. When we visited their old house in Thailand, I found this [portrait] lying there, all cracked and dusty. I took it home and re-glassed it. Sasha’s dad is an amazing chef, and incorporates all of these different influences from Southeast Asia."

Fresh from the Islington kitchen of Ottolenghi, Olia began working as a recipe tester and food stylist for magazines like Jamie. As she was beginning work on her first cookbook, she came to the nation’s attention when she was selected as Observer Food Monthly’s Rising Star of 2015.

Mamushka: Recipes from Ukraine and Beyond, which will be hitting the U.S. shelves in October, is a love note to the food Olia grew up eating in southern Ukraine. The name of the book comes from the women of her upbringing (an Armenian aunt, a Siberian grandmother, and a Ukrainian mother)—the “Mamushkas"—all of whom used the colorful produce that surrounded them in the port city of Kakhovka to create the dishes that shaped Olia’s culinary personality. 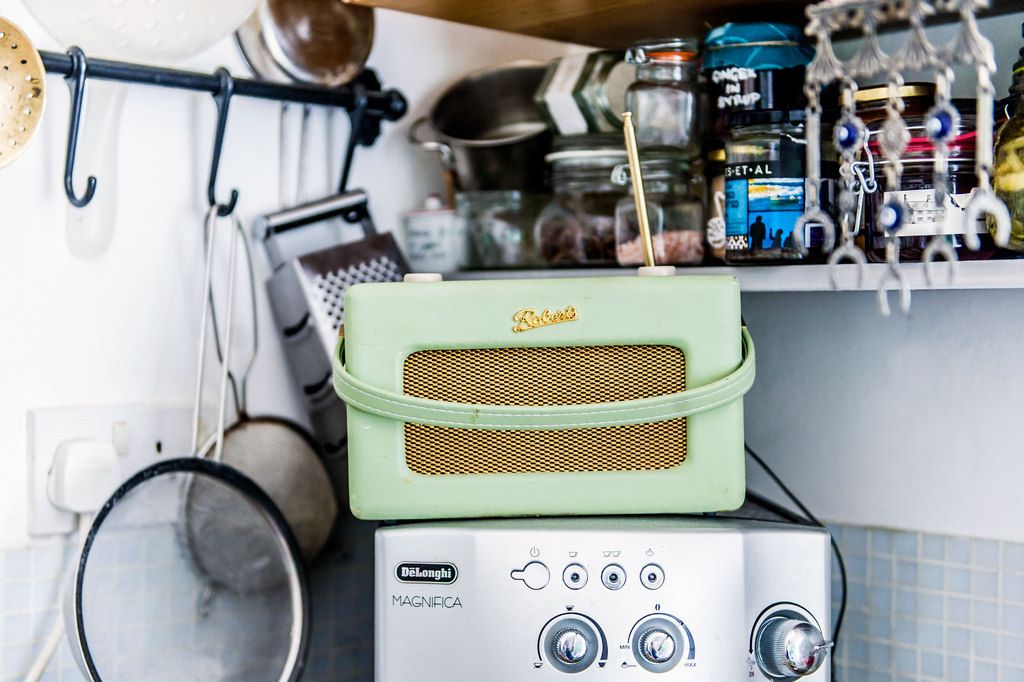 “Everything in the house kind of has to mean something.”

Olia grew up surrounded by a bounty of produce, from watermelons and cherries to eggplant and walnuts. “Everything was extremely seasonal,” Olia tells us, adjusting her bright red headscarf. “From April to September we had this abundance of crops. We had a gooseberry bush in the garden, lots of strawberries, and a cherry tree. It was just normal to us. Come winter there was nothing, so we fermented everything. That seasonal change has really influenced my cooking.”

The afternoon of our visit to Olia’s home brought rare warmth and sunlight, so we ate lunch outside with the kitchen door propped open and the music from the radio still in earshot. Along with a creamy cucumber and salted yogurt salad, Olia served spatchcocked poussins with butter, plenty of garlic, coriander, dill, and tarragon. “This is a Ukrainian-ised Georgian dish,” Olia tells us. “I cook this all the time. My friends love it!”

The food was zesty, deep, and moreish, served with hunks of crusty Ukrainian bread, which Olia insisted we use to mop up the juices. She didn’t have to ask us twice. “I’m such a feeder! Seeing people eat my food gives me a real kick.” She laughs, as we demolish the last specks. 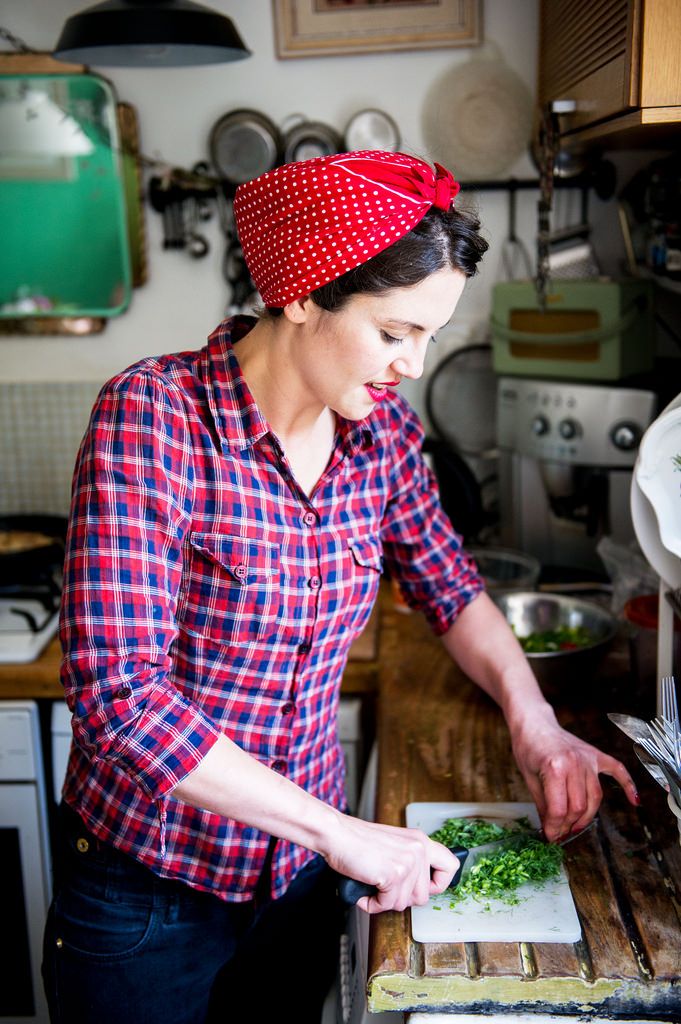 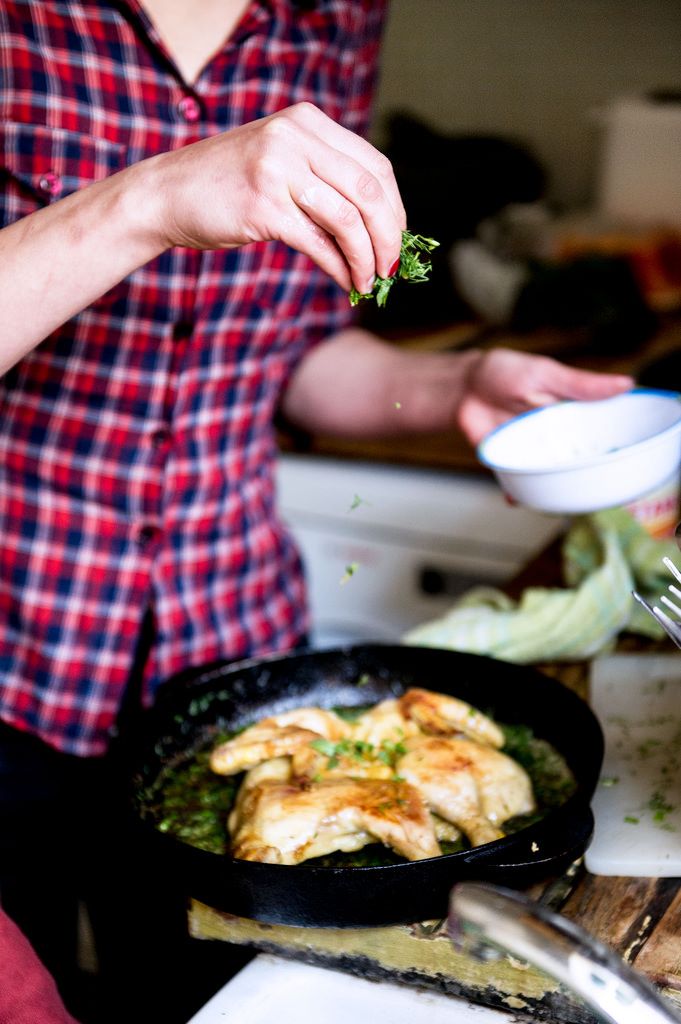 Olia is one of those people that you end up telling your life story to, prompted or not. She is warm, fiery, and incredibly open, traits reflected in every page of Mamushka. “Recipes are best when they are linked to a story, no matter how small.” She says, “I think people are responsive to you when you’re honest and personal. In life and in food.”

Going to Olia’s house is like visiting an old friend. Beyond the front door of her North London home, her intriguing character is immediately apparent. There are vibrant colors on the walls, sepia photographs of her ancestors, a radio blaring out voices, and the nose-flaring scent of home cooking. She shares the house with her three-year-old son Sasha. Like most food-lovers of the world, Olia has made her kitchen the core of her home. “Oh, I’m always in here. My bedroom is literally just for sleep, but this is my home! Sasha and I just hang out here and listen to the radio.”

As the hype around her continues to grow, Olia Hercules is bound for life as one of the U.K.’s most talked-about cooks. But her focus is always on the food and on bringing people’s attention to Ukrainian flavors. “Multiculturalism is very interesting to me. And so much of that is food.” She explains, “I believe that food can connect cultures. Learning what people do from day to day in other countries can really bind you to them.” With her rich, deep, nostalgic food, Olia is keen to share a far different Ukraine than the one we are used to. “Ukraine is a big country, and everyone from there has had a different experience. I guess I’m just trying to bring my world into what I’m doing. It is a world I love so much.” 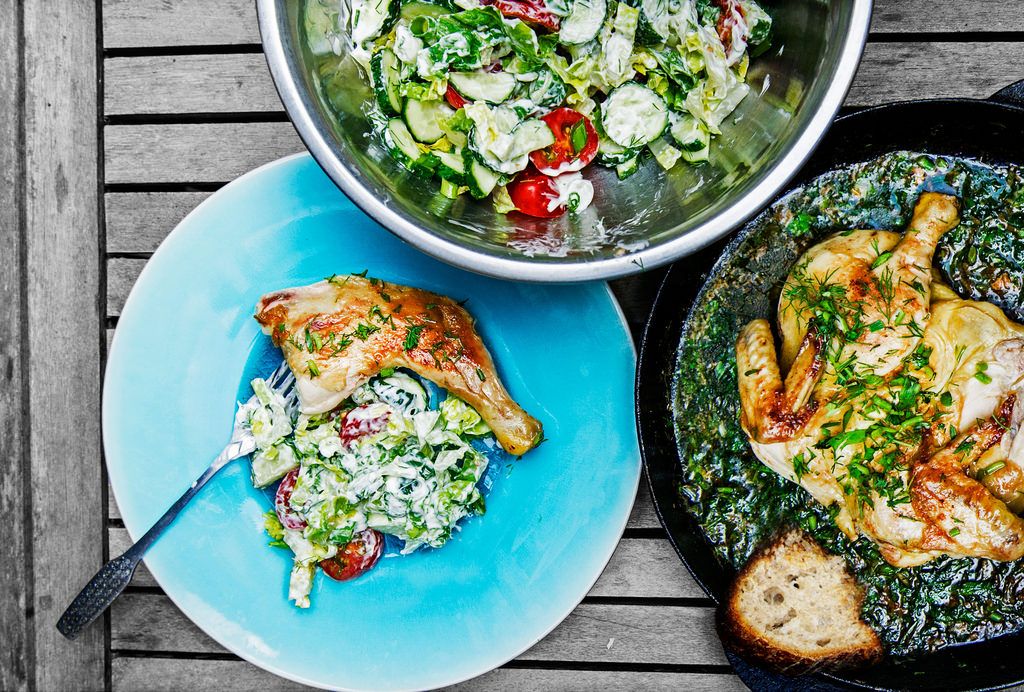 “I cook the things that my mum and grandma used to cook while I grew up, but I guess I’ve naturally altered some of the recipes over the years. But I’m quite true to the food I’ve always known and loved—otherwise what’s the point?”

Vika December 3, 2016
Wow, just bought a Globe SP5 mixer from Dine. What a God send. I live in Kiev and had it delivered from America with American eBox, a parcel forwarding service. If any of you need such a service I recommend it. https://live.americanebox.com