Two summers ago, my couple friends Jason and Tyler moved in together, and within barely a month of being in their new spot it felt cozier than all my past apartments combined (so typical of nesting lovebirds). You might remember the space below—we shot it to talk about how they merged their two styles into one, and ran the piece after profiling Jason's apartment as the "before." 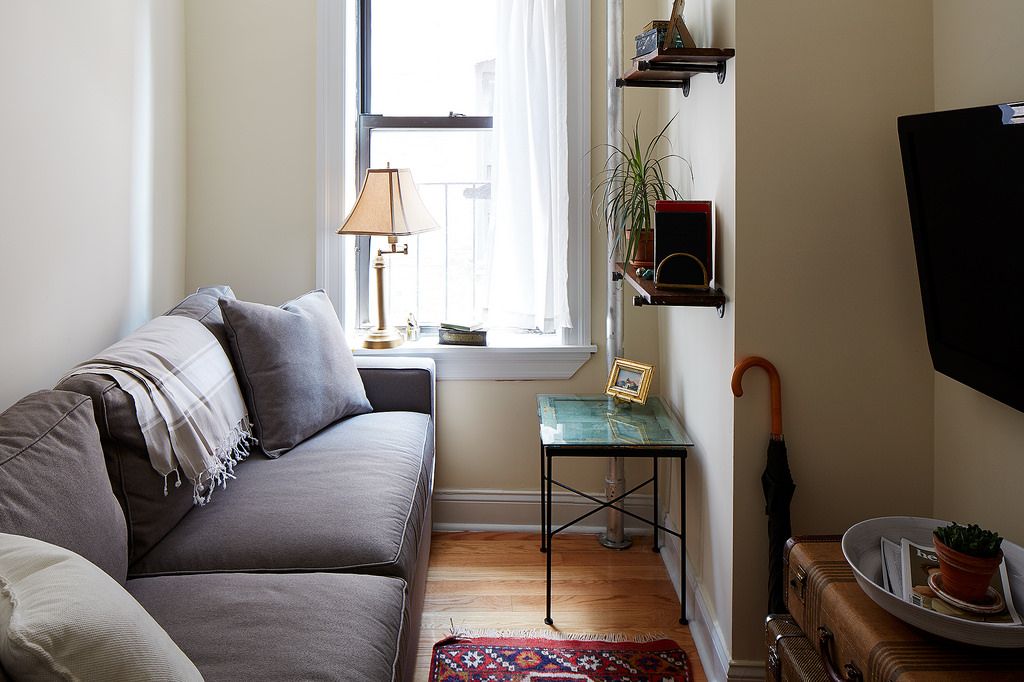 For cozying up or grabbing on the way to a picnic in nearby Tompkins Square Park, this Turkish Cotton throw (available in the Food52 shop!) adds a soft touch.

In the spirit of the new year (which always makes me want to freshen up my own space), we're bringing you the story again—this time with all the good ideas spelled out clearly so you can pick out the ones you like and set some apartment goals for 2017.

Turning a Tiny Second Bedroom Into a Den

When Jason and Tyler told me they were going to turn the smaller bedroom in their new 2-bedroom apartment into a living room (the result above), I worried it would, being just 5 feet across in some places, feel cramped—and therefore not at all a place they'd want to hang out. But a good window gave it plenty of light, and they took care to maximize every inch without cluttering it. How? 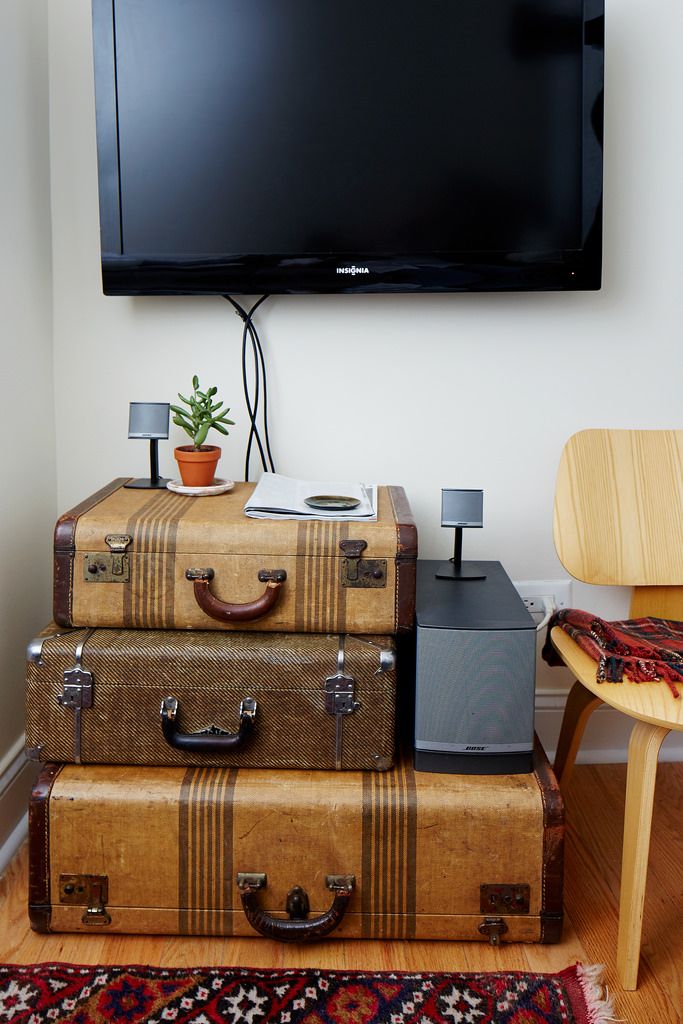 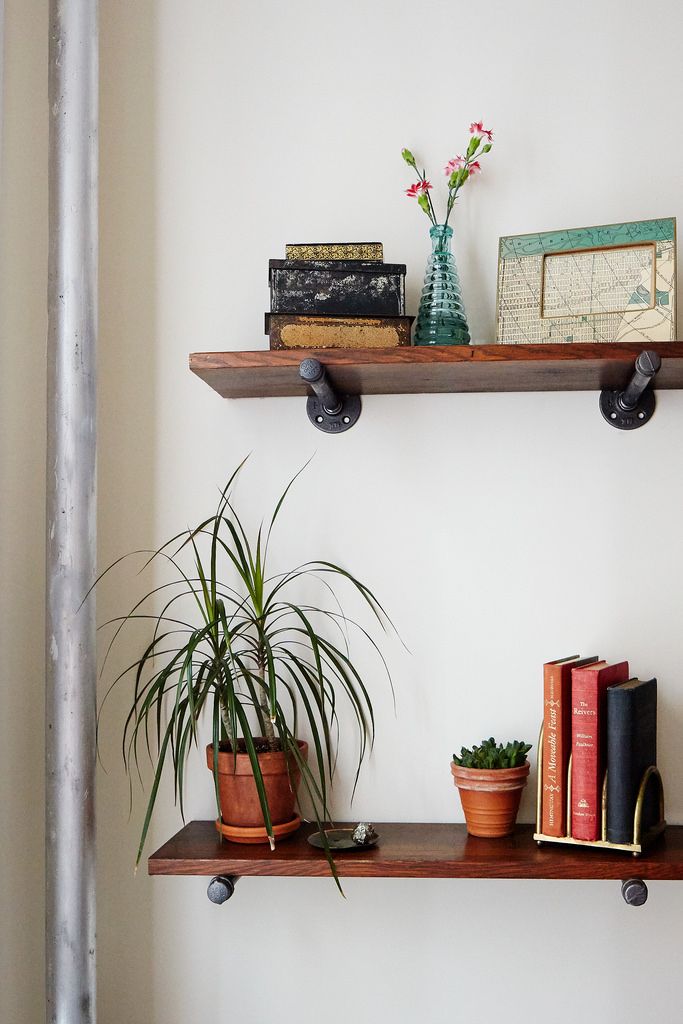 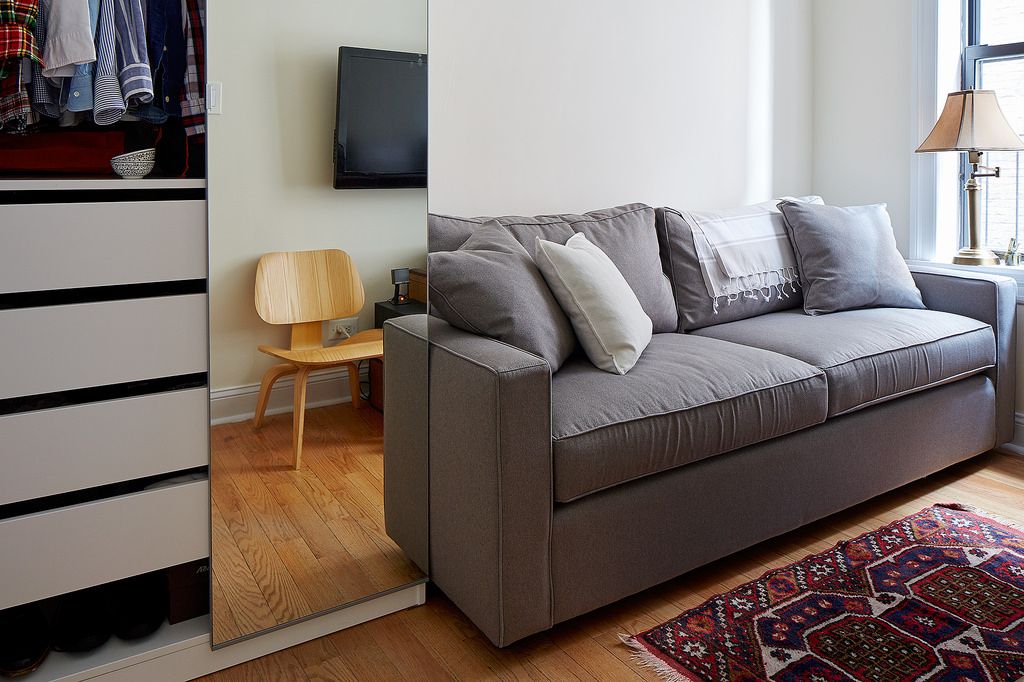 Jason's "beloved Eames chair," which he found in a trash heap and will never let go of, reflected in their mirror-plated credenza.


"We were able to fit two of our biggest pieces without the area feeling constrained," Tyler reports—but the hidden storage and the enhanced lighting are the real victories here.

Open Shelving 3 Ways in the Bedroom 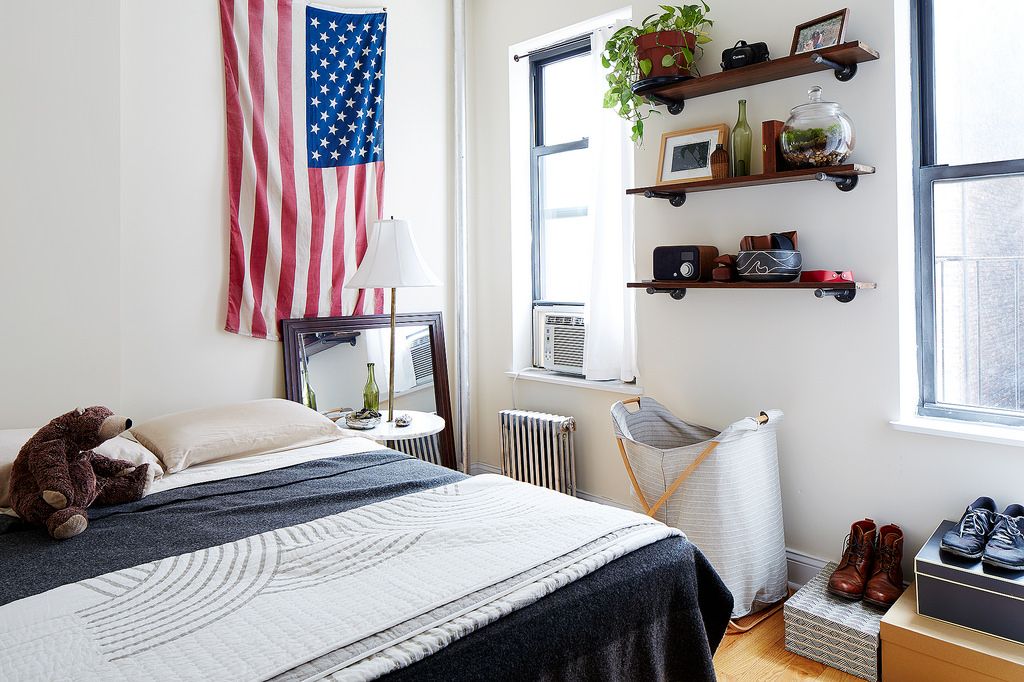 
One of the reasons the couple sprang for this apartment was the light; there's at least one window in every room—that's not guaranteed in NYC!—and two tall, south-facing ones in the bedroom. To keep things crisp and sunny, they went with cool white walls in the bedroom, graphic accents, and open shelving three different ways. And if you're wondering about that quilt above, which is soft and fluffy right out of the bag, we sell here it in the Shop! (Full disclosure: I brought it with me for the shoot because I wasn't sure they had a comforter.) 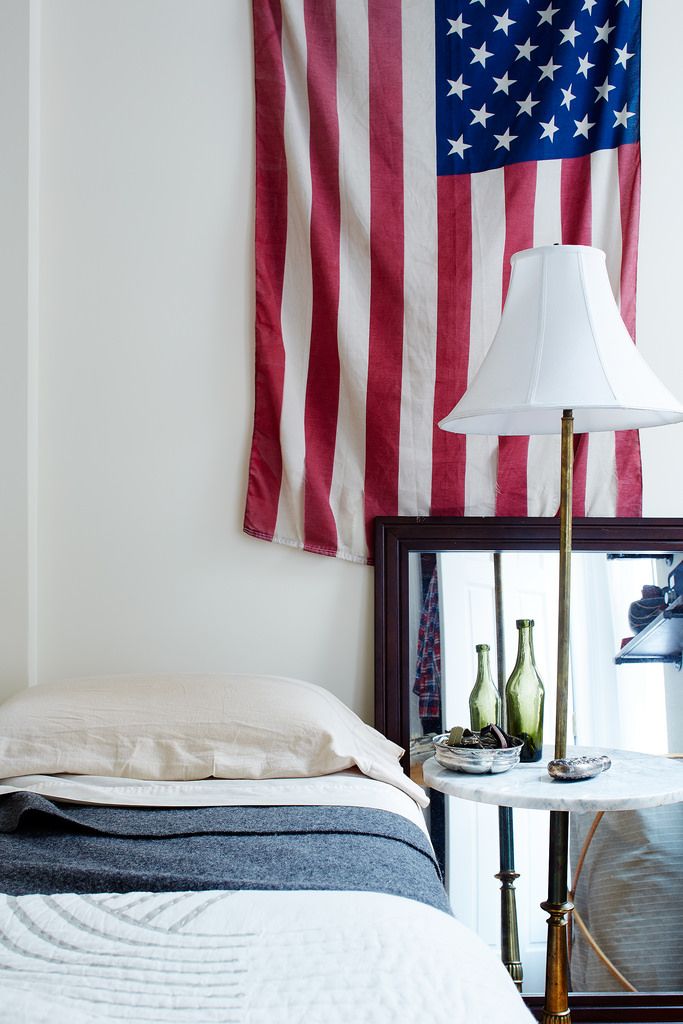 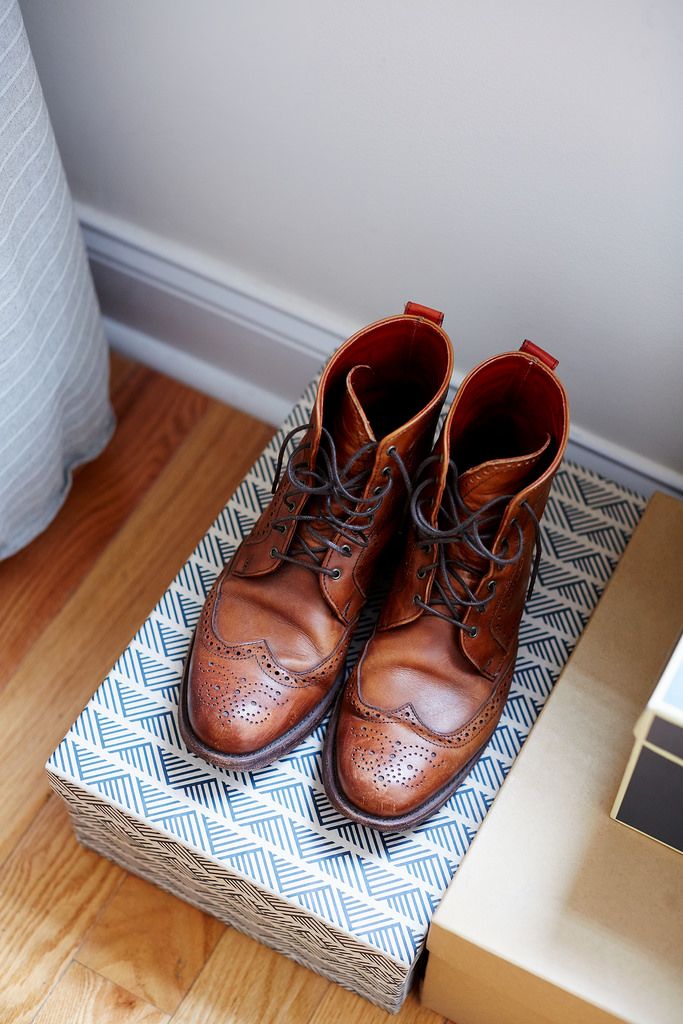 If you can't find storage boxes this pretty and sturdy, try wrapping a regular shoe box in paper you love. 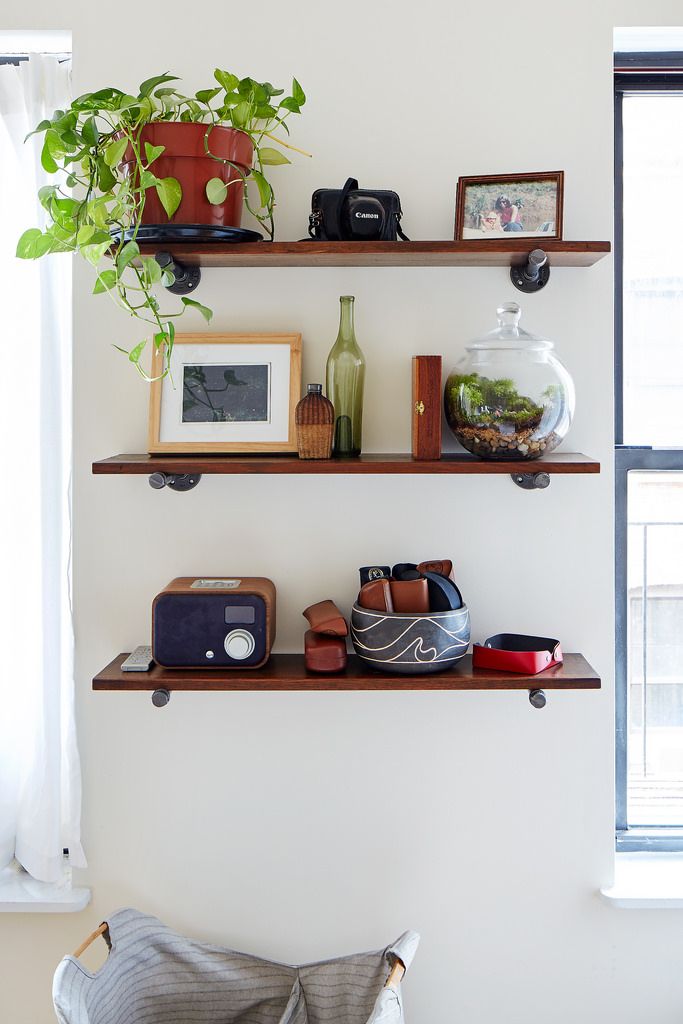 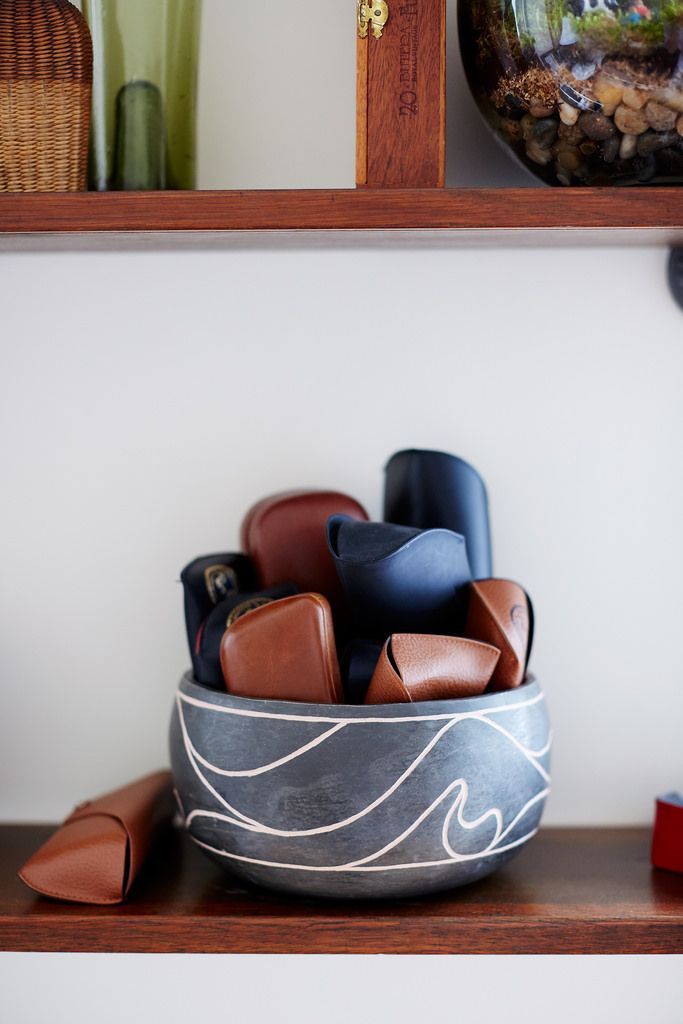 Our photographer, Mark Weinberg, and I were captivated and delighted by Jason and Tyler's overflowing sunglasses collection. 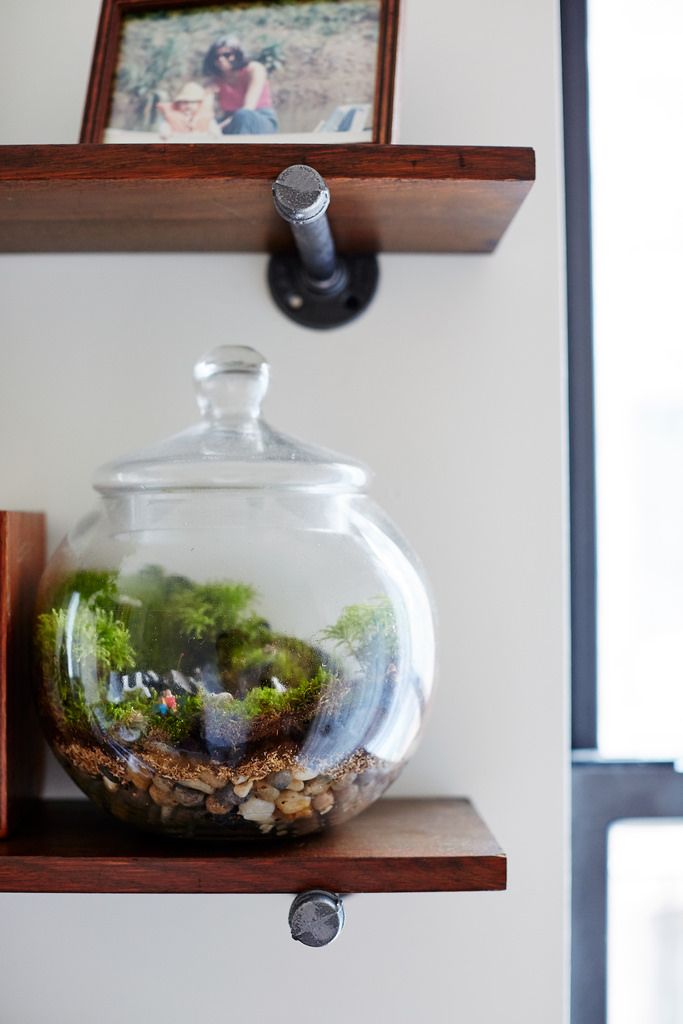 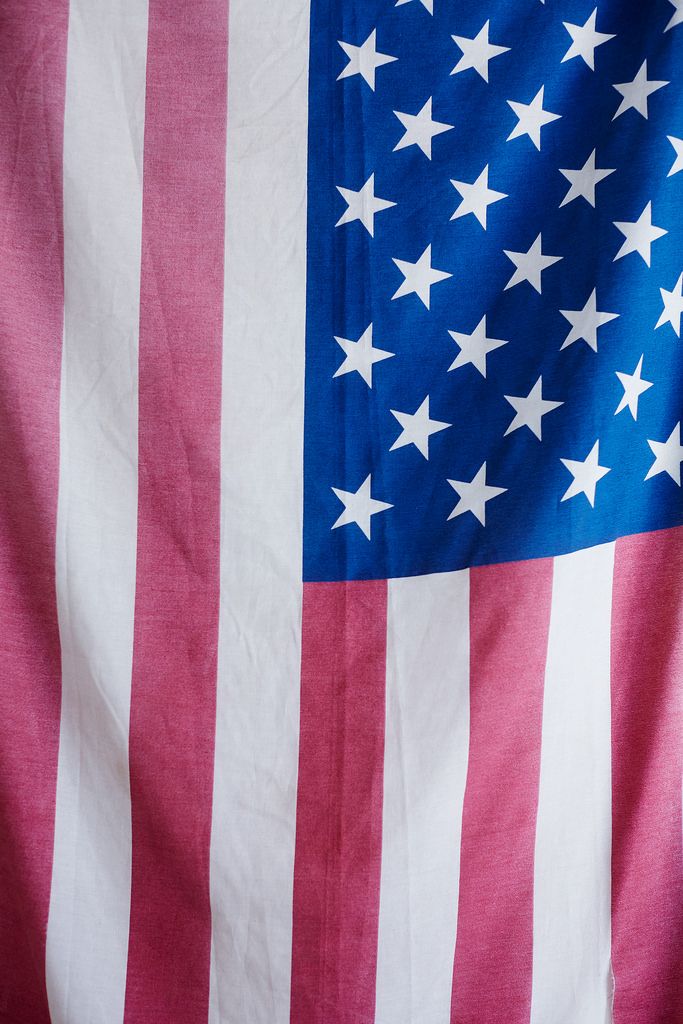 Their terrarium, complete with little figurines in a mossy landscape, was a favor given to guests at a wedding they attended prior to moving. 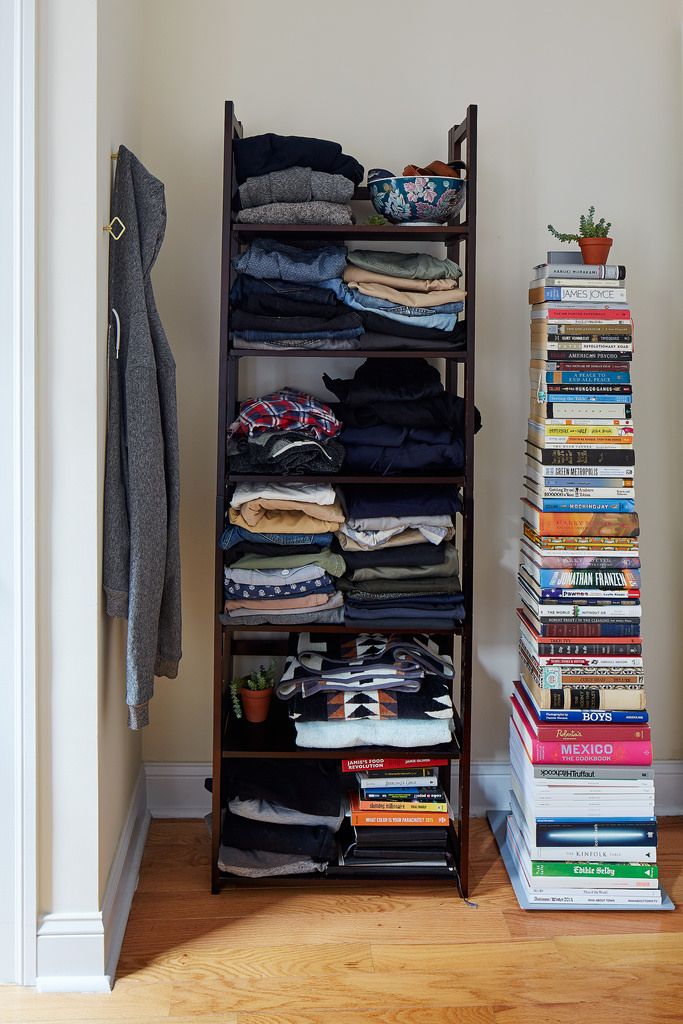 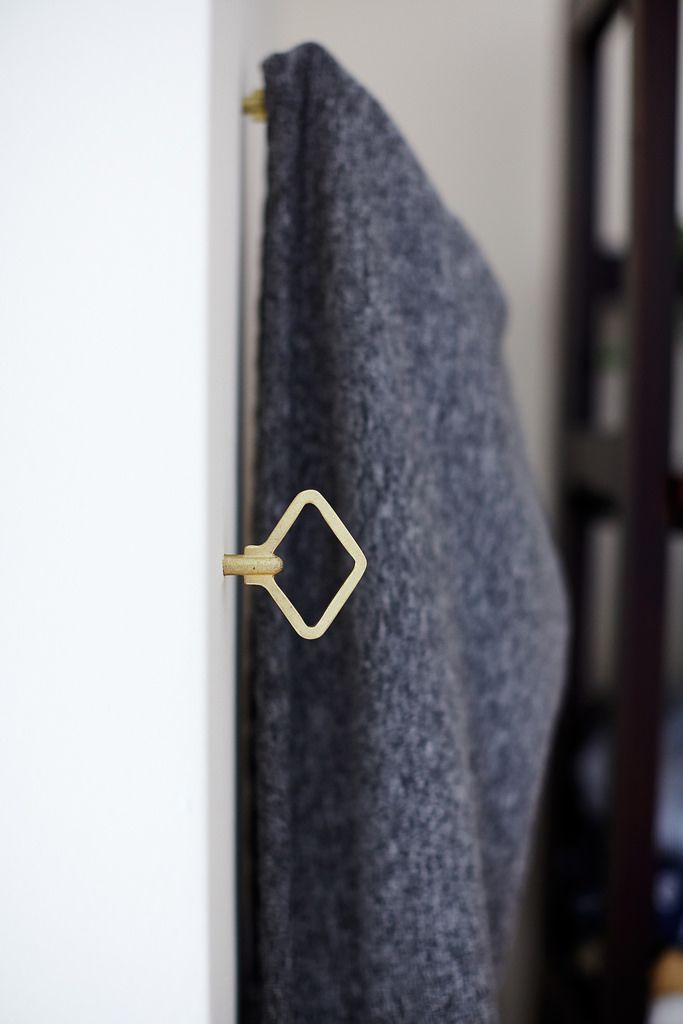 An invisible bookshelf and diamond-shaped Japanese Wall Hooks (that you can find in our Shop) create storage out of thin air.

A Little Warmth In a Rental Kitchen

In a rental apartment when you're on a budget, the style of the kitchen cabinets is not likely going to be something that makes or breaks the deal—they wouldn't have chosen this finish, or this countertop, if it were up to them. But a lot of good light and plenty of space (there's actually another wall of cabinets and a countertop that faces this one) sold them on this kitchen as a place they would be happy to cook regularly. 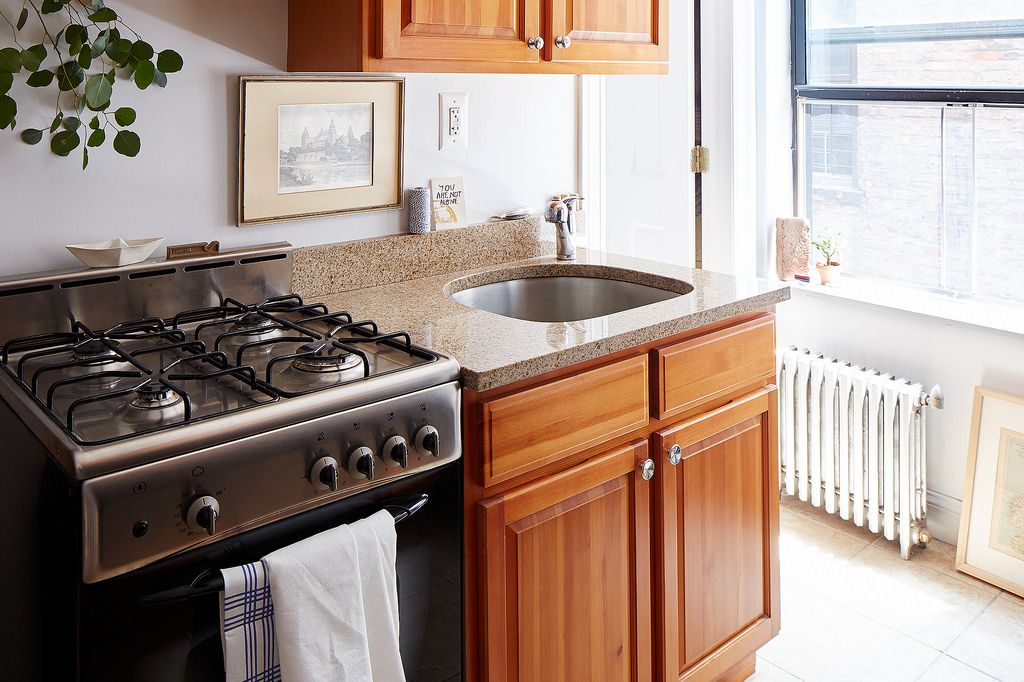 Shop their tea towels (flour sack and striped) in our Shop.


An Expandable Place To Eat 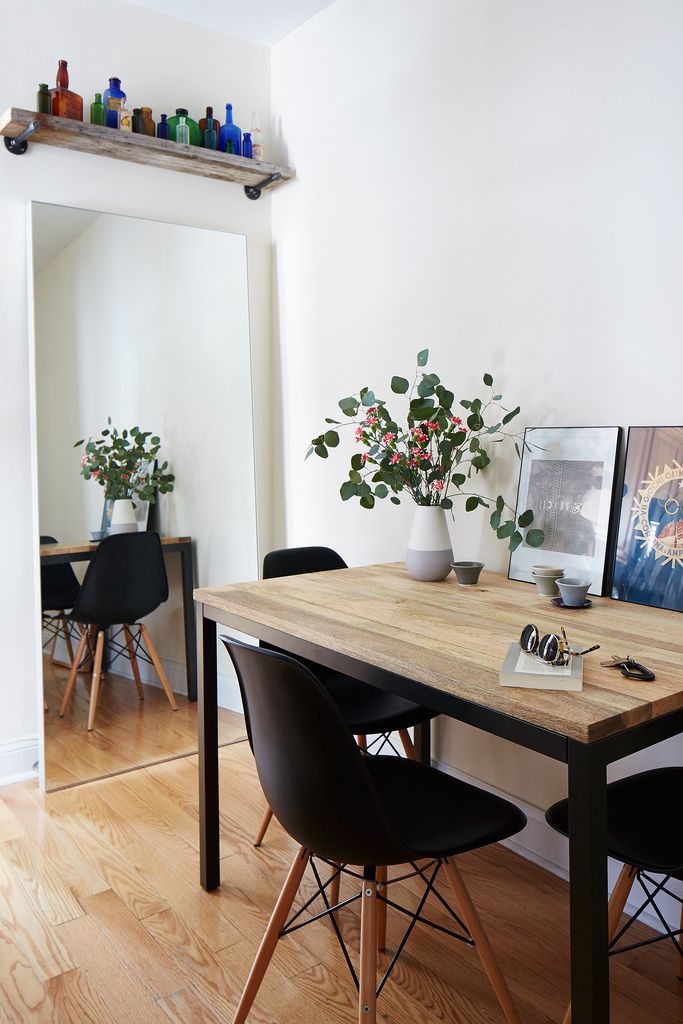 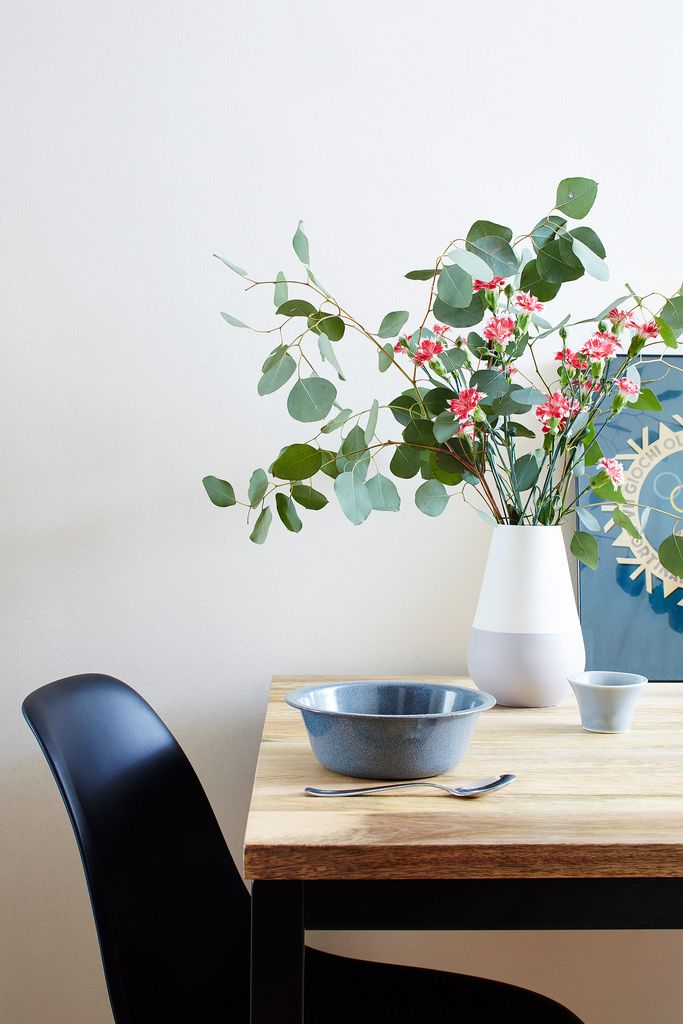 The ceramic vase and glossy votive holders (that double as condiment bowls) can be found in our Shop.


Right when you enter Jason & Tyler's apartment, you're greeted by a table and chairs backed by a tall, leaning mirror that seems to double the size of the room—this is where they eat, and I loved that it was the first space you encounter ("We really like how it's the central point in the apartment," Jason says). Better still, it's expandable without feeling fold-up: 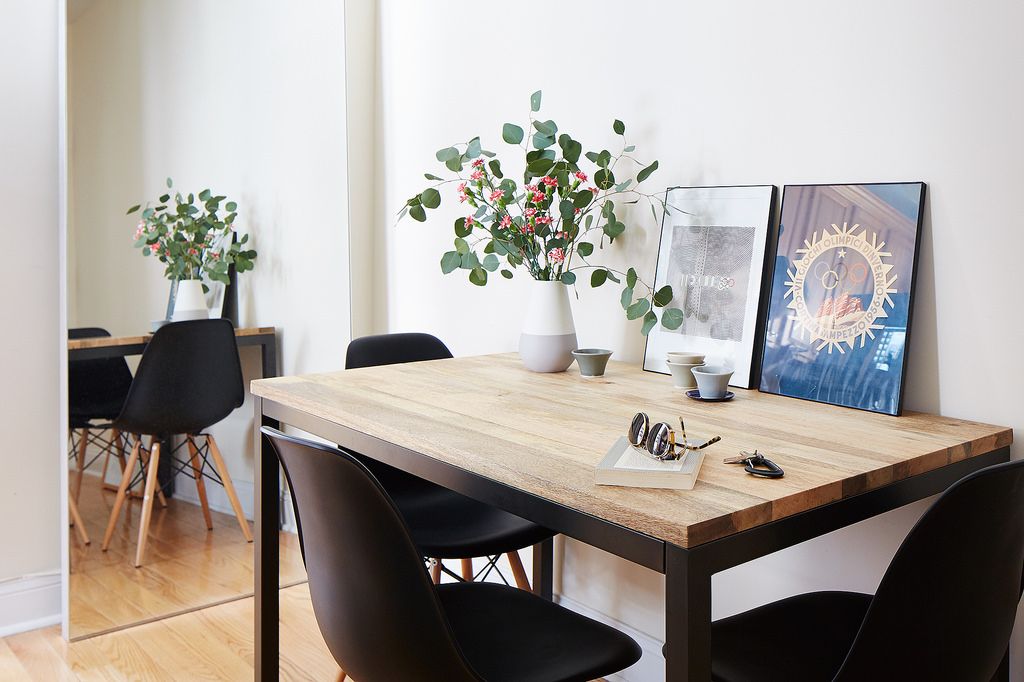 This post originally ran as in 2015 as "Moving In Together: Finishing Touches for a Small Space" last summer, but we brought it back because apartments have resolutions, too.

Debra D. October 9, 2017
Where can I find the dining chairs? Thanks for reposting article! So many great ideas!

PJ February 5, 2017
I lived in an earthquake state for over 15 years with open shelves, etc. “Earthquake glue” held many treasures, large and small, firmly in place.
Lots of interesting ideas for small spaces!

Smaug February 6, 2017
Significant earthquakes tend to be further apart than that. You can use sticky wax for some stuff and it helps, but certainly not potted plants. Looks like the shelves are just held by gravity, too- pipe fittings seem to be chic in New York these days, but have limited practicality. Then again, my local Safeway has wine bottles standing all the way to the edge of their wooden shelves, 6 feet off the floor; maybe they know something- like that earthquakes are obsolete.

Smaug February 3, 2017
Well, they do warn you- I wonder how many of us are actually neat enough to get away with all those open shelves? Being a resident of earthquake country, they're out of the question anyway.

Dawn R. February 15, 2016
I think, what they have done is very nice & personal.
I also think that people who cannot help putting negative comments as some have put should not be shown, as they do not deserve to have people's time wasted on their negative opinions.

Smaug February 3, 2017
Some might think that if you can't find the courtesy to respect other peoples' opinions, there's no reason for them to respect yours.

Carolyn K. January 30, 2016
The best storage trick I have learned is storing quilts and comforters. Switch out comforters and blankets and store them in between your box spring and mattress. They take up ZERO room and make your bed softer.

Carolyn K. January 30, 2016
This place is a dump. Their shoes are just piled in the floor. The flag is hanging on the wall. Invisible bookcase? Really? It just looks like a pile of books. That sweater rack is hedious. Why not get a small tasteful cabinet for the sweaters and arrange the books on top? That framed picture above the stove is a greasy mess after about a minute.

Smaug February 3, 2017
I think that's the idea with the invisible bookshelf, but I'd like to know what's back there.

Taylor R. January 6, 2016
Ugh, those hooks, those towels, everything about this apartment is gold! I espectially love the idea of turning a bedroom into a cozy sitting room. #decoratinggoals

Leslie S. August 5, 2015
I love the dining nook! And such a beautiful flower arrangement! Makes me want to run home and re-do my own!

Hannah W. July 31, 2015
I want this apartment! Also, glad to hear that it's okay to keep shoeboxes out.. I need help organizing my apartment, Amanda!

Horto July 29, 2015
Flag is hanging the wrong way.
Facing the flag stars on left as your hand over your heart

AntoniaJames July 29, 2015
My sons really like the hanging canvas shoe bags with stacked compartments, similar to these: http://www.containerstore.com/s/closet/hanging-bags/10-compartment-canvas-hanging-shoe-bag/12d?productId=10005137 I bought them a heavier, khaki version when they went away to school . . . . not sure where; they hold 8 pairs of their (large!) shoes.
More floor space for this tiny apartment! ;o)

Kenzi W. July 29, 2015
I stole so many ideas from this apartment just now, so thank you for that.

AntoniaJames July 29, 2015
Someone, please, remove that framed object over the sink / immediately adjacent to the stove at once. Even with a hood (which I don't see), it's going to have a film of grease on it within a week, assuming that the occupants of that kitchen actually cook. Yikes. ;o)

amysarah July 29, 2015
Beyond a greasy film on the glass, heat, moisture condensation and grease will degrade and discolor the paper the print is on over time. So, if it's a piece you want to preserve, you might want to rethink putting it so close to your stove top. But cute apt! Like the molded Eames chairs!