6 Things We Love About the (Brand) New Rizzoli Bookstore

Welcoming a new iteration of the Rizzoli Bookstore to the neighborhood. 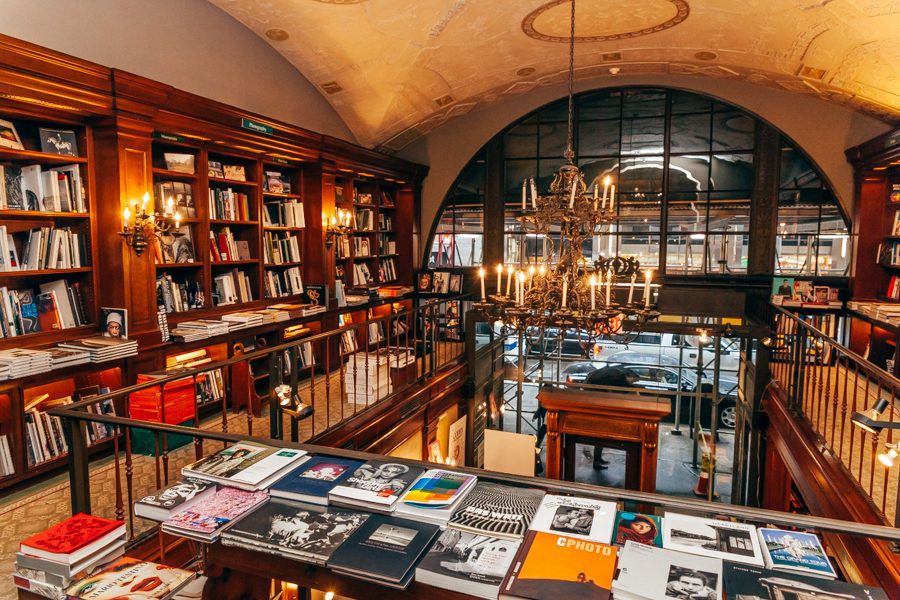 The old Rizzoli bookstore was tall-ceilinged and sweeping, with rich details that gave it a cozy feel.

For 50 years, the Rizzoli bookstore in Manhattan stood as a beacon in the world of independent bookstores. Its 57th Street location, where it was located for nearly 30 years, was as grand as a palace but so wam with character that you wanted to plop right down and start reading. The interior of the space was defined by intricate vaulted ceilings, an enormous arched window, cherry wood shelves everywhere, and a general sense of old-timey where's-my-scotch opulence. 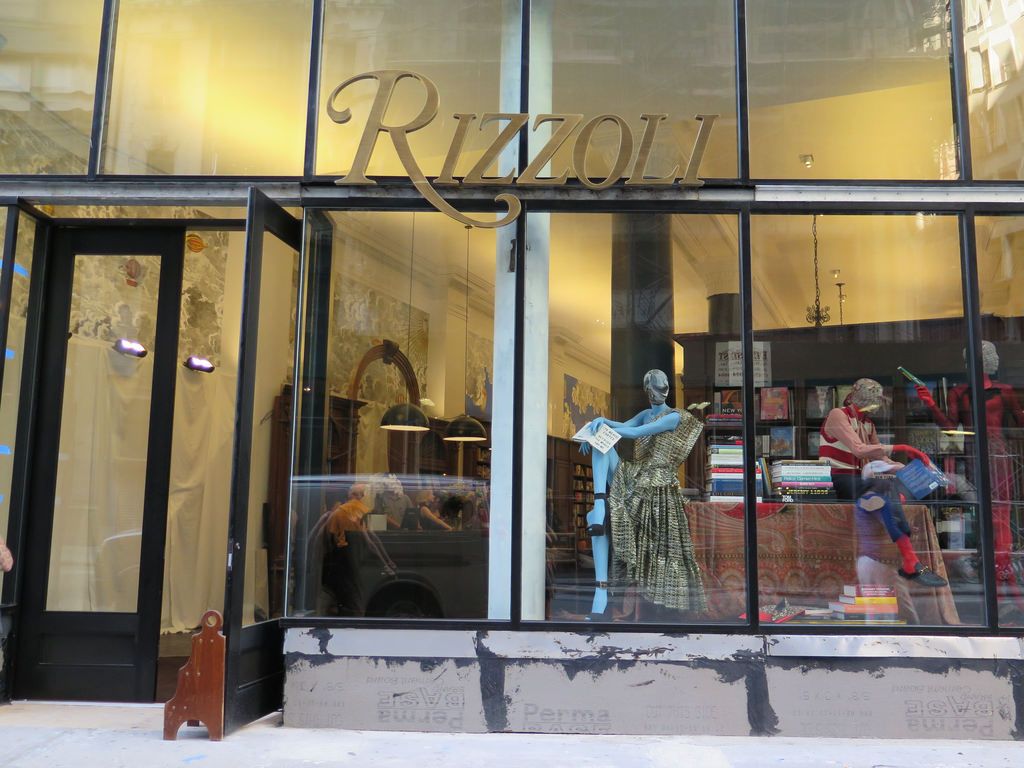 The new Rizzoli store, while not 100% complete, is finally open to the public as of yesterday.

Last year, despite protest from the community, the Rizzoli bookstore was shut down and 109-year old building was razed to make room for a luxury condo tower. Plans for a new location were soon underway, however, and the new Rizzoli bookstore just opened yesterday on the corner of 26th street and Broadway—which is right around the corner from our offices.

While the new store is in many ways nothing like its predecessor, there are certain design elements that do carry the store's legacy into a new age. Here's what we love about the new Rizzoli bookstore:

1. The window dispay is just as opulent and delightful as we hoped. 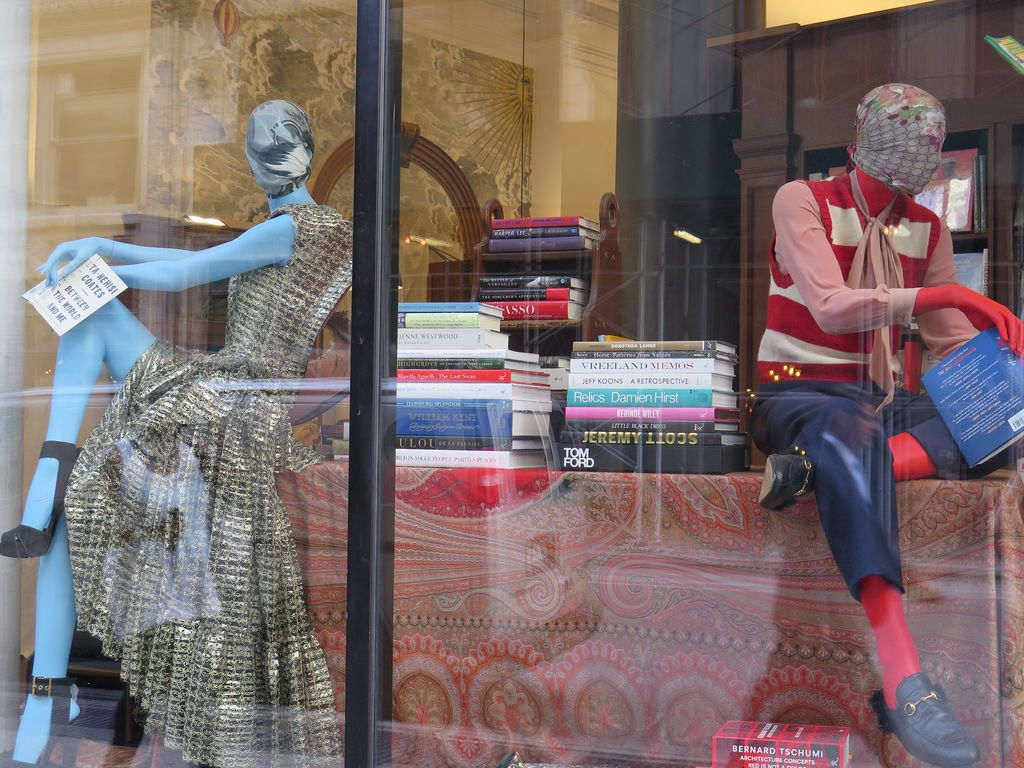 Designed by André Leon Talley, the display of blue and red manequins wrapped in designer scarves next to stacks of books was intended to convey "a love of book hoarding."

2. They kept the cherry wood cabinets and the brass chandeliers. 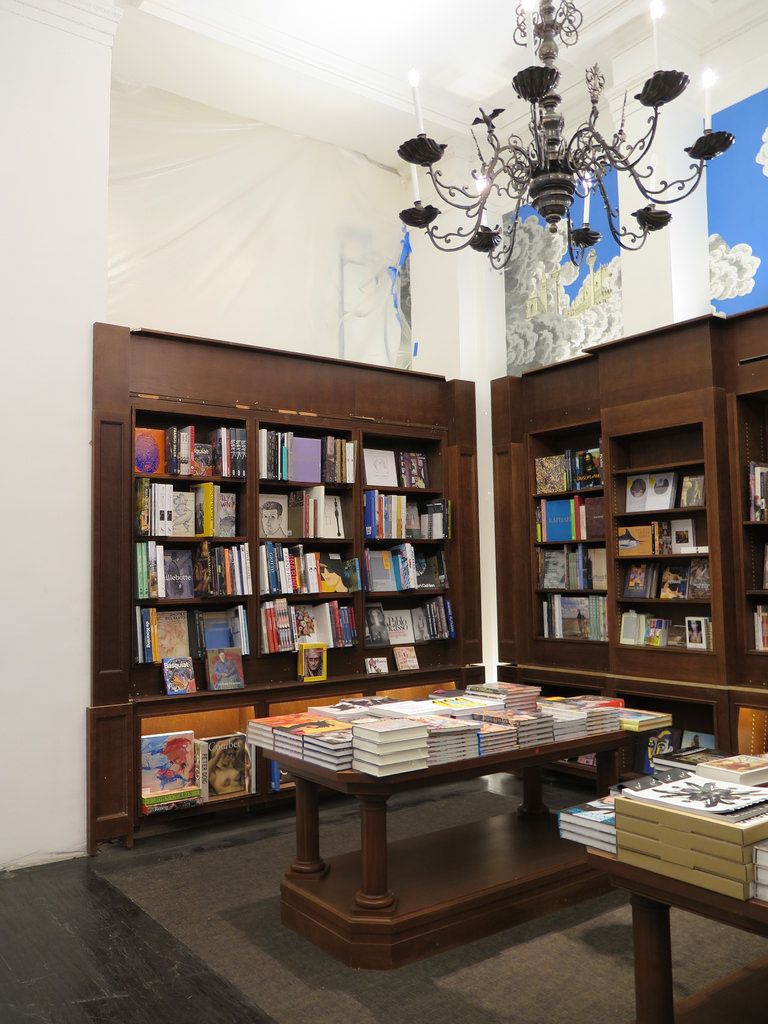 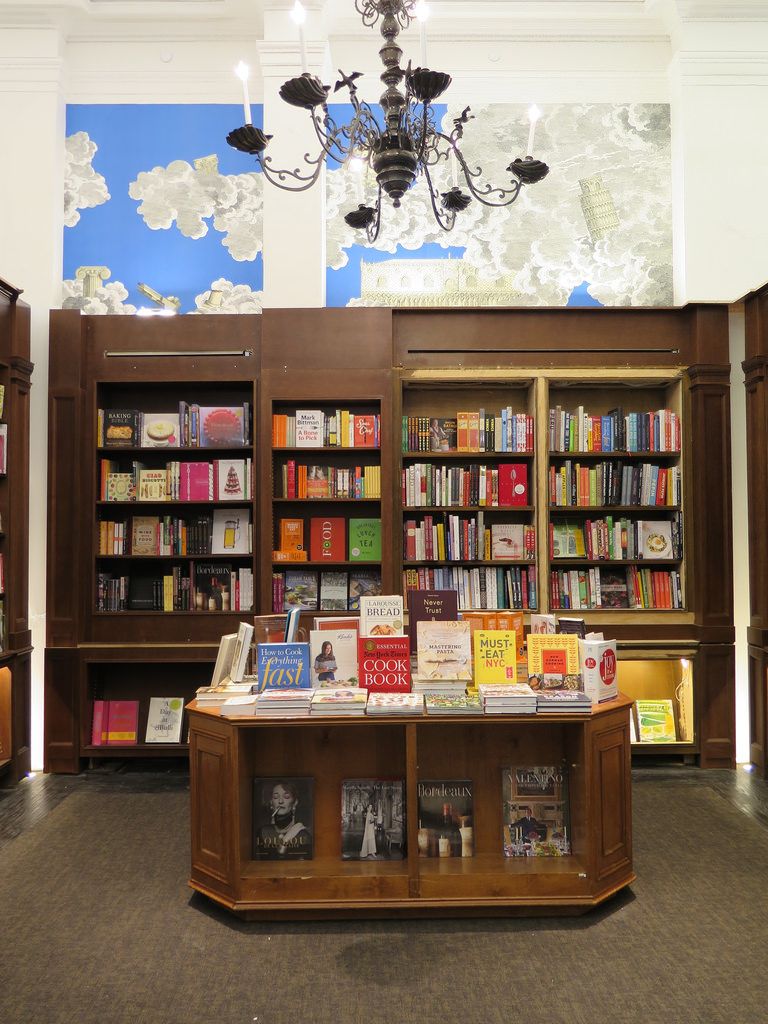 Though the old store was gutted to the bones, it was nice to see the iconic wood bookshelves and iron chandeliers survived—and made it to their new home.

3. They embraced the design of the new space, rather than forcing the old look. 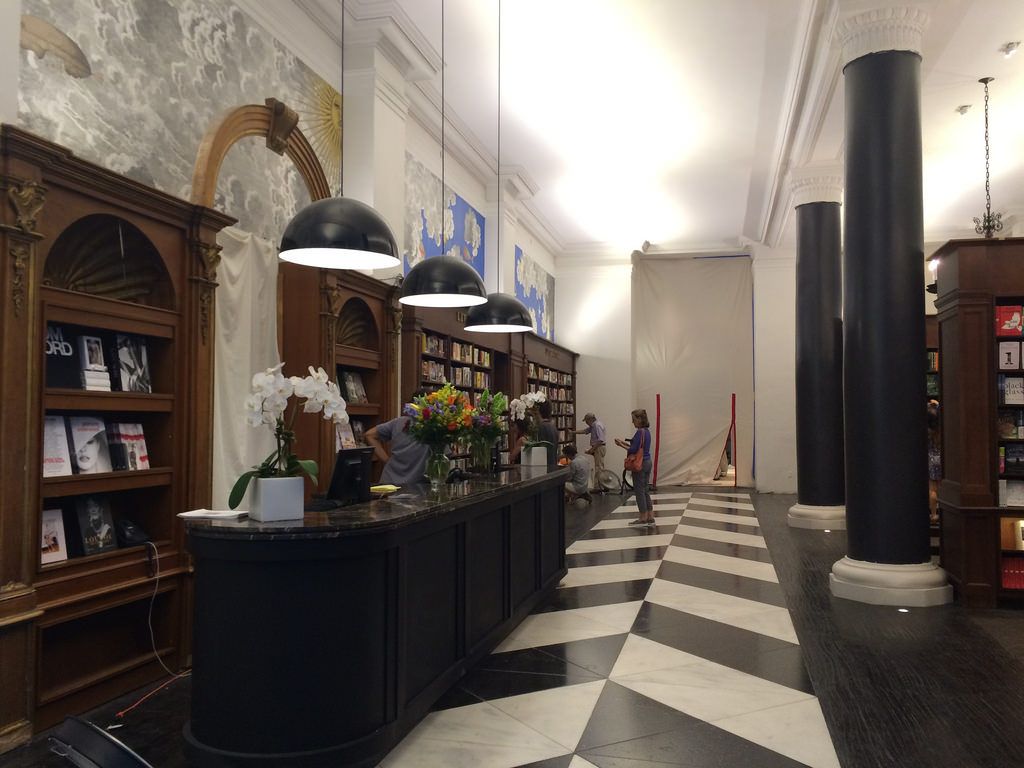 The lofty, illuminated space is nothing like the old store, but the designers did embrace the new, airy design instead of forcing a musty, cluttered look that would have been at odds with the architecture. 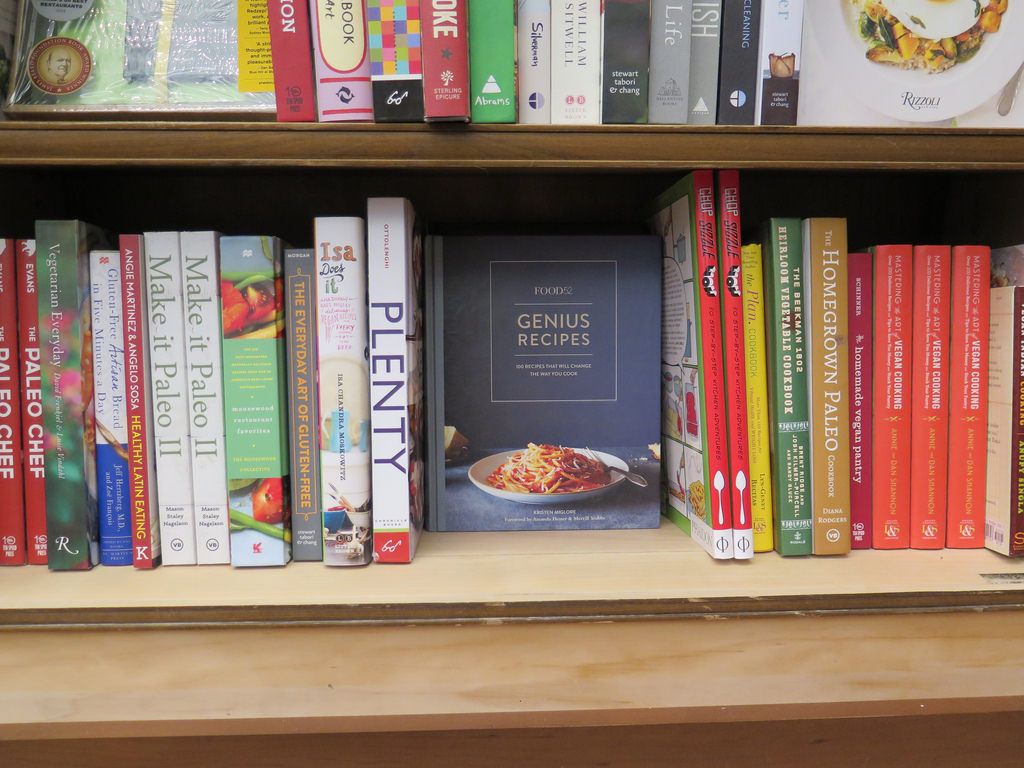 Okay, so I did a little rearranging. 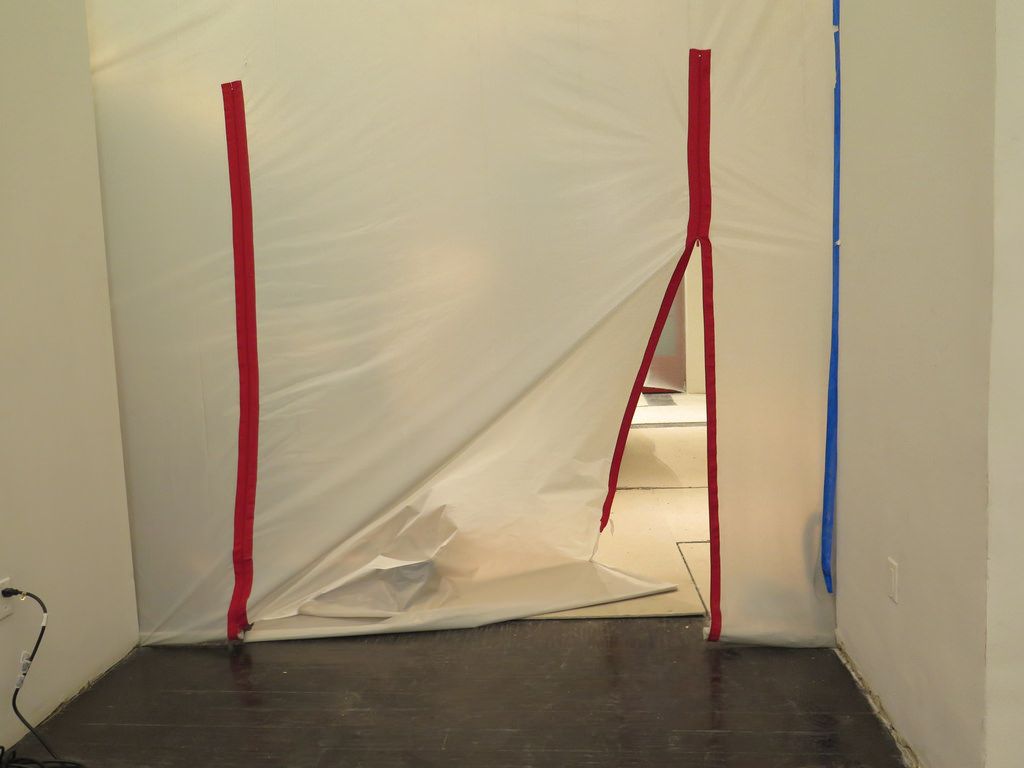 As you might see in some of the pictures above, there are still unfinished places that don't match the renderings. But heck, our own office didn't feel finished until weeks after we moved in, and we're excited to see the next phases unveiled. 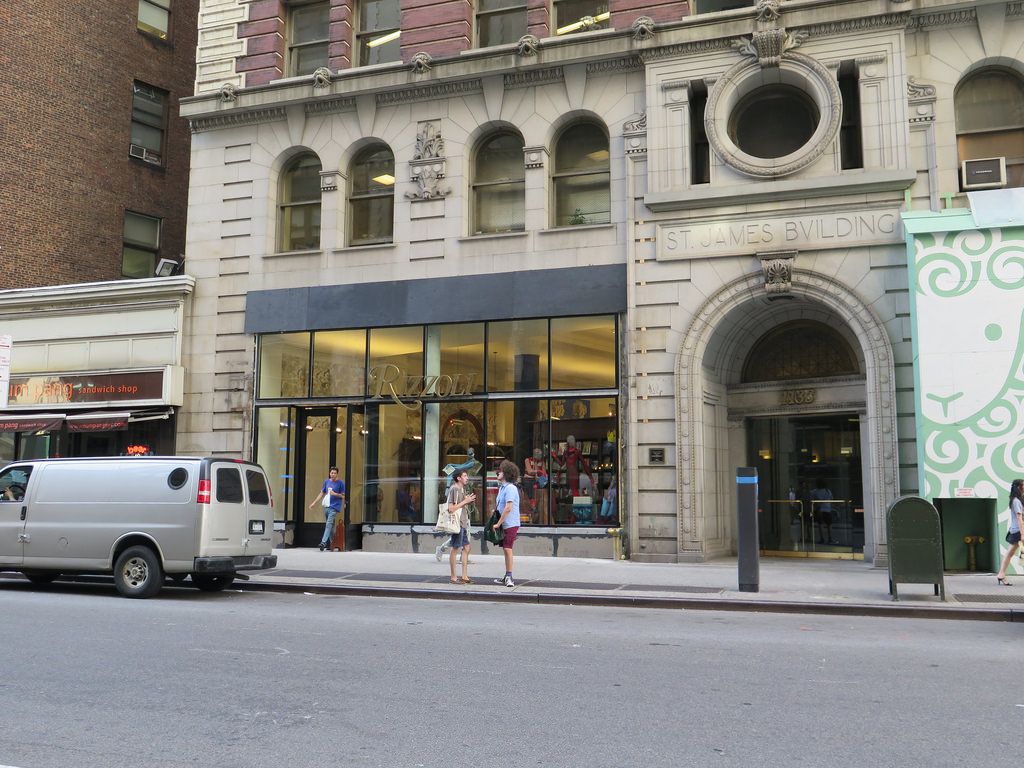 Housed in the St. James building on Broadway, the new Rizzoli store followed the trend of so many media, print, and art businesses and quit midtown for a location in the 20s. No complaints here!


First photo by Curbed; all other photos by author

amysarah July 28, 2015
Love seeing Rizzoli back and more convenient to my orbit, but also a bit bittersweet. SO much personal history – rainy childhood Saturdays with my dad (back then, the late great Brentano’s was just across 5th Ave too); 1st post-college job around the corner, ‘hiding’ in a corner on the floor upstairs, reading all of Portrait of a Lady in 1/2 hr lunch break installments (the snooty clerks had to know, but somehow let me be); in grad school, the only source for many journals and monographs that seemed so important at the time (long since forgotten)… Not sure how I feel about the new design yet. Agree about not forcing the classic on the new, but it’s a slippery slope to B&N. Warning: cranky old lady walking, but that fashion-y window makes me a bit queasy - nostalgic for when a display of straight up books was alluring enough. Okay, rambling here, but worth mentioning that Rizzoli did indeed have another downtown shop for a while on W. Broadway (a few iterations of SoHo ago) that looked more like this than the uptown icons.
Author Comment

Bevi July 28, 2015
Yet another complement to a great neighborhood.

mrslarkin July 28, 2015
This is so exciting! Yet another reason to come visit you guys.

beth July 28, 2015
So glad to see that they're back! I used to visit the 57th St. store almost every time I was in NYC for work…or pleasure! Don't get up there much anymore, but when I do, I'll make it a point to visit their new store.

I remember entering it from 5th Avenue (almost directly across from Tiffany.
Is my memory finally failing me or was it just that they had an entrance on 57th and one on 5th ?