Strange But Good: Are You in the #CottageCheeseClub?

It was Nixon's favorite snack. Is it yours? 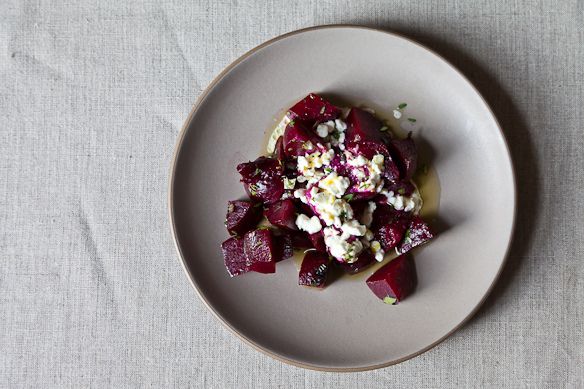 We were all in agreement that cottage cheese is strange. What is it? we mused one morning after an editors' meeting. Cheese curds? Where on the line of dairy product between milk and cheese does it stand? (Is it even cheese?) But our collective befuddlement at cottage cheese is where our team's agreement on the subject ended.

Some of us were very pro, and admittedly more vocal than the anti-cottage cheese folks:

Meanwhile, there were a few who resisted the #cottagecheeseclub:

Which team are you on? How do you eat cottage cheese? Claim your allegiances in the comments.

robin L. August 12, 2015
My 2nd favorite way of eating cottage cheese (2nd to eating it with potato chips!) is in these Swiss chard rollups that I discovered many years ago: http://www.moosewoodcooks.com/2014/10/swiss-chard-rolls-two-ways/

Cook53 August 11, 2015
Depends on the cottage cheese. To eat as it is, you need a brand that's got some texture. For cooking, the smoother variety can work. My vote-- I like it!

AntoniaJames August 8, 2015
For quite a long time, I ate cottage cheese with plain yogurt and fruit (fresh when seasonal, crushed pineapple in winter) for breakfast just about every day. I don't any more, but I do put cottage cheese in Pullman loaves and dinner rolls at least several times a year, each. The curds sort of disappear, while almost magically giving the bread the most luscious crumb. Note to self: post those recipes.
Also, this hidden gem on Food52 using cottage cheese instead of cream cheese in a cheesecake-ish dessert has become a firm favorite of family and friends. (I use ginger snaps instead of graham crackers in the crust, to make it a bit less ordinary and a lot better tasting.) https://food52.com/recipes/4223-mom-s-skinny-cheesecake ;o)

junewl August 4, 2015
with pico de gallo, pickled beets (anemia and osteoporosis problems addressed), pineapple, cantaloupe/honey dew, with any left over braised veg for lunch the next day. lots of pepper mandatory, especially with fruit. Chef Merito chile/sal/limon absolutely fab sprinkled on and dipped with Fritos. i could go on.

Melinda F. August 4, 2015
Does anybody remember when you could buy cottage cheese with carrots & celery added? I like it with salt, pepper and Italian salad dressing.

Jennifer M. August 4, 2015
I love it with roasted cauliflower and broccoli, add a pinch of salt, red pepper flakes and lemon zest! It adds a nice texture and the whole hot/cold thing ;-)

Raquel C. August 3, 2015
With granola, nuts, torn up dates, and torn up dried pineapple tossed in it! Drizzle a little honey on top for something extra sweet.

Faith B. August 3, 2015
Nope, not gonna pass my lips, the association with deprivation is just too strong for me.

Jennifer M. August 4, 2015
Me too! Way better than sour cream dips! I line to add dill and granulated garlic when I eat it with chips!

Katu August 3, 2015
Oh I wanted to add, I love the large curd much more than the smaller curd. I have plans to 'attempt' to make it some day!

Katu August 3, 2015
I too, love cottage cheese. I only became a fan a couple of years ago. I love it many different ways. My most used way is to spoon a 1/4 c on top of my salads. I recently had it for a small lunch aside pickled beets and a few cracks of black pepper. Yum!

Katu August 3, 2015
My favorite brand is Kalona Super Natural. I usually like full fat dairy better than any reduced fat. But the 2%, is better than full fat in my opinion.

Karen G. August 3, 2015
Wide buttered noodles mixed with sour cream and large curd sour cream. To die for.... could eat an entire pot by my self. A must have at least once a year!

Jen B. August 3, 2015
LOVE LOVE LOVE cottage cheese!!!!! always have, even as a little kid..... The bigger the curd the better & Salt and tons of black pepper only please! Have even made my own homemade....

Chase T. August 3, 2015
Forever. I love it with spinach and a quick raspberry vinaigrette.

Karen B. August 3, 2015
On whole grain toast or flatbread, with strawberry jam or marmalade. Also, with egg noodles and cinnamon and sugar, like an instant stovetop noodle kugel.