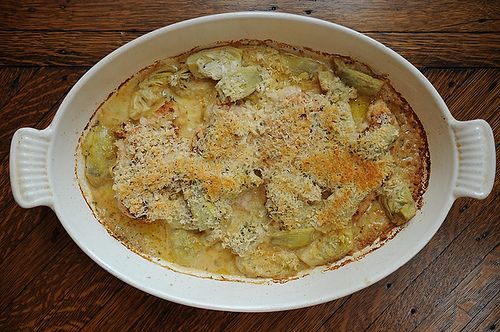 I am going to speak for some length about the artichoke, an engaging little thistle I heretofore have more or less ignored, for a host of reasons I am about to explain, but have been completely turned around on thanks to Lemon Artichoke Chicken.

My artichoke antipathy began from almost the first time I examined one with any serious consideration, which I feel relatively certain was during a meal at the TGI Fridays in the bottom of the Empire State Building. Even though, of course, that can't actually be true. But it was a restaurant. In New York.

As one friend pointed out over that dinner all those years ago, at what point did the human pick up this pointy, unattractive object and proclaim it food? It’s just not attractive.

Then, there is the whole laborious way of eating it with one’s front teeth, and the fact that so many restaurants choose to serve up it up with insipid sauces, a bit of a wet towel after a luke warm bath.

Further, I have been too intimidated to try them at home. Once while visiting California, a friend who cooks them often actually did a lovely steamed version, but in the process nearly destroyed one of my pots. Be off, artichoke!

But recently, irked by my inability to find something new to do with chicken breasts and feeling the need to share, I learned from a friend that she likes to dump some jarred artichokes, capers, garlic and some salt and pepper on hers, popped in the oven for 20 minutes or so.

This was a hit in my house, but I craved something slightly less virtuous, something that would pull chicken breasts, the ultimate culinary wallflower, on to the dance floor to do the oven-baked Single Ladies dance.

Now Lizthechef makes clear she has disdain for jarred artichoke hearts, and insists you use frozen ones here, a direction, I will confess ONLY TO YOU, that I almost ignored. But then I thought, well, she’s Lizthechef, I am Jenny the angry homecook, who am I to defy her? As it turns out, frozen artichoke hearts are indeed deeply superior to their jarred sisters, and you should buy a bunch immediately for your freezer.

So, this recipe lets all of you follow the Jenny drill to a T – come home, defrost those babies in the microwave (or leave them in the fridge while at work) and get that chicken into the pan. Now you may take your work shoes off, and pour a glass of wine. Once that chicken is browned up nicely, place it in your small oven-ready dish, being careful not to crowd the breasts.

If you are Jenny, you will have been unable to find Meyer lemons in Washington DC, which will have caused you to stand for a while in Whole Foods, thinking thoughts about lemons, which then will have led to musings about strawberries and all the rosemary you were able to get in Los Angeles in November, and pretty soon you will have begun to lament every life choice you’ve ever made and start crying.

If you are a person in full possession of your mental health, you will simply substitute Eureka lemons.

I didn’t really believe Lizthechef that I needed this much creme fraiche, so I added spoon by spoon by spoon, and probably used close to what she called for. I would say this is to taste. Watch your chicken once it hits the oven, as the cooking times may vary according to the thickness of your meat and your oven.

You will want to serve this nice and warm, which in my case meant right from the dish, because the fatty goodness of the cream and the tangy kick of the artichoke give the best bang that way. Serve it with some crusty bread.

1. Preheat oven to 350 degrees.
2. Pound chicken breasts to even thickness of 1/2 inch. Salt and pepper both sides of each breast.
3. Melt the butter in a large skillet.
4. Over medium heat, brown the chicken on both sides, about 4 minutes per side.
5. Transfer chicken to 9 X 11 ceramic or glass baking dish. Cover the chicken with the artichoke hearts.
6. Add the sherry, lemon zest and juice to juices in the frying pan. Stir over medium heat until hot, several minutes. Add the creme fraiche. Remove from heat and pour over chicken and artichokes.
7. Sprinkle with cheese and panko.
8. Bake 20-25 minutes, until hot and bubbling.

Adam E. May 11, 2012
I made this last night with grilled artichokes from the Fairway antipasti bar. Delicious, decadent, and a cinch to put together!

egriffny December 3, 2010
This recipe was fantastic! Very easy to prepare and the result was delicious - even with regular old lemons, canned artichokes and store-bought breadcrumbs. And my toughest critic - my 3 year old son - loved it. It will become a standard in our house.

Jestei December 4, 2010
excellent so glad you liked it!

cherimich November 28, 2010
Canned artichokes (hearts and/or bottoms) actually work quite well for this, too. The flavor of the liquid that they're packed in, which is a little briney, gets lost in the sherry/lemon juice addition. Mushrooms, shallots and thyme are great additions, as well.

Jestei December 4, 2010
i think if you get a good brand that is quite right

quiltcat November 28, 2010
Sounds absolutely delicious...and relatively quick and easy, too, which is right up my alley. There are Meyer lemons four to a pack at my local Wegmans (if you're able to get out to the 'burbs there's a Wegmans in Fairfax); i've still got beautiful rosemary in my garden (45 miles outside of DC); i know several people from their blogs who've happily grown Meyer lemons indoor on a sunny windowsill...there's a guy in Massachusetts who hand pollinates his tree and has been rewarded with a bountiful enough crop to make marmelade for holiday gifts! Please don't cry...you'll get back to CA eventually!

Jestei December 4, 2010
I just need to prepare next year. The first year is always shell shock. I did NOT know you could grow lemons in a windowsill however. This is important news.

NancyEddy November 28, 2010
Costco had Meyer Lemons a week ago--but of course you can't buy just one...

Jestei December 4, 2010
that's true. but the LATimes once printed 100 recipes for meyer lemons which I used to burn through when the trees were full of them in LA.

calendargirl November 23, 2010
Jenny, where in DC did you find Meyer lemons? I have kept an eye out at Whole Foods and Trader Joe's, Safeway and Giant. Who is your supplier, please? And Happy Thanksgiving!

Jestei November 23, 2010
i saw them literally hidden behind the other lemons at WF tenleytown.

MrsWheelbarrow November 23, 2010
Oh, Jenny - you just make me laugh outloud. And on this day before the day before Thanksgiving, with relatives arriving in hours, I sure did need this. I also need your ability to seek out brilliant week-night recipes like this one. How did I miss it? Lizthechef - Bravo! I'm a firm believer in the frozen artichoke heart, especially since Trader Joes arrived in DC. Trader Joes will also have plenty of Meyer lemons starting in January right through April or May. Happy Thanksgiving to everyone at Food52.

Jestei November 23, 2010
i actually found meyer lemons yesterday and made this again and i have to say they really do make a different dish. i hope you have an insanely happy day.

mariaraynal November 23, 2010
I, too, have artichoke phobia, Meyer lemon grief, and believe "Jenny: The Angry Home Cook," would make a great name for a book. Or blog, or something. Lizthechef, I am loving this recipe and cannot wait to try it.

Jestei November 23, 2010
thanks for the great comments and i hope you like this dish!

chloe H. November 23, 2010
this looks great! anything that incorporates artichokes has me hooked right away, cant wait to try this thanks for the post

amysarah November 22, 2010
This is very similar to a dish I sometimes make, only with large shrimp (or lump crab meat, if I'm feeling flush) and I usually include some sauteed mushrooms along with the artichoke hearts. The sherry is key, I think. Chicken sounds like a delicious alternative.

amysarah November 22, 2010
Forgot to mention, I've never thought to put lemon in - will try that. (For flavor, I usually just use a little chopped garlic and shallots, sauteed in with the mushrooms - works great with the sherry too.)

Jestei November 23, 2010
you know its interesting -- lizthechef revised this dish a bit between the time i tested it and sunday when i wrote it up. for instance it originally called for white wine, which i have now used twice with great results, tho sherry would have an equally good, if different game going. also (help liz?) i feel it also called for thyme, a worthy herbal addition if you're feeling it.

calendargirl November 22, 2010
This is indeed a wonderful recipe. I have served it at least half a dozen times since discovering it, and I use boneless and skinless chicken thighs, as that is what my family prefers. (It works well, the cooking time is slightly less.) Thank you so much, Lizthechef.

MyCommunalTable November 22, 2010
I have never been the one that loves when the whole stuffed artichoke comes to the table and everyone ohhhs. I keep thinking, "What I have to pull it apart with all that stuff that could get on my clothes, then run it through my teeth." Now I do love the taste of them, so this is my kind of recipe. I am envious of Lizthechef's meyer lemon tree, but Chicago has the same issues as Wash DC. So frozen artichokes it is.Now I can have artichokes the way I like them... delicious.

gingerroot November 22, 2010
I have often wondered how we ever figured out how to enjoy an artichoke myself. That said, I am a fan, so thanks for pointing me to a great recipe (YUM, Lizthechef!).

Lizthechef November 22, 2010
Thanks, Jenny, so glad you have conquered your artichoke phobia...Will hope to see you back in CA one of these days!

Jestei November 22, 2010
It will happen. Thanks for this great recipe I think I will make it again tonight.

Jestei November 22, 2010
i think there are many variations on this theme for sure.

mrslarkin November 22, 2010
mmm...yum. I so enjoy your writing, Jenny. You elevate my Monday mornings to an almost TGIM.

drbabs November 22, 2010
Isn't this a great recipe? Having grown up in New Orleans (don't ask me why, but artichokes are a major food group there), I practically cut my teeth on artichokes, love them, and am always looking for new ways to use them. I just discovered this recipe yesterday--it's a great one! Thanks for sharing it.

drbabs November 22, 2010
P.S., Have a happy Thanksgiving, and grow some rosemary next year--you'll still be able to snip sprigs of it in November. (I think we can grow meyer lemons indoors, too; am looking into that.) Be happy!

Jestei November 22, 2010
i am fully converted. and yes i plan to grow many many herbs this spring.

lapadia November 22, 2010
Delicious...thanks for showcasing this recipe! Happy Thanksgiving to you all!