Is Your Morning Coffee Still Safe to Drink in the Afternoon?

Learn about old coffee in all its forms—this is a safe space. 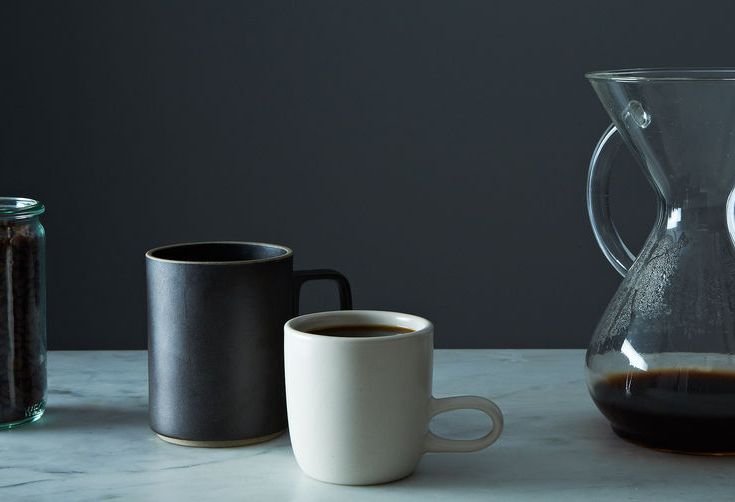 It happens every afternoon: Around 4 o'clock, I start to fade and begin considering my caffeine options, always landing on the abandoned, half-consumed coffee at my desk. Every morning, I brew a cup, put a splash of milk in it, take a sip or two, then get distracted by my to-do list (looming deadlines are more effective than caffeine, I've found). And every day, I wonder, "Can I drink that? At what point does the potential risk outweigh the promise of caffeine? I turned to Google to find an (unofficial, but workable) answer: 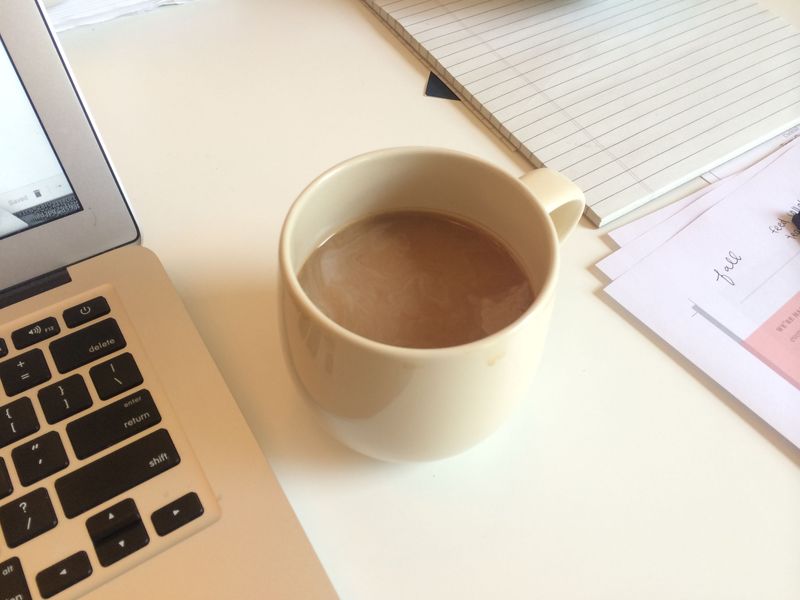 My coffee, circa 3 P.M. this afternoon

What if the coffee has milk in it? When properly stored and refrigerated, milk can last for up to a week past its expiration date, but milk should not be left at room temperature for more than two hours. So if your coffee has milk in it, play it safe and drink it while it's fresh.

Is the flavor of the coffee affected? Just as coffee beans go rancid after about two weeks, brewed coffee can start to taste bad after about 30 minutes, or the time it takes for the coffee to cool. Then you have about a 4-hour window before the oils in the coffee start to go bad, which further alters the taste. (We'd like to state, for the record, that Oliver Strand—coffee writer and guest on our Burnt Toast episode about coffee—would not condone our drinking of cooled coffee. Our product manager Michael Hoffman, on the other hand, confesses to drinking day-old cups during the same episode.)

Will microwaving the coffee kill bacteria? While microwaves can kill pockets of bacteria, because they heat from the outside in, they often leave pockets of cold in the middle of food and drinks where bacteria can thrive. So they shouldn't be relied upon to kill whatever might be living in that cup.

Does the water in the coffee spoil? Water can absorb flavors from its environment which change its flavor (especially if it's left in a particularly pungent place like the refrigerator), but even uncapped, glasses of water are drinkable for weeks after they're poured. Unless water has something living in it, like flowers, it's difficult for bacteria to survive in it. Drink up.

So, is coffee safe to drink after several hours? Black coffee should be safe to drink, though it probably won't taste all that good. If it has milk in it, make a fresh pot instead—but if you're determined to still drink it (as I often am), make sure to microwave it all the way through, for an extra-classy, extra-safe 4 PM pick-me-up.

What is your stance on drinking hours-old coffee? Tell us in the coments below!

Yuhhhh May 28, 2021
I just drank a cup from yesterday morning. Pot was on all night. Other than being a little stronger, it’s fine lol. I’ve drank, at midnight, cold coffee with cream and sugar I made at 6 am the previous morning. It won’t kill you, you might get a little rumbly in the tumbly and a free colonic depending on your constitution, but I’ve made it to 37 and done this more times per week than I would like to admit. Never even had more than an urgent grumpy later on in the day.

Sunil April 26, 2021
My son drink a mixture of 100gm of concrete coffee and tea extract and sugar and honey and water and then he heat it till it forms a dark and thick solutions and then he put in close container for 3 weeks and then he drink it after some time . after a month he have red rash and cough , vomiting and thick saliva and chest full ness and cold and mild eye starts paining lashes falls radiply plez advice me which treatment should I do

Yuhhhh May 28, 2021
Ummmmm emergency room. Immediately. I realize it’s a month later but that sounds more like an allergic reaction than bad coffee.

Christina July 12, 2019
I am not a rich person although I conserve I found coffee leaving ice cold or frozen up to 2 weeks still favorable and safe to drink I have done this for fifty yrs I’m 72 and it did not kill me yet. So with all the process food our children are eating I suppose coffee which is quite expensive can last a long period of time refrigerate and I say flavored brewed coffee tastes even better refrigerated then heated. So I’m not a professional but I’ve learned a bit about food and drinks. Thank you new world. Our ancestors did not have modern technology they survived.

Shoppersuz July 12, 2019
Christina, I value your life experiences and accumulated knowledge far more than any parroted misinformation. And I couldn’t agree more with your assessment of survival! Thanks for sharing.

SERENITY June 2, 2020
Hello Christina,
Thank you for your reply about coffee I was just going to ask this question

Sunil April 26, 2021
My son drink a mixture of 100gm of concrete coffee and tea extract and sugar and honey and water and then he heat it till it forms a dark and thick solutions and then he put in close container for 3 weeks and then he drink it after some time . after a month he have red rash and cough , vomiting and thick saliva and chest full ness and cold and mild eye starts paining lashes falls radiply please help me give advice for treatment

Lee L. January 6, 2019
I tend to make 2 shots of espresso the night before and store it in the refrigerator so as I'm running out the door for work I can toss it in my chocolate protein drink first a guilt free iced mocha type beverage.

RS September 11, 2018
I drink my hours old coffee daily. It's usually a craft roasted coffee that's complex to being with. Over the hours as it settles to room temp it and beyond it seems to get sweeter and the nuances of the flavors mature. I think you're missing out if you that coffee. Of course, this won't yield the same result with Folgers or other bitter / lower quality coffee.

Coffeelife July 4, 2020
Yes! Quality of coffee totally matters! I also prefer my coffee when it’s closer to room temp because it actually brings out more flavor (and caffeine! lol)

Genghis J. November 28, 2016
30 minutes? I will microwave on Monday coffee that was made Friday morning. Just checking here to verify that I'm not doing anything too life-threatening.

Coffeelife July 4, 2020
I have had 2 day old coffee a few times before (no milk or anything added) and felt great. I also didn’t hear it because I smelled and tasted it and there wasn’t anything off about it. But I have had coffee grounds grow mold before! I didn’t drain the water from them completely and after a little over a week there was mold! Yuck! So you can draw your conclusions :) hope that helps!

Sunil April 26, 2021
My son drink a mixture of 100gm of concrete coffee and tea extract and sugar and honey and water and then he heat it till it forms a dark and thick solutions and then he put in close container for 3 weeks and then he drink it after some time . after a month he have red rash and cough , vomiting and thick saliva and chest full ness and cold and mild eye starts paining lashes falls radiply please help me give me advice for treatment

Genghis J. November 28, 2016
30 minutes? I will microwave on Monday coffee that was made Friday morning. Just checking here to verify that I'm not doing anything too life-threatening.

Shoppersuz May 16, 2016
Ok, I think this is gross, but a family I work for brews a fresh pot on Monday then continues to brew on top of that pot every day for the week. Unused coffee never gets refrigerated. They don't seem to mind the taste but I wonder if it's contributing to headaches they frequently get. Aside from the awful taste (that they don't mind) is there any real danger doing this? Rancid acids or oils? HELP !

Ashley C. April 29, 2016
I'm here because I made some coffee at day's end and hardly drank any. My yearning to avoid wasting food led me here. Dumping it and making a new one--- what was I thinking?

Ashley B. January 7, 2017
That's okay, I microwaved Friday morning coffee on Saturday morning at my job.

Nancy E. August 17, 2015
When my grandkids come at 7am, I grab the leftover coffee in the pot, nuke it and add Cremora and sugar and drink it without a second thought. Later...I brew a fresh pot and then repeat this procedure the next morning!

swagv August 17, 2015
And yet nobody raises eyebrows when drinking cold brewed coffee that was brewed three weeks ago.
It's like the bread that never goes stale: something ain't right.

Chris August 17, 2015
I'm willing to drink my leftover black coffee throughout much of the day... Recently I've started refrigerating the extra and drink that cold, tastes better than room temp, I'm sure it's safer too. sometimes the next morning while new stuff is (or isn't) brewing.

Andrew B. August 15, 2015
I've "heard" that coffee right after it is freshly brewed is full of wonderful antioxidants! But shortly after those antioxidants break down and become oxidants. I can't find any articles, studies or data to confirm that fact. Does anyone here have any knowledge of this one way or another?

Coffeelife July 4, 2020
I know that antioxidants do break down after a while, but have never heard of them becoming oxidants. Thank you for bringing up that point! Perhaps a fresh cup of coffee would be a better way to go!

Sharon B. August 7, 2015
How about if you use Coffeemate rather than milk?

ChefJune August 9, 2015
why would you want all those chemicals?

creamtea August 7, 2015
It just tastes sour and nasty once it's cooled. Don't bother. I like the process of making coffee almost as much as the drinking.

Allie S. August 7, 2015
Don't do it! Try some single cup brew methods (like a V60, beehouse, or Chemex) and just brew what you need. It will give you an excuse to take a quick mental break later in the day when you're jonesing for your next cup.