Today: An editor and her boyfriend lay the notorious Danish beer rivalry between Mikkeller and Evil Twin to rest—but not before a round of pints.

It started out innocently enough: In 2006, Mikkel Borg Bjergsø, a Danish high school teacher, began selling his home-brewed beer at his identical twin brother Jeppe Jarnit-Bjergsø's beer store, Ølbutikken, in Vesterbro, Copenhagen. Mikkel benefitted from the exposure, while his beer, Mikkeller, which had a few hits right off the bat, put Jeppe's store on the map as a source of interesting craft beers. When Mikkel opened a Mikkeller bar in the same neighborhood, the twins's relationship became strained—not to mention that they're polar opposites (Mikkel is described as quiet and contemplative, while Jeppe is an extrovert). It was shortly after that Jeppe opened his own brewery in tongue-in-cheek reference to the growing rift, Evil Twin.

At the surface, the two breweries are fairly similar—both run as gypsy companies, providing recipes to breweries, who then create one-off brews that are often unique and experimental. In 2014, The New York Times reported that Mikkeller produced roughly one beer every three days the previous year. But their similar nature hasn't kept beer drinkers from choosing sides—my boyfriend and I included.

When Jonah (aforementioned boyfriend) and I moved to Copenhagen for a study abroad program in 2012, Evil Twin was celebrating its second anniversary and Jeppe was preparing to move with his family to Brooklyn to open his Greenpoint bar, Tørst. And while, to be honest, we spent the better part of our four months in Denmark drinking a notorious liquor I hope you never have the misfortune of trying yourself, upon returning to the states (and to a steady income), we became increasingly interested in Danish craft beers—I with Evil Twin, Jonah with Mikkeller. After months of hearing the other lay claim to what they believed was the better beer, we decided to say "skål" and put the two breweries to a (completely unscientific) taste test: 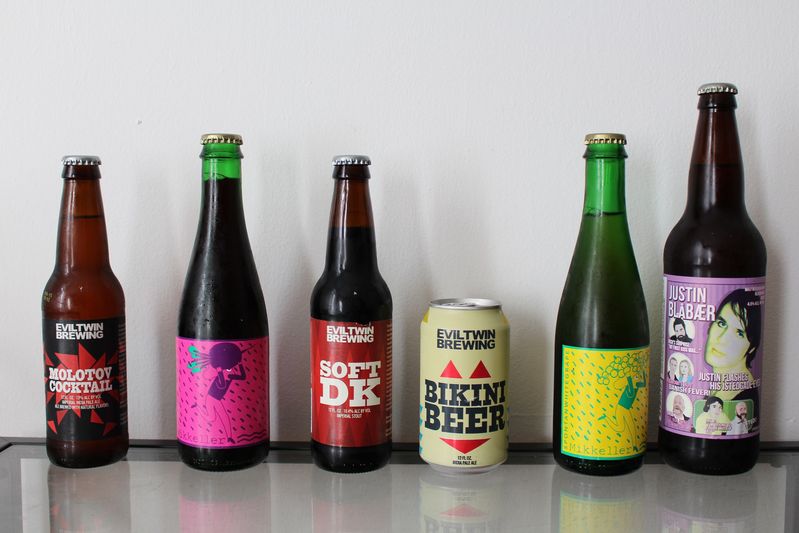 Not all of the beers above were consumed during our taste test (but a lot of them were).

Round 1: Evil Twin's Bikini Beer versus Mikkeller’s Spontanwhitegrape; Judge: Jonah
No contest. After tasting the instantly unusual Mikkeller, Leslie’s first words were, “This tastes exactly like something I’ve had before.” Things weren’t looking good for me. But the Bikini Beer (in all fairness, she never claimed a particular allegiance to this beer) was a solid, refreshing beach beer. Nothing more; nothing startlingly awesome. Despite her initial hesitation, we polished off the Mikkeller awfully fast, while the Bikini Beer was never even finished (this literally never happens in our home)!
Round 1 Victor: Mikkeller*

*Editor's (A.K.A., Leslie's ) note: I would just like to point out that while the Spontanwhitegrape was chosen because it's Jonah's favorite of Mikkeller's “Spontan” (short for spontaneous) series beers, the Bikini Beer was selected for drinkability on a hot summer's day, rather than for originality.

Round 2: Evil Twin's James Beer versus Mikkeller’s Spontanelderflower; Judge: Leslie
After Jonah's stunt with the Spontanwhitegrape, I had to pull out the big guns with my personal favorite from Evil Twin, the James Beer, which I only recently discovered while going behind the counter at Jeppe's bar in Brooklyn, Tørst. Mike Amidei, their head beverage manager, served me the Berliner-style Weisse ale after the description of "strawberries and olives" caught my eye. While Jonah's choice, a Lambic-style beer, was delicious and slightly sour with floral notes, my James Beer won out for its depth of flavor, which starts out with sour strawberries, then adapts into briny olives. Trust me on this one.
Round 2 Victor: Evil Twin

Round 3: Evil Twin's Justin Blåbær versus Mikkeller's Spontanmandarin; Judge: Leslie
Before we go on, I would just like to bring attention to the variety of Evil Twins presented against Jonah's one-tone choice of the Spontan series—take that as you will. Onwards.

Once again, Jonah's choice was delicious—it's a Lambic spiked with mandarins, after all. The zest from the mandarins shined through and it was slightly carbonated with just a little hoppiness. The Justin Blåbær (Blåbær being a type of blueberry cultivated in Denmark), had the same refreshing citrus notes as the Spontan, along with the sourness of a traditional Berliner-style Weisse, with blueberries at the end. This was a close call, but I had to give it to Evil Twin for the blueberry finish.
Round 3 Victor: Evil Twin

Three cheers for Evil Twin (although yes, this is my article so yes, I got to vote twice)! But Jonah would like to point out that we have plans to go to a Mikkeller bar next week—and I'm not about to turn that down.

Do you prefer Mikkeller or Evil Twin? Do you just think everyone should get along? Tell us in the comments below!

Angela September 1, 2015
I am a very big Mikkeller fan, I have visited his bar in Vesterbrogarde (sp.) and you get a lot of his beers in London and Manchester. I really like Evil Twin, but his beers are harder to get hold of, so I have drunk much more Mikkeller. I also really like To Ol and Omnipollo - that one's Swedish though.

Leslie S. September 9, 2015
Yes! Just tried the To Ol Saison and loved it! Will look out for Omnipollo!

Taylor R. September 1, 2015
This is fantastisk! I'm going to have to side with Jonah on this one: Mikkeller had me at "hej", and kept me after a pine-needle brewed christmas ale, but now I feel like I need to try more Evil Twin (and Tørst).