We're Over the Moon For Suzhou-Style Mooncakes

Not all mooncakes are filled with red bean paste. Today, Betty shares a less familiar mooncake—flaky and pork-stuffed—for the Mid-Autumn Festival. 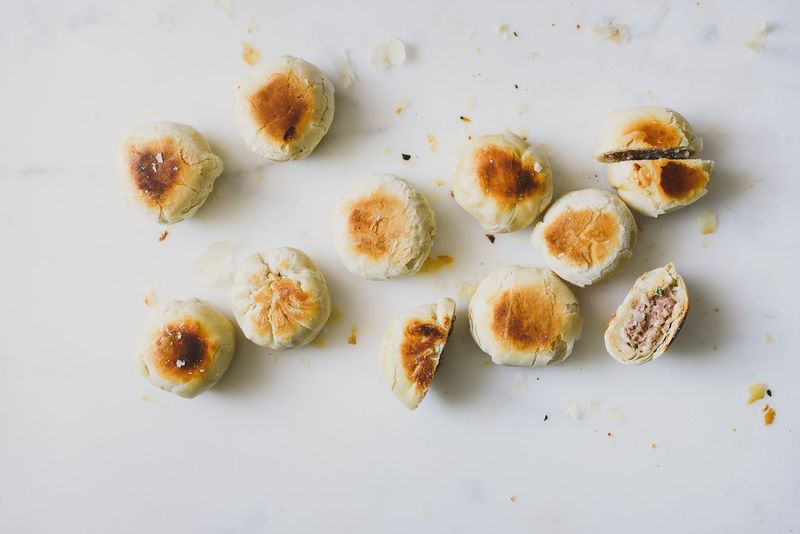 On September 27th, take some time to step outside and gaze up at the night sky. That’s the day that the Mid-Autumn Festival, celebrated throughout Asia, falls this year. 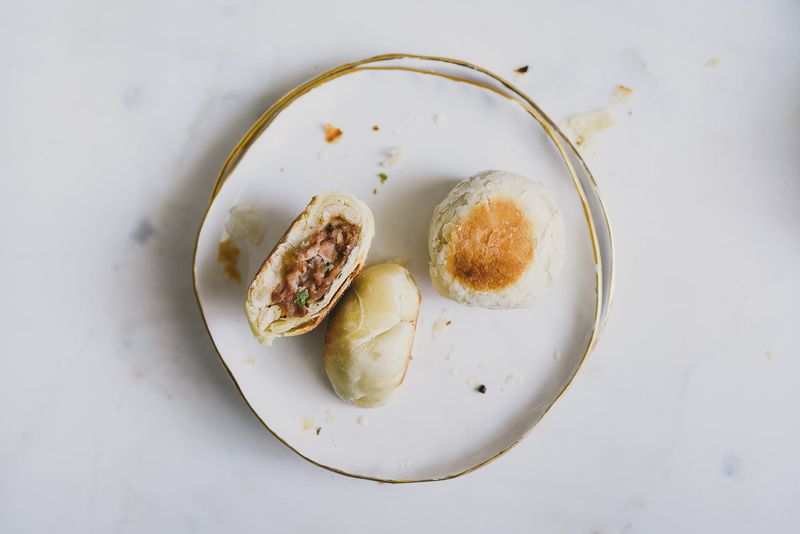 While this Cantonese mooncake may be the most ubiquitous and well known type, there are, in fact, many other kinds of mooncakes. I’m excited to share one that is dear to me: the Suzhou-style mooncake. It’s sold year-round at bakeries, but during the Mid-Autumn Festival, they’re consumed by the dozen.

These particular mooncakes are savory.  An aromatic pork filling is encased in a flaky crust that’s made by using a hybrid of two types of dough with different fat contents. One is called a “water dough” and the other, with much more fat, is called a “lard dough.” Pork lard is used traditionally, but you can substitute shortening, butter, oil, or whatever fat you prefer. (I would recommend pork lard,  however, as it adds to the taste as well as the flakiness of the crust.)

Similar to the design of Cantonese-style mooncakes, these Suzhou counterparts are often stamped with an edible red ink containing the name of the bakery.

While it's a bit time-intensive, making mooncakes is a perfect way to celebrate the Mid-Autumn Festival. Gather a bunch of friends around and make them together! 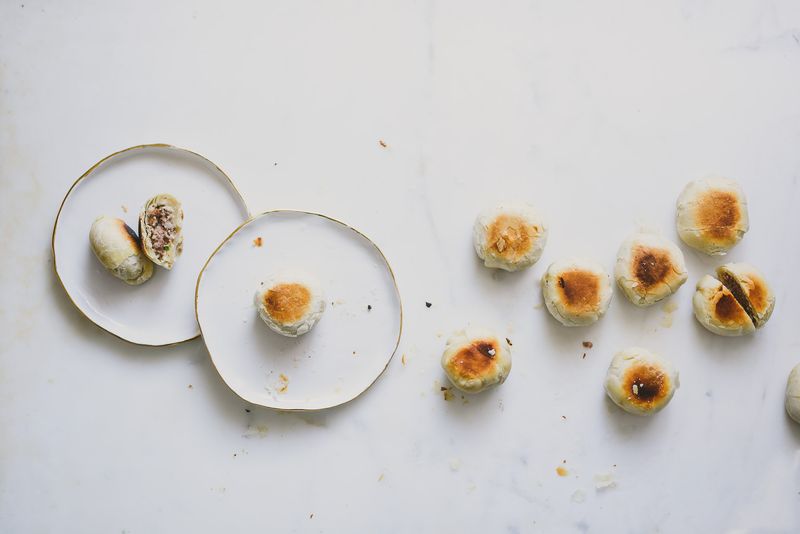 For the water dough:

For the lard dough:

For the pork filling:

For the water dough, mix all of the ingredients together and knead until very smooth. Add water or flour as needed. The dough should be soft with no lumps. Divide into 12 balls. Set on table, cover with cling wrap, and let rest for 30 minutes.

For the lard dough, mix all of the ingredients together until they form a dough. Divide into 12 balls. Cover in cling wrap and set aside 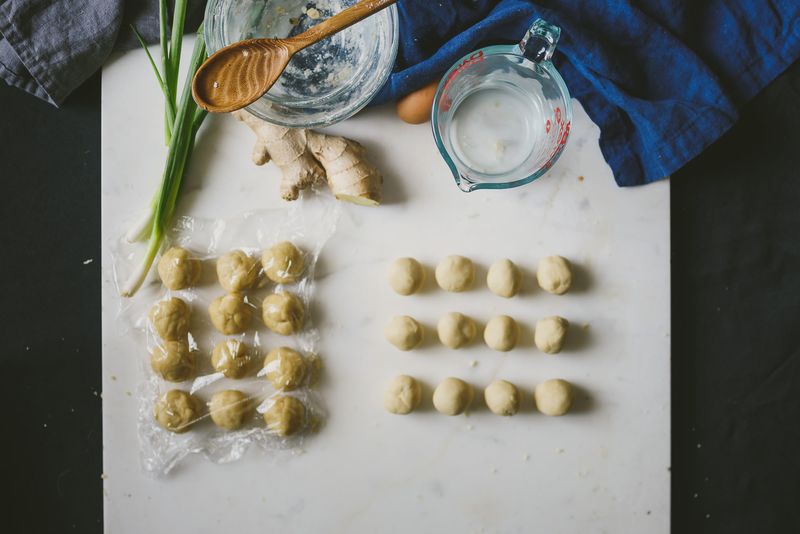 The water dough on the left; the lard dough is on the right.


The water dough is on the left and the lard dough—which has a very high fat content (160 grams flour : 100 grams lard)—is on the right. The lard dough will be much more dry, yet still oily. It’ll almost flake apart but it should hold together. 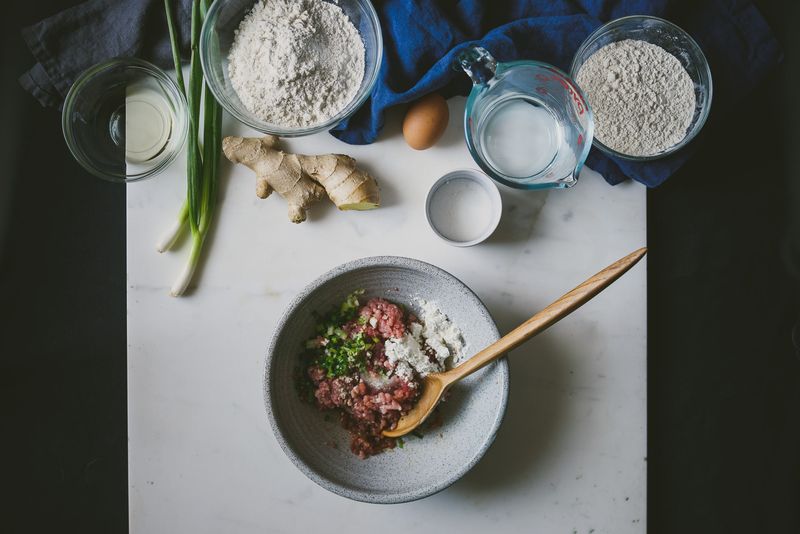 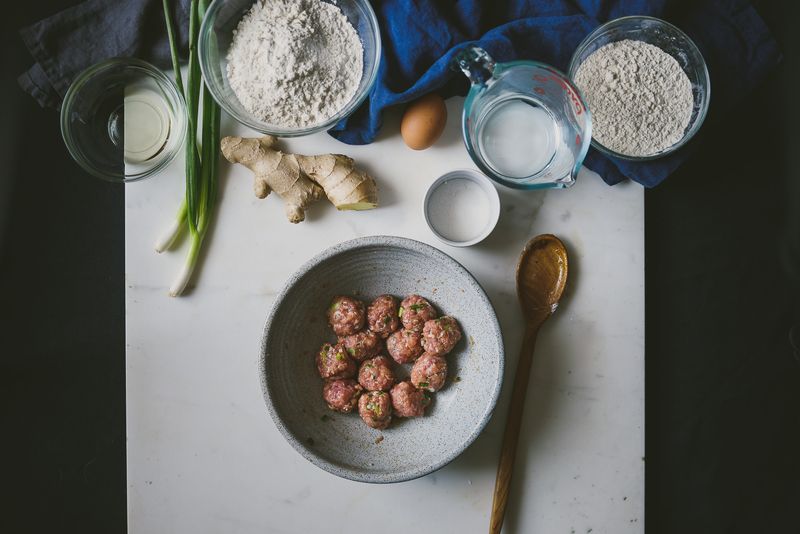 For the meat, combine all of the ingredients and divide the mixture into 12 balls. Cover lightly with cling wrap and let rest in the fridge while you work on rolling out the doughs. This allows the balls to firm up a bit, allowing for easier wrapping later. 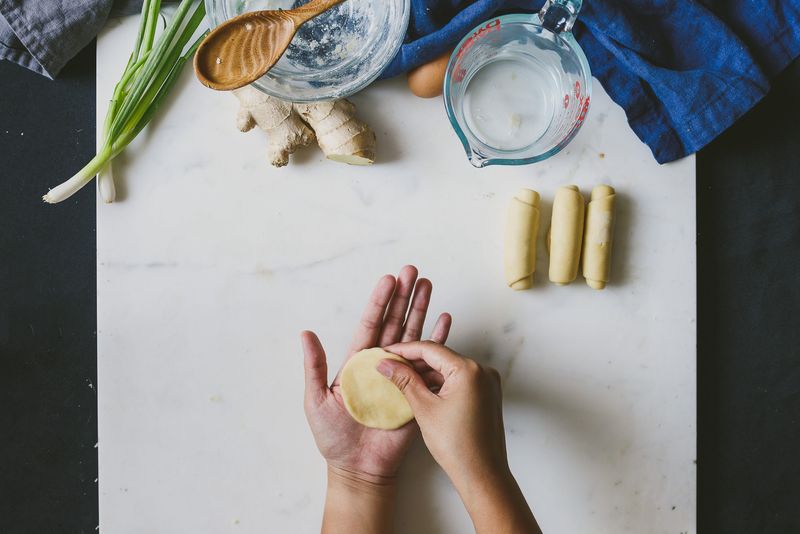 Once the water dough has rested for 30 minutes, use your palm to press a ball of the dough into a round circle. 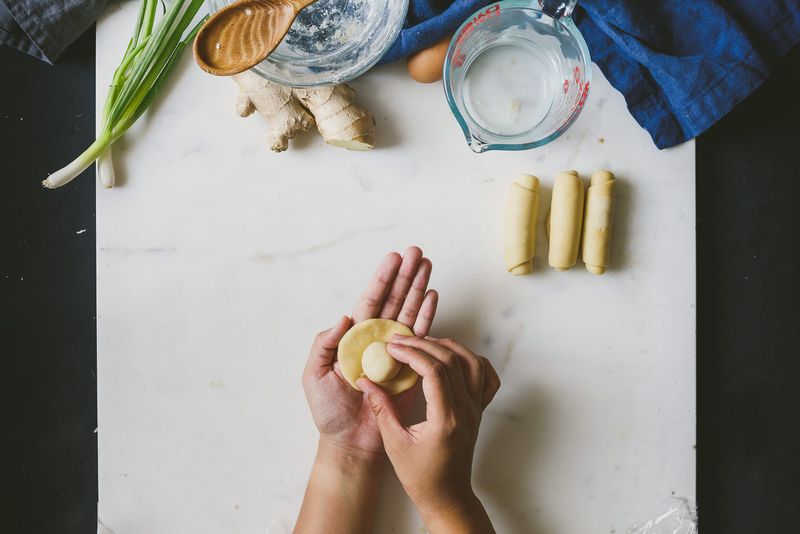 Add a ball of lard dough right into the center. Bring up the sides of the water dough and press flat. 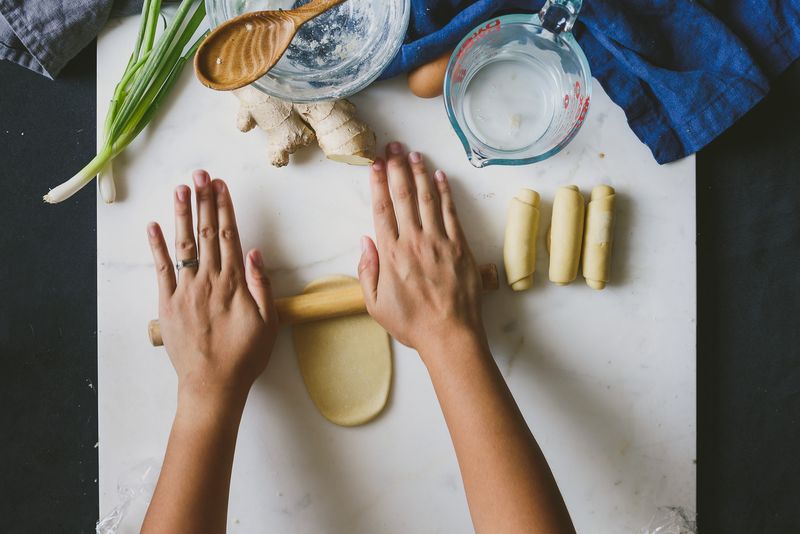 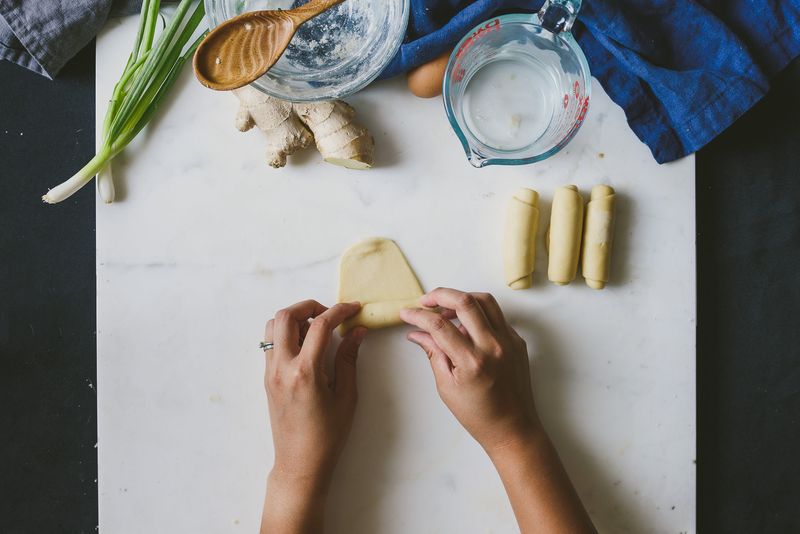 Roll the hybrid ball of dough into a long, thin oval. Then roll it into a log, widthwise. 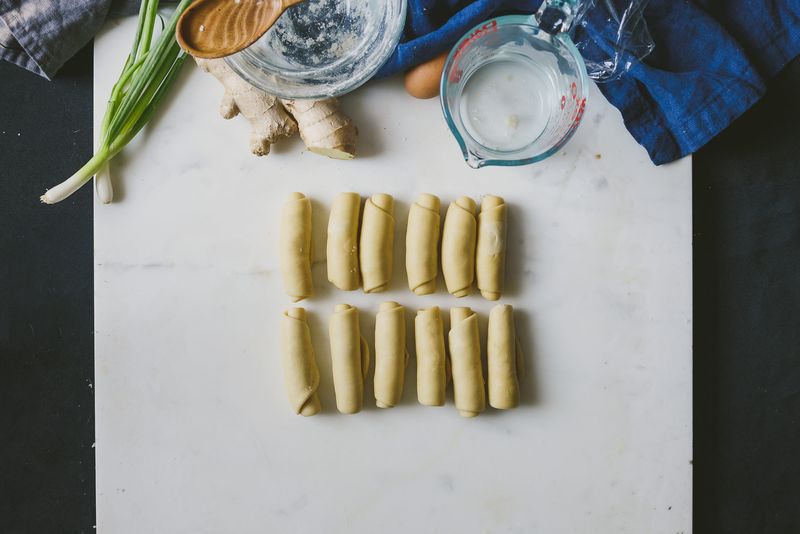 Repeat with the remaining 11 balls of dough, making sure to keep the finished logs under cling wrap to prevent drying out. Let the logs rest for 20 minutes. 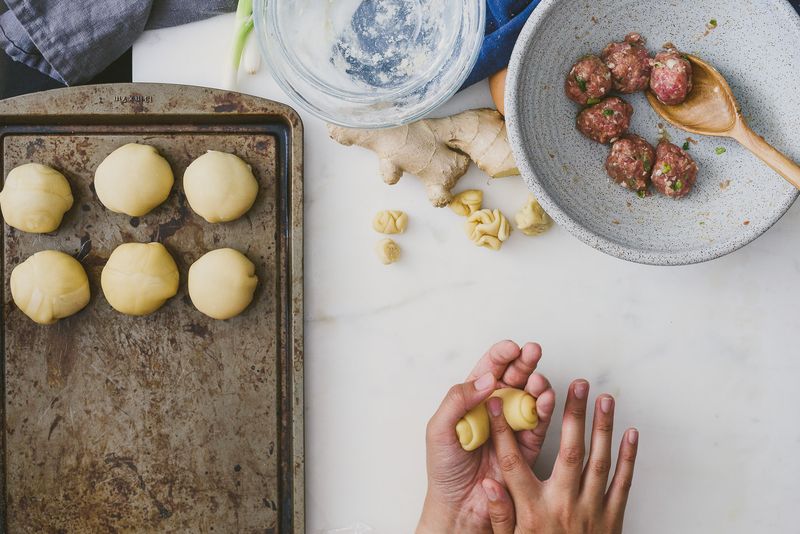 Take one log and press your finger down the middle so that the two edges bends upward. 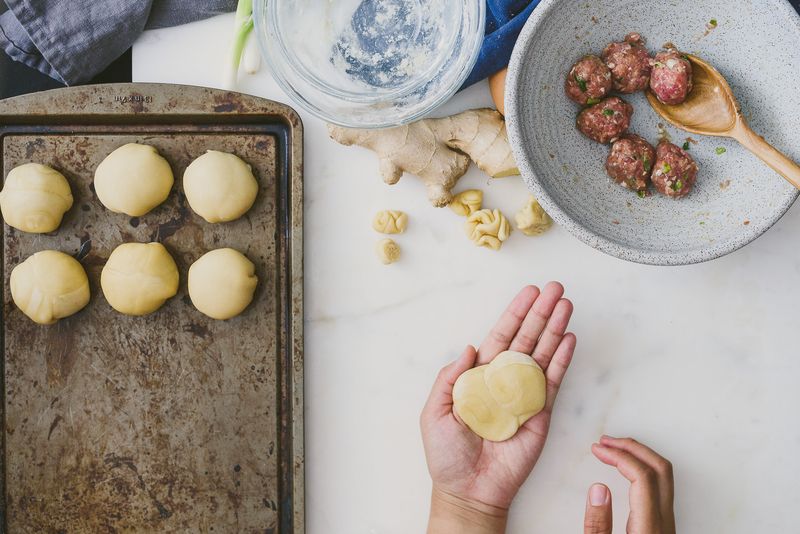 Now flatten this semicircle with your palm so that you see two spirals—the two flattened ends of the dough logs—along the surface. Use a rolling pin to roll the dough into a thin circle. 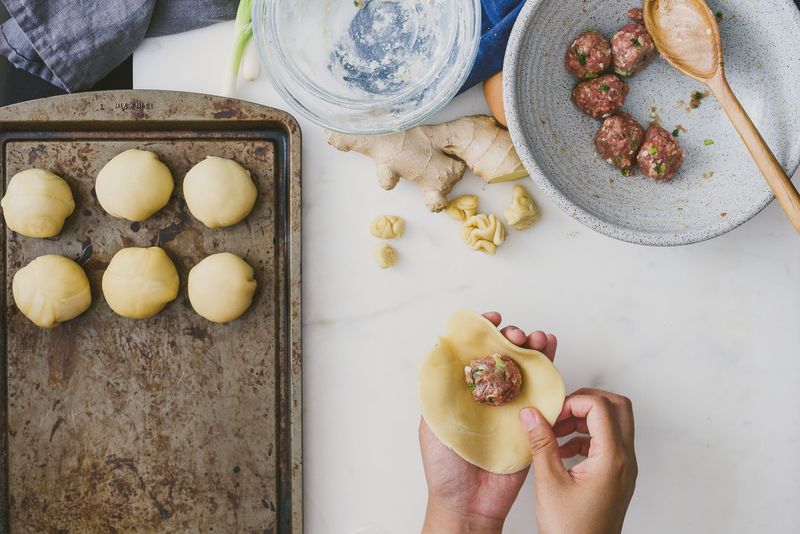 Place one of the firm balls of meat inside the circle and bring the sides of dough up. 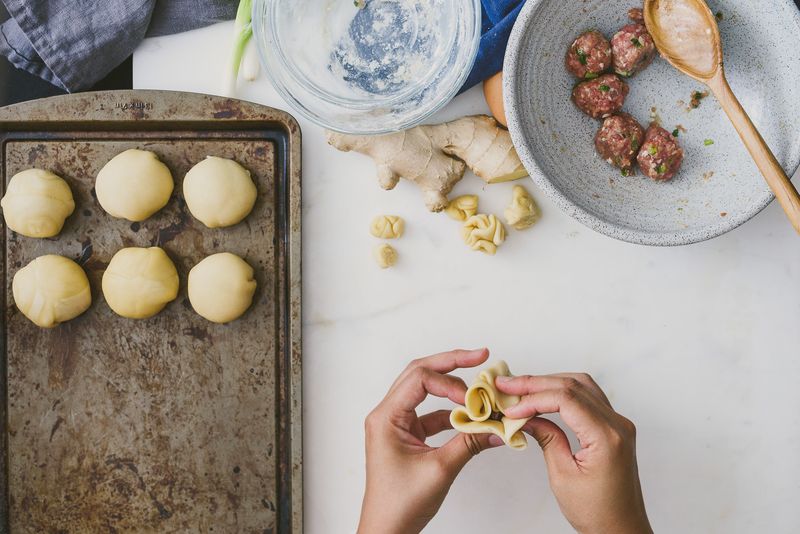 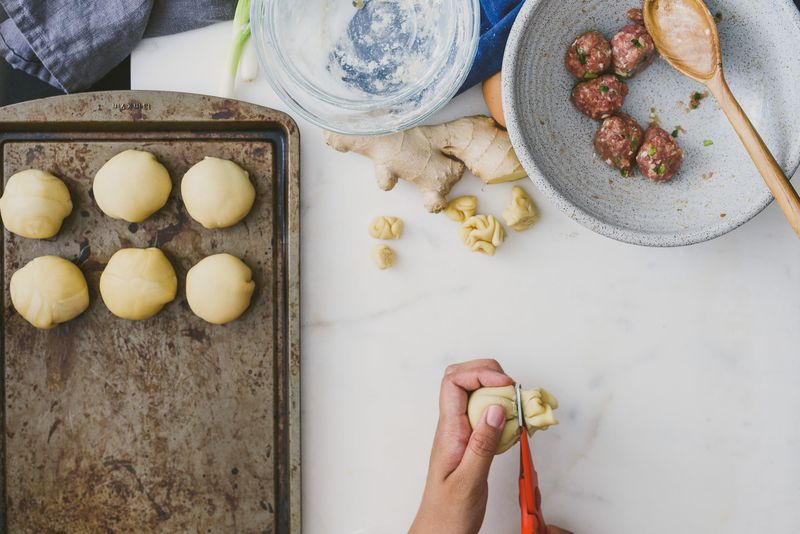 Pleat and scrunch the edges of the dough together, making sure to press tightly to seal. Use scissors to cut off any excess dough. Flip the ball over and set it aside, covering it loosely with cling wrap to prevent drying out. Repeat with all of the logs of the dough and balls of meat. 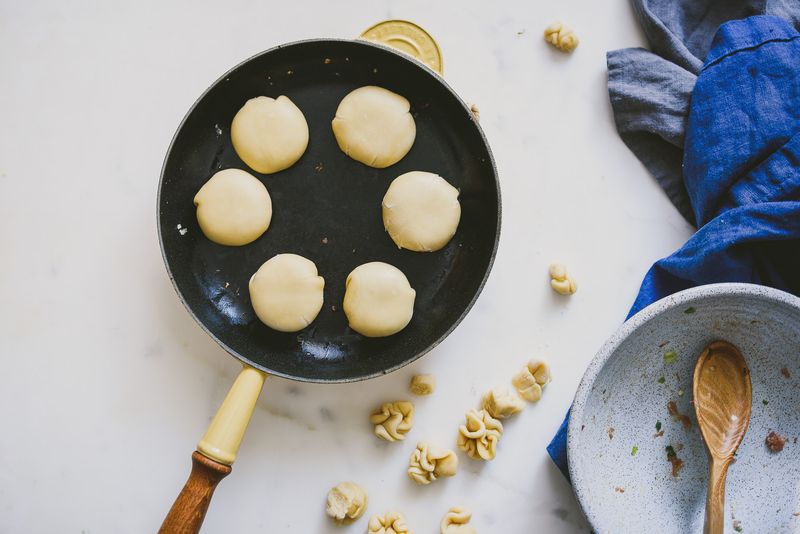 Heat a dry pan over low heat. Place the mooncake, their smooth sides up, in the pan.

Once the bottoms are nicely browned, flip and continue to fry. The outer layer will start to split. Once both sides are golden brown, remove the mooncakes from the pan and serve hot. 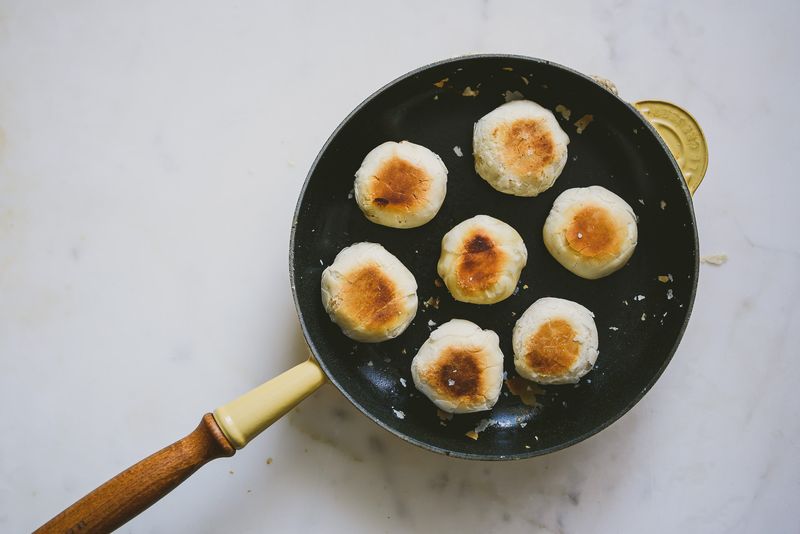 You can also bake the mooncakes: Preheat oven to 375° F, brush the mooncakes with an egg wash made from 1 egg beaten with a splash of water, and bake for 25 to 30 minutes, until golden brown. 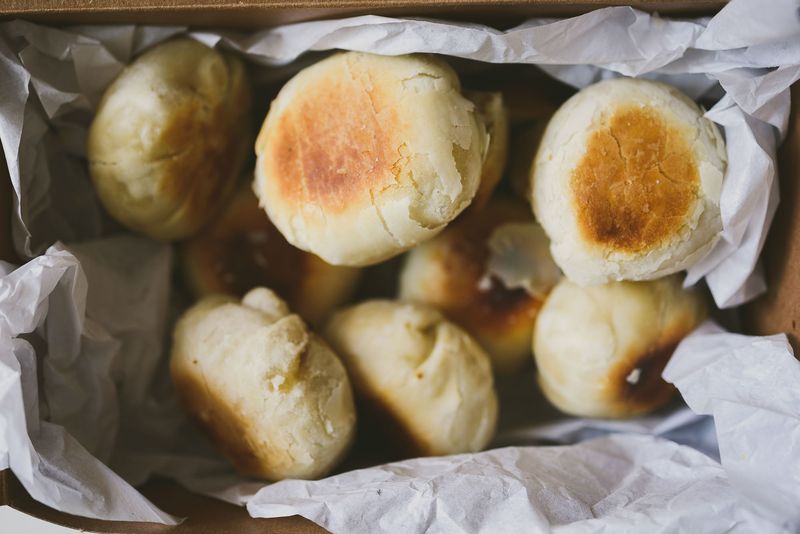 hctyum September 22, 2021
These look delicious! I can imagine serving them with a tangy vinegar or with chili oil.
My concern would be making sure the pork gets cooked through. Any reliable way of checking?

Iamtorsional December 30, 2017
Has anyone tried to assemble these and then freeze to cook later? I'm wondering if there up is a way to break up the process. Thanks!