Turn an Overload of Tomatoes into Homemade Ketchup

Can the homemade kind "ketchup" to the store-bought? 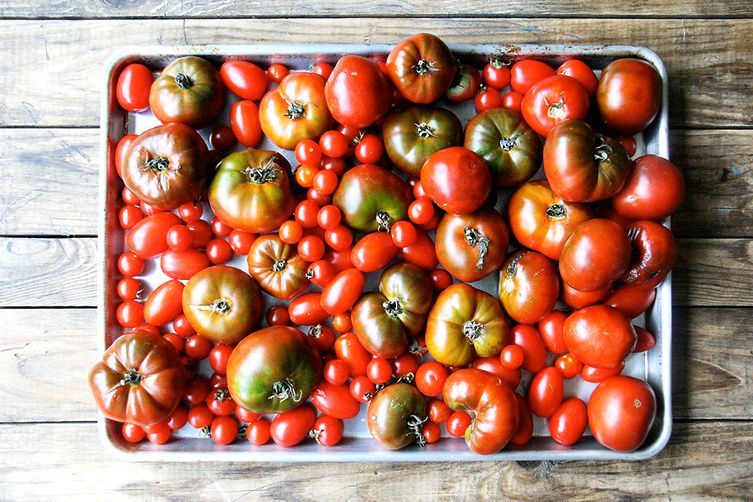 Wooed by an alluring photo, a modest ingredient list, and curiosity, I made ketchup from scratch this week. The two-hour long process required roasting, milling, reducing, and whirring—ultimately transforming four pounds of tomatoes into three cups of purée.

I served the crimson condiment aside a tray of fake frites, then watched it disappear faster than ever before. As my husband and I dunked our frites with abandon, however, our children dipped more cautiously and finally asked: “Where’s the ketchup? 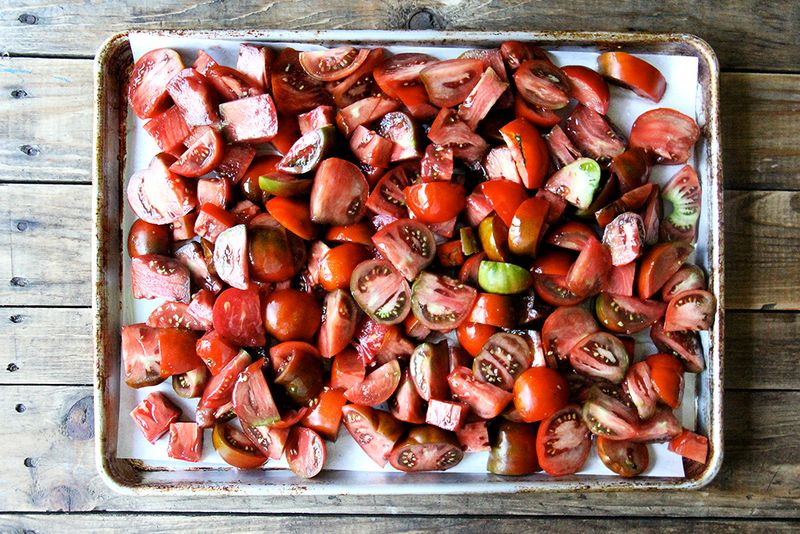 I wasn’t trying to fool them. I grabbed the bottle of Heinz from the fridge and set it on the table — my homemade version, no matter how sweet, salty and tangy, wasn’t going to cut it for the kids. As Jennifer Reese says in Make the Bread, Buy the Butter, “Heinz is ketchup.” In her experience, homemade versions, while estimable dipping sauces, just aren’t the same thing. For this reason she concludes: “Buy the ketchup.” 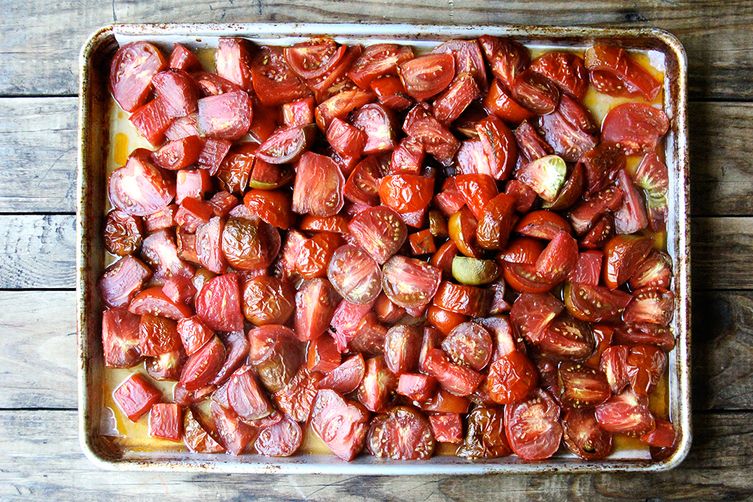 I agree with Reese in this regard: While I would proudly serve my homemade ketchup to company or package it away in slender bottles as gifts, I hadn’t made a Heinz likeness. My experiment found me asking: Was it worth it? 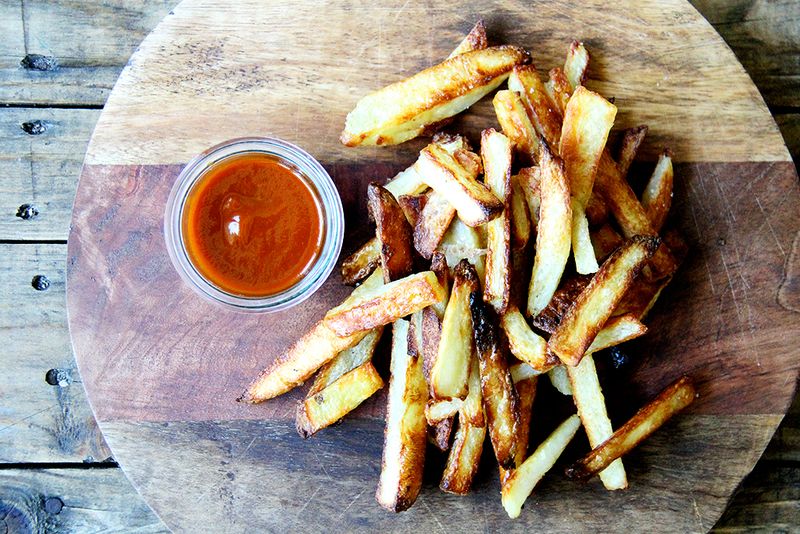 The exercise certainly wasn’t a prodigious hassle—cooking down roasted and milled tomatoes takes time but is not difficult. Plus, the process gave me an appreciation for what it takes to produce a single bottle of ketchup and it made excellent use of the many past-prime tomatoes swarmed by fruit flies lining my countertops. 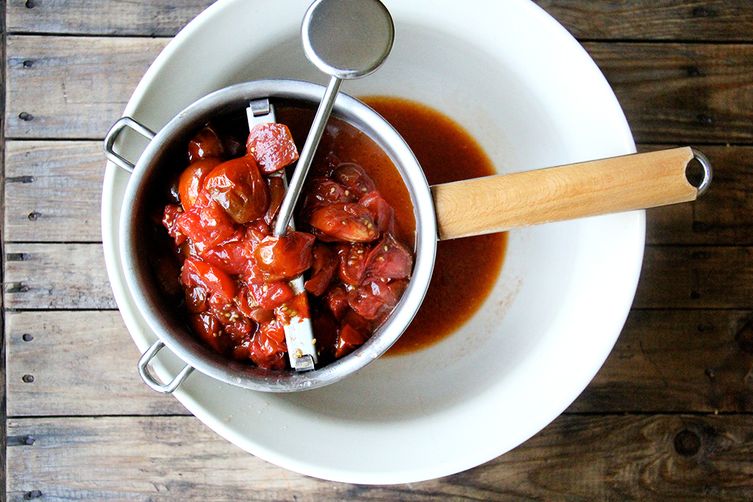 So yes, for me, making ketchup from scratch is worth it. But it may not be for everyone. If you’re still unsure if this homemade condiment is the best use of the last of the summer tomatoes, ask yourself this:

Yes to all three? Then I say go for it! Make the ketchup. 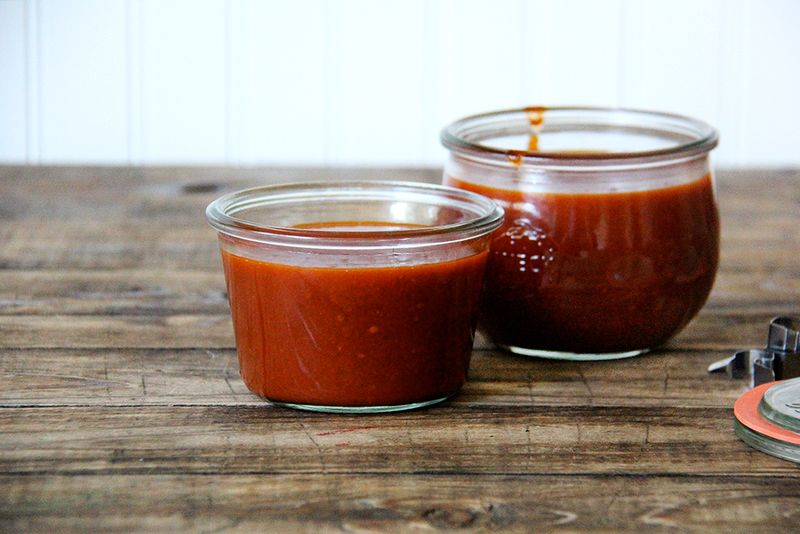 Here's what you need to know about choosing, storing, prepping, and using your late-season tomatoes:

- Choosing and storing your tomatoes:
Choose tomatoes that feel heavy for their size and that yield to the touch—they should neither be too firm nor too soft. If choosing from a home garden, Chez Panisse Vegetables suggests picking tomatoes as their color turns from orange to red and allowing the tomatoes to finish ripening indoors on a counter out of direct sunlight.

- Prepping your tomatoes:
Tomatoes can be dirty, so rinse and pat dry before using. If a recipe calls for peeled tomatoes, bring a pot of water to a boil, cut an X into the bottom of each tomato, blanch for 15 to 20 seconds, remove from water, and when they're are cool enough to handle, gently slip off their skins. If a recipe calls for seeded tomatoes, cut beefsteak tomatoes in half crosswise and plum tomatoes in half lengthwise. Squeeze each half gently, using your finger if necessary to pull out lingering seeds.

- Using your tomatoes:
There is nothing quite like the first tomato sandwich of the season or a simple summery salad. But at this time of year, as fall creeps in, the appeal of cool-weather fare begins to grow. Here are a few ideas:

From I Love New York by Daniel Humm and Will Guidara

Alexandra S. September 13, 2015
Love! I need to do this and freeze for the fall/winter. Will be so nice to have on hand.

Alexandra S. September 11, 2015
It is a lot. Are you opposed to the amount or the kind of sugar? I think you could probably cut it — I wouldn't use less than a 1/2 cup, but I think you could get good results with 1/2 cup sugar. Let me know!