We have lunch at the home of a British food stylist and writer whose kitchen is practically half greenhouse. 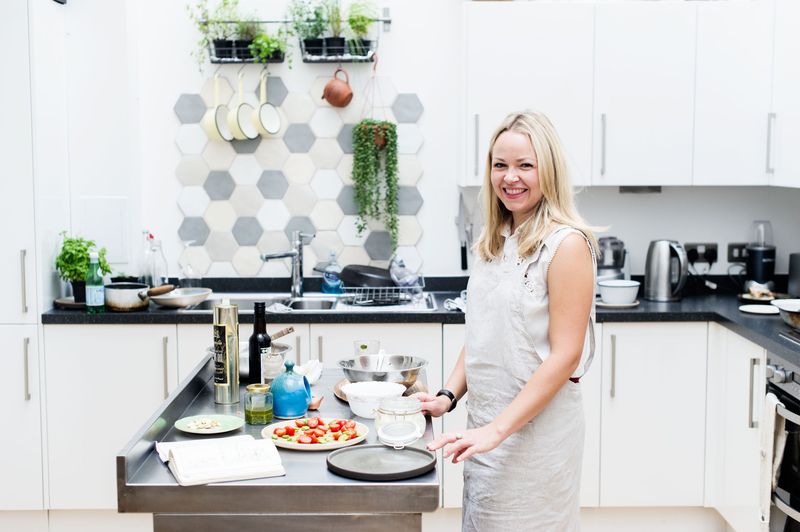 If there is one kitchen we've seen recently that’s made us want to gut our own and start from the beginning, it is Rosie Birkett’s.

The author of A Lot on Her Plate lives in Stoke Newington, an area she calls “the last remaining patch of true Hackney.” She’s only been here five months, but she knows a good thing when she sees one. “It still feels very much like a new home.” She says, “We wake up sometimes and just think ‘Really? We live here?!’ We’re so lucky to have found this place. I’m pretty sure we’ll live here for as long as we’re in London.”

Before moving to her East London home, Rosie wrote her critically acclaimed cookbook in the tiny kitchen of her previous flat. “I guess it just proves that you can make anything you like, even if you have very little space,” she tells us. 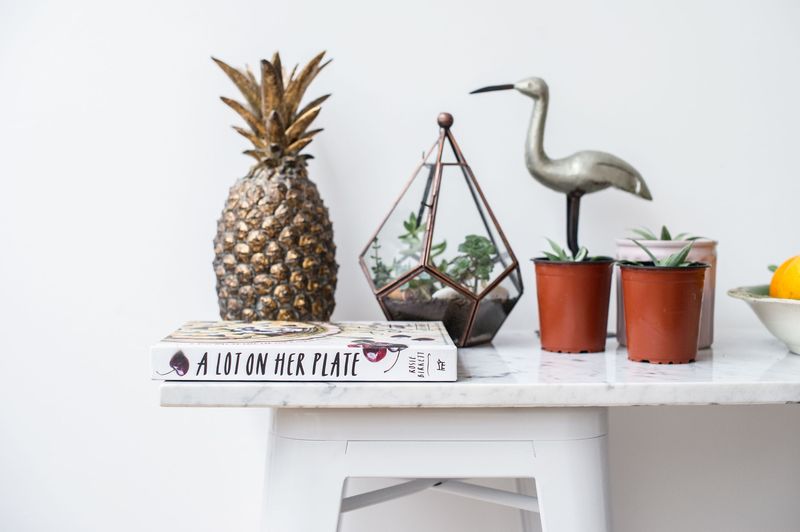 For seven years, Rosie Birkett has written about some of England’s most prolific cooks and documented some of its most beloved restaurants for The Sunday Times, The Guardian, and The Independent.

In the last year or two, however, she's started to explore the more practical side of the food industry. She has combined her knowledge of fine dining with a passion for home cooking, and her recipes now regularly appear in the pages of Olive magazine, InStyle, and The Guardian. She turned her hugely successful blog A Lot on Her Plate into a cookbook—a collection of dishes that celebrate the beauty of good ingredients and a bit of imagination. No gimmicks, no manic health tips, just vibrant and satiating food. The book hit the U.K. shelves in April with praise from Michel Roux Jr., Gizzi Erskine, and April Bloomfield.

It’s safe to say that Rosie is having a good year. 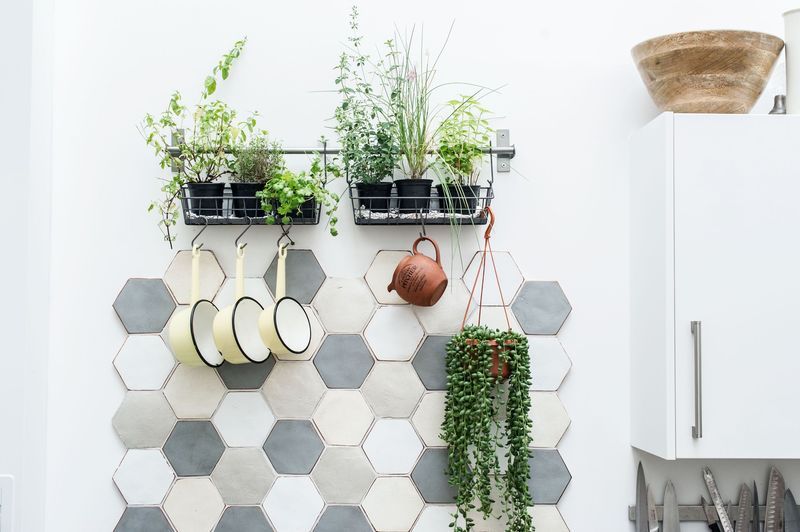 Rosie’s kitchen, the object of our green-eyed fury, is bright and airy, blooming with plants and flowers. “We basically live in a greenhouse!” Rosie tells us, “I think it’s important to have greenery if you’re living in a city without a garden.”

A skylight on the high ceiling floods the space with light. The whole room is white, colored with a collection of weird and wonderful objects from her well-traveled life. “I collect things from all over the place.” She explains, “I tend to want to keep everything. When I moved, I had to edit a lot, which was really hard. I try and just stick to things that make me feel happy.” 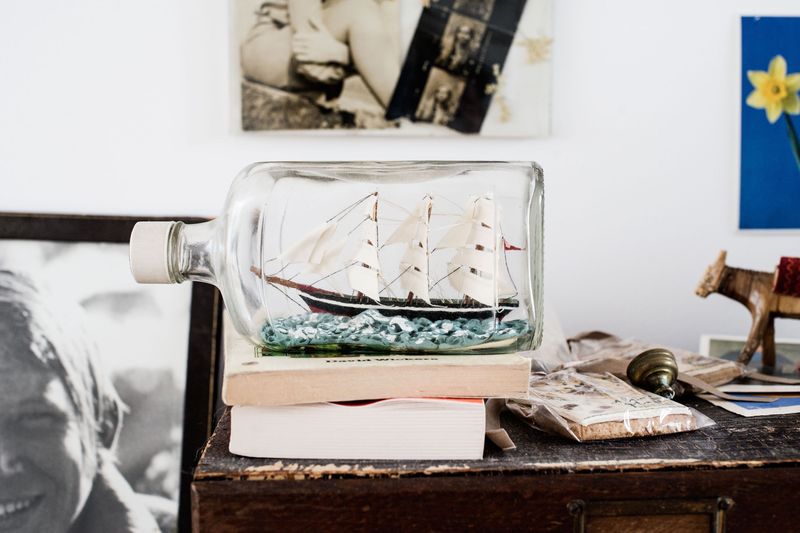 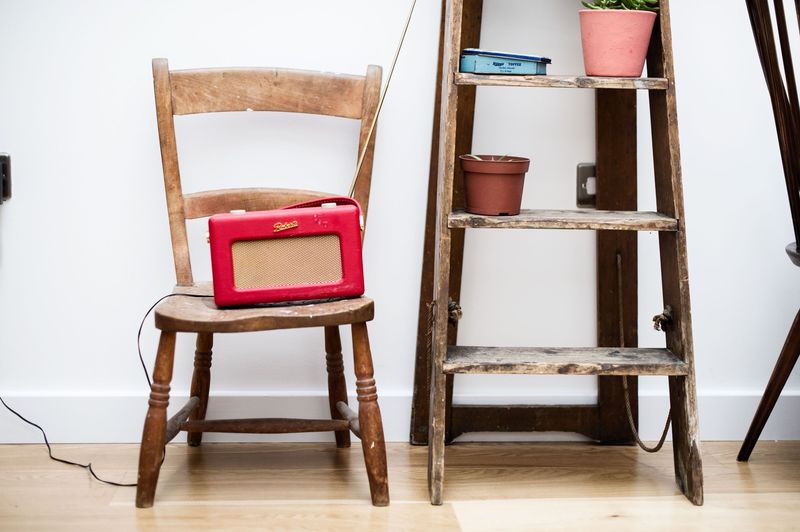 An entire day could be devoted to snooping around Rosie’s collection of things, which is exactly what we did when we popped over there for lunch. While she prepared the meal, we snooped around every corner of her kitchen-living room like hungry ferrets.

Fleetwood Mac was playing, the smell of fresh peaches and roasting pork filled the air, and Rosie’s one-year-old whippet, Cyril, slept on his favorite fluffy rug. “Cyril basically owns this flat,” Rosie laughs. “Or thinks he does.” 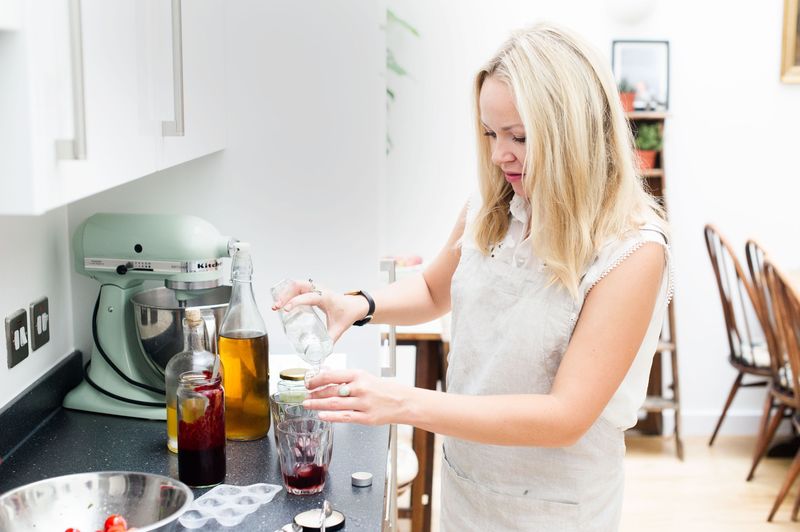 Rosie kicked off our Thursday lunch with a delicious gin, blackberry, and rose hip cocktail, garnished with yarrow foraged from the marsh. She's planning to serve the same thing when she hosts an upcoming local supper club inspired by the marshland near her house. “I wouldn’t call myself a ‘forager,’ but I live in the middle of a nature reserve and I go out with the dog three times a day, so I’m learning what grows here,” she says. “There’s wild food everywhere! There are sloe, blackberries, pineapple weeds, meadowsweet, plums, pears, and rose hips.” All this in East London? We were surprised, too.

Rosie’s food styling talents weren’t hard to spot at lunch. The table was lavished with color, from the bowl filled with shells of cobnuts (a type of hazelnut) to the glass bottle filled with water and fresh basil.

The food only added to this little spectacle. Rosie prepared a salad of homemade ricotta, tomatoes, and broad beans with creamy cobnuts and salsa verde. With this, we ate roasted pork belly with a zesty peach panzanella that perfectly offset the richness of the meat. You can find the secret to perfect pork crackling in her book. Spoiler alert: It involves bicarbonate of soda. 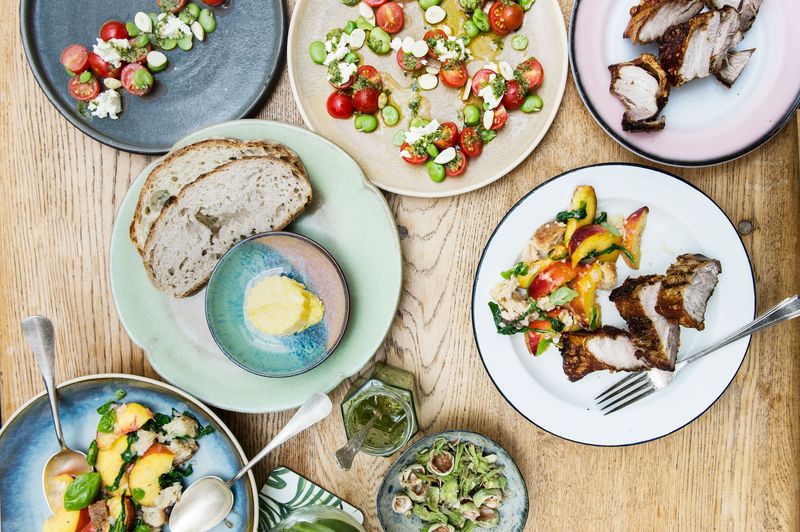 As we emptied the last bits onto our plates, Rosie explained how her days revolve around the kitchen. “I’m here most days testing recipes and being generally obsessed with cooking.” She says, “I just love this space, I can’t believe my luck that I’ve got this much room to move!”

Her food cries out to be shared with loved ones, something she is doing more than ever. “I have people for dinner a lot. This space is so conducive to hosting, so we use it!” 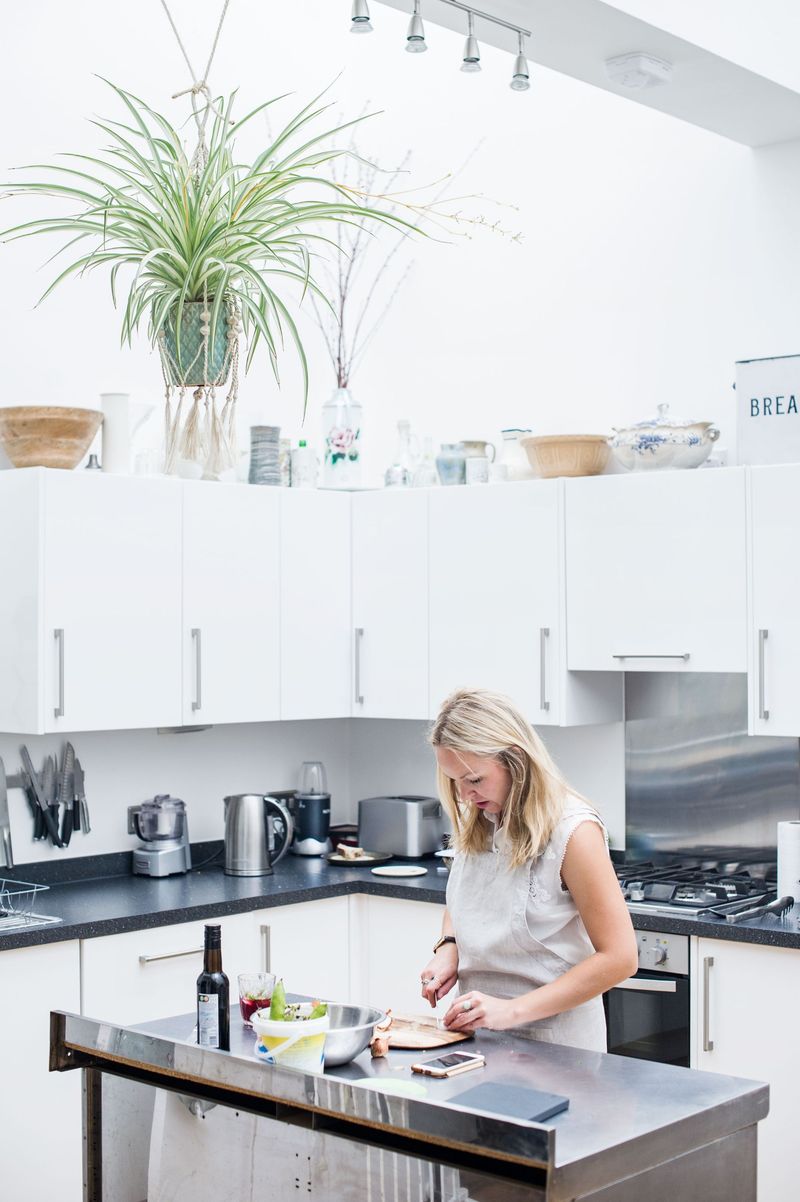 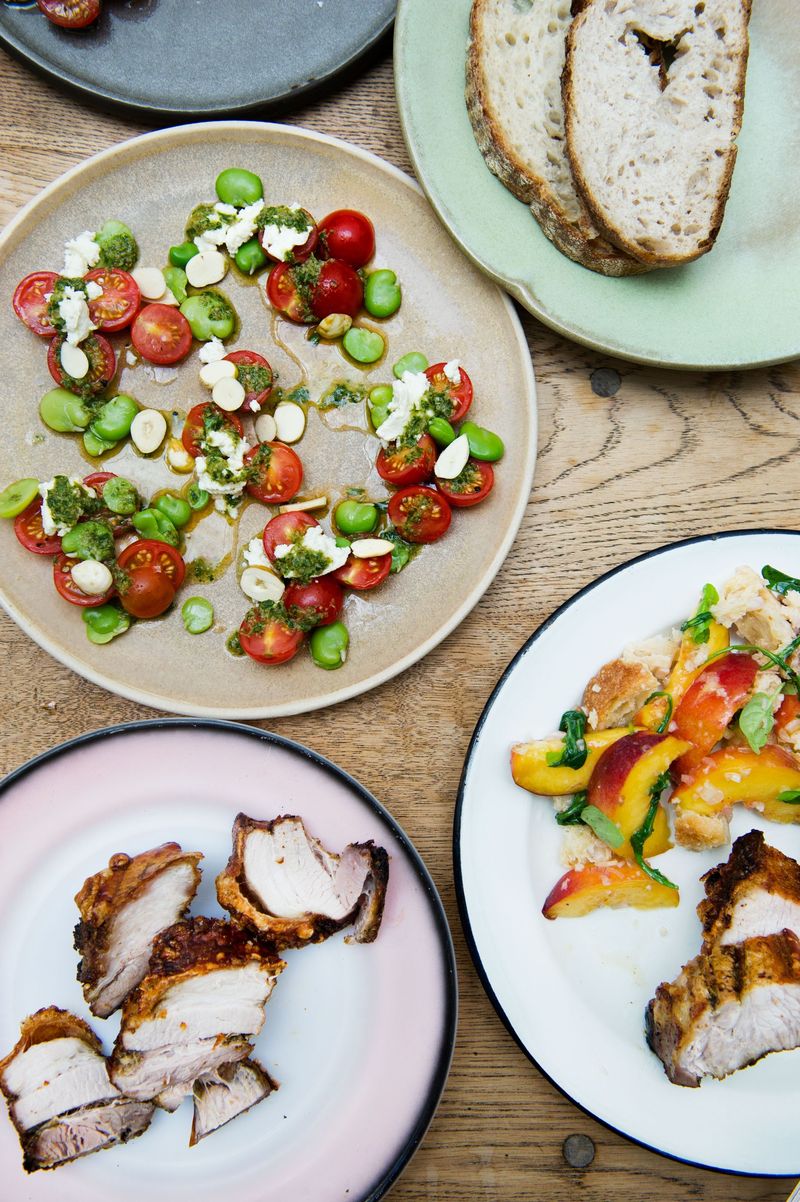 It’s easy to see why London’s eyes are on Rosie at the moment. Her food is full of love, the kind of recipes that make you want to fill the table for long dinners with old friends and lots of wine.

After the peaches and pork, Rosie scooped fig leaf and blackberry ripple ice cream into our bowls, made using her trusty Cuisinart ice cream machine. Conversation turned from the reclaimed steel island that has “transformed” her kitchen to the best place to get pork buns in Chinatown to her recent trip to Greece’s Ionian Islands.

We stayed for a bit too long and ate a bit too much, but after all, that is the essence of Rosie Birkett’s cooking: conversation, comforting food, and good company. 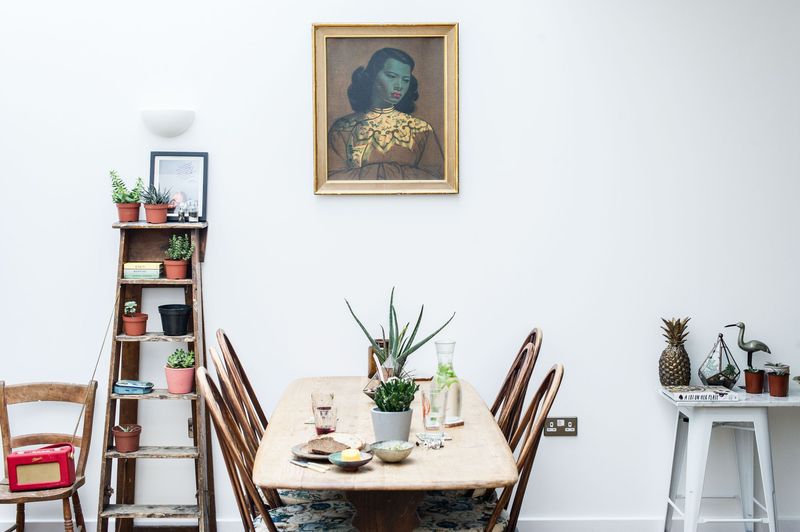 For the peach panzanella:

And find the recipes for Tomatoes with Ricotta, Hazelnuts, and Salsa Verde and Foraged Fig Leaf and Blackberry Ripple Ice Cream.

Johanna T. September 19, 2015
The food looks absolutely yummy . For your information Stoke Newington is in North London , not the East End .