Every Monday, Jennifer Steinhauer writes about her adventures in weeknight cooking (and we all look forward to her particular blend of rants, cooking tips and confessions as the best Monday morning salve since the double latte). We thought it was high time we featured her in a Cook Spotlight -- read on below, where we've quizzed her on her comfort foods, kitchen disasters and her worst dinner guest ever.

If you could have a dinner party for 6 and invite anyone in the world, who would be at the table, and what would you talk about? (and what would you serve?)
This is the sort of question that people are supposed to answer with an expression of earnest desires to exhume Winston Churchill or Emily Dickinson and quiz them about their views on the debt ceiling or the impending threat of Yemen. Honestly I have been living away from NY for so long now that I would like to gather my best friends in the city and get together over huge platters of Moroccan food, served family style, finished with a divine chocolate cake. We would talk about current events, the problem with modern dishwashers, and maybe John Mayer.

Do you have any holiday or dinner party traditions?
For dinner parties I often have a question that we go around the table and answer, like what was the worst job you ever had. Holidays have been a mixed bag over the years because we have lived in three cities over the last six years, and so it is hard to maintain anything. I do really like to host Thanksgiving. It is very important to me to make my husband's grandmother's corn bread stuffing, and a new recipe each year as well.

What do you expect of guests? Gifts, entertaining conversation, what?
I dislike when people who won't at least try dessert, because it just makes everyone else feel all the more self-conscious about their sweet eating, and is rude to he or she who baked. This tends to only be a problem in Los Angeles.  I really don't expect a gift and would rather guests feel like they can come empty handed and just be fine with that, though of course I can't bring myself to do that. I do believe you should pay attention to people on both sides of you at the table.

Worst guest ever?
The guy who arrived late for dinner and left before dessert for another party.

What's your husband's favorite dish?
My chili (on the site: Just Good Chili)

How did you get into cooking?
It was pretty traditional actually: after I got married I started to try and cook more; once I met Amanda she taught me how to do it properly. Well, she tried. I still don't garnish. (My husband just read this and said, "Actually you latched on to Amanda like a barnacle and made her teach you." That's true. We had many many Sunday dinners together between 1998 and 2006.)

Describe your most spectacular kitchen disaster(s).
Good grief I've had so many. Soup all over the ceiling from a mishap with an immersion blender; the time during my wedding week when I thought two lasagnas and two flats of chicken would somehow all cook evenly in a Manhattan apartment oven at once; I could go on and on. But among the worst, which I wrote about in my blog, was recent, when I set the cord of my food processor on fire and nearly chopped my finger off all for one meal.

You've been writing for your entire career, and yet you've come late to food. What held you back? What's next?
You know, I have never been a food writer, and I do not consider myself one now. I have always written about a lot of topics and at some point I think I saw a food story I wanted to write and just did it. To me it is just one of many topics that interests me, though probably more than others in recent years.

Tell us what your first kitchen looked like.
I assume you mean my first adult kitchen. It was in a split level apartment I shared with two other college girls in Manhattan. It had the typical small gas stove. My most challenging was on the Upper East Side, which had a bathtub upon which I placed a large piece of plexiglass to use as a dish drying rack/cutting board when not bathing.

Who is your culinary hero?
Nora Ephron.

Is there a dish that you are known for among friends and family?
My flourless chocolate cake. I have made it found countless holidays, dinner parties and children's events. My kids ask for it every time.

What do you listen to (if anything) while you're in the kitchen?
Country music, usually on Jango.

What is the kitchen activity that's most cathartic for you? Least cathartic?
I love cleaning as I go. It makes me feel calm. I hate being faced with a giant pile of dishes. One Thanksgiving, at midnight after my 12 guests left, I started crying. (Husband again: "You are the least clean-as-you-go person I ever met. You do pile things in the sink. Cooking for you is like taking a nice bath, and when you get out there is a big ring around the tub.") Okay. I will go with reading the recipe. 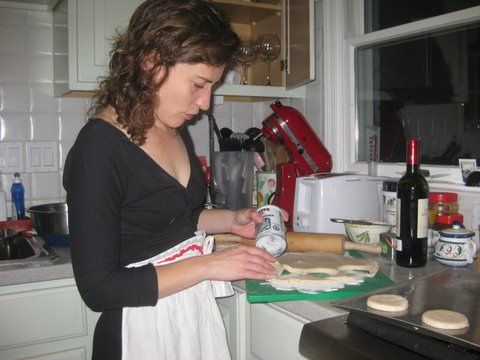 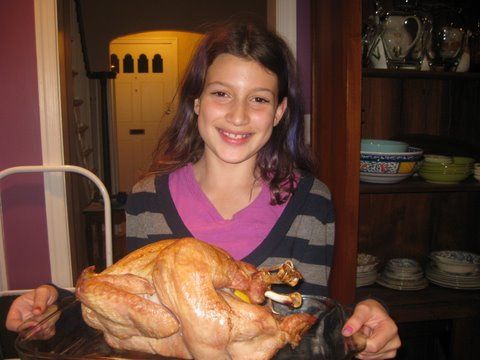 Is there an ingredient you're really into right now?
I can't seem to stop using anchovies.

What is your idea of comfort food?
Jelly Bellies, which I shovel in my mouth in my car when I am upset. Carrot cake. Pasta with a ton of cheese.

What's your least favorite food?
Tripe. I have never learned to accept it.

What are some of your favorite recipes from the Jenny's in the Kitchen column?
I have actually cooked all of my Jenny recipes more than once after I've blogged about them, but my favorites include a white fish recipe cooked in wine which is very elegant, and the two written by my colleague and fellow food52er, fisheri, who learned to cook in Italy and is very very talented. They work every time. (Ed. note: Those would be Puglia Lady's Pasta and Down and Dirty Pasta e Cecci)

How did the Jenny's in the Kitchen column come about?
One day I called Amanda from my car, which is where most of our conversations took place when I lived in Los Angeles, and said I thought the site, which was getting increasingly sophisticated and full of amazing recipe writers, might benefit from a weeknight cooking blog for those who don't have the time or skill for the more complex recipes. She said great idea but I don't have the staff. I said I'm your staff! I wasn't sure how or if it would work, but Amanda and Merrill gave me a lot of latitude to just riff. I do let them know what I am making in advance, to make sure it does not conflict with an upcoming contest, or that it is not a recipe they have tried and dislike.

Sometimes we have disagreements -- Amanda accuses me of gravitating to too many Moroccan dishes and recently prevented me from writing about a dish simply because it failed to mention what type of meat is used and featured inexact measurements that likely would have failed, but I just harrumphed and moved on. I am tremendously grateful for this opportunity to write about food here each week, and to get the chance to unearth some great recipes that may have been lost in the mix. It has been tremendous fun to read the comments each week from the great recipe writers on the site, which has been the most surprising and wonderful outcome of the blog.

Jestei December 13, 2010
These comments are so incredible. I confess I feel a bit abashed -- there are so many fantastic cooks on this site and I am a mere week night pretender -- but I truly feel over the last year that I have made a whole new circle of wonderful, thoughtful, big-hearted, food loving friends and I cherish all of you so much. I love reading all of your recipes and bios -- I cook all of you all of the time. So glad you like the recipes I grab -- I have made every one at least once and many have become my regulars, and I hope they've become that for you too.
xx oo "jenny"

TiggyBee December 13, 2010
This is why I Love this site!! xox... This is one great community of people. I heart A & M for creating this place.

mariaraynal December 11, 2010
Jenny, I love your blog in so many ways: the terrific writing, the exposure it gives to previously unsung food52 recipes, and the unvarnished reality of the weeknight, working family kitchen. It's great to get a glimpse into your life and see your lovely family. I'll bet those NYC Sunday dinners were the best....

wanderash December 9, 2010
Great spotlight! I love your column and you writing! Thank you for giving me even more reasons to be obsessed with Food52! (I just read Mr. Latte and was wondering if the Jenny in the book was you-- and now it is confirmed.)

Waverly December 9, 2010
You are fun, Jenny. I love reading your posts!

mcs3000 December 8, 2010
I am tremendously grateful for your writing, having followed it from NY, to LA, to DC. I especially love your food52 blog because I get great recipes from it and you make me laugh. Thank you, Jenny, for inviting us into your kitchen. Your family is beautiful.

Sagegreen December 7, 2010
What a wonderful profile. Thanks for allowing us take more of a glimpse into your family life! Your writing is always such an inspiration, especially for starting off the new work week!

healthierkitchen December 7, 2010
Thanks for your always honest and funny posts. I wake up very early weekdays and I'm always waiting on Monday mornings for your blog to update!

ErinH December 7, 2010
I love your column, Jenny, and always look forward to it. You have also introduced me to chicken paprikash, for which I will be forever grateful.

MyCommunalTable December 7, 2010
Monday is a great day to read a well written blog. Keep it coming.

luvcookbooks December 7, 2010
now that you mention that nora ephron is your fave food writer, i see the resemblance in your writing. very funny, clean (in the sense of elegant/no words wasted), and with a deeply thoughtful edge. she must be very proud of you.

lapadia December 7, 2010
WOW! Ditto, Ditto, Ditto, to what was already said. Thanks so much for “shining” on Food52 every Monday; you truly live life as an explanation and inspire me to do so! Great Q&A…oh, PS – love the flourless chocolate cake.

monkeymom December 7, 2010
I love your writing. :) Thanks for mining the site for treasures!

lastnightsdinner December 6, 2010
I agree that your weekly posts here have been such a wonderful addition to the site - so nice to read this feature!

MrsWheelbarrow December 6, 2010
Wonderful Spotlight, thank you so much for letting us into your kitchen & life every week.

dymnyno December 6, 2010
I like your sarcastic wit and your sense of humor.

TiggyBee December 6, 2010
loves me some Monday mornings with Jenny!!

Midge December 6, 2010
Your columns definitely make Monday mornings chirpier! Thanks so much for spotlighting great recipes that I always seem to have missed and for never failing to crack me up.

mrslarkin December 6, 2010
Definitely one of the most anticipated Cook's Spotlights! Jenny, so nice getting to know you better. You make our Mondays shiny and happy. Now if we can only do something about Tuesdays...

Lizthechef December 6, 2010
I love reading your blog, especially when it makes me laugh out loud...Thanks for the peek into your life with family and friends.