Down and Dirty Pasta e Ceci

Today, we're re-running one of our favorite old Jenny columns while she works on finishing her new book, with a new photo to boot! 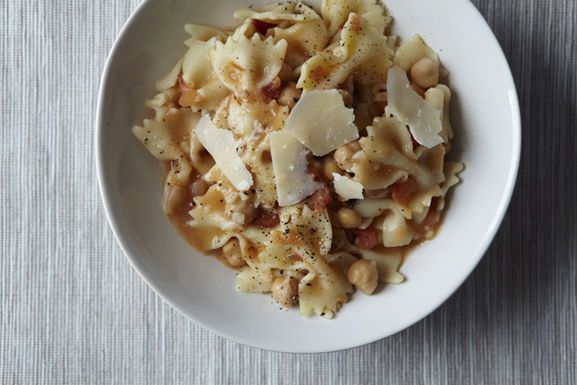 Let’s start by rejecting, at least in part, the central tenets of weeknight cooking that have been drilled into our collective heads since the day we unwrapped our first Calphalon pan. (I never liked that pan, by the way; it was too heavy and such a pain to wash that cleaning it once involved a bruise, but I was told that married people own Calphalon. You see? Rules can lead to undue harm!)

Weeknight recipes, we have been told, must be extremely easy, produce results in less than 30 minutes and generally speaking be free of garnishes. There is logic there –- a Tuesday night is no time for most working people to reduce a sauce, and children, should they be part of your table, do not react favorably to the words “just another hour” with regard to a roast. True enough, ingredients and pots should be kept to a minimum.

But to me, the best dishes for mid-week are those with which you have become mildly obsessed, and through that obsession have mastered over time, or at least learned to make without squinting at the recipe 20 times.

They are dishes for which opening a can when something is out of season will not cause substantial ruin, and that with an extra this or that can be fancied up when some unexpected guest arrives pretending to be surprised that it is the dinner hour.

The latest addition to my list is fisheri’s Down and Dirty Pasta e Ceci. In the spirit of full disclosure I confess that I first looked at this recipe because fisheri is a colleague and friend. While I knew him for years as a take-out burrito guy, he had spent some part of the last decade living in Rome, where he learned to cook, and frankly I wanted to see what he had.

Let me say that English is fisheri’s first language, even though his recipes can sometimes sound translated. When he calls for “half a packet” of pasta, he means half a pound. He has been known to list a “glass of wine” in others, an arbitrary measure if there ever was one, its size linked to what sort of day one has had, and whether or not it contained an encounter with Time Warner cable.

But this recipe is a winner, and perfect for a weeknight dinner. Most importantly, it contains ingredients that should almost certainly already be in your larder. One exception may be high-quality anchovies, but that is an omission you should have corrected months ago anyway. Next in importance is its relative ease.

What we are talking about here is pasta and chickpeas cooked in a small amount of liquid, seasoned with rosemary and anchovies, all melted together into a sea of hearty, slightly salty goodness. Thrown into the mix, but in no way intruding on your chickpeas and anchovies -- the Fred and Ginger of this dish -- are some chopped up tomatoes.

As you will see in reading the recipe, you are basically pouring and stirring. Chopping is limited to the tomatoes, anchovies, which put up no resistance, and some garlic, which is better than onions on any night.

Like everything, it benefits from the freshest ingredients you can find, and the best cheese. But I once longed for it on a December evening at 7:00 P.M., and so canned tomatoes had to do. Yeah, my rosemary was from Von’s, its lack of freshness made all the more bitter by the fact that it took me 25 seconds to procure it, but then 20 minutes to pay for it, which I thought defeated the whole point of a 15-items-or-less aisle, and plus I was really hungry, but I digress.

The result of that particular effort was a more tomato-y sauce (I probably should have drained them) so I reduced my stock to adjust. Sometimes I think it needs a kick, so red pepper flakes are added. Sometimes I feel the world is against me, so I shave on a lot more cheese.

Like every recipe that becomes part of the weeknight rotation, some nights it turns out better than others, but the more often I make it, the less I have to think about it, the more I am able to email mid-flame. If I want it any easier than that, I’ve got pumpkin tortellini in the freezer.

Down and Dirty Pasta e Ceci

See the full recipe (and save and print it) here.
Photo by Joey De Leo

Hilarybee January 7, 2013
Very similar to my family's recipe, but I usually puree half of the ceci and add it to the broth mixture while the pasta is cooking. Adds extra thickness.

Christina @. January 7, 2013
I hope you don't mind me letting you know that garbanzo beans are spelled "ceci" in Italian; adding the extra "c" changes the pronunciation too. Pasta and beans are one of my family's favorite meals, especially in winter, here's a super simple version: http://christinascucina.blogspot.com/2012/03/pasta-e-fagioli-aka-pasta-and-beans.html

Kristen M. January 7, 2013
Thanks for mentioning, ccincalif -- we just updated the post and recipe.

Jestei February 1, 2010
so glad you liked it. i do find i usually crave the crushed red pepper addition.

rosarylesco January 13, 2010
Made this dish the same day I saw the recipe. If anyone is not cooking it because of the anchovies, please don't be scared of this flavor. In this recipes it is just background that adds depth and complexity to the dish. A wonderful find!

MrsWheelbarrow January 12, 2010
I enjoyed this so much! Thank you for all the warmth and charm you bring to simple out-of-the-pantry fare. I can't wait to have some dirty pasta.

lacerise January 12, 2010
will be trying this dish this week and i'm excited. i love the combo of garlic, anchovies, ceci, parmigiano, pasta. look forward to more of your posts!

lacerise January 12, 2010
boquerones are white, very good spanish anchovies. in northern california, we can get them in bulk at most upscale food stores. i used to use these in every dish that called for anchovies, even at a cost of almost $30/lb. then i switched to salted anchovies (which, like salted capers, i'm told are superior to those in brine or oil). now i'm going for the filets in a jar and it's a whole lot less work....and i haven't been able to discern a difference in the dishes i've prepared. and now i have more disposable income for the next culinary craze.

AntoniaJames January 12, 2010
Thanks! This is so helpful.

BonEllen January 12, 2010
Have you (or anyone) tried variations with oil-packed ventresca or sardines or other fish?

Rhonda35 January 12, 2010
As always, Jen, fantastic writing and humor! Having this for dinner tonight - planned to have it last night, but got behind schedule - fed tacos to the kids and I had popcorn at the movies. (She says as she skulks away in deep embarrassment!)

Kelsey B. January 11, 2010
I completely agree re getting over the idea of formulaic solutions for weeknight cooking - there is very little substance or inspiration there! Great advice on creating your own go-to dishes - whether quick solutions or make-ahead. I certainly open cans from the pantry from time to time - there is nothing wrong with that. Great column!

rpenovich January 11, 2010
Okay Jen--you had me at how much you hated your Calphalon and the incident involved a bruise! I'm going to love this dish--pasta-food of the gods--and love your new column. Thanks Food 52 for being excellent!
Author Comment

Jestei January 11, 2010
Thank you ALL so much for your great comments, questions etc! I am SO feeling the food52 love! I hope you all truly enjoy this dish and I look forward to seeing you all back here next week! Jenny, in her kitchen.

CatherineTornow January 11, 2010
Welcome to the team! If this entry is a sign of things to come, I'm excited.

rachelzell January 11, 2010
yeah! love how i understood the whole dish before ever coming to the details part, that's how i like recipes, described. i like to figure the amounts and stuff out on my own and can't be bothered to squint at a card 6 times anyways, can't wait to read more!

elltea January 11, 2010
I am really looking forward to your future columns! Your voice reminds me of Laurie Colwin's, updated to include eyerolls at Time Warner cable. I also can't wait to try this pasta dish. Thank you!

Chef G. January 11, 2010
Great new column! How can you not love a gal who uses the word "larder?" Welcome Jen... Look forward to diving into your weeknight treats.

AntoniaJames January 11, 2010
I'm always on the lookout for good puttanesca-style suppers, i.e., ones that can be made just from items dug out of your pantry; it's even better if, like this one, they don't require any manual labor or real thought. Great intro, too. Thanks!

liamoran January 11, 2010
Where can I find good quality anchovies? My grocery store has them, but I don't know how good they are. I was thinking along the lines of Whole Foods. Does anyone have any brand they prefer?

Jestei January 11, 2010
The last time I was at WF (in LA) I did see nice anchovies in the cheese section. I got a jar of Medusa brand at Surfas, a restaurant supply/specialty foods store here. Make sure your fish friends stay fully submerged in oil & they're good for a long long time!

AntoniaJames January 11, 2010
This is great to know! I never thought of anchovies as being something for which there could be a lot of variety . . . I suspect that the oil used is key, too. Thanks so much, both of you.

SustainablePantry January 11, 2010
I have been on the lookout for white anchovies for a while, and I haven't been able to find them. However, I am a real sucker for briney saltiness, so the canned ones are fine with me. I will continue to search out the white ones, though.

liamoran January 12, 2010
Thanks for the help! I am making dinner for a couple of girlfriends tomorrow...who specifically requested I make something I have never made before. I can't wait.

Sodium G. January 12, 2010
And if anyone is on a low sodium diet, I just made a major anchovie discovery - Natural Sea makes Brisling Sardines in water with no salt added - a meager 70 mg per serving which is less than a serving of chicken. I cannot wait to try this recipe.

Sodium G. January 12, 2010
And Crown Prince makes wild caught Kipper Snacks (naturally smoked) with only 70 mg of sodium. I think either these or the sardines would work as good low sodium substitutions.