The Coffee-Spiked Cake That Spanned Generations (and Families)

Several years ago, my sister Sheila and I lost one of our favorite recipes. Our mother Dorothy's Honey Cake had always been the star of our holiday celebrations, but the handwritten recipe had been misplaced. No matter how many times we tried to substitute other recipes for the Honey Cake, they all fell short—some had the coarse crumb of a bread or the overly-sweet taste of a dessert. None were our mother's. 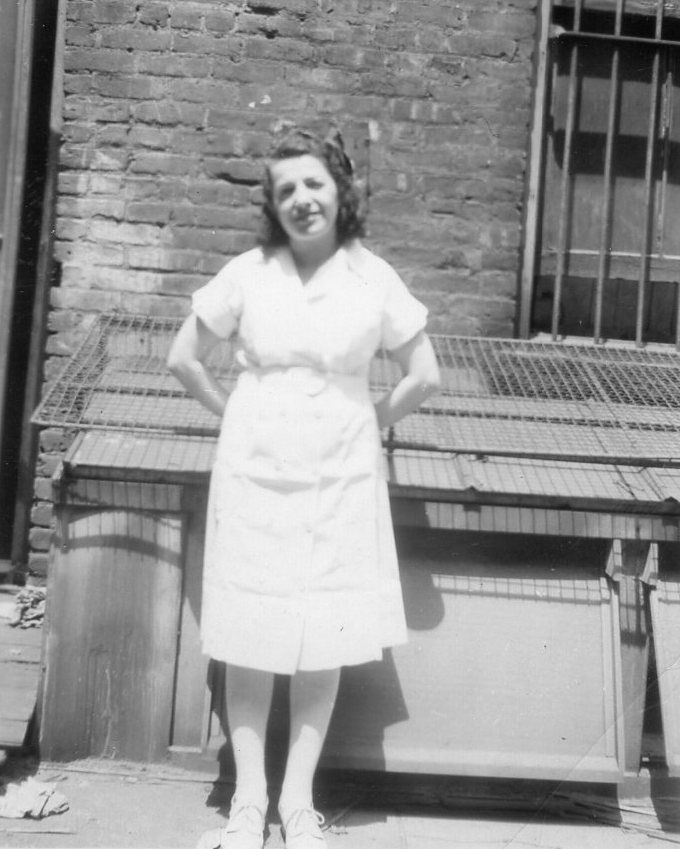 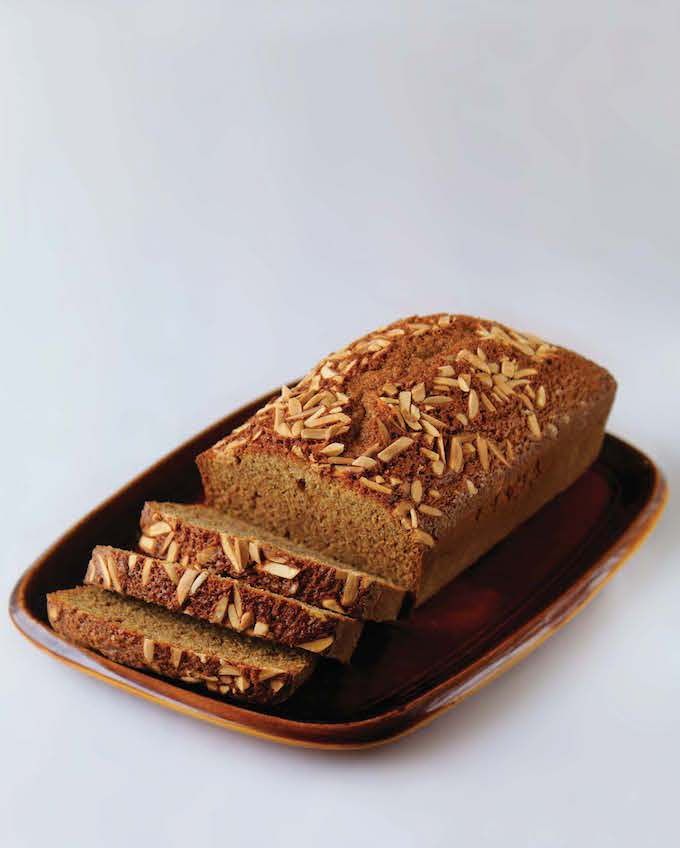 Left: Grandma Goldberg at her bakery in the 1930s. Right: Her famous Honey Cake.


When Hilary Finkel Buxton and I met at the water cooler at work at WGBH, a public television station in Boston, we quickly fell into the habit of discussing recipes that had been in our families forever, or as we called it, "sweet talk." One afternoon, my sister and I rhapsodized about our mother’s missing Honey Cake recipe, which lead to Hilary's proud description of her 101-year-old Grandma Celia Goldberg’s Honey Cake, which she, too, remembered fondly from childhood.

She told us that Grandma Goldberg came to the United States in the early 1900s from Yanushpol in what was then the Russian Empire. After working as a milliner, she married a man named Saul in the 1920s and helped him start a bakery in 1930. When Grandma wasn’t working side by side with her husband in the bakery, or raising her son, Irving, and her daughter, Fay, she baked her Honey Cake in her own home kitchen.

Hilary gave us a copy of the recipe written in her grandmother's own hand. When we baked it for the first time, we daringly added raisins. The raisins fell to the bottom of the Honey Cake, and the batter overflowed the single loaf pan we used for baking it. However, we could still tell that the flavor was almost exactly the same as the Honey Cakes our mother had baked for us in the 1940s and 1950s.

When I tested the recipe again, I engaged in a four-way email exchange to carefully decrypt the aged recipe with Hilary and Sheila in Boston, Hilary's sister, Sandy Hyman-Mehaffey in Pennsylvania, and I in my apartment in Cambridge, Massachusetts. Hilary emailed us that Grandma Goldberg always baked by sight and texture. Her call for "half a glass" could have been measured in an old jelly glass—I needed their help. 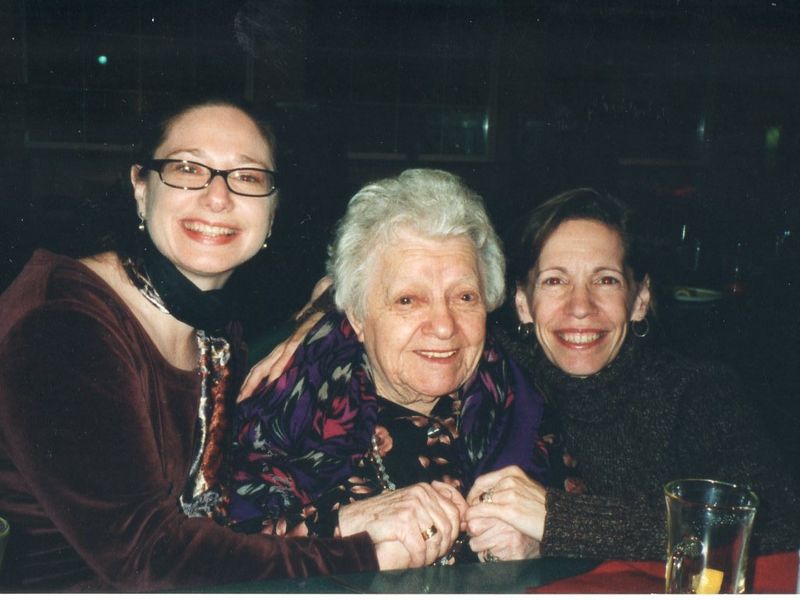 Hilary and Sandy with Grandma Goldberg on her 95th birthday


In addition to the imprecise measurements, there was no listed bake time, temperature, or pan size. (We had admittedly winged it the first time.) Over several emails, the call for a pan was translated into two loaf pans (Hilary and Sandy said that their grandmother would have made sure there was enough for second helpings), and the call for a mug of coffee got adjusted as well. As I assembled the recipe, my friends choreographed my every move, executing an email pas de quarte.

My own mother's influence came in when I sprinkled the batter with slivered almonds, the way our mother had done. Finally, I placed the Honey Cake in the oven of my galley kitchen and returned to my email correspondents.

While the Honey Cake baked for the 55 to 60 minutes we estimated it would take, we discussed Grandma Goldberg who died at the age of 101 in 2009. I had talked with Grandma Goldberg only once when she called Hilary at work. I still remember her sweet, wispy voice.

Time passed quickly, and soon my apartment was filled with the rich scent of honey, cinnamon, and ginger. After the cakes had cooled, I cut a piece from the center of one of them and tasted it. The honey and spices were just right, the almonds gave it the same crunch as the cakes our mother had baked so long ago, and the texture was perfect—delicate, but firm.

“Just like Mama made!” I emailed Sheila, Hilary, and Sandy.  “Grandma would be proud.”

With a little digging, we're sometimes lucky enough to unearth Heirloom Recipes, dishes that have made their way from one generation's kitchen to the next. This recipe appears in Marilynn and Sheila Brass's new book, Baking with the Brass Sisters.

Photo of honey cake by Andy Ryan, both photos of Grandma Goldberg provided by the Goldberg, Finkel, Hyman Family Archives

Marilynn and Sheila Brass are on a mission to bring old-fashioned American home baking back to everyone's kitchen. Their newest cookbook, Baking with the Brass Sisters, published by St. Martin’s Griffin, an imprint of St. Martin’s Press, embodies that philosophy.

us.macmillan.com/books/9781250064356
Marilynn and Sheila Brass are on a mission to bring old-fashioned American home baking back to everyone's kitchen. Their newest cookbook, Baking with the Brass Sisters, published by St. Martin’s Griffin, an imprint of St. Martin’s Press, embodies that philosophy.

Diana V. October 20, 2015
I grew up with this Eastern European honey cake as well from my Ukrainian mother : Medivnik
Honey bread! Thanks for the story.

Nancy October 20, 2015
I love stories like this! So often it is food that brings us together. A few years ago I had a similar situation where a friend happened to mention that he didn't think he would have time to make his grandmother's Kugelhopf for the opening of a film he had made about their sudden departure and exile out of Vienna at the beginning of WWII. One of the very few belongings that she was able to bring with her was her Kugelhopf pan. I jumped at the chance and offered to bake several of the cakes for the opening. The cake is wonderful, full of raisins and rum but the best part was that my friend insisted the cakes be baked in the actual pan that crossed the ocean with her. To say the very least, I was honored and the cake is favorite now of my family. Last fall some Austrian friends brought me a bottle of the rum that was traditional for these cakes so the circle of food and giving continues.

MLT13 October 15, 2015
Hello Marilyn,
We loved tasting "Grandma Goldberg's Honey Cake" last week in the Xhibition Kitchen. It was delicious! Thanks for sharing the backstory on the cake-such a serendipitous and "sweet" narrative. Keep the stories coming.
Hugs, Maureen