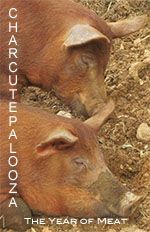 Proclaiming 2011 "The Year of Meat", bloggers MrsWheelbarrow (who is also a food52 community member extraordinaire) and The Yummy Mummy are leading the charge on a year-long salting, smoking, and curing project they've dubbed a "Charcutepalooza" (shar-coo-ta-pa-loo-za). Frustrated by the meat they've found on the market and eager to take a stab at this age-old art, these devoted home cooks put forth the following question: "Wouldn’t it be better to celebrate the appropriate, thoughtful consumption of meat with a year long exploration of the age old craft of charcuterie?" Why, yes!

Guided by Michael Ruhlman's able cleaver and recipes from his book, Charcuterie: The Craft of Salting, Smoking, and Curing

, anyone can follow along along with the monthly challenge completing the project for oneself -- and, "if you don’t know where to hang meat in your studio apartment, don’t worry" as "there will be plenty of projects that do not require hanging meat." A bunch of food52ers have already joined up and Ruhlman will also be along for the ride (weighing in when needed). Check out the "Ruhls" (ha!) and let the fun begin!

VivianBoroff January 16, 2011
I have pink salt, a pork belly on order, and am picking a little wine fridge this week. I can't wait to get started!

nataliesztern January 16, 2011
This, for me,is the most exciting all-inclusive event to hit the internet food blogging world since I began blogging over a year ago.

I am a charcuterie newbie who never thought of ever curing anything remotely related to what is colloquially referred to where I live, as Cold Cuts.

wanderash January 10, 2011
Oh my goodness! This is brilliant! Ingredients and conditions may be tough in Mexico, but I will most defiantly be along for the ride! Great project ladies! Thank you food52 for posting this.

TasteFood January 10, 2011
I've got duck breasts suspended from beach chairs stacked on moving boxes in my garage as we speak.

Head2Tail January 9, 2011
Having raised three heritage hogs (Tamworth/Berkshire crosses) and butchered them ourselves this past season, my husband and I have already started our own crazed adventure in charcuterie guided by Ruhlman's book. We are both excited to share the adventure of curing pork (and other meats when available) with other interested souls. Indeed, raising, butchering, and curing our own meat has taught me to never waste a morsel and to savor every bit. Good meat is, after all, lots of work. Bring it on!

pierino January 9, 2011
I now have another reason to live.

casa-giardino January 9, 2011
I just stumpled upon your "Charcutepalooza" feature. I do some meat curing myself. I'm interested.

mcs3000 January 8, 2011
I can't thank enough - @mrswheelbarrow and @theyummymummy - for this genius creation. I subscribe to both your blogs and they're two of my favorites.

I'm counting down the days to duck prosciutto. T-minus 5 days. It's been so much fun reading the #charcutepalooza comments. I've learned so much already.

lastnightsdinner January 8, 2011
Not even a full month in and already we're having too much fun :D

mariaraynal January 8, 2011
So happy to see this on Food52. MrsWheelbarrow and TheYummyMummy have created a fantastic movement. Let the Year of Meat begin!

MrsWheelbarrow January 8, 2011
Thank you all at Food52 for giving our project this nice shout out. We're having a great time and hope to lure many of you to the Year of Meat.

Rivka January 8, 2011
Yay for Cathy and Charcutepalooza! So happy to see it featured here.