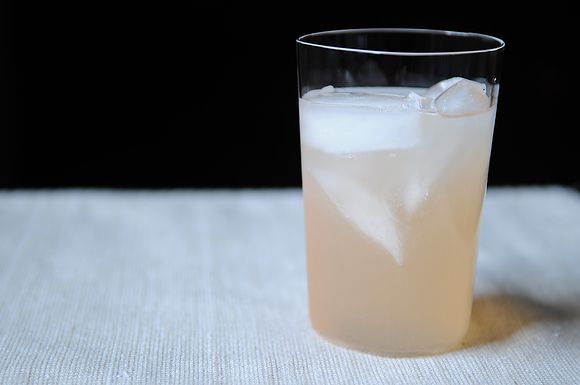 Often on Mondays, I haul in a batch of whatever I have cooked over the weekend for a sack lunch, and share some with my colleague C, as payment for explaining to me over and over, with a fair amount of patience, the difference between a rules vote and a motion to recommit.

He is not a habitué of the kitchen -– when not Hoovering down my lunch offerings and then tossing the empty Tupperware in my general direction with a “You can actually cook really well,”  his general culinary choices veer between Popeye’s Chicken or all manner of soup from the Senate carry out.

In short: C is never going to be part of an office pot luck.

But he recently did something even better. The only thing he loves more than an order of chicken with biscuits and red beans or soup crumbled with a pack of Cheez-It that he ransacked from the press gallery snack drawer are the Florida ruby red Indian River grapefruit sent to him from his in-laws. Last week, he generously handed two of these juicy citrus mamas over to me.

After pondering some fruit tarts on the site, I remembered that my friend Joshua would be in town, and so I decided it was time to try a new cocktail. I decided to check out Yuzu, I zu by Teri, for which I used the aforementioned grapefruits but with which you can make any of the citrus the author suggest.

I infused my simple syrup with the basil, though in truth I could not scare up the full amount here, which was not a problem as I still picked up a lot of the herb’s flavor. I waited impatiently for it to steep, cutting up my grapefruit, wiping down counters, asking the Incipient Pescetarian why she waited until Sunday at 7 PM to tell me about an extensive French class project; you know, the usual.

Finally, it was all ready to come together in a few large glasses with lots of crushed ice, without the help of a cocktail shaker (which would have been great here) but rather a chopstick used as an aggressive stirring implement. Ahhhhh.

A few points here: the author says that yuzu is very sour, and so I can see why you need so much sugar to balance that, but this ratio for grapefruit was too much for me, and I cut it with a bit more juice. Joshua’s wife, Jennifer, pointed out that basil and grapefruit are a pleasant and surprising mix of flavors and that the seltzer added just the right amount of exciting effervescence. I agree on both counts.

If you’ve got a deck nearby, or a friend with same, I suggest you mix a few of these babies up and stand there, wrapping your sweater around you as the sun sets, watching a robin red breast skitter across the yard. Both the drink and the scene are a harbinger of good days to come.

I pondered mixing up two and sneaking them to the Hill for Happy Hour. But I know C will have a Budweiser already waiting.

chris_coyle April 15, 2011
This is actually weird timing. You can get Yuzu from Marx Foods at: http://marxfood.com/index.php?s=yuzu&x=0&y=0

I just happened to have gotten a sample from them recently and have been playing around with it (never tried it before), so this post obviously caught my attention when it popped up in my e-mail. :)

mcs3000 March 28, 2011
I became obsessed with yuzu (and ramen, muji, etc.) during two trips to Japan in 2000-1. Finally, we had sun in SF today and toasted it with this drink. Used Square One's cucumber vodka. Cheers, Jenny and Teri!
Author Comment

mrslarkin March 28, 2011
Oh, boy, I could use one of these right about now....It's been a very long day. I hear grapefruit and tarragon are a tasty combo, too. Thanks, Jenny and Teri.
Author Comment

Jestei March 30, 2011
that sounds great too. all hail grapefruit.

ageekymom March 28, 2011
I love the idea of the citrus and the basil. I will have to look for Yuzu around these parts because grapefruit in all shapes and forms is verboten in combo with a medicine I take. I am determined to adapt this recipe! :-)
Author Comment

mklug March 28, 2011
Sounds delish--a few years ago I actually found yuzu-flavored vodka. I may have to look into that again and tinker with this!
Author Comment

gingerroot March 28, 2011
Ahhh...simply lovely. I have a yuzu starter that may fruit if I ever get it into the ground. Until then, I will try this with grapefruit or pomelo. Thanks Jenny and Teri!
Author Comment

Jestei March 28, 2011
lucky you to have such an exciting fruit at your ready.

boulangere March 28, 2011
On a whim, I picked up a bunch of pink grapefruit at the store yesterday! Your stories behind your recipes are so lovely. Thank you.
Author Comment

TheWimpyVegetarian March 28, 2011
My cousin lives in Florida very near the Indian River area where the grapefruit is grown. I can (strongly) attest to their wonderfulness. I love grapefruit and they are hands down the best I've ever had. I ate so many during one winter visit, that she gifted me with a carton of like 30 of them the following Christmas. And I used every single one between breakfasts, sorbet, and other dishes. Unfortunately I can't them in California, but I plan to make this drink anyway. Sounds so refreshing!
Author Comment

Jestei March 28, 2011
pretty sure i have see grapefruit at the farmer's markets in socal, bit i think if you can find yuzu, which i could find in no form anywhere, you should try that.

Midge March 28, 2011
I'm not a vodka lover but might have to make an exception for this. Sounds super refreshing. And I have to agree with drbabs, I know I'm in for a great read when I see your byline.
Author Comment

Jestei March 28, 2011
i am a gin girl myself but i think it would probably not work here. so give it a shot. and thanks for your very kind comments.

drbabs March 28, 2011
Harbinger of warm weather--coming soon I hope! Your Times article on Bobby Schilling (on the front page of nytimes.com!!) was outstanding. You are a magical reporter--you enabled us to get to know the man and the issues he faces, as well as the larger issues facing our government, and you stood solidly in the background. The story was so compelling, I didn't even know you were there. You really have a gift, Jenny, and we're fortunate that you share it so generously with us.
Author Comment

Jestei March 28, 2011
in the mutual admiration society, i tweaked a recipe last night per your comments and of course it worked better. you are always my guiding food light. thanks for your nice comments and bottoms up!!