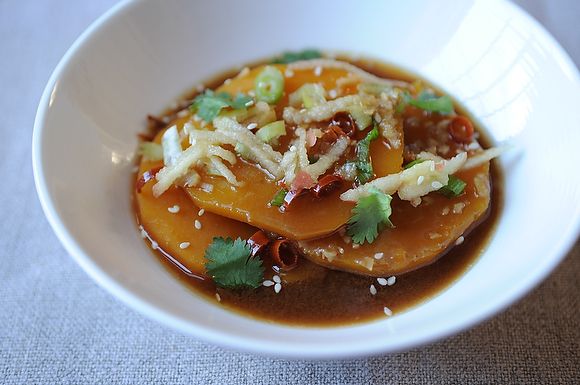 One thing I have learned as a kitchen duffer: it is important to always try new things, but one really must also respect one’s place. Who was I to go messing with the recipes of thirschfeld? I mean, sure, one can skip a garnish, maybe substitute an herb here and there, but in terms of seriously messing, in the words of George Costanza, who was I to play God?

In truth –- and Jenny tells you all the ugly truth about her kitchen, like about the pizza soup I made Saturday night, which should not be confused with the lasagna soup I recently had on a road trip in Illinois, because that was totally intentional -– I do not usually attempt our man in Indiana’s recipes during the week.

This is because, in general, I do not find them quite easy enough for a working mom on a Monday night, unless of course that mom is married to a guy who apparently starts his day butchering a chicken out of the backyard, then cooking up something incredibly fabulous for his family with the kill, which is sort of like a Bridges of Madison County for the foodie set scenario.

But I decided to take the plunge as I clicked around the site looking for something to do with red miso. (This is an ingredient that needs no further explanation, right?) So I landed on Red Cooked Butternut Squash by thirschfeld, a recipe for which I had almost every ingredient, including my super-awesome homemade beef stock, which I highly recommend for this dish.

But then, I had to go get all short-cutty. Mistake. First of all, I used frozen cubed butternut squash, thinking this would shorten the prep and cooking time. Also, short on chilies, I sprinkled on some red pepper flakes instead, which really, of course, does not have the same effect. The net result was a bowl of soy and beef scented mush, unpalatable, deeply wrong.

But the hint of miso and the depth of the broth were just enough to nudge me to go back to the recipe a day later, with the proper vegetable (I only needed one large squash to get the slices he calls for) and the correct use of seasonings. (Okay so I never got a chili. But this time I used a squirt of sriracha instead, which in my view is an imperfect though highly reasonable substitute.)

Because this is basically, as our author suggests, a braise, it is truly a very simple dish to make, as long as you have the components on hand. You get your broth going in a few seconds, and during that time, you will be peeling and cutting your squash. While it cooks, you make the rest of your dinner.

About a half hour later, a highly fragrant, slightly sweet and pleasant looking bowl of squash is at the ready. Because side dishes are my enemy, I decided to dump this over a bowl of jasmine rice, mixed with some Korean-style skirt steak leftovers from the night before. Had the cilantro at the store not looked so punk, that would have been the final delightful touch for me. As you know, I do not garnish, but for thirschfeld, at least I considered it.

SERVES 4 AS A SIDE DISH

I_Fortuna July 3, 2013
Add me to the Jenny groupies! Jenny you have so many recipes that I love or have made in some form and some really great new ones to try. Also, thanks to thirschfeld. This is new to me and I always have miso in the fridge. I love butternut squask and I can't wait to try this. Thanks for all your great recipes.

magdance April 11, 2011
I found this excellent and an innovative approach to butternut squash. I added ginger, and next time I would lose the beef broth (for the poor flavor of canned) and use more miso instead. I liked it with lots of crunchies on top: parsley, chopped green onions, finely chopped jalapeño and sesame seeds, plus an added dash of soy.

Blissful B. April 5, 2011
I have also experienced the disappointment that is frozen butternut squash. This winter, my grocery store only had HUGE butternut squashes (their size made me laugh out loud in the store, if that's any indication.) I was assured they freeze well, so I cooked 1/3 of it & froze the rest. It's true that it froze just fine...as long as I didn't care about taste or texture. Good for you, for giving the recipe a 2nd go! We are all Thirschfeld groupies.
Author Comment

monkeymom April 5, 2011
I completely agree about thirschfeld...I'd just like to add that this picture of thirschfeld's recipe is just stunning. Jestei, thanks for sharing what happens when things don't work. I find it comforting to know I'm not the only one who messes stuff up in the kitchen.
Author Comment

Jestei April 5, 2011
you should move into my house and see the sad events that unfold each day.

mcs3000 April 4, 2011
I am solidly in the kitchen duffer camp, so I will not mess with thirschfeld's recipe. When I do make it, I'm going to try it over rice and Korean-style skirt steak. Yummm! Finally, I owe thirschfeld big props for what may be my very favorite recipe on food52: Tipsy maple corn: popcorn coated in Jack Daniels-infused syrup, peanuts + pancetta.
Author Comment

kellyrossiter April 4, 2011
Ah, Jenny, you sound like my kind of girl. I love your posts. I read them all, and they always make my culinary day.
Author Comment

Sagegreen April 4, 2011
Thanks, Jenny. How brave. I have only been in the try-thirschfeld-on-the-weekend club 'til now! But a promise of weeknighters designed with you in mind will be a great gift to us all!
Author Comment

Jestei April 4, 2011
you've got some pretty sophisticated recipes in your box too friend, i look forward to trying many of them!

thirschfeld April 4, 2011
I can't imagine anything better for this dish than spooning it over rice and Korean style skirt steak. Thanks for making my recipe and I promise I will try to develop some weeknighters for you.
Author Comment

Jestei April 4, 2011
ohhhhhhh that would be very exciting. DO IT!

edamame2003 April 4, 2011
I found myself reading this like an email, ready to 'Comments in CAPS below' and nodding in agreement with everything you've experienced here. and kinda chuckling at the frozen squash incident. thanks for brightening my day. and thanks thirschfeld for giving us gorgeous dishes to dream about and sometimes attempt.
Author Comment

Jestei April 4, 2011
thanks for your nice comment. i hope you try this dish.

Bevi April 4, 2011
What a great read to start off a Monday! And what a great paean to a giant influence on this site,
thirschfeld!
Author Comment