Dinner and a Movie: The Age of Innocence

Our videographer Elena Parker -- a serious food and film buff -- is really good at throwing movie-themed dinner parties. She and her friends cook together, serve up, and eat while they watch. We've asked her to start sharing the menus for her favorite films with us -- here's the first installment!

Imagine entering the drawing room in which "New York’s most chosen company is somewhat awfully assembled." Sounds stuffy, no? But — if you were doing so, if you happened to be wearing a gorgeous red gown, and if you also happened to be Michelle P feiffer, then you would, of course, be in the midst of Martin Scorsese's lush and highly addictive adaptation of Edith Wharton's The Age of Innocence

(and one of my all time favorite films). 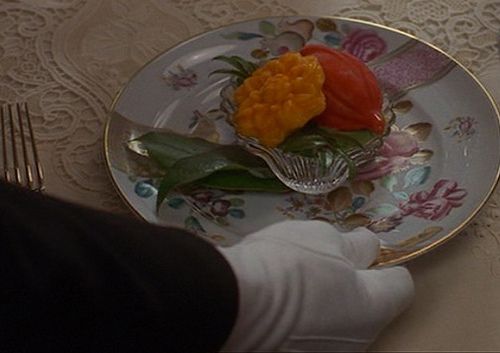 Set among the high society of late 19th century New York, the food in The Age of Innocence is more than mere set dressing. The plot, emotions of the characters and satirical voice of Wharton herself shine through the meals — both in the plates and assemblies. As the film plays out the forbidden romance between Newland Archer (Daniel Day Lewis) and the passionate and unconventional Countess Ellen Olenska (Michelle Pfeiffer), their meetings over teas and seated around dinners vary from the utterly romantic to hopelessly crushing and all of the veiled emotions are crystallized in the meals. 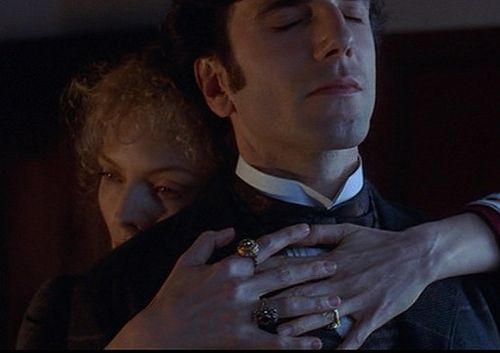 This particular menu is meant to reflect an event held at roughly a half hour into the film: dinner at the van der Luydens. I choose to mark this occasion because it is the film at its most sardonic — you don't want your guests crying into their first course, after all. To quote the film's narrator, "Dining with the van der Luydens was, at best, no light matter... dining there with a Duke who was their cousin was almost a religious solemnity." This statement is no less than perfectly captured in the image that accompanies it: pieces of a whole baked fish and servings of caviar being lifted, gingerly, onto a plate.

(On a side note, keep your eyes peeled for the single most amazing acting moment of all time at 30 minutes 14 seconds, when Day-Lewis simply says the word “ yes.” You have permission to swoon.)

Dinner at the van der Luydens: A Menu from The Age of Innocence 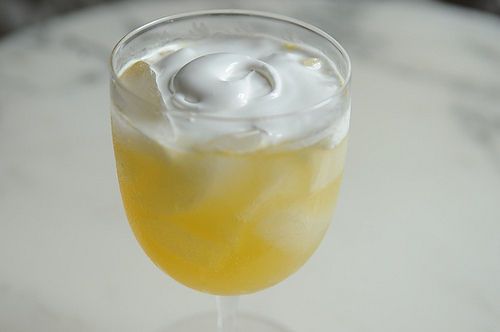 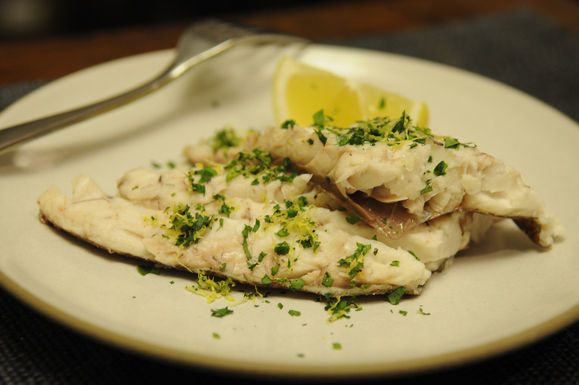 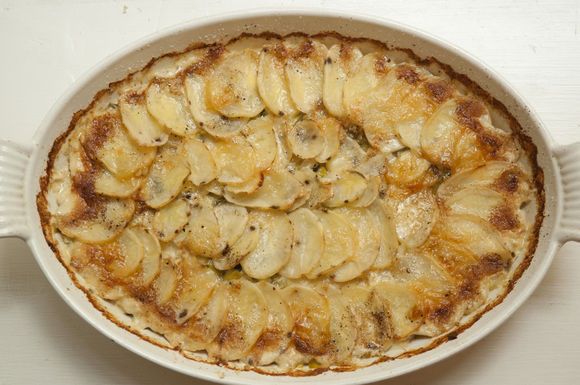 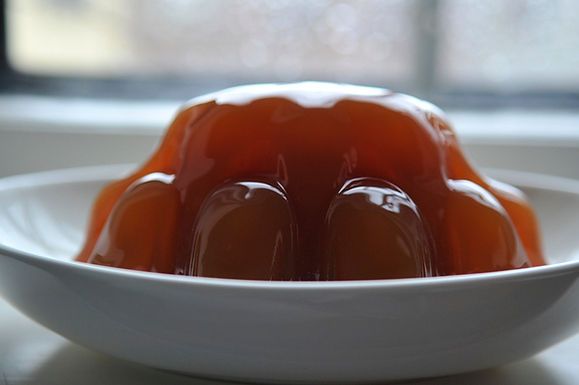 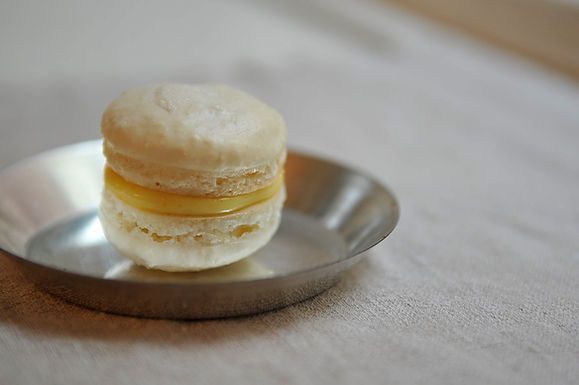 cinefoodie February 3, 2014
Wow! Love this kind of article that marries the worlds of film and food. What an excellent dinner party idea, and the recipes look great. Bravo. We here at cinefoodie.com are constantly looking for the best food from film, as well as where to find it, and how to make it, so this is right up our alley. Keep'em coming!

However, Brenda Dayne reads it for librivox.org, and she reads it beautifully. All of the nuance is in her reading... not so much in the film.

janelear April 19, 2011
Lovely to see a great movie appreciated anew, but I was stunned to find no mention whatsoever of the person who created that food, the singular food stylist and culinary historian Rick Ellis. The food in a movie does not miraculously appear out of nowhere! Rick's scholarship and extraordinary attention to detail and accuracy—not to mention his brilliance behind the stove—not only brought the food to life, it was a widely praised study of class during the 1870s in New York City. Each meal that was filmed offered a window into a different level of society. I was however, delighted to see here that Rick posted a comment. He is far too modest.

lacerise April 18, 2011
This was my favorite film for many, many years, and is the only movie I've ever purchased. My favorite scene (and, I think, the hottest in just about any movie) is when Newland and Ellen are riding in a carriage and he unbuttons her gloves and bares her wrists. It took my breath away when I saw it in the theater for the first time.

rickellisfood April 13, 2011
It was a pleasure and an honor to work with Mr. Scorcese in developing and styling the various meals for this film. Daniel Day Lewis asked for a plate of the turkey dinner for his lunch that is one of the first food scenes featured in the film.

elenakathryn April 14, 2011
Rick- So nice to hear from you. Your work on this film was astounding!

Sharon January 11, 2014
Rick, your food was so lovely in The Age of Innocence that it inspired me to do a "search" for the menu, after watching the movie on TV tonight. I'm a chef who loves to feature movie-themed menus. I was wondering who was responsible for the enchanting food, and I'm so glad that you posted here. You are indeed an inspiration. Thank you!

Anthony C. April 12, 2011
Someone asked about the "big pasta thing" from "Big Night"--well, we have it in our book! (It's not a hard recipe, but it does take a long time to make.)
Here are the movies we did include in "Cooking with the Movies":
Tampopo
Like Water for Chocolate
Chocolat
Goodfellas
Big Night
Mostly Martha
Dinner Rush
Gosford Park
Titanic
Tortilla Soup
What's Cooking?
Once Upon a Time...When We Were Colored
Waitress
Babette's Feast
We wanted to include a few more but ran out of room....

smartcat April 12, 2011
After reading this blog for ages, this is the entry that inspired me to join. We have loved doing food movie festivals, but have never done food to go with a film. Love it.

I look forward to many more combos.

Would love to try the Big Pasta Thing from Big Night!

Besides the ones already mentioned here, the films that immediately come to mind are The Godfather (obvious, but every other scene is set around a meal); Like Water for Chocolate (gorgeous romantic food); Tom Jones (beautiful young Albert Finney and gluttony - great combo); and Tampopo (Japanese noodle fest.)

checker April 12, 2011
amysarah - In my imaginary life I do costume design for film, particularly for stunning period pieces like this movie. And much like you I am pretend highly specialized. Maybe we should get together and make believe that we are filming a movie?

amysarah April 12, 2011
checker - absolutely. Before you know it, we'll be hallucinating that we're accepting Academy Awards. I'll have my people get in touch with your people.

Anthony C. April 11, 2011
Thanks for bringing this movie and meal to our attention. Although we had to limit ourselves to 14 films for our book "Cooking with the Movies," we did try to present a variety of cuisines. And we included recipes for the blockbuster film "Titanic," for the special first-class dinner, and for "Gosford Park." Many of those recipes might be suitable for an "Age of Innocence" dinner too.

elenakathryn April 12, 2011
Your book sounds great! "Titanic" definitely crossed my mind while I was choosing these...

checker April 11, 2011
My all-time favorite book. Ever. And I was an English Major, so that's not easy for me to say. I have read it dozens of times, and yet I still hold my breath in so many scenes. In fact, my heart is actually racing right now, just thinking about it. And this is one of the only times where a movie gets it right. In my tiny community garden patch I devoted a space to growing a yellow rose, because this book contains my favorite moment in all of fiction - books or movies. "Do you think her lover will send her a box of yellow roses..."

elenakathryn April 11, 2011
I love, love that scene, checker! Though, I have to say, I'm most particular to the Boston Common scenes...

elenakathryn April 11, 2011
And of course, when i say particular, I mean partial.

checker April 12, 2011
After about the 10th time reading the book and watching the movie I decided to force myself to pick a favorite scene, and ultimately went with the roses. But those Boston Commons scenes... And I dream of living in her house. Lord, I could go on and on.

Audrey R. April 11, 2011
I don't know what I want to taste first the meal or the Film. Invigorating.

fiveandspice April 11, 2011
This is wonderful! Absolutely fabulous - fun to read and see and think about!

Burnt O. April 11, 2011
I came down with a bad cold yesterday (probably from teaching a make your own pizzas and crepes class to a bunch of adorable 10 yr. olds on Friday), and curled up in bed and watched "Eat, Drink, Man, Woman". Director Ang Lee used more than a dozen "stunt hands" of expert Chinese chefs for the close ups of the opening scenes where the Father prepares one the unbelievably elaborate Sunday dinners. There is a fluidity and grace, as well as an unbelievable efficiency of movement in those opening scenes. Not a single movement is wasted. It's like watching ballet.

[email protected] April 11, 2011
Making movie dishes puts you inside the film. Making cailles en sarcophage from Babette's Feast was a challenge but the result ... well, it came out perfectly... although boy was I holding my breath a lot! BTW, a version of Punch romaine (and there are many---it was popular for decades) was served on the last night on the Titanic!