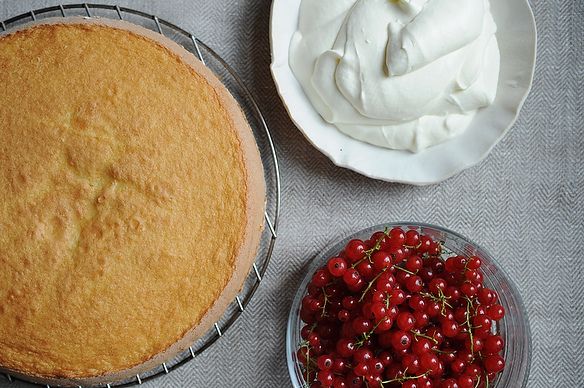 Sometimes, you come by a recipe in such a backwards way that the only explanation must be that you were meant to make this dish. This was the case with Tender Yellow Cake.

Let me first state that I do not need any more cake recipes. Or cookies or pie or slumps or macaroons or confections of any manner. (Or is it nor? Someone will no doubt weigh in.) My point is that my folder of savory recipes is about 1/3 the size of my dessert one (this would be manila folders that I have been “organizing” for the better part of a decade) and I need not be on the troll for more sweet stuff.

But then I had this lovely little container of currants from the farmer’s market, the sort of thing one purchases with no plan at all and finds herself dismayed that one is not automatically revealed as the week goes on. I tried drying them in an oven. Fail. I put them on a tray outside, but nothing happened other than the growing sense of paranoia that a small animal or bird gave the berries an unsanitary lick.

Amanda, who tires of my late night instant message rants about ingredient confusion, suggested I put my currants in a cake. A mad search ensued, and this cake looked so incredibly delicious, I decided to make it instantly. Then, I came up with an even better idea -- make the incipient do it.

I would like to report to you that she abandoned her Facebook page cheerfully to do so, but let’s settle for the fact that she was rewarded with the satisfaction of a cake well baked, and stopped grumbling once it came out of the oven.

This is truly a child’s cake in terms of ease; a few eggs whipped up are the only tiny small extra step you take. The results are truly amazing, especially given the effort: it has the light texture of a sponge cake, with the deep vanilla kiss of a heavier cake. I will take this moment to once again praise the use of oils in cakes, which I think often yield something far easier and delicious than my beloved butter versions.

The only things we did differently from sdebrango is make it in a sheet pan (baked for 30 minutes on the nose; your oven may vary) simply because we felt like it; use the standing mixer the entire time, because we’re lazy, and eat it while it was still hot, because we really could not stand to wait.

This cake was very fine on day two, when I covered it with the currant compote I made stove top (pint of berries, ¼ cup of sugar, and ¼ cup of water cooked for quite a while). As it turns out, the cake is a perfect vehicle for syrupy things. “The absorption rate is spectacular,” commented my colleague, C, as I presented him with the cake after a particularly tedious vote. This is true. But I would eat it plain, right out of the pan, happily.

cririz December 23, 2013
This is the cake I've been searching for. Tender crumb, stays moist for days. I suspect it's the oil instead of butter and beating the egg whites with the sugar until stiff and glossy. Brilliant!

lorigoldsby July 6, 2011
Thanks Jenny and Sdebrango! I've been telling my daughter that a "scratch cake" is as simple as a box mix but twice as good and half the cost! Looking forward to this.
Author Comment

TheWimpyVegetarian July 5, 2011
My granddaughter's birthday (she'll be 4) is coming up the end of this month and this will be the perfect cake for it!! Thanks for highlighting a great recipe Jenny and thanks for another great recipe sdebrango!!

Soozll July 5, 2011
I'm so glad you used this cake for your current currant experiment. (sorry, couldn't resist) My birthday is coming up and every year I try to make the Boston Cream Pie that I remember and every year I fail. This cake reads like it might be what I'm looking for. ...And since your daughter made it, I can't live with any sense of dignity that a kid could do something I can't . You see, I'm sponge cake challanged (it fails every time I try one) but this doesn't appear as fussy.
Author Comment

Jestei July 5, 2011
if it makes you feel better, i did her eggs for her. but you can certainly make and enjoy this cake on your own. i promise it is delicious.

mariaraynal July 5, 2011
I've never eaten a currant. My dad grew up on a farm in upstate New York and spent his childhood "picking the #[email protected]$%@# currants." I think he's forever traumatized and they were therefore banned in my home.
Author Comment

Jestei July 5, 2011
i had a similar blueberry trauma seeded in paw paw michigan. but i am moving on at last.

thirschfeld July 5, 2011
I have been looking for a good yellow cake. Guess I need look no further.
Author Comment

Jestei July 5, 2011
eager to hear what you put on it thirschfeld!

boulangere July 5, 2011
"make the incipient do it." Love it! You're so much better a mother than I was.
Author Comment

Jestei July 5, 2011
I think the word you are looking for is lazier!

What size sheet pan did you use, Jenny??
Author Comment

nogaga July 4, 2011
Mmmmmm! And another use for raspberries if for some eason you happen to be out of red currants ;)
Author Comment

Jestei July 5, 2011
yes i never saw currants on the west coast, or if i did they were rare. so i am thinking of doing this again while in LA with macerated strawberries and cream.

nogaga July 5, 2011
That sounds great too... Am thinking of using Merrill's boozy cherries for this too ;)

Kitchen B. July 4, 2011
Sounds like a great recipe - thank you Jenny for showcasing easy to assemble recipes!
Author Comment

calendargirl July 4, 2011
Glorious! I have Merrill's Best Lime Ice Cream chilling in the freezer now, but this cake will be my next dessert. Thanks for spotlighting this. My recipe "file" is heavy on savory stuff; perhaps we should trade.
Author Comment

Jestei July 5, 2011
that sounds like a divine plan. both actually.

Midge July 4, 2011
Thanks for reminding me about this lovely cake! I've been meaning to make it since sdebrango posted it. Love the compote idea too.
Author Comment

JenniferF July 4, 2011
Sounds so good. Reminds me of torta frutti di bosco, my favorite currant dessert. Sounds like this cake would be fantastic with ricotta whipped cream, too. Now I'm hoping that my market has currants tomorrow!
Author Comment

drbabs July 4, 2011
I'm with you on the dessert recipe collection. I hate it when I invite people over and they say, "I'll bring dessert." (And then it's some store bought thing that I inevitably hate and end up throwing away.....) But enough about me. Happy 4th, Jenny! And thank you for sharing sdebrango's lovely recipe with us!
Author Comment

Jestei July 5, 2011
oh yes. the store bought dessert sadness. i know that outcome all too well.

aargersi July 4, 2011
Now I wanna bake a cake too. Made a big batch of blueberry fig sauce yesterday. Oh and since you started neither with either or neither I believe the use of or or nor is completely up to you. Say that 3 times fast.
Author Comment