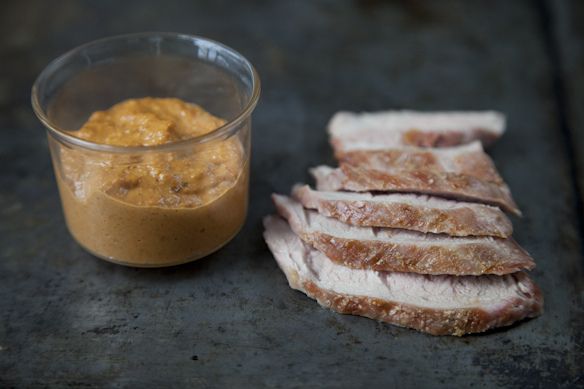 I need to share my feelings here, people: I don’t like bell peppers. I don’t like their texture, or their weirdly watery taste. They are a food that gives no pleasure, at least to this palate, even as they fail to directly assail -- they are, in short, the candidate whose name you can never remember, but very much would like to go away.

My colleague and Food52 lurker Steven Lee Myers, when told of this hatred, said: “I feel like your therapist and I've reached the breakthrough moment when I understand everything that is wrong with you! I think we start with the Portuguese salsa made of red peppers and salt, called mahgleta, and then we work through roasted red peppers then we tackle romesco sauce and ratatouille!”

But how did this become about him?

Anyway the point here is that I have an affection for Grilled Pork Tenderloin with Roasted Red Pepper Sauce, because the sauce here is very tasty, but also because it’s a recipe that cuts your work in half.

My husband, who still struggles to properly salt a vat of boiling pasta water, loves nothing more than to fire up his new grill. (Why new? Because he gave the one in L.A. to the movers? Why? He never really explained.)

While he knows his way around steaks and burgers, he had never done a pork roast on the grill and was very pleased with lorinarlock’s very specific cooking instructions, right down to the minute, which were exactly correct. If possible, please do this recipe on the grill, because a pork roast, salted up and grilled, is, as it turns out, a tender thing, far more juicy than one cooked in the oven. Thanks USDA for those new pork cooking temperatures.

While the grill was heating, I did the peppers in the oven, then popped them in the plastic bag for later peeling. My neighbor showed up, looking hungry and carrying some chocolates from Norway. As we chatted, I tossed all my ingredients into the food processor, one at a time as instructed, while my husband managed the grill. The joy of leaving the meat to someone else cannot be overstated.

This sauce (which I doubled as I made two roasts) whips up into a feather red concoction, all the more so if you do NOT make my one terrible error, which was to use whole pumpkin seeds when apparently the little green ones were what the author had in mind. Little flecks of shell offended me, but not the neighbor, who proclaimed she would like this sauce on pasta. I am not sure about that, but it is nice when dipped into with pita bread.

The husband proclaimed he would like the pork all by itself, so beguiled was he by this new meat for his grill. I pointed out that that would not be a recipe. He disagreed, and then my neighbor started to explain to us how it is very important to learn Latin. And then we ate #APieForMikey, and did the dishes.

Like Jenny? Make your own ricotta with her for Lemon Ricotta Spaghetti with Arugula

Lizthechef August 17, 2011
Mrs.Wheelbarrow's Asian plum sauce is the last - well, almost - thing I will can this summer. It is wonderful and I wait until late summer when plums are at their peak. This is a perfect marinade for pork t'loin...

mariaraynal August 16, 2011
We made a pork tenderloin on the grill this summer and it was fantastic. I have a hate-hate relationship with bell peppers, especially the green ones. I can almost tolerate the reds and yellows, when completely overcooked and mixed with many other foods. And LOL at excluding bacon from the pork-is-poison mindset!
Author Comment

Jestei August 17, 2011
yes i think that pork thing is funny too. i am so happy to have learned this new method.

Blissful B. August 15, 2011
Look at all of these food confessions happening on Food52! First, Merrill admits a long-held aversion to seafood & now you with the peppers. As a former picky eater, my heart is warmed! (And like both of you, I continue to work on my aversions, but some tastes can be stubborn.)
Author Comment

mcs3000 August 15, 2011
I don't like bell peppers either, but you're batting 1.000 on recipe suggestions so I'll try it sometime. btw: loved the lemon ricotta spaghetti with arugula - made it twice. Next time, hope to make the ricotta too.
Author Comment

lapadia August 15, 2011
What a co-incidence, over the weekend we grilled a tenderloin and had slices of it with ChezSuzanne's Red Pepper Jam on AJ's Cuban rolls...grilled pork tenderloin is great with "red pepper anything!" So, I know this recipe will be delicious!
Author Comment

boulangere August 15, 2011
I was right there with you on the pumpkin seed thing.
Author Comment

Burnt O. August 15, 2011
Only 1/4 pound of pork tenderloin?? That's only one meager serving - not four. Grilling it that long would make it shoe leather. Are you sure this is the right amount?

Kristen M. August 15, 2011
Yes, somehow the "1" fell off in transferring from the recipe page -- our error, not lorinarlock's (or Jenny's!). It should be fixed now.
Author Comment

Lizthechef August 15, 2011
I missed this recipe and am so grateful to have it. We have been grilling pork tenderloins all summer, "we" being my husband...Thanks!
Author Comment

hardlikearmour August 15, 2011
Pork tenderloin is one of my favorite cuts of meat for the grill. It's fabulous. It cooks quickly and takes to a wide variety of rubs and sauces.
Author Comment

drbabs August 15, 2011
I keep telling my husband that he would love pork tenderloin, but he can't seem to get over the pork-is-poison thing from having grown up in a kosher home. (This, of course, excludes bacon.)

melissav August 15, 2011
So funny. Just this weekend someone asked me if my family kept kosher growing up. We didn't except my mom never cooked any pork products, with the only exception being bacon, which we, of course, had almost every weekend! I don't think I had my first pork tenderloin until college.
Author Comment

Jestei August 17, 2011
i do understand. i didn't eat pork for 8 years feeling that two out of three major religions could not be wrong. then bacon broke me one summer at a beach guests house, and it was STILL another few years before i would cook any other form in my house. crazy.