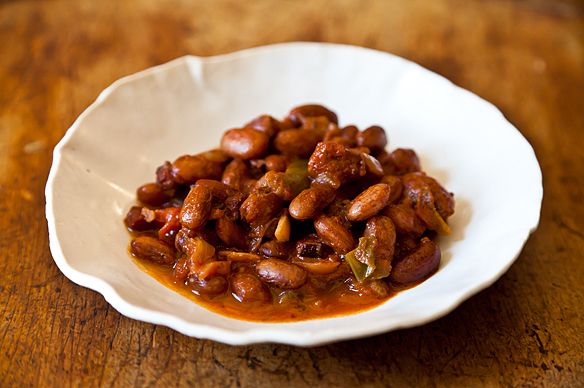 Lately I’ve been on a goldilocks-like journey through the world of bean recipes. Some are just too spicy, others shockingly bland. There are recipes that call for chopping this and that and yet give me too little flavor yield, and others that involve bell peppers, which stimulate my hostility.

My search for a hearty and flavorful bean dish was launched by my need to find a recipe that is both easy and proportioned for a group, as an offering to the neighbors on our night to cook. As I have mentioned in this space before, we cook for a family of four two doors down on Mondays, and they return the favor on Thursdays. There have been enchiladas (theirs) and spicy turkey meatloaf (ours) and all manner of large salad. This week, I turned to beans. Beans, I say, in spite of my husband’s skepticism over their, um, fibrous quality.

After trying a few different recipes, I settled on Borrachos by lastnightsdinner for the combination of ease and flavor, and the fact that you can meddle with it in ways that will render no undue harm unto your taste buds.

Let’s start with the beans themselves. You can opt for the quick soak method, as lastnightsdinner recommends. I did note that some cooks found this left their beans too hard for too long, though it was suggested that this could be mitigated by adding the tomatoes later in the process, as the acid may hinder softening. (Don’t you love this community and all its food science deliciousness?) Or, of course, you can also soak them overnight.

I, being me, went halfway, and soaked my pintos about six hours while I did other chores and errands. I can tell you they turned out perfect in texture, per the cooking instructions. (I can’t speak to canned beans other than they would take far less time to cook obviously, and probably would not be as nice.)

Moving on to the next steps. I used one large yellow onion and boy did it smell delicious cooking in that bacon fat. I omitted the chilies because I thought they were not child-friendly. If you want your beans to have a kick, you know what to do here. I tried to find Mexican oregano but failed; I clipped my own oregano from the garden, dried it in a 150 degree oven for an hour and crumbled that in. It was mighty fragrant, but my understanding is the Mexican version would lend a sort of “dustier” taste, in a good way. Feel free to weigh in below on this.

My beer of choice was Red Stripe, and it was a perfect fit; beer makes these beans, people. I was out of diced tomatoes, and used tomato paste (about 1 heaping Tablespoon) instead, which I actually prefer because this dish has a fair amount of liquid, and does not need more; the paste gives a nice tomato concentrated flavor.

Okay, reading this back it seems like I did a lot of changing. Really it’s on the margins. You’ve got options here, that’s all I am saying. I recommend you make this on a weekend afternoon as you go about your other household business -- which may or may not be sitting with two other women at your kitchen table drinking hard cider and eating cheese and stopping occasionally to render a verdict on your children’s outfits or adjudicate a fight over Salt and Vinegar chips which, in fact, are extremely worth battling over.

Let the dish sit overnight in the fridge. Have some for breakfast. Squirt a little Sriracha in if you need the kick. You might not though – I loved the smoky, slightly beer-soaked comfort of this dish, which would be wonderful with a chunk of warm corn bread. If you’re cooking for others, feel slightly sad as you watch this dish make its way down the street.

Like Jenny? Read more of her weeknight trials and tribulations, with whoopie pies and such, here.

luvcookbooks January 8, 2017
This is a delicious change from our standard rice and beans dish. I have it simmering downstairs on a Sunday afternoon so we can look forward to it at the end of the day one night next week. Maybe with cornbread instead of rice...

phyllis September 16, 2011
Last week-end we had an end of summer BBQ for 40. After cooking fancy bbq dishes and sides for years, I decided this one would be easy with fabulous thick, juicy burgers, hot dogs, a few sides and your bean recipe. I doubled it, used Jenny's changes, added a few of my own, and had a large pot of amazing beans. At the end of the evening, there was one spoonful left, and everyone commented on their deliciousness. Thanks so much Jenny and lastnightsdinner. This recipe has been added to my list.

Sagegreen September 10, 2011
Looking forward to making a huge pot of this soon. This is the perfect recipe to have as the work day gets longer and the light fades so much earlier. Coming home from work already in the dark...this is a bowl I want waiting.

GretchinF September 8, 2011
I made this the other night and for the most part stuck to the main ideas in the recipe but I did add fresh peaches and it was incredible. Thanks for the idea!

PVDcook September 7, 2011
The dish overall was incredible, but I felt like the beans themselves were a little bland. Am I just too used to the canned salty variety? Would adding some salt to the water when I boil the beans help?

Jestei September 8, 2011
Did you use the chilis? I assume you did not skip the bacon or beer. Definitely season to taste...Anyone else here?

healthierkitchen September 6, 2011
This has been in my "saved" recipes for-ever and I always mean to make it. Thanks for the reminder and the entertaining description!

pierino September 5, 2011
Jestei, I think there is a city ordinance in Chicago that proscribes putting ketchup on a hot dog, but you as a political writer would possibly know. At best you'll just be called a sissy. Sriracha though, is a great American success story. The guy who developed it began by selling door to door to Asian restaurants in the San Gabriel Valley. And then it spread to diners across Southern California. And then...

garlic&lemon September 5, 2011
To make these for a weeknight, start the night before and use your crock pot! Wash and pick over the beans. Then put into your crock pot (no need to soak!) with 5 cups water, the tomatoes, the beer, salt, 1 onion (peeled & cut in 1/2), 2 cloves garlic (peeled and crushed just a little). Just before you go to bed, set the crock pot to LOW and cook for 6-8 hours. The next morning, fish out the onion and garlic and put the beans in the fridge before you go to work. About 45 minutes before serving, put the beans into a pot for the stove make a sofrito: Cook the chopped bacon as directed. When it browns, take it out with a slotted spoon and add to the beans. In the rendered fat, cook another chopped onion and 2 cloves garlic, chopped, along with any chiles you will want to add. When this is golden, dump the whole deliciousness into the beans along with the herbs. This is a good time to judge whether the beans are too watery or not soupy enough. Cook for 30 minutes (or more if you want) so the flavors will blend. Cover or not, depending on what thickness you want in the end product.

Fairmount_market September 6, 2011
I'm a big fan of cooking beans in the slow cooker: it minimizes the effort involve (no presoaking) and I think it gives the best results by allow the beans to plump up and cook slowly. I have a slow cooker that can go on the stovetop, so I'll start a pot of beans by sauteing onions and garlic and spices, then add the liquids and beans, plug in the slow cooker and leave it alone.

mcs3000 September 5, 2011
The Rancho Gordo stand at the farmers market is one of my faves. Excited to try this recipe. Red Stripes are already in the frig :)

pierino September 5, 2011
Yesterday I was part of kitchen team that was cooking for a community dinner for sixty people. My contributions were Santa Maria tri tip (traditional here) along with pinquito beans aka "little pinks". As I was cooking about six pounds of them I did give them the overnight soak. The next morning I added more water, seasonings and a few bay leaves and simmered them for about six hours. I wanted to throw bacon or a ham hock in there but it was also part of the menu that had to feed vegetarians (about 8% of the attendance). On the condiment table I did leave out a bottle of a locally produced hot sauce; not too hot. I think sriracha (the ketchup of 2011) is a little too strong for this. And the flavors don't really match.

Jestei September 5, 2011
i was really itching for a fight with you (who doesn't love ketchup! sriracha is good in EVERYTHING! you're SO pierino about my beans) but i feel in the spirit of honest debate that i must concede you're right. a less hot hot sauce, and of a more southern ilk, would actually be better.

Bevi September 5, 2011
Mmmmmm -This sounds like a great, easy meal put together. Perfect to make while delving into movie watching on a rainy day.

lastnightsdinner September 5, 2011
Wow, thanks for trying out my recipe! I grew up on my grandma's version of these, and you're so right, these love a good slab of cornbread on the side. That plus wedges of summer tomato and I'm in heaven :) Canned beans will work in an absolute pinch, but I don't recommend them, as you lose a lot of the texture and flavor that comes from slow-cooking. And as you note, they are very, very adaptable - I've used all of the substitutions you mention above, and the dish hasn't suffered a bit. I've got a vegan version as well, which A&M were kind enough to feature in a NYT piece a while back: http://www.nytimes.com/interactive/2010/10/10/magazine/potluck-recipes.html?ref=magazine#/borrachos-12/ Cheers, and enjoy the rest of your long weekend!

Jestei September 5, 2011
thanks for writing this!