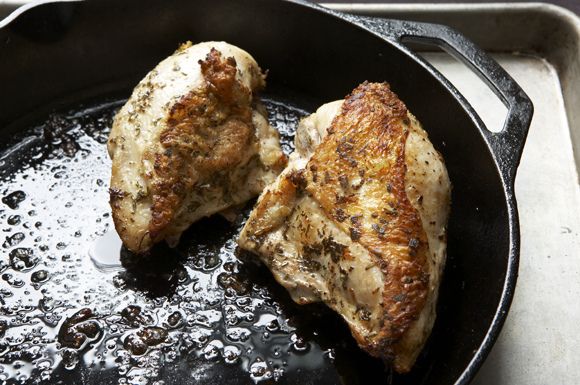 The universe may be telling you that grilling season is ending. It could be in the lavender suddenly streaking the sky at night, or the chill that is oddly in the air at 6 PM. Maybe it’s the slip ‘n slide rotting in the back yard. Or the onset of fall illnesses, for which you walk to the CVS for children’s Tylenol and some bubble bath, the latter of which you can’t find so you buy $20 wrinkle cream instead, and step on the corpse of a cicada on the way home.

But do not listen to the universe until you have made Finger-Lickin’ Finger Lakes Chicken. This recipe is about the best thing I can think to do with a bone-in chicken breast, and most of the work is done for you while you sleep or sit at work, wondering what you’re supposed to think about Burma (or is it Myanmar?) and why that guy who always wears checked shirts feels compelled to microwave his fish for lunch.

This is one of those recipes that one might read and say “Really?” a few times. Like when you realize you need an entire cup of grapeseed oil. Ditto for the Champagne vinegar. For the life of me, I do not understand why I make the lovely aioli, then put away half of it for future use. (I dutifully doubled this recipe, so I could offer four breasts to the neighbor night, but used only a cup-and-a-half of the oil and vinegar while doubling everything else.)

I cut up the rest of my herbs left in the garden (again! universe!) which meant lots of oregano and sage, a fair amount of thyme and not much rosemary. Any combination you have should work well and be liberal with your herbs.

Whipping this up takes about five minutes, then into the fridge the chicken breasts go for their 8-hour nap amongst the raw eggs.

When you get home, take your chicken out for 15 minutes or so while you fire up the grill, and put up some broccoli or mix up a salad while your chicken cooks. I know wssmom says to cook the chicken 15 to 20 minutes, but our bad boys were raw in the middle after 20 minutes, so my husband flipped them at that point and let them cook another five minutes bone up, before turning them once more to brown for another five.

These breasts are uncommonly juicy and extremely flavorful, both smoky and tangy, but not in that pucker way you might have figured. We ate it hot, but this chicken is mighty fine cold, too. Even though it rained in Brooklyn the day the Food52 crew shot this, causing them to pan roast the dish in the oven, my view is that this dish should not be replicated off the grill. So make it before the bathing suits and sunscreen are swapped out for scarves and earmuffs in the hall closet. I suspect you will want to do so twice.

Like Jenny? Read on as she wrangles beans, whoopie pies, and beyond.

ejm September 16, 2011
Deanna 1001, I too am grill less and love this marinade - so yesterday I combined this with Amandas Chicken under a Brick - with all the oil it browned up very fast, even with low heat, so to finish it I turned it over and popped it in the oven for a bit - not as great as on the grill but an acceptable alternative.

A version of this marinade is used at a famous local firehouse summer fundraiser where I am from (Eastern Long Island) and this is really great to have as an alternative.

deanna1001 September 16, 2011
Sounds like an interesting technique for this - I'm going to experiment with half roasting, half broiling and see how that works out. (I love that brick recipe also!) And next time I visit a friend with a grill, will do it as per recipe so I can compare.

Thanks for weighing in.

deanna1001 September 13, 2011
When I had a house I grilled year round. I have pictures of burgers on the grill level with the snow! But now I'm only a metro cook without a grill. Wondering - would broiling work better than pan roasting? Isn't a broiler just an upside down grill? (I keep telling myself that as I gingerly put cedar planks and other items not usually associated with apartment cooking in there...)

Jestei September 14, 2011
i hope amanda et al weigh in here because i did not try it this way

boulangere September 12, 2011
I remember how great this sounded when she posted it. Thanks for the nudge. Hope the children feel better. Poor cicada.

drbabs September 12, 2011
I've been meaning to try this. Thanks for the reminder.

wssmom September 12, 2011
Haha "step on the corpse of a cicada" I always LOVE this column (and glad you liked the chicken!!)

Jestei September 13, 2011
thanks so much for posting this recipe it is such a winner and as you can see has lots of fans

EmilyC September 12, 2011
I've had my eye on this recipe for a long time. That picture just sealed the deal...must try this soon!

inpatskitchen September 12, 2011
I made this shortly after wssmom posted it with a couple of minor changes...I did a whole chicken halved and because of my fear of underdone chicken, threw it in the oven after grilling for about 20 minutes. A truly remarkable recipe!!
And I agree with aargersi...even here in Michigan we grill year round!

Jestei September 13, 2011
yes my husband has been known to stand outside in a full parka

aargersi September 12, 2011
This really is the BEST grilled chicken you will ever eat. We have been making it all summer since testing and it never disappoints ....

And here we have, oh, 4 more months left in real grilling season plus those couple of months where grilling is not out of the question if one is just slightly hard-headed about it