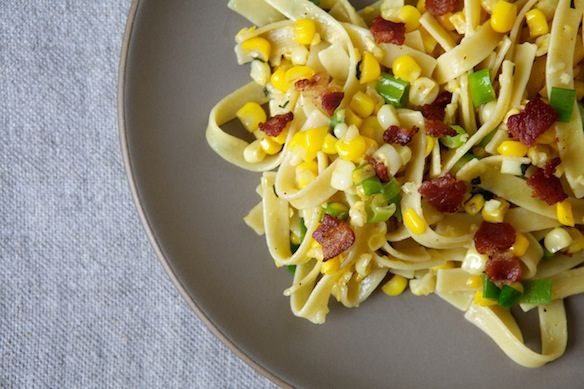 Me: “It’s not that big a deal. Just use the paring knife.”

Husband: “I just don’t feel that corn milking is something you should be asking people to do during the week.”

Do you have conversations like this? Some helpers need help to help, that’s just the way it goes in the kitchen. Don’t be worked up about all of this when you take on Buttered Corn and Noodles because it really is not that much trouble, and as we move more deeply into fall, and your basil begins to look like little green tears out there on the porch, and the corn finally disappears from the markets, you’ll want to use frozen corn for this meal and there will be no milking involved.

So, what we have here friends, is a lot of carbs and a lot of fat, perked up with some more fat, and a few delightful herbs. We’re talking about egg noodles, for which you should put on your water right away, because, if you have a helper shucking your corn and taking it off the cob (then taking the little bits and corn milk off with the butt of your knife as aargersi explains) this dish will be ready in no time.

Crisp up your bacon first (my large cast iron was a good skillet for this dish), then get the corn going in the slick of bacon fat that you have left behind and the butter, as your new lardons take a paper towel nap. Watch your heat: I had to kick it down a notch as the corn started to brown up. As it so happened, my husband put the milk right in with the corn bits, so it all went into the pan together, which was fine.

At this point the noodles went into their bath of boiling water and indeed six minutes later, as instructed, they were ready to be drained and join their corn friends in the skillet. Next do your herbs (may I use this opportunity once again to extol the joys of marjoram which really never seems to get its due even though basil is constantly being tarted around the town in every recipe I have) and some salt and pepper. Throw on your scallions (a nice touch but if you don’t have any, don’t worry; some sautéed shallots would be a great choice here, too) and the lemon zest.

Total time: roughly 15 minutes. Now take your bowl and go watch “Ferris Bueller’s Day Off.” I suggest a run the next morning.

Buttered Corn and Noodles by aargersi

Like Jenny? Read how she rustled up the end of her garden for Finger-Lickin' Finger Lakes Chicken last week.

BiCoastalCook September 25, 2011
I think I'm just going to make the sauce and ignore the noodles! Surely that cuts out enough calories so I only have to sweat for one hour the next morning instead of two. The recipe is wonderful but Jenny's intro makes it even more so. Thanks to both of you! PS we still have corn here in Central Coast California...

mcs3000 September 20, 2011
So good! Couldn't resist adding the bacon even though it's Meatless Monday.

AntoniaJames September 19, 2011
I've been saying all summer, in comments here on food52 every chance I can get, how marjoram is corn's best friend. In fact, if a recipe calling for corn also calls for basil, I routinely add marjoram or use marjoram instead. (Marjoram also does well stuffed under the skin of a chicken before roasting it.) I now have two marjoram plants, because I was constantly depleting the single one I had at the beginning of the summer. Glad to see marjoram getting some love here, too. Corn + marjoram + bacon + butter + egg noodles = delightfully decadent. ;o)

Bevi September 19, 2011
I made this when aargersi first published the recipe. It was a huge hit - carbs be damned! It is complete comfort food, and has the perfect combination of flavors. Thanks for showcasing this, Jenny. A quick trip to Trader Joe's will get you canned corn (in the same packaging since Day 1) or frozen kernels, so I figure I will be making this all year. I am thinking of putting it on one holiday menu just because. My dad and mom will like the Amishy flavors.

Jestei September 23, 2011
i feel fine about frozen corn. canned too in some instances. i can't stand to be without all winter.

Nicole F. September 19, 2011
While shooting this lovely pasta dish, after I was lucky enough to try it :) I really loved it! A must try for sure.

Midge September 19, 2011
I've made this three times now and can't wait for the fourth. It definitely puts extra spring in your step on your morning run!

aargersi September 19, 2011
Reading this certainly makes me smile! And yes, an extra mile (or two) the next morning is well advised.

susymac September 19, 2011
We don't get good old corn on the cob over here in the Netherlands...but i'm sure this dish will be just as good with corn from a tin (if i close my eyes really tight and dream of peaches and cream corn from Quebec where i grew up)!....sounds soooo easy and yummie! I think i'll make this...or some bland Dutch version of it this week!

Jestei September 19, 2011
i would say do some sauteed shallots to perk it up. and bacon solves the rest of your problems. work with what you're got. it won't be bland at all i bet!

Burnt O. September 19, 2011
PERFECT timing! Thank you! My neighbors gifted me with fresh corn from the Farmer's Market yesterday. Picked on the Eastern Shore of MD in the early hours of yesterday morning. Guess what's for dinner tonight!! Bravo.