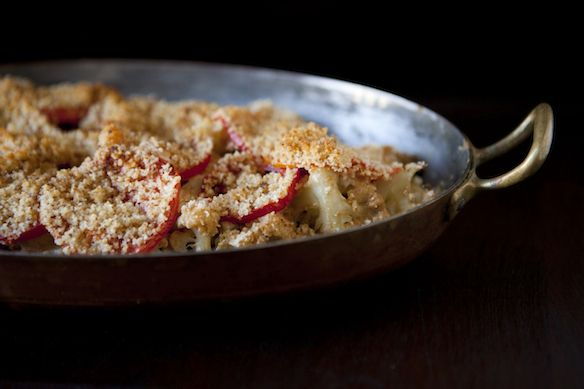 So friends, in the category of cooking-as-life-metaphor, my Rustic Cauliflower Bake was one hot white mess, a Mad Men conjurer with a farm-to-table prescience, a decadent rapscallion with a virtuous soul.  In short, it is a dish you should consider inviting for Thanksgiving.

We begin with the grim reality that cutting cauliflower is a pill. I am inclined less toward trimming than whacking at it like an unwelcome weed. As your friend, I can’t help but encourage you to get one of the those cream colored lovelies from the market at this time of year, but as your partner in week night sanity, I encourage you to get someone else to cut it up.

As that petulant brassica oleracea steamed away in my chicken stock and water, I mixed up my cheeses, sour cream and spices, skipping the garlic powder simply because I had none. (Had I given it proper consideration, I would have softened some fresh garlic in olive oil, which would be a fine addition to this dish. Think about it.)

Here is where it all came together: I didn’t even drain that cauliflower, because there was just a tad of liquid left in my pan (but no I did not overcook it and nor should you). I didn’t so much mix it with my creamy spices as dump that stuff on top and give it a stir. I used cheap cheddar from Trader Joe’s, nothing-special sour cream and some whatever bread crumbs BUT also the last of the tiny red and yellow tomatoes from the market, sliced up so gently, and then all topped with some ambrosial Spanish paprika I picked up over spring break in Miami.

High and low, babies, just as we like it.

I cooked it until it smelled good, which was around the 35 minutes ashley_samuel_pierson called for.

What is amazing about this dish is that unlike the veggies in so many nostalgic casseroles, the cauliflower maintains just enough firmness to gently resist your bite, while the cream mix melts around in submission, the paprika landing a fragrant final punch. I can’t say this dish will be the most beautiful at your table , but it will be among the more welcome. As you serve it, ask your guests to tell a story about their worst job ever. Dig in.

ashleychasesdinner November 15, 2011
Thanks Jenny! I completely missed out on your highlight of this recipe. I love all the suggestions and have to say that my mission over the past year to use all fresh ingredients ( pass on the processed), I too would use fresh garlic in olive oil. I haven't made this in some time, but with all the great suggestions, it may be time to make again!
I love your writing Jenny! Thanks again! Gorgeous photo Nicole!!

buchanantr November 1, 2011
I interpreted to mean dry mustard and used just 2 teaspoons (v tablespoons) and it was still too tangy for my taste. Next time I'll reduce to one t. unless I see better wisdom from the creator! Cauliflower has finally re-emerged from my childhood bias but I haven't been able to bring the rest of the family along.

TheWimpyVegetarian October 29, 2011
And I want to add - what a gorgeous, gorgeous photo, Nicole!!! Really just beautiful!

TheWimpyVegetarian October 29, 2011
When this wonderful recipe was first posted, I had bookmarked it to try. And then got distracted by the continuing flow of great dishes to try on this site. Thanks for choosing this to write about so I could be reminded of it. I decided on the spur of the moment that I HAD to make this tonight, but was missing a few things (thanks to bad planning) but it was still just fabulous. GREAT recipe, Ashley!!!

mariaraynal October 25, 2011
Petulant cauliflower: I will keep it away from the angry brussells sprouts in my fridge. Gotta keep those veggies in line. Delightful recipe.
Author Comment

rbcowgirl October 25, 2011
How do you save a recipe in this new format? I have looked all over.

MrsWheelbarrow October 25, 2011
I believe there is a cauliflower fan in this house who will adore this recipe.
Author Comment

kxr173 October 24, 2011
I just made this & it was quite delicious! I used greek yogurt in place of the sour cream and also used a mix of gruyere and sharp cheddar cheeses, since they are what I had on hand. It doesn't look as ugly as I thought and it tastes quite good! The mixture reminds me of a homemade mac & cheese type "sauce". Nice twist on cauliflower, great this time of year!
Author Comment

Jestei October 24, 2011
those are great additions. i think sharp cheese would be nice and tangy with the paprika

Sarah P. October 24, 2011
Am making this tonight with cut up frozen cauli. I'll let you know how it turns out!
Author Comment

Jestei October 24, 2011
please tell us; does that shorten cooking time i wonder

Sarah P. October 25, 2011
Ended up using fresh cauli, had to stop by the store for wine of course! I have to say, the sour cream made it taste a little to sour for me, or maybe it was the worsch. sauce, not sure. I added some shredded parm which was tastey though! Used olive oil instead of butter for the crumbs, and added some parm to them also. Forgot to add the tomatoes after I had already put the breadcrumbs on, so I just put them on top, which made them nice and toasty. I'll post a pic!

tota October 24, 2011
I don't see an icon for saving this recipe. Am I totally lost on your new site?

bibbs October 24, 2011
I had the same question - click on the picture of the dish at the top and it will take you to the recipe page. The icon to save is on the left.

Sherrywine October 25, 2011
Trying to save and don't see a picture of a dish at top of page. Am I looking in the wrong place?

drbabs October 26, 2011
It's a glitch. you should be able to click on "Rustic Cauliflower Bake" in teh first paragraph, which should take you to the recipe where there should be a save button. It doesn't do that, so it's proably something the hard working Food52 elves are working on. For now, here it is:
http://food52.com/recipes/7048_rustic_cauliflower_bake

Lizthechef October 24, 2011
Cut the cauliflower in half, then cut out the large core. Trim the stems a bit and, voilá, your cauliflower is ready to go...

China M. October 24, 2011
In addendum, to cut the cauliflower into neat florets, cut from the bottom; gently wedge your knife into the de-cored base, then let the florets naturally split. This way, you won't wind up with lots of cauliflower shavings.

China M. October 24, 2011
In addendum, to cut the cauliflower into neat florets, cut from the bottom; gently wedge your knife into the de-cored base, then let the florets naturally split. This way, you won't wind up with lots of cauliflower shavings.

wssmom October 24, 2011
LOL I prepared this just the other night; delighted you enjoyed it as well.