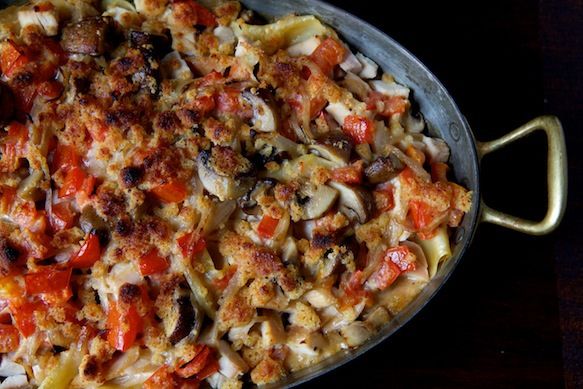 Here are a few culinary givens in my house during the holidays:

1. The piles of cookies, candy and fudge that I fantasize for weeks about baking and placing in decorative homemade bags finished with some scalloped edges will all come together in a far more modest form, popped into sloppily-put-together plain white boxes because in fact I have no skill for making pretty containers. None at all.

2. Someone will request potatoes and I will once again attempt a recipe that takes 20 minutes longer than I have time for and requires slices a little thinner than I made and at some point mid-dish I will realize once again that I never had the skill for layered potato dishes and I will either start weeping or order a pizza.

3. I will have lots of leftover turkey.

Although we were a mere nine people on Thanksgiving -- five of them children -- my husband requested that I make no less than 17 pounds of poultry, because among his most favored dishes in the world is a cold turkey sandwich on white bread with some mayonnaise, salt and pepper.

But obviously I had far more bird left than needed for those sack lunches, and so for my leftovers party the day after Thanksgiving (really fun, I especially liked the half-eaten pecan pie, and the single turkey breast rolled with spinach) I decided to try Turkey Tetrazzini.

Some old school dishes get left in the archives for a reason, but I surely do support any tetrazzini resurrections, and particularly QueenOfGreen's version, which she proclaims is her favorite post-holiday dish.

Let’s begin with noodle flexibility, because you have it here. I went for egg noodles. While those are cooking up, you do your shallots and then shroomies in some butter and olive oil. Oh my, your kitchen smells good. Maybe you should turn up the music.

I used sherry to scrape up my bits, as I do not own vermouth. I might remedy that at some point.

Next you do your flour thing, with the cream, and please be careful to keep stirring. I think I was out of nutmeg and did the slightest tiny dash of mace. I said it was tiny so don’t focus on that okay?

The tomatoes here are key, and what differentiate this dish from others I have had. I bought some cherry versions that came from, well, I want to say Florida,  which is the best I could do this time of year. I think canned would work okay. I used turkey broth from my carcass but chicken would work fine.

Don’t you love layering casseroles? It feels so I-am-about-to-go-to-a-potluck-with-lots-of-wholesome-conversation-but-someone-also-might-get-drunk-and-fall-into-a-wall, doesn’t it?

Things I intend to cook one day in a galaxy far, far away

linda July 17, 2016
i like to use Swiss cheese, in addition to the Parmsean

MaryAlice November 27, 2013
Check in with James Beard about tetrazzinis.

ebanreb July 12, 2012
This recipe is fabulous! The only changes I made were halving the recipe for my husband & 2 toddlers, and it made enough for 2 meals. I also got some recipe from gourmetrecipe and gourmandia sites. Try to visit the sites and see what you can do.
Author Comment

Jestei December 11, 2011
i went to one recently where a guest barked like a dog. not a cockapoo type dog either.

JanetRoss December 6, 2011
I tried this with ground white meat turkey. It was great!
Author Comment

[email protected] December 6, 2011
My grandmother always made turkey tetrazzini with Thanksgiving leftovers and I always loved it, although this version looks even better and a lot fresher than her 50s-style version.
Author Comment

gt9 December 5, 2011
I am usually on the road when I get to read Jenny's in the kitchen. By the end of the week, while I haven't gotten the read or the dish out of my mind...sounds like Saturday supper. To bad I can't find a "home made" restaurant with TT on the menu.
Thanks.
Author Comment

Jestei December 8, 2011
i cant wait to try your other recipes.

Midge December 8, 2011
It was tasty! Might add more broth next time to make it a bit saucier.
Author Comment

aargersi December 5, 2011
Sounds delish! We have a couple more of those potlucks in our near future, and we will hope for drunks and walls colliding (as long as it's not me!!)