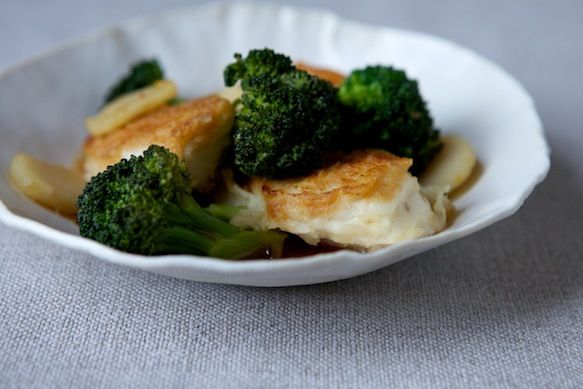 After our Christmas dinner at a Chinese restaurant in Arlington, my husband proclaimed, “There is really excellent Chinese food, and then there is everything else.” Apparently, our duck and ginger noodles fell into the latter category. A meal I had a few days later at Szechuan Gourmet in Manhattan fell into the former category.

And then, there is orange chicken. This dish has long been a favorite of my kids, who have religiously ordered it everywhere from Panda Express at the Tyson’s Corner mall food court (No judgment! I almost start crying every time! But there is a good Indian take out place there. Just sayin’.) to pretty much every Chinese restaurant where it has been available between Washington and Los Angeles.

I began to wonder if this is a dish that can be emulated at home.

According to my exhaustive internet research ten minutes ago, orange chicken -- essentially fried chunks of chicken in a slightly gloppy orange sauce -- is a made-in-America Chinese dish, similar to General Tso’s chicken. Both translate from Chinese as basically "old peel chicken" because the sauces uses citrus peel.

For my first home attempt, I made a modified version of Take Out Orange Chicken - IN.

I confess when I first saw the list of ingredients, I wondered if this was really a weeknight dish. But the truth is, you’re making a pretty simple boiling sauce, frying up a little chicken, which gets finished in the oven and dumped into the sauce. I skipped the vegetable, water chestnuts and garnish components, just to speed it along.

For the chicken, I used two large boneless breasts from my farmer guy, fresh and lovely, chopped into even pieces. This recipe gave me a chance to revisit rice flour, purchased for a fish frying attempt several months ago. I love how evenly and nicely it coats protein, how evenly it fries, with none of the glopping and burning I sometimes get with regular flour.

Once your chicken is lightly fried and headed for the oven, turn your attention to the sauce.  The smell of the boiling orange peel, juice, ginger and soy sauce is pleasantly familiar. Some of you will no doubt be offended by the corn starch used to thicken this sauce, but it really is what makes it authentically Chinese takeout-ish.

Once my chicken was cooked through, I tossed it into the sauce with some steamed broccoli, for the crunch and color.  As you read the rest of the recipe, you will see that I skipped basically the whole second half.

My kids proclaimed this version, which all told took about 30 minutes, “as good as the restaurant kind and a little spicy.” This is probably because of the fresh ginger, which I assume does not make an appearance at the mall.

So in conclusion: Orange chicken. It’s not for everyone. But if you’re a fan, this is a very good home version, and I assume a good deal healthier than the takeout version, too.

Take Out Orange Chicken - IN by inpatskitchen

TastefullyKimS January 12, 2012
I have a fascination with orange chicken lol, can't wait to try it. What's this about an Indian Place in Tysons Corner?

HeatherM January 10, 2012
Wait, there's an Indian place in the Tysons Corner mall I should be visiting on my lunch break?! (Fact: Tysons Corner does not have an apostrophe.)

BlueKaleRoad January 5, 2012
Delicious! I was just thinking about Chinese recipes to make at home - perfect timing! Thank you for sharing this one.
Author Comment

Kitchen B. January 5, 2012
Oh yes. Thanks Jenny! And I have a bag of rice flour waiting in the deep freezer for me (I do remember Paul Josephs Wonderful Fish recipe, which I tried, thanks to you). Have a brilliant 2012, keep unearthing these great recipes.
Author Comment

Jestei January 5, 2012
that was the recipe! should i have been freezing my rice flour?!?!

Kitchen B. January 6, 2012
No Jenny, you shouldn't be freezing your rice flour! I tend to keep all my flours, nuts and grains in my super large deep freezer so I can keep them from going rancid, avoid the weevils and make space for other things on the shelves :-). So, don't worry......planning on making this over the weekend. Thanks

luvcookbooks January 4, 2012
luv orange chicken and now can make it at home! thanks for the recipe, jestei and pat!
Author Comment

pierino January 2, 2012
I really like this. Recently I worked with my ace team of cooks to make a Chinese take out style menu for about 25 people. Wish I had thought of this. For further reading. Check out The Fortune Cookie Chronicles by Jennifer 8. Lee. That's really her name.

inpatskitchen January 2, 2012
Thanks pierino! did the same thing once for a large friend and family gathering.....Orange Chicken, ABC, Sweet and Sour Pork, Beef and Broccoli, Mussels in Black Bean Sauce, Egg Rolls.. right down to store bought Fortune Cookies and Sherbet!! Everyone loved it!! Oh.. and Egg Drop Soup!
Author Comment

Jestei January 3, 2012
i know jenny she used to be a colleague i know of the book but have not read it. what other food did your crew make?

pierino January 5, 2012
Let's see, we made pork won ton soup, tomato egg flour soup, thai chicken skewers (okay, that one was off the reservation), steamed rice, and like Pat, store bought fortune cookies. And by the way the worst job in the world I've ever witnessed was some Chinese guy on a bicycle delivering during a blizzard on New York's Lower East Side. Probably to a sixth floor walk up.

inpatskitchen January 2, 2012
So happy your kids liked this!! And the picture is beautiful!! Thank you for trying it.
Author Comment

mrslarkin January 2, 2012
This sounds fab and will have to try it soon. Wonder if we could turn this into Orange Beef by subbing beef for chicken? We had Christmas dinner at Chinese resto per Sconegirl's request. It was delicious. We made the hostess real nervous when we showed up without reservations. It was pretty funny.
Author Comment

Jestei January 3, 2012
I confess I have never tried to fry beef but maybe Pat could weigh in here?

Kitchen B. January 5, 2012
It does sound delicious and is now on my list of things to try this weekend! According to Wikipedia and Google, there is a popular beef version called Tangerine peel beef. See ://www.google.co.uk/search?hl=en&source=hp&q=tangerine+peel+beef&gbv=2&oq=tangerine+peel+beef&aq=f&aqi=&aql=&gs_sm=e&gs_upl=379l5663l0l6210l17l12l0l0l0l0l0l0ll0l0

Jestei January 3, 2012
I just had that dish for the first time on my trip to NY and I would LOVE to try it at home. Will look up Monkeymom

healthierkitchen January 12, 2012
very easy to make and delicious! I usually steam a huge batch of broccoli to add in.

Jestei January 3, 2012
same to you drbabs and can't wait to cook more of yours!
Author Comment

Jestei January 3, 2012
same to you drbabs and can't wait to cook more of yours!

Bevi January 2, 2012
This is perfect CNY food - thanks Jennie and Pat!
Author Comment