We've neatly condensed the recipes below, but to read the fully fleshed-out versions (and save and print them) just click on the recipe link or photos. A colorful supper in under an hour -- dinner is served! 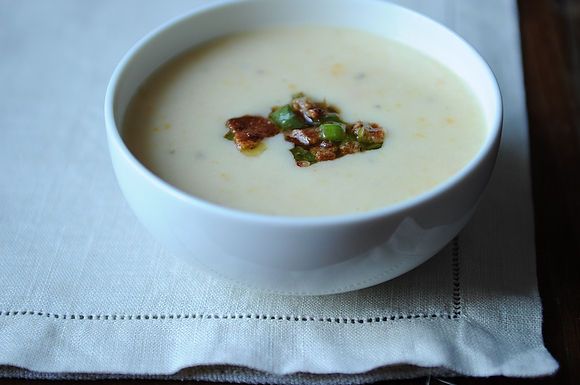 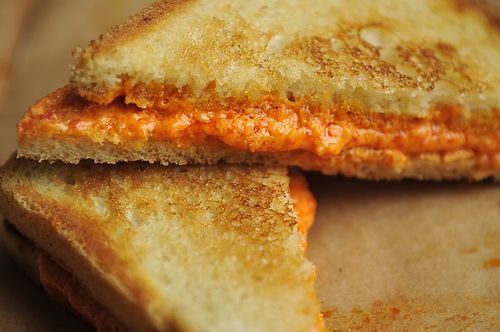 We're assuming that you have olive oil, butter, onions, vinegar, garlic, celery, carrots, mayonnaise, salt, pepper, and sandwich bread on hand -- if not, it's time to stock up!

Potatoes First: Since the potatoes will need to boil for 20 minutes, get that going first. Saute celery, carrots, rosemary, garlic and onions in butter (about 10 minutes) and then toss in the cubed russets and 7 cups of broth (water is ok too) and bring to a boil, and then a simmer. Ignore for 20 minutes.

Whizzed Cheese: It makes sense to get the cheese filling ready now, because it's forgiving and doesn't mind sitting for a while. Break the cheddar into chunks and process until it is reminiscent of coarse gravel. Now add the peppers, garlic and mayonnaise and process until the mixture is smooth and spreadable. At this point you could pop it in the fridge for a while, or, since you're going to use it pretty immediately, just let it sit in the food processor.

Still Simmering: Unless your food processor is terribly slow, your potatoes should still need some simmering time at this point, so it's a great moment to make the bacon vinaigrette. Cook the bacon until it is nicely crisped and chop into nibble-sized pieces. Stir it together with the green onions, vinegar, olive oil and salt. Set aside.

Last steps:  Assemble the sandwiches and get them in a buttered pan on medium low heat. Keep an eye on them while you pull your potatoes from the heat and toss in 1 cup of sour cream. Puree.

Sit down and eat up: As soon as the sandwiches are toasty and warm, ladle the soup into bowls and garnish the soup with the bacon vinaigrette.

Aside: Stash any leftover peppered cheese to nibble with crackers for tomorrow's lunch. You deserve it. Why? Because dinner is served.

Andreas D. May 4, 2012
One thing about pureeing potatoes - never use a food processor for this, instead use a ricer or a food mill.

Potatoes are rich in starch, in a food processor this starch is quick and violently released, turning the potatoes into little more than glue.

jbirch January 14, 2012
The instructions say 7 cups broth but I don't see it in the ingredients. Is this chicken broth?

sianbum January 9, 2012
Made the soup and sandwiches tonight and they were both out of this world. I would say that the serving size on the sandwich is misleading. It says serves 1 (with extra cheese), but we yielded two sandwiches plus at least another two sandwiches worth of spread. Worth noting if you're wondering if you can halve the recipe.

AmyRuth January 8, 2012
Okay.... I'm guess we know longer have the ability to add recipes to Grocery Zen AP I know you're thinking "where has she been the last few months?" woops just didn't notice. If I'm missing something please clue me in. he he Thanks

greathill January 5, 2012
okay, forgive me. I'm still not used to the new format (I haven't been on here for awhile). I see the recipe link on the left. duh. thanks!

Kristen M. January 5, 2012
You bring up a good point, greathill -- we're still figuring out the most helpful way to assemble these posts. We'll keep working on it, but for now you'll probably want to reference the full recipes to get amounts.

greathill January 5, 2012
Hi there - saw this on twitter and printed it out immediately but I'm sitting here reviewing it and I need more specifics. are we to assume everything is to taste? for example, with the vinaigrette it says to stir the bacon with the vinegar and olive oil but I don't see how much vinegar and oil to use. And how much mayo do I add to the whizzed cheese? Am I missing a link that offers more specifics?