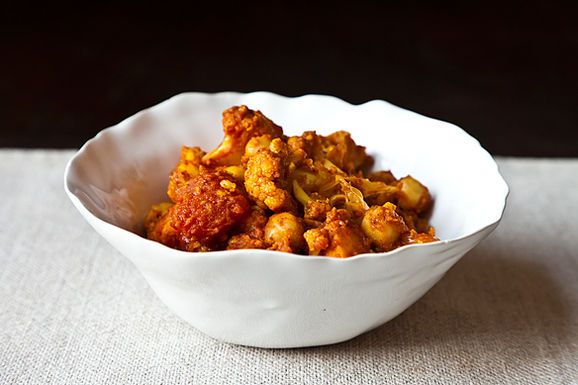 When I was 25 years old and living in my Manhattan apartment with the bath tub in the kitchen – long before I could even properly soft-boil an egg – I met a guy at a dance party whom I decided would be my next boyfriend, and thus I invited him to my apartment for dinner.

I had no friends who actually made dinner, so I had no recipes. Nor for that matter, did I have a pan. (I borrowed one from the chain-smoking neighbor who I never saw out of a housecoat). But I remembered that someone I shared a house with once in Minneapolis made a delicious vegetable stir fry, and so I figured that is what one should make.

This is when I learned one of the many lessons that would follow me through my still-developing life and culinary education – a well-cooked mélange of vegetables is actually much harder to achieve than a perfectly cooked steak.

I had no idea how to soften an onion, nor when to add which vegetable, and the mere notion of seasonings like the fish sauce or whatever the housemate used to make his stir-fry eluded me.

Need I tell you that after that plate of half-raw onions served over a bed of undercooked brown rice, all of it the consistency of so many dung beetles in the grass, I was not called again by my young suitor?

I doubt that at our tender age and stages of relative poverty that this man was looking for a housewife, and I had failed to show off the needed skills. Rather, I had been rejected, quite rightly, for not having the consideration to know that I could not properly nourish another, and arrogantly went about pretending to wing it, a precursor of the damage to come.

Also, I could not dance.

I have not thought of whatshisname in years, but I did recall that ill-fated “meal” in the middle of cooking Warm Vegetable Curry.

First of all, friends, you need a large pan for this. I am talking 15 inches, or alternatively, a nice deep dutch oven.

My 12-inch cast iron could not contain these veggies, and you know that crowding leads to steaming, which is a bad bad thing. I skipped the chick peas, a very sad and lamented loss, because I did not have room in the pan. Don’t do that.

To save some time, and because the cauliflower heads at my store were looking sad and discolored, I went ahead and bought pre-cut. Many will frown at this, but I look the other way at pre-cut veggies from time to time, because it does speed one’s weeknight cooking. I also used a can of diced tomatoes, drained a bit, instead of a tomato, to avoid feeling sad.

You can more or less chop as you go, as long as you have all your spices at the mise. My curry powder happens to be quite spicy; if yours is mild you might want to up your spices a bit to give a little more flavor. Use your salt as needed. Watch your pan, and stir.

This is one of those dishes that is nice to make on a Sunday night, but especially if you have something else to eat for dinner, so that you can have a meal and a sack lunch or two, because the flavors of this dish develop and deepen as the week goes on. With the chick peas, this is a hearty and flavorful dish that is ideal for your meatless Monday. It’s not quite fancy enough for a suitor, but a nice reward for someone who is old enough to have learned to properly pay attention to her vegetables.

Melissa February 12, 2012
I made this last week; finished the batch yesterday. I will make another batch today. I added fresh goat cheese instead of the yogurt. The complexities of these spices are sublime and when mixed the texture of the goat cheese completes it for me.

BlueKaleRoad February 7, 2012
Your story brings back memories of me trying to pull off a fancy, grown-up Valentine's Day dinner for my boyfriend in college - I had an image of what the meal would be and it didn't come close...ah well, we still got married (after I'd learned to cook!).

I like the inclusion of sweet potatoes here for extra flavor and color. Thank you for sharing!

Jestei February 8, 2012
I loved the sweet potatoes. They made the dish I thought!

violist February 7, 2012
I love this recipe. I would suggest rinsing the chickpeas after draining them. Once in a while, depending on the brand, canned chickpeas can have a somewhat metallic or off taste, which goes away with rinsing.
Author Comment

Jestei February 7, 2012
my husband the copy editor did NOT approve

mariaraynal February 7, 2012
Not a copy editor but fully approve. And I too cannot dance.
Author Comment

Jestei February 7, 2012
well, i should clarify, he is ONLY the copy editor of this blog. he is otherwise just a good reporter who also happens to be a great copy editor. tho i defy him. hope you like this recipe maria!

Bevi February 7, 2012
You can consider "at the mise" a stolen phrase from this point onward. Copy ed vet or no vet.

drbabs February 6, 2012
Yum. Yum. Yum. Made this tonight! Wthout cauliflower-- I didn't have any--and minus the curry powder (my husband doesn't eat curry), so I added more cinnamon and some clove and allspice. Also, I used fresh chickpeas because I had just cooked a bunch. It was great! So happy you shared this, and that you learned to cook!
Author Comment

Jestei February 7, 2012
interesting. a real change to the dish but the spirit in tact. i will try it like that sometime!

laurenporat February 6, 2012
Looks so yummy! Any suggestions on a substitute for the yogurt to make it vegan?

Panfusine February 6, 2012
you could soak & grind up some cashew nuts to a creamy paste to substitute for the yogurt.

Kristen M. February 6, 2012
It's just a garnish, so you could skip it (we ate plenty of this without any garnish). But you could also consider a swirl of unsweetened coconut cream.