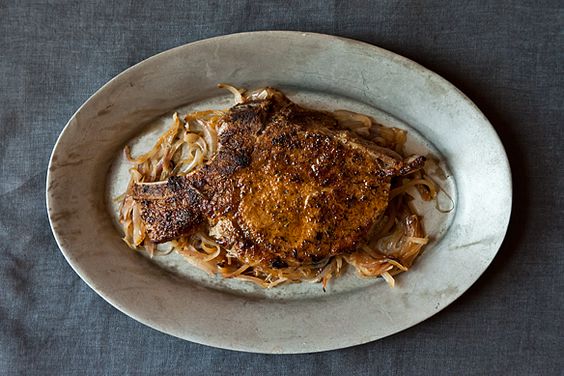 Let me start by saying I do not advocate a 10pm dinner. It is, among other things, an unpleasant thing to have to clean up, when you’d rather be watching Modern Family on the DVR or contemplating the best outcome of the payroll tax fight. But should such a thing be happening in your life, let me raise the possibility of Paprika Pork Chop.

I made a few modifications to this recipe, starting with my bone-in chop, which was not center cut, because the butcher said this does not exist, which I am not certain is true. But this isn’t about him. The key point here is that you want a chop with a bone, about an inch thick.

Not owning a white onion, I went with yellow, and I substituted both the hot paprika and chili powder with an equal amount of Spanish paprika, because I was not in the mood for heat. While your spice rub is sitting on the chops all pretty, get your side going (orzo tonight) and start sautéing those onions. I love when onions start to get soft – it is like the poking up of a crocus, promising something better than whatever happened today.

I pushed my onions to the side of the cast iron pan, and cooked the chops exactly five minutes on each side, using an oven timer so as not to overcook and also to see if that was the proper amount on the stove. It was, at least after sitting another five under foil as instructed.

This was a big hunk of meat, people, and staring at it and feeling a little Fred Flintstone about the whole thing, I suddenly didn’t even feel like eating any orzo. Instead, I simply quietly cut away at my chop, while my husband and I, both exhausted from our various tasks in the broader world that day, could barely mumble at one another about whether or not we had signed up for some event at school, and really wasn’t it so and so’s turn anyway?

Then, we put a little hot water in the pan – because that is truly the only dirty dish you’re making here – ate a blood orange each, and stumbled off to bed.

JodiesLittleStore February 21, 2012
This sounds so delicious. I can't wait until 10pm tomorrow night!

supereric February 20, 2012
I've probably eaten more pork chops in my life than anyone I've ever met (ate two yesterday). I'm not saying anyone in the world because there is probably some soul out there who has eaten more. But I haven't had them quite like this. Thanks for a wonderful recipe that's even more wonderfully written.

stephenzr February 15, 2012
I no this looks good! We'll make it this weekend. I'm wondering if sweet paprika would be just as good?

Kristen M. February 15, 2012
I think sweet or smoked would be great.
Author Comment

Jestei February 15, 2012
agreed. i think any paprika would work

Jestei February 15, 2012
I hope you both try it and enjoy. Super easy and tasty.

mcs3000 February 15, 2012
I hope you get some much-deserved time off! I do love your byline. When I work late, sometimes I want more than cereal. I'll try out this recipe on one of those nights.
Author Comment

Jestei February 15, 2012
why thank you. if you become a US senator, pls see to that. hope you enjoy the chop

MartyM February 14, 2012
Great story to go with the recipe. This looks like just the pork chop recipe I have been searching for. (I have never found one I wanted to make more than once.)
Author Comment

Jestei February 15, 2012
really? amanda has a few other good pork chop recipes. bring on the sage!

amysarah February 14, 2012
How funny - I was just talking with a friend about the prevalence of chops when were kids - lamb and pork, veal came later. Chops still happen, but not so much in the regular rotation. And exactly, re: garlic powder - same with Lowry's and 'Gravy Master'. I think my mom still has the remnants of a bottle from 1977.

Jenny, odd about center cut chops 'not existing' - my market always has them. Have I been hallucinating?

Jestei February 15, 2012
so the butcher claimed bone in cuts are not center cut. i am not sure i believed him.
Author Comment

Jestei February 15, 2012
so the butcher claimed bone in cuts are not center cut. i am not sure i believed him.

amysarah February 15, 2012
The center cut chops at my market are on the bone - unless marked boneless. I always thought it just meant cut from the center, meaty part of the loin. Anyway, could you doubt a website called porkchops.com? http://www.porkchops.com/chops.htm (possibly best name for a site ever.)