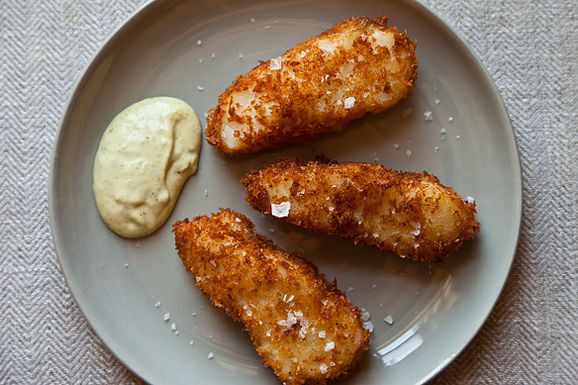 So I need to share some feelings with all of you concerning weeknight cooking. For the last few years, I have been combing this site, popping “chicken breast” or “Domaine de Canton” into the recipe search function, and coming up with stuff, much of it gathering panko dust in the archives, to share with you. We’ve had our hits and misses together, but how high the highs! Butter chicken! Filet of sole! Salmon pasta!

But lately, the FOOD52 folks have been nosing around, making all sorts of inferences and suggestions, all in the name of, I don’t know, efficiency and good taste or something. How about this? What about that? I confess I felt crowded, even a tiny bit misunderstood. After all this time, don’t they understand, Jenny doesn’t make carrot soufflé?!

But after standing in line at Whole Foods on a Sunday night, where I grumbled to myself about the people who stare straight ahead, apparently unseeing, as they push their carts into the ankles and baskets of others, then coming home and feeling all dictated-to, I had to sheepishly admit that Lime and Tarragon Aioli with Panko-Crusted Fish Sticks was a pretty find.

First I will tell you that on a Sunday night, after two birthday parties – one of which, DC-style, could only be reached via a long and pothole-filled drive along Military Road (which if you don’t live here means nothing, but trust me it is the driving equivalent of being nibbled by Tsetse flies) – and a fairly dramatic meltdown over which song from “Once Upon A Mattress” is most suitable for the play tryout, I just could not bring myself to pull out a blender.

So commercial mayo it was, doctored with the lime zest and juice and tarragon and a dose of salt and pepper. The mayo, now citrus-infused and the color of young pea shoots, was a burst of spring in a monkey dish.

For the fish, I chose cod, because as much as I love my family, no one gets $27-a-pound fish sticks in this house.  Plus, with the sea bass option, you’d be pulling off some skin. I didn’t try to make lovely, symmetrical sticks, but rather cut the fish in nice, even chunks, dipped them in the egg and panko and -- voila -- into the pan of sizzling grape seed oil they went, to be turned a minute or two later, golden brown and crispy.

I set them down on everyone’s plate, and announced, “So listen I need some feedback……..” WHOMP. Those fish sticks were gone, people. G-O-N-E. And everyone was mad there were not more. I gave my last bite to bacon girl. We have to admit, that sdebrango knows what she is doing. And so to the people who forced me to cook her recipe, sheepishly, I say: “Yum.”

Lime and Tarragon Aioli with Panko-Crusted Fish Sticks by sdebrango

Sandrala March 5, 2012
I don't like Tarrragon at all. Can anyone suggest a suitable substitute?

ctgal March 5, 2012
Hi Jenny. You've lit my fire. I'm craving my CSA and it's still too early so I haven't been too inspired lately. Plain old tilapia, especially if you can get it at Costco, works very well and is inexpensive. Freeze what you do not need and make fish cakes from the rest. I like the lime aioli idea. Perhaps you can take the fish sticks and stick them w/ the mayo in corn tortillas, toasted, w/ a little cut up cabbage, carrots, &, voila! fish tacos. By the way, when I met my husband on the hill in (uh oh, here it comes) 1977, he lived on Mrs. Gorton's Fish Sticks! To him, that was dining. This, I think, is a sight better! Thanks for the inspiration

webbiest March 5, 2012
Chilean sea bass is actually Patagonian toothfish and they are on track for extinction due to overfishing. PLEASE make sure yours is sustainably sourced if you use or soon nobody will be able to cook with it. http://en.wikipedia.org/wiki/Chilean_sea_bass

Equator180 March 4, 2012
A nice simple and delicious dish. Glad to see you using Cod as it is wild caught and natural product. The Chilean Sea Bass you mention is and always has been a wild caught species. Next time I am going to try Haddock with this dish, (another excellent wild caught species) Have seen a couple of comments on here that are a 180 on what they are trying...organic this and that then do the dish with Salmon! Cobia! both farmed and much like industrial chicken!

kated117 March 4, 2012
This was SO good! I had cobia, which held up perfectly. I was too lazy to make the aioli from scratch, so I just added tarragon, garlic, lime juice, and salt and pepper to mayo. I might try it with a mix of yogurt and mayo next time. I served it with a baked potato and sauteed Swiss chard with shallots Great recipe!

kated117 March 4, 2012
This was SO good! I had cobia, which held up perfectly. I was too lazy to make the aioli from scratch, so I just added tarragon, garlic, lime juice, and salt and pepper to mayo. I might try it with a mix of yogurt and mayo next time. Great recipe!

Chubknee March 4, 2012
What sides did you serve, or do you suggest, to accompany the fish sticks. I want to make it healthier by avoid the usual "chips" (fries), but I also want the side to make sense with the fried fish. Thank you

Yum! Reminds me a lot of Bon Apppetit's Panko-Crusted Halibut Fish Sticks recipe, which I love!

Emmastia March 4, 2012
A really low budget way to do this is to ask the fishmonger if they have any chowder fish, basically pieces leftover from cutting, etc. They sell them at a discount and they work great for frying.

gt9 March 3, 2012
Gosh Jenny, you can make me change my mind about a food i grew up with most Friday's and "detested" when my mom put them on my plate... needless to say Minnesota fish sticks back then were from a box...I need to rush over to my WF and pick up some fish for this. Can't wait. Thanks.

SEW February 28, 2012
Perfect! I had to smile when I read the comment by Bevi, I have sons that will say, Ok mayo is cool, Mom do you have any Heinz? As for me thank you, I'm loving cooking again.

Rhonda35 February 28, 2012
Guess what we're having for dinner tonight? These fish sticks and, for me, one of those Moscow Mules from Wednesday's Food52 soiree. I agree; it is no fun to be told what to do - especially when it comes to the creative process of cooking and writing. Having said that, every now and again, someone else knows best!

Rhonda35 February 28, 2012
Okay, yum!! The fish sticks were nice - with fresh fish and a crispy coating you can't go wrong - but what makes this dish is the lime-tarragon aioli, which I could eat with a spoon if I didn't have a dress I have to fit into in a month. Curse you, sdebrango, for inventing such a delicious condiment! ;-)

damson February 28, 2012
We love fish sticks too! But I am wondering if you really deep-fried these, or just fried them in a decent bit of oil? I am a little sad to admit that deep frying takes a lot out of me.
Author Comment

Jestei February 28, 2012
that was what i did: grapeseed oil in a deep frying pan that covered the fish sticks by 2/3. i turned them after i dunno a minute maybe? another minute or two and then right to the paper towel lined plate where there was indeed not a lot of oil left. try it. see what you think

Sagegreen February 27, 2012
What a great find, Jenny. Sdebrango is just a local treasure with all her recipes! I got to experience her cooking first hand last week, too! Simply yum.
Author Comment

boulangere February 27, 2012
I loved these the first time, and love them just as much still. I'm so glad you tried them, Jenny. And liked them.
Author Comment

Jestei February 27, 2012
yes they are going into weeknight rotation

BlueKaleRoad February 27, 2012
We eat a lot of fish, but I never think to make fish sticks. This looks terrific and will be a nice variation for dinner. I love sdbrango's recipes - thanks for sharing!

My son was in "Once Upon a Mattress" a couple of years ago...it's a fun one.

Jestei February 27, 2012
that is just the try out music alas. and i really think these are fun!

arielleclementine February 27, 2012
fantastic recipe! fun write-up! my vote is for The Swamps of Home.
Author Comment

Bevi February 27, 2012
I feed an adult who will devour these and be happy with mayo and all the add ins!
Thank you Jenny, thank you Suzanne!
Author Comment

Jestei February 27, 2012
my husband liked them best of all truth be told

calendargirl February 27, 2012
Looks like the perfect way for us oily-fish-loving adults (bluefish, salmon, mackerel, etc) to accommodate the preference of our white-fish-please teenager --- with that glorious aioli! Thanks so much for this.
Author Comment

AntoniaJames February 27, 2012
Wow, this one is right in my wheelhouse -- waist high and right over the heart of the plate (uh, that would be home plate). And with the spring-like weather lately, my tarragon has returned in full force, so the timing is perfect. This is on my list, and I cannot wait! ;o)
Author Comment

Greenstuff February 27, 2012
You have tarragon already??! I've been loving the chives but haven't seen tarragon yet. Should I get out a headlamp to look or wait until morning?? A tough call. Asparagus anyone? It'll be great with the fish sticks.