Behind the Scenes of FOOD54 (Plus the blooper reel!)

We're thrilled that so many of you loved FOOD54, our April Fools' Day prank. Now we'd like to take you behind the scenes of our (hilarious) shoot day!

While Amanda & Merrill got into costume (more on that in a second), the kitchen was set-dressed: a rotary dial telephone (it was Amanda's when she was a kid!), a red boa in the cabinet, a loaf of Wonder bread by the stove, and White Castle french fries splayed on the counter. 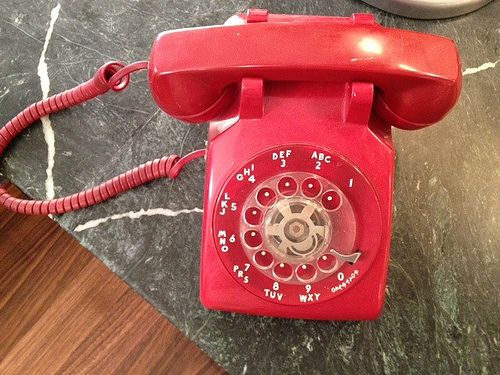 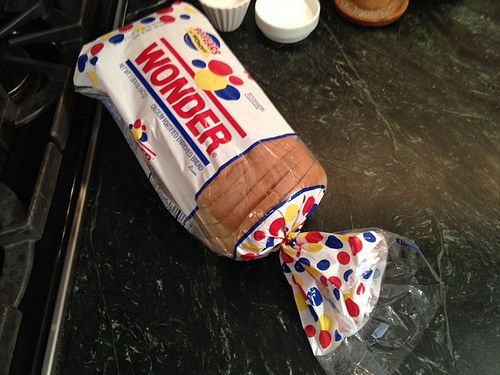 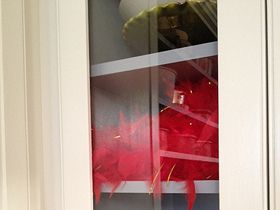 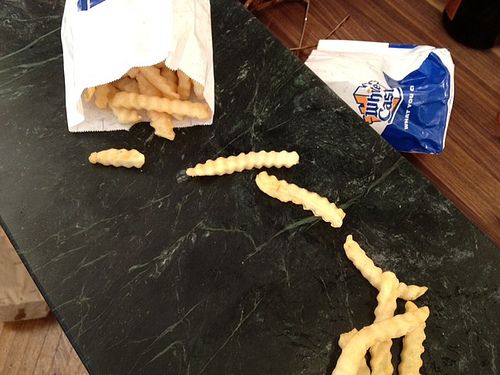 A&M did all their own costume and makeup work -- didn't they look amazing? Merrill's husband Jonathan claimed that he couldn't recognize her! 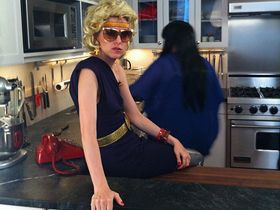 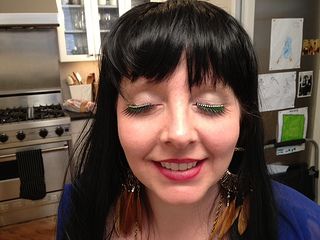 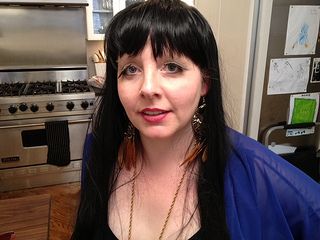 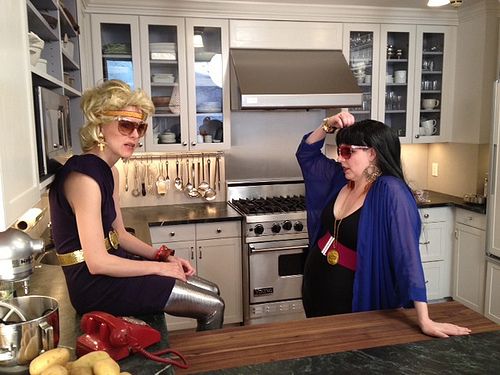 Merrill's wig cap helped. And as we learned throughout the course of the day, glitter gets everywhere. 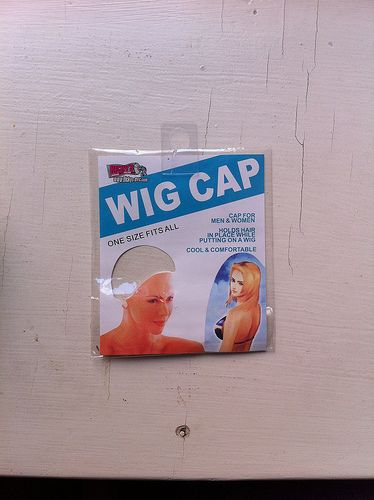 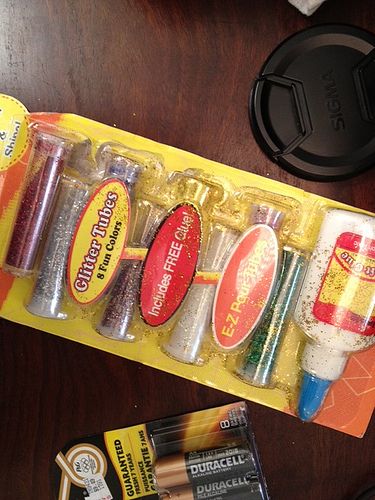 Our intrepid videographer Alex Lisowski kept us in high spirits throughout the shoot in Amanda's kitchen (Kristy pitched in to help with sound while Alex did some close ups): 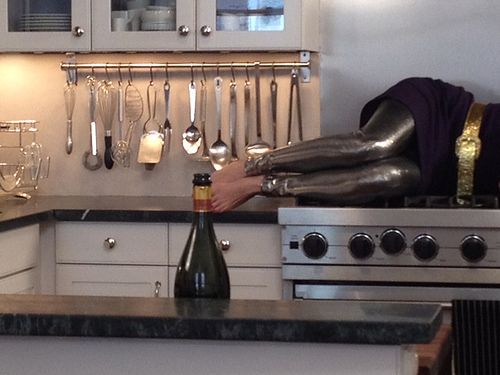 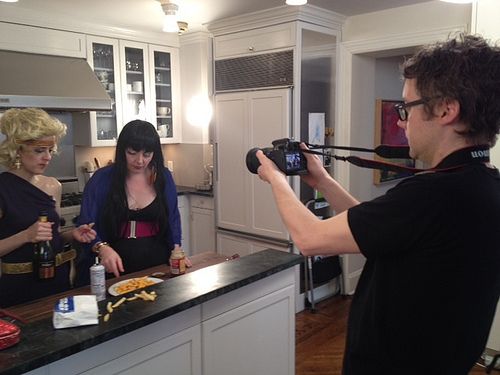 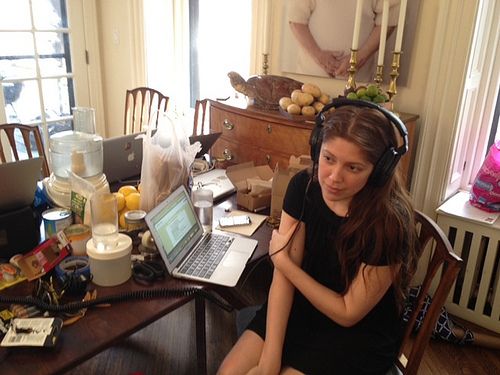 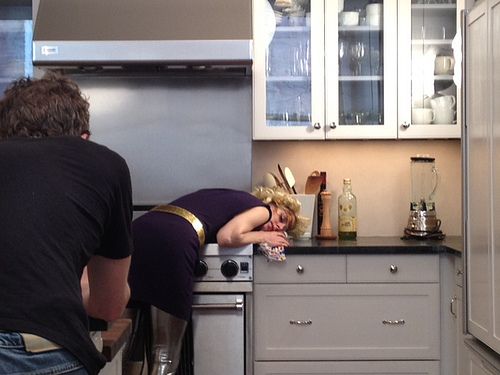 And then we went to the disco! Or rather, FOOD52er Peter Steinberg's basement. (Why does it have a disco ball installed? Long story.) Peter's adorable baby Charlie fell in love with the disco ball as we danced the afternoon away -- and despite our blaring 70s music, it eventually put him to asleep! 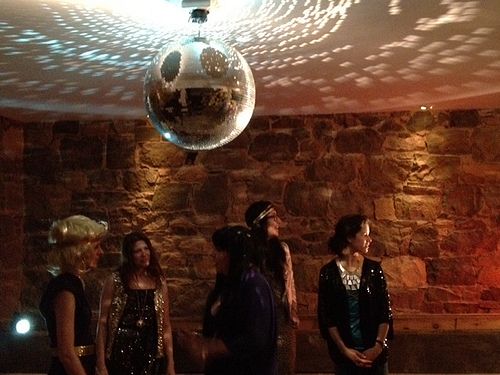 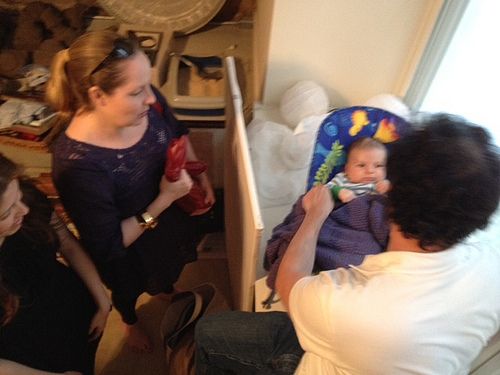 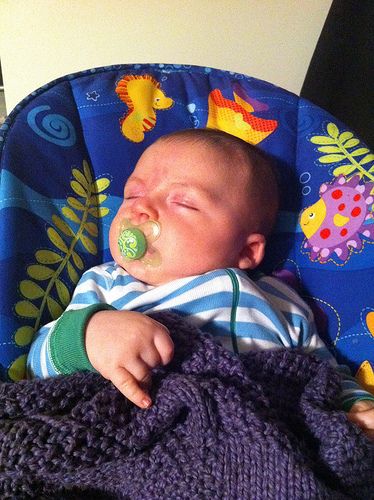 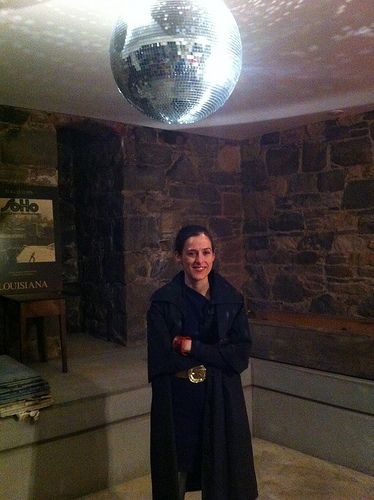 At the end of the day, Walker and Addie wanted in on the disco action too -- do you recognize my glitter shoes and Amanda's silver leggings? 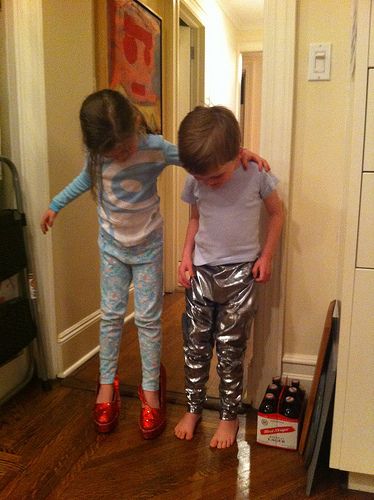 And now...the official FOOD54 bloopers reel, as edited into hilarity by Kyle Orosz. Do NOT miss Amanda crawling up onto her stove!

GreenEats April 10, 2012
There's a reason they call glitter the herpes of arts and crafts. Once you get it on you, you'll never get rid of it.

mrslarkin April 6, 2012
omg i just peed in my pants. again. and Merrill you have the best laugh.

Super jealous of Peter and Charlie's disco ball. that thing is awesome.

aargersi April 6, 2012
Now THAT is a good day at work!!!! HA! Charlie looks so peaceful ... I hope you didn't have to actually eat too many of those disco delights to get the shot :-)

amysarah April 5, 2012
Very funny. But Amanda looks disturbingly like my middle school gym teacher, who turned 'Dancersize' into a form of torture. I feel like I'm about to be sent to the assistant principal's office for not wearing my gym suit and having a smart mouth.

Kristy M. April 5, 2012
Amanda would never turn "dancersize" into a form of torture!

amysarah April 5, 2012
Thank heavens! My PTSD was starting to flare up there for a minute.

Speaking of which, I'm very impressed with Amanda's ability to climb on top of the range without inadvertently turning a knob and setting herself on fire. (As I would undoubtedly do.) Those clothes look highly flammable.

Merrill S. April 5, 2012
She did, however, catch her microphone wire on the edge of the burner as she was dismounting -- not sure if you caught that gem.