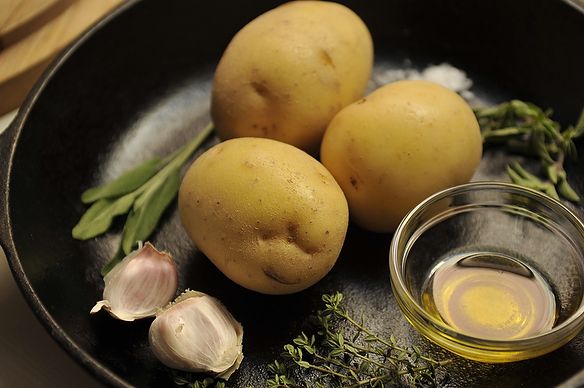 Last year, after having spent 5 years testing recipes (with Merrill!) for a cookbook, it was time to actually sit down and write the book. I did so in the evenings, which meant that my husband, Tad, took over cooking dinner. Tad is a good cook, but not the kind who sees time in the kitchen as a moment for free-association with ingredients. The notion of playing around with recipes in the spirit of experimentation is one that has never occurred to him. Tad is the type of cook who prefers to find a few recipes he likes and master them so he can get in and out of the kitchen and back to reading the paper as quickly as possible. His dinner-party dish is James Beards' Chicken with 40 Cloves of Garlic. He roasts beets wrapped in a foil packet, a technique learned from Tom Colicchio, and he whips up a mean slow-roasted striped bass.

His piece de resistance, however, is roasted potatoes, which he makes in a cast iron pan with lightly smashed whole garlic cloves and whatever herbs are in the fridge. He blankets them with olive oil, scatters on coarse salt and coarsely ground black pepper and then sticks the pan in a hot oven. They're delicious every time.

Once when preparing the potatoes, though, Tad used some white potatoes that had been in the fridge for, oh, a month, give or take a few months. When the potatoes came out of the oven, they were as brown as a chestnut, with a thick, glistening crust, and as sweet as candy -- far outpacing any version he'd made before. The secret, we eventually learned, was the old potatoes. As potatoes age, their starch turns to sugar, making them denser, softer and easier to caramelize. So buy some white potatoes today, and try Tad's recipe in February...

1. Heat the oven to 375 degrees. Spread the potatoes in a 12-inch, well-seasoned cast iron pan -- they should fit comfortably in one layer. Douse with olive oil, like you're marinating them. Add the herbs and garlic, and season generously with salt and pepper. Toss the potatoes a few times to mix in the herbs and seasoning.

2. Roast in the oven, scraping up and turning the potatoes every 10 minutes or so, until the potatoes are well caramelized and tender, about 40 minutes.

AntoniaJames January 2, 2010
I used this technique for Brussels sprouts last night, using garlic but no herbs. (I simply forgot.) My eldest, age 19, dug in and declared, "These Brusslies are seriously good." My sentiments exactly.

potstirrer December 29, 2009
I always roast potatoes this way, and always keep them in the fridge (also an apartment dweller, maybe that's why, but found they keep well in the crisper or even back of the bottom shelf.) One upgrade I like is using duck fat in addition to olive oil if I have it on hand. Flavor and crispiness noticeably better.

Sally December 28, 2009
I made these on Christmas day, and put in another pan with brussels sprouts. I used to spread them on a baking sheet, but I like the cast iron pan much, much better. As for old potatoes, I can never remember how long they've been in the fridge. In any case, they were fab. Thanks!

Amanda H. December 28, 2009
Glad this worked out for you. Everyone else: I just realized that I didn't specify the size of the pan -- we use a 12-inch cast iron pan. And I reduced the amount of potatoes to 3/4 pound to make sure they'll all fit in a single layer.

Kym9932 December 28, 2009
I love using old potatoes. Old potatoes work really well to thicken a soup or thicken a stew and I’ve used old potatoes to make a really mean cornbeef hash.
As for potatoes sprouting, well you have to buy potatoes that have never been in cold storage, if the potato was in cold storage at any time then as soon as heat and or light hits them they will start to sprout.
There is a reason that potatoes are stored in burlap bags. The bags keep out the light and keeps them cool (not cold) and most importantly dry.

SupernaturalBotanicals December 27, 2009
Thanks so much for this recipe. I love the idea of being able to use up old potatoes!

ChefJune December 27, 2009
why do you keep raw potatoes in the fridge in the first place? My farmer relatives told me that was a super nono. and I tried it and they got moldy.

I would love to have 2-month old white potatoes to try this with, but I'm afraid they would be reproducing after that long in the cupboard.

Amanda H. December 27, 2009
Because we live in a warm NYC apartment so we keep them in the fridge so they don't sprout. I'm curious why your farmer relatives say this is a no-no? Ours have never gotten moldy. Why don't you try this with your potatoes in the cupboard after a few weeks rather than 2 months?

mrslarkin December 26, 2009
Great recipe Tad. I make these a lot too. Just had them at our Christmas Eve dinner. With the leftovers yesterday, I heated a skillet with some olive oil and butter, added the potatoes and gently smashed them down with a meat pounder. Cook till nice and crispy brown. Sort of like diner home fries - only better.

Amanda H. December 27, 2009
Susan Spungen, the author of "Recipes" and the food stylist for "Julie & Julia," does this with individual potatoes and calls them potato "tostones" -- I've made them many times, and now look forward to trying your method.

MRubenzahl December 25, 2009
I love this. These will be on my menu tonight. I make roasted potatoes often, using different ways. There is no way to make bad roasted potatoes.

leslie L. December 25, 2009
We too have been doing this for years, but often with handfuls of peeled garlic instead of just a few cloves. The roasted garlic caramelizes - and sticks in your teeth - but it's delicious.

phyllis December 24, 2009
Have bee doing this for years and it's wonderful and guests think you slaved. Like Elycooks, I do this with vegetables, too. Particularly wonderful with cauliflower.

AntoniaJames December 24, 2009
How do you keep the potatoes from sprouting, when they are sitting around that long? Even my Farmers' Market potatoes get little buds on them after a few weeks, and once they sprout, they grow quickly.

Amanda H. December 24, 2009
Maybe our fridge is just cold because I haven't had a problem with them sprouting in the fridge.

Elycooks December 24, 2009
Love this. It's one of those dishes my kids request 3x a week.
We use this treatment for cauliflower, brussel sprouuts, winter sqash of all kinds. Just wonderful! I like your style Tad...and your writing!