We All Scream for Ice Cream: The Scoop on Frozen Treats

Inspired by conversations on the FOOD52 Hotline, we're sharing tips and tricks that make navigating all of our kitchens easier and more fun. Today we investigate ice cream and the like. 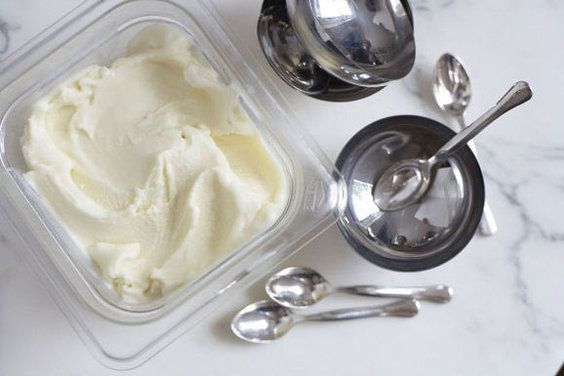 At the birthday parties of your youth, tradition dictated that a scoop of ice cream slumped lazily on the same plate as your cake. Grandma Shirley always ended Sunday meals with a saucer full of orange sherbet, scooped into generous mounds from a big plastic tub. Ice cream only seemed to multiply on your trip to Italy, when streets were lined with carts pushing creamy, colorful gelato. (You obliged, more than once.) Fro-yo, sorbet, and semifreddo just make your head spin. You'll happily eat them all, but what makes each one different? Grab yourself a cone, and we'll take you through all of your favorite frozen treats -- all before you get to the last lick. 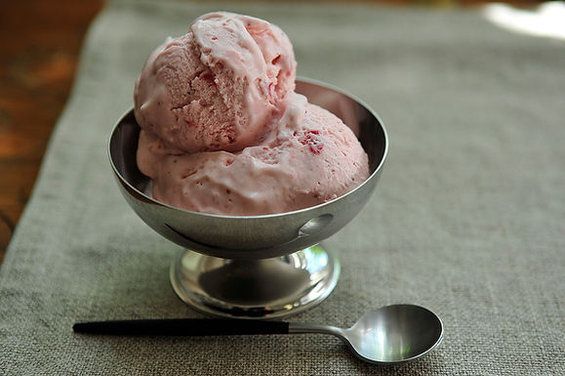 The Scoop: The first record of edible iced confections dates back to 12th Century China, of all places. Who knew? But the quintessential cone didn't make it to American soil until much later. The sugary wafer that we have come to know and love was born out of a mistake, when World's Fair ice cream vendors ran out of dishes for their frozen treats in 1904. A little improvisation and a lot of rolled wafers later, the "World's Fair Cornucopia" was born. Technically, our favorite summertime treat contains cream, milk and up to 60% air incorporated during the spinning process.

How did it all start, anyway? Since it was expensive and hard to source during the 17th century, having ice was a sign of prestige. (Today, we have cars and jewelry, back then, they had ice cubes.) Large pyramids of ice and fruit were constructed for extravagant events, and that's your official precursor to ice cream. When piles of ice got boring, as they were surely destined to, experimentation with dairy begun.

By the numbers: By American standards, ice cream must contain at least 10% milkfat. Usually ice cream has about 14% butterfat, but it can have up to 20%.

Churn It: If you're ready to update your classic Strawberry, try this recipe for Strawberry-Fennel Ice Cream. 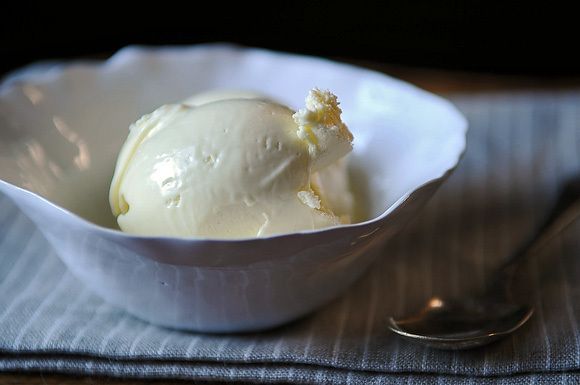 The Scoop: In Italian class, we learn that gelato, literally translated as "frozen," is synonymous with ice cream. Don't believe everything you learned: gelato differs from ice cream in both how it's processed and its ingredients. (The italian daydreams it conjures are a whole separate issue.) Gelato is made from milk instead of cream, and contains 20% air at most. And, because it is churned more slowly at a slightly higher temperature, it's denser than ice cream. Still searching for differences? This infographic will do the trick.

The Exception to the Rule: Certain gelati, like zabaglione (gelato flavored with Marsala), are custard-based and can therefore contain egg yolks. If you're in need of extra richness, order one of these. Oftentimes modern gelato uses corn flour or cornstarch in place of the eggs to cut down on costs and fat. But if you want to be historically correct about it, choose one with eggs.

By the numbers: Gelato normally contains 4 to 8% butterfat.

Churn It: We like this recipe for Toasted Coconut Gelato. Start here, and then graduate to Amanda's tasty custard-based Olive Oil Gelato. 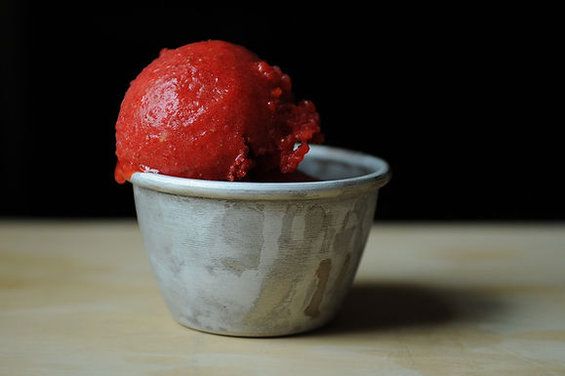 The Scoop: Legend has it that the Romans gathered snow from the mountains to pioneer the first sorbets. It's a great story, but in reality, the earliest sorbets (actually called water ices) were popular in European cities, notably Paris and Florence, in the 1660s. By which we mean, they had it right first. Soon, others followed suit: by the 1670s, it was served to King Charles II in England. Unlike ice cream and most gelato, sorbet contains no milk or eggs, and usually involves a fruit puree. When it crosses the border into Italy, it's called sorbetto, and it's no less delicious.

By the numbers: Sorbets usually do not contain any milkfat, just sugar, and a bit more sugar.

Churn It: David Lebovitz's Chocolate Sorbet is undeniably genius, but if it is fruit you seek in your dessert, The River Cafe's Strawberry Sorbet will not disappoint. 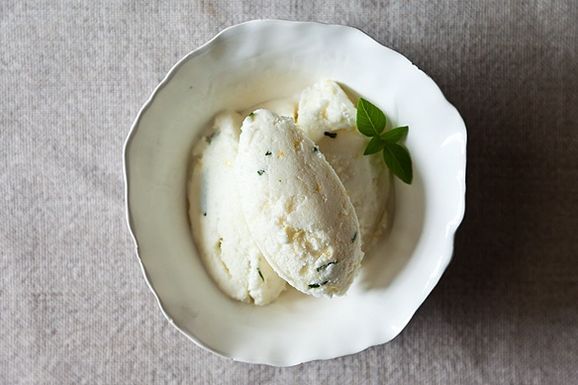 The Scoop: Most important things first: how do you pronounce the word sherbet? We don't have statistics, but this style of frozen treat is almost certainly the most mispronounced of the lot. Without the slip of the tongue and an extra 'r,' sherbet remains the lovechild of sorbet and gelato. It's closely related to sorbet, if a little rebellious with its inclusion of just a bit of dairy.

By the numbers: Technically, sherbet shouldn’t contain milk with more than 2% butterfat.
Churn It: Capture summer in your ice cream maker with this bright, zesty recipe for Lemon Basil Sherbet. 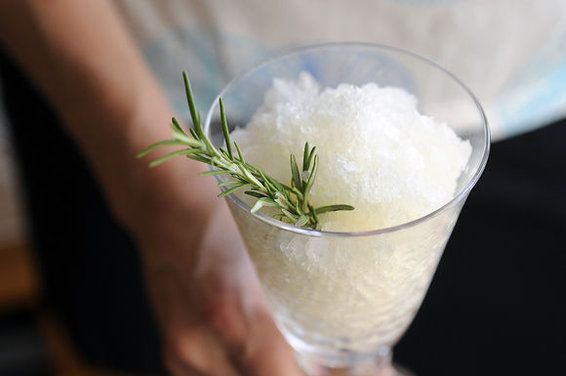 The Scoop: Perhaps less ubiquitous than sorbet, granita is still similar to the dairy-free frozen confection. It gets its slightly crunchy texture from being scraped by hand rather than whipped -- the freezing process is periodically disrupted by a quick stir from a fork, which aids in developing granita's trademark ice crystals. According to the experts, its unique texture cannot be reproduced using a mechanical mixer.

By the numbers: Like sorbet, granita doesn't normally have any milkfat, but usually contains more water in its base than sorbet does.

Churn It: Eat two types in one bowl: combine feta frozen yogurt with a citrusy, herbal granita to create a study in textures. 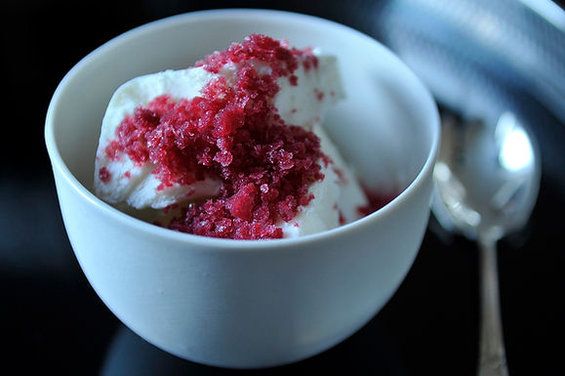 The Scoop: Frozen yogurt, or, to the hip and food trend inclined, fro-yo, uses yogurt as its main dairy element. Bypass the long lines at your local Pinkberry -- we think this one is best homemade.

By the numbers: It can differ in fat content depending on which ingredients have been used. Richer frozen yogurts are usually made from full-fat Greek yogurt (containing about 10% fat), which allows for better freezing and storage. Frozen yogurt can be made with lower fat yogurt, but it should be eaten immediately (not terribly difficult), before it freezes to a hard icy consistency. Frozen yogurts sold commercially usually contain many stabilizers and emulsifiers to keep them from hardening.

Churn It: We might be biased, but for frozen yogurt, we always turn to Merrill's Raspberry Frozen Yogurt. 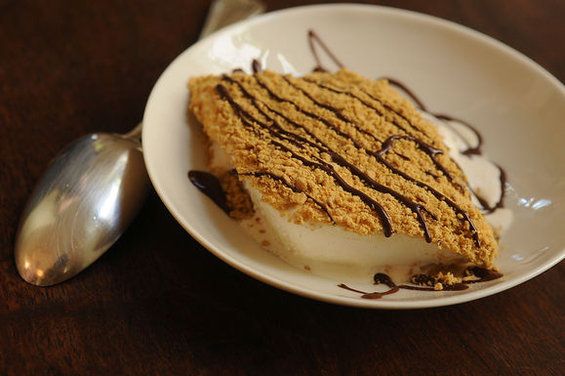 The Scoop: It may sound fancy, but semifreddos (or perfetti) are one of the least fussy frozen treats you can make. Its name translates to partially frozen, and that should give you a good clue to its texture -- part whipped cream and part ice cream, gelato, or custard, semifreddo is essentially a partially frozen mousse. Bonus: they take about 20 minutes of hands-on time to make, they win the award for most flexible frozen confection. Mold their malleable base into whatever shape you like!

The coolest part: Good news for those of you who like to sneak a spoon into the freezer container: the ingredients and amount of air added actually prevent it from ever freezing into a hard solid!

Churn It: For your next dinner party, impress your guests with this Bittersweet Chocolate and Orange Semifreddo, or channel your inner child with this S'mores Semifreddo.

The Scoop: Frozen custard is like ice cream on a night out to the opera -- rich, indulgent, and made that much more elegant from the addition of egg yolks to its base. Post-prohibition, ice cream underwent a huge surge in popularity with the advent of parlors in place of bars. Confections like frozen custard, once only available to the upper classes, became more widely available and well-loved by the masses. So popular, in fact, that WWII soldiers used to jerry-rig ice cream makers out of large canisters in the rear gunner's compartments of their planes.

By the numbers: It should contain 10% milkfat and 1.4% egg yolk solids. When it's feeling extra fancy, it goes by the name of "French ice cream."

Now that you know the basics, you can start filling your freezer. And if this isn't enough for you, we'll be giving you ice cream tips (and recipes!) all week long.

rachelzarrow.com
I think I'm like an eggplant. Flamboyant, enigmatic, and comfortable in my own skin.