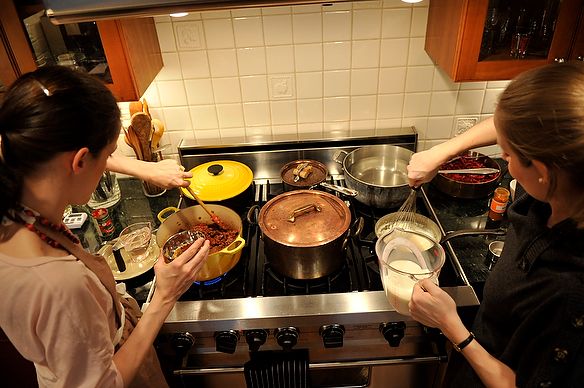 Tuesdays are our big photo shoot days at food52, when we're joined by our lovely and talented photographer, Sarah Shatz, and we cook, style and shoot the finalists' dishes (plus the wildcard winner and assorted other tools, ingredients and the like). And there are, of course, still administrative site matters to maintain; blogs to be written; tweets to be tweeted.

Nevertheless, some Tuesdays are simple. Take last week: in our pool of finalists, we ended up with a grilled cheese sandwich, a bowlful of mussels, and two types of roasted broccoli (one, two) -- all delicious and wonderful recipes in their own right, but none especially labor intensive. None had more than a couple ingredients to chop, or a cook time over half an hour.

This week, however, we really set ourselves up for the cook's equivalent to the Ironman triathlon. For one, we were taking on Nose to Tail recipes, which often coax flavor and texture out of less accommodating cuts of meat through long marinating and cooking times and plenty of tasty supporting accoutrements. And then there were the Baked Pasta dishes, which, no matter how simple, inevitably require several steps: cooking the pasta, making the flavorful accompaniments, and then baking them all together once more, with feeling.

Don't get us wrong, we love getting lost in these sorts of luxurious, multistage affairs in the kitchen -- but we don't usually choose to pile them all on top of one another in a single day. The dirty dishes alone tend to dash that prospect from our minds, not to mention considerations like oven temperature coordination, counter and refrigerator space constraints, recommended daily caffeine intake levels and general sanity.

But this week, we cast aside such middling concerns (or, you know, forgot to think about them at all). A record 11 hours, 1,322 photos, 4 sinks full of dishes, and many fabulous food breaks later, it was a successful, if exhausting day. You probably won't be seeing “Your Best Turducken” going head-to-head with “Your Best Wedding Cake” any time soon, but this marathon photo shoot was loads of fun and well worth the extra effort -- we hope you'll agree. Here's a glimpse at how we got it all done. 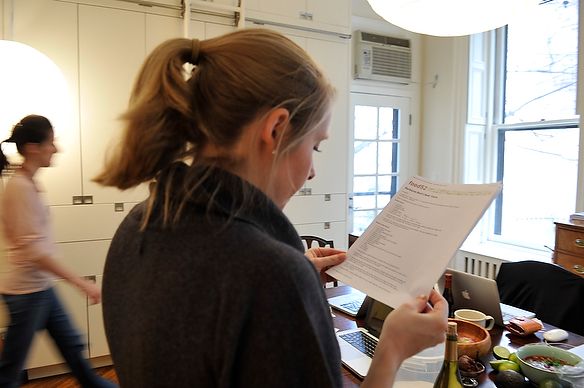 9:13am Merrill consults the recipes that lie ahead while a spectral Amanda breezes through the background. That giant orb behind her is our answer to the photographer's lighting dilemma of shorter, often overcast winter days. It's doing wonders for our seasonal affective disorder too. And we only hit our heads on it, oh, 5-6 times every Tuesday. 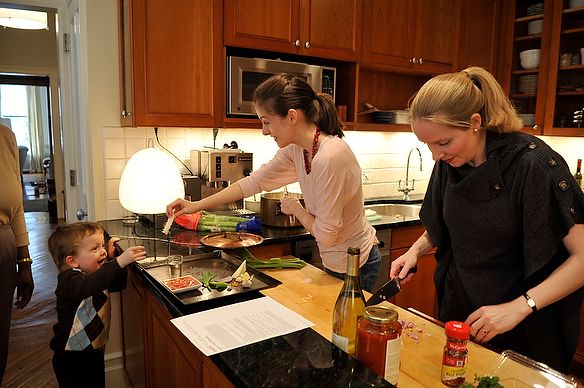 10:24am Amanda shares the oddly appealing texture of tripe with her son Walker. 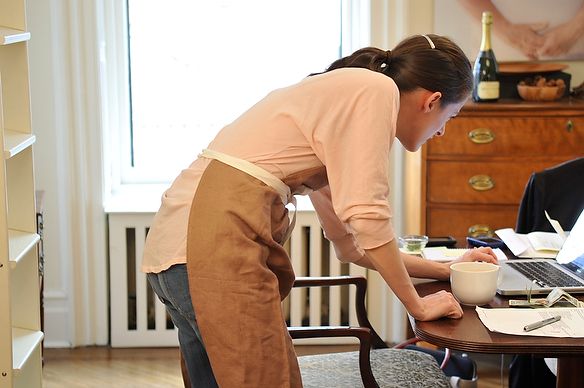 10:47am Even in the middle of wrangling tripe, Amanda diligently checks page view stats.

12:16pm A maxed-out stove. Amanda works on the sauce for the Pastitsio (which, we learned, is really difficult to say without an exclamation point. Pastitsio!) while Merrill whisks together its bechamel topping. Wildcard-winning Beet Fusilli has been bumped to stage right. 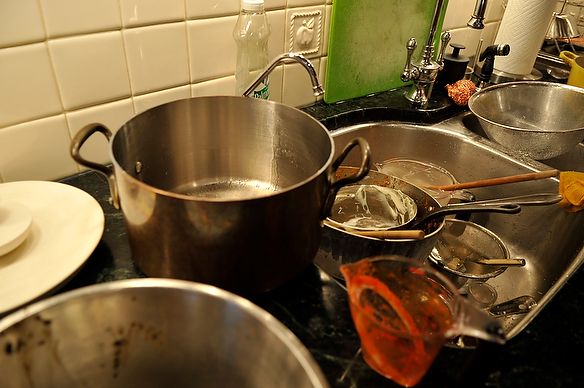 1:32pm Keeping up with all these dishes is a serious workout. 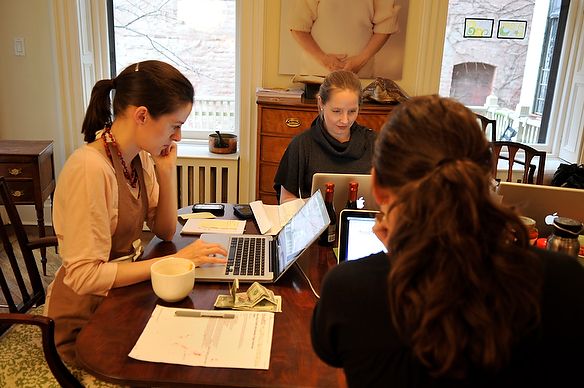 2:25pm During down time between recipes, while offal simmers and pasta bakes, the food52 team hits the “office” to work on editorial content. Note that it's after 2pm and we haven't had anything resembling lunch yet -- this think tank is starting to get a little bit low on gas. 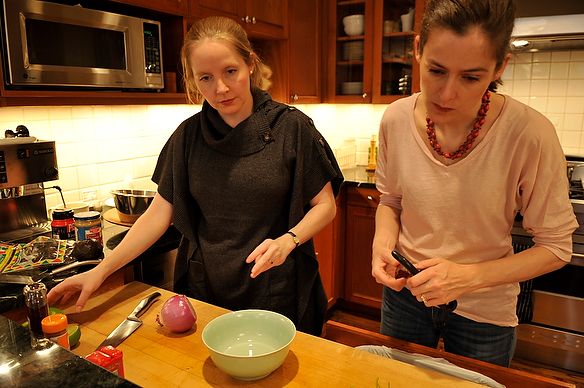 3:44pm Looking rather dazed. This is one of those moments Sarah has to remind A & M to perk up and smile pretty for the camera. 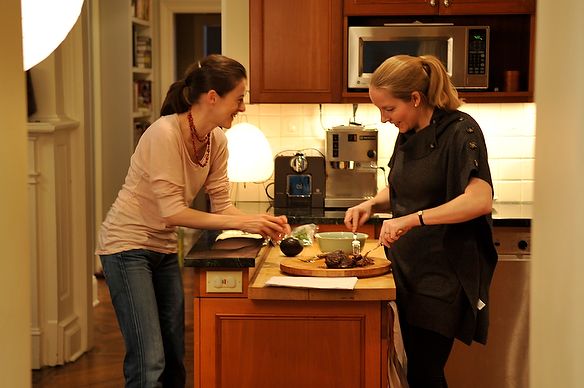 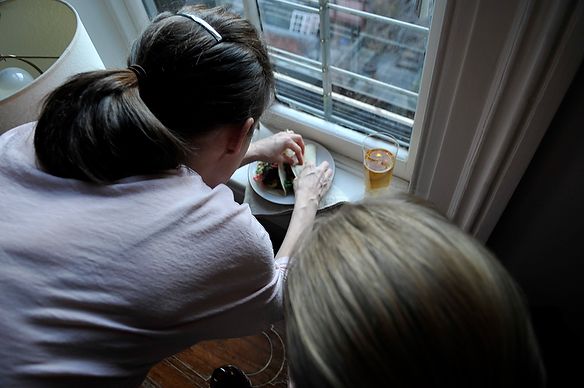 4:57pm Hoping to catch the last glimmer of afternoon sun, A & M move to a window in the room we call the “Atelier” at the front of Amanda's apartment. The tacos aren't behaving for their close-up; they tend to pop open the second they're released (hmm, guess there's a reason they're usually hand-held). Amanda shoves them into submission, discovering that avocado is a handy glue. 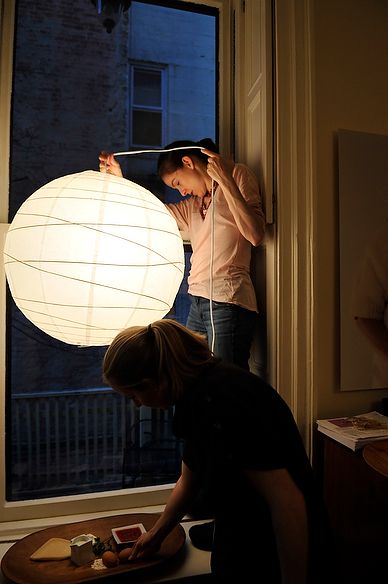 5:13pm Sun all but gone, Amanda steps up to light an ingredient shot late in the day. 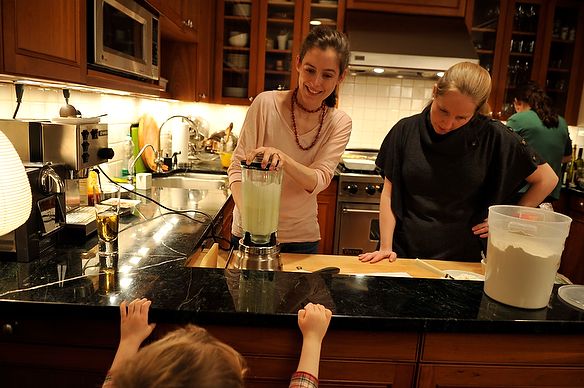 5:44pm Attracted by the siren song of the blender (after all, it makes milkshakes too), Walker comes in to investigate and finds Mom whirring Manicotti batter. 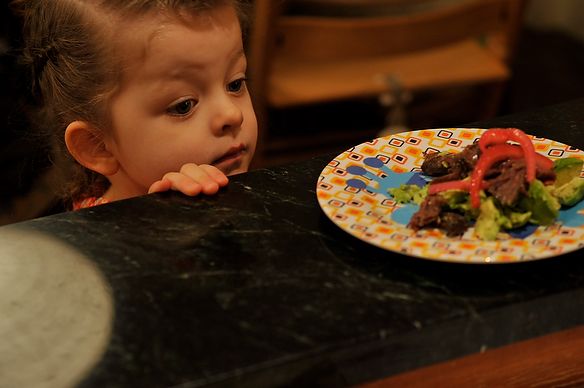 6:12pm Amanda's kids are lucky little gourmands – they get to try leftovers from all the great recipes tested at food52! Don't let this photo of Addie staring down some Barbacoa Beef Cheek bias your vote – the kids' second course was Trippa alla Romana, and they loved that too.

Blissful B. March 16, 2011
I love the picture of you feeding your son tripe. It's such a classic Foodie Parent moment & definitely one for the family scrapbook!

melissav February 5, 2010
Hi Amanda and Merrill - Love this slideshow. Also, just wondering approximately how many times you make a dish that ends up as a finalist?

Amanda H. February 8, 2010
The shoot day is the second time the recipe is tested -- and if we do a video, then that's the third. And in the case of recipes we love, many times after!

jyl_ferris February 2, 2010
Hurray for you for serving your children real food and not hiding it! What's that about. The only way to raise your children to try new foods is to serve it to them deliciously.

Peanut February 1, 2010
I love this post, too! (Kitchen envy, anyone else?) Amanda and Merrill, you make it all so real and accessible - and fun! Thanks for providing great recipes and for making us feel like we can play your game!

Amanda H. February 8, 2010
Thanks -- we can't take credit for the recipes, that's all the work of the community. So glad you're enjoying the site!

kellypea January 31, 2010
Fabulous write up on this experience -- and as much as I know how busy you were, I can imagine the fun. The food is gorgeous, and how is it that your cooking "mess" looks so much more photogenic than mine....Hmmmm... Thanks for this!

mariaraynal January 30, 2010
I absolutely love this post -- a behind-the-scenes anything always fascinates me and this didn't disappoint. Keep it coming! It looks like you all have so much fun -- wonderful!

aeisenhowerturnbull January 30, 2010
Great stuff guys! It was wonderful being able to see how you do the set up for these photos. I love the slideshows, they really give you insight into how you make the dish without being typical. Thanks to you both for all of your hard work to make this a wonderful site to visit:)

Kitchen B. January 29, 2010
Amanda/Merill, does that circular light work...the one Amanda's holding up? Cause if it does, I'm SO OFF to IKEAAAAAAAA

SarahS January 29, 2010
These lanterns work well and are a quick & inexpensive way to light. Because not all of us have Merrill's knot-tying skills, I recommend investing in 2 at a time, because they tear easily and the rigging is not top notch. Make sure the light doesn't touch the paper too! Happy shooting.

Amanda H. January 29, 2010
Thanks, Sarah, for weighing in! And Kitchen Butterfly, here's the link to the photo that was taken with that light -- the baked pasta ingredients: http://www.food52.com/blog/431_your_best_baked_pasta

Ellen S. January 29, 2010
Now I feel guilty, seeing how hard you work. If I lived closer, I'd volunteer to do those dishes! Meanwhile, that Beef Cheek looks amazing.

mrslarkin January 29, 2010
Thanks for the sneak peak! We so appreciate your hard work, ladies. Next week'll be a piece o' cake! (yup, I said it.) Hope the kids like chocolate.

Sugartoast January 29, 2010
Just love seeing you both "behind the scenes" - especially since this site offers such an intimate peek at cooking and food already. The plates, the windows, the views, the flowers - all so inspiring. Thank you for being so generous with your readers!

pierino January 29, 2010
Amanda makes a great tripe wrangler. I'd like to see Christopher Kimball do that.

Demian R. January 29, 2010
How fun! That looks about right. Get as much as possible done in the shortest amount ot time possible. For my cooking projects I have to juggle the food prep while keeping an eye on the kid either in the bouncy seat nearby or napping. He never likes when I have to turn up the lights to photograph stuff...

Elycooks January 28, 2010
Aaak. I'm exhausted just looking at these slides. Thanks for doing what you do! I can't believe your kids eat tripe!

Jennifer A. January 28, 2010
A perfectionist (or two, or three, or four . . .) with spatulas and cameras and clever ideas in the kitchen never sleeps. Thanks for all of your very hard and thoughtful work. Food52 is always so amazing and professional and enlightening.

Amanda H. January 28, 2010
Thanks everyone for your thoughtful comments. And my kids thank you for all of your excellent recipes.

Veronica January 28, 2010
No WONder it's hard to find a phone time! Ladies, you are extraordinary and how great to show us just what you do every Tuesday. The slide-shows & videos make it look so easy...HAH! This brings it home. You are doing it all with the fabulous Sarah...I hope the three of you celebrate at the end of the day..with others? Thank you, Bon Appetit e baisers!

Tammy January 28, 2010
I'm impressed that you cook in such beautiful clothing without making a mess of yourselves!

lastnightsdinner January 28, 2010
This is fabulous. I don't know why I never thought of using one of those lanterns for supplemental light for photos... what a great tip!

Merrill S. January 28, 2010
You should see how we rig it up: each week, at the beginning of the day, I tie what I like to call a "sailor's knot" to stabilize a broken piece of metal that's part of the frame, and at the end of the day, it gets untied again. Very professional.

Amanda H. January 28, 2010
Merrill never knew how much those childhood sailing lessons would pay off! And, btw, that lantern from Pearl River in SoHo cost about $12 (which may explain why it already broke....).