Essays: My Husband the Cook

We'll be running essays about food memories on Feed52. Want to share your story? View our submission guidelines.Today, Shalini shares her story. 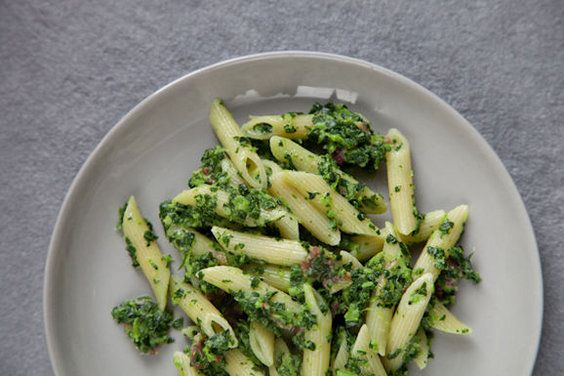 My husband knew how to cook one thing when I met him, and he ate it often.

Pasta, a short kind, boiled a LOT. He lived in a house with three other young men and none of them used the kitchen very much, except for the occasional stoned-out binge on shrimp chips, those pastel discs that puff up when immersed in hot oil. Bryne didn’t go for the shrimp chips, or the bean mash on Texas toast with mayo the others ate. He was older, and seemed to have certain standards for living. (This probably explains a lot about why we ended up together.) Part of this was his one dinner that he cooked. The pasta shape of choice was shells, rigatoni or penne. He would boil this pasta for at least 10-12 minutes, and buy a big bunch of spinach. The spinach would be sautéed with fresh garlic, and placed over the boiled pasta. Over this, he spread some thick, Balkan-style plain yogurt. This was his dinner, and his girlfriend’s too, when she was over.

I was not his girlfriend at the time, but merely a friend. What’s important, though, is that Bryne had conviction. He loved coffee; I remember him returning from a teaching post in the Czech Republic with his own French coffee press and stainless steel espresso pot intact. He would have a “nice rich coffee” every morning with milk, and buy another one later in Kensington Market. This was the first time I heard of the Americano -- we’d take a walk down to the little bulk foods shop/candy store/espresso counter on Augusta Street in Toronto. We'd set ourselves up on the stools, and even though we didn’t have much, Bryne would buy me a latte and himself an Americano, with milk. The coffee was amazingly fragrant and thick, and we'd eclipse our perceived poverty for a few moments.

Years later, we lived together, and were married. In the early days, we’d make salmon and couscous, with a salad of arugula and cherry tomatoes. Later, we rented the ground floor of a house with a garden, where we planted 28 varieties of tomatoes, some tomatillos, many flowers, herbs, and garlic. He bought me an ice cream maker and we started to eat more meat. We made pavlovas and Nicoise salad, and whole fish lit aflame in damp newspaper and barbecued on the little hibachi in our backyard.

Over time we transcribed our favorite recipes to notebooks and started keeping small Moleskines cataloging weekly menus. Eventually, we amassed a cookbook collection that now takes up most of the kitchen floor. 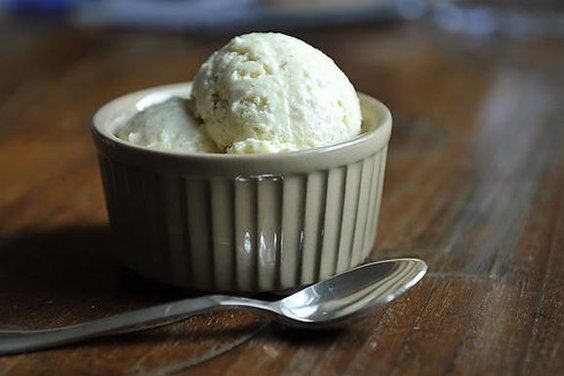 Our lives today revolve around food and recipes -- mine more than his, his at first because of mine. Usually, I make the menus and buy the ingredients for the week. Most often, I supply the desserts, and my husband is the cook. Even though he works full-time, our weeknight meals are often complicated and complex. For Mother’s Day, he made me barbecued flank-steak with fried and roasted artichokes and potatoes from the Sunday Suppers at Luques cookbook. We ate this meal, with a simple arugula salad and leftover orange aioli, and our 6-year old son sat down and ate his, too.

It has been at least 15 years since Bryne made his dish of pasta with yogurt sauce.

Budget and time constraints combined with parent-life can make for some uninspired dinners, but it’s something we’ve never accepted. Cooking is our excitement, our life! Like other parents of small children, especially those who live in apartments, we don’t entertain often. Instead, we focus on the everyday meal as celebration. In the past few weeks we’ve made Sea Bass with Anchovy-Roasted Red Pepper Tomato Sauce from the Casa Moro cookbook, Prawns and Oyster Mushrooms with Manzanilla Sherry from the same for our anniversary, Grilled Squid with Charmoula Sauce. We've made Merrill’s Pea Shoot and Baby Arugula Salad with Meyer Lemon Vinaigrette, Molly ONeill’s Flank Steak with Asian Slaw from the Essential New York Times Cookbook, and pizza with store-bought spelt dough, local goat’s chèvre and fig jam I adapted from Bon Appétit. Life is good, and food is always with us.

Both Bryne and I relish our time in the kitchen -- with our son, and with each other. We recently realized our cooking fixation means we spend much more time discussing food as a family than most people do. We often discuss the menu for that day, or that night. And because I’m not working at an office or organization where everybody loves and talks about food all the time, I settle myself with online reading and communities.

My mother in law, a prolific baker and cook for a family of seven, wonders where her son got his amazing cooking acumen. I say it was always in him, and it shows us his devotion.

If I were to pick a dish that reminds me of my family, it would be this. We’ve only made it a few times, but it was my son Figgy’s idea; we made it when he was four and in kindergarten. He’s always loved helping to make ice cream. My husband is an ice cream aficionado -- he’s kind of crazy for it. This ice cream is not cloyingly sweet and has the slightly floral, herbal note of basil. It’s absolutely delicious.

1. Combine milk, basil, ¼ cup of the sugar, and salt in a medium saucepan and bring to a boil. Stir the mixture and remove from heat as soon as it boils, in other words scald it and take it off the heat pronto! Let this sit for 30 minutes so the flavors can develop.

2. When cooled down, transfer the milk basil mixture to a blender and puree until the basil is finely minced. This will take about a minute.

3. Beat the egg yolks and sugar together until they are pale and thick: this is going to be easiest using a stand mixer, given the next step. Pour the milk-basil mixture into the egg yolk sugar mixture and whisk it all together. Once combined, pour the whole lot into a saucepan to heat up to make your custard!

4. Stir, and stir and stir over a low heat. The mixture should be getting slightly thick on the back of your spoon. Be sure not to let the mixture boil. Once it has thickened, remove the mixture from the heat, strain through a fine-meshed sieve, and chill in a bowl of ice water.

5. Put the bowl of chilled basil custard in the fridge for a few hours, or, if pressed for time, move on to the next step.

6. Stir the cold whipping cream into your heavenly basil custard. Then, pour it in the ice cream maker and churn as per your maker's instructions.

7. Chill in air-tight containers in the freezer for at least 2 hours to firm up. YUM!

noyaux.blogspot.ca
I'm obsessed with finding the next perfect recipe for my life. Usually this involves chocolate, children's lunch ideas, and family dinners. Occasionally there's a taste or texture I can't get out of my head, and it's got to be made, bought or sourced soon. I'm in Toronto with a toddler, a teen, and a husband who cooks!

Shalini September 6, 2012
Thank you Madhuja, I am so glad you enjoyed it!

healthierkitchen September 4, 2012
What a lovely tribute to your husband and your life together!
Author Comment

Shalini September 4, 2012
Thank you healthierkitchen! I've gotta give him credit...