We'll be running essays about food memories on Feed52. Want to share your story? View our submission guidelines.Today, Anna Hewitt has the floor. 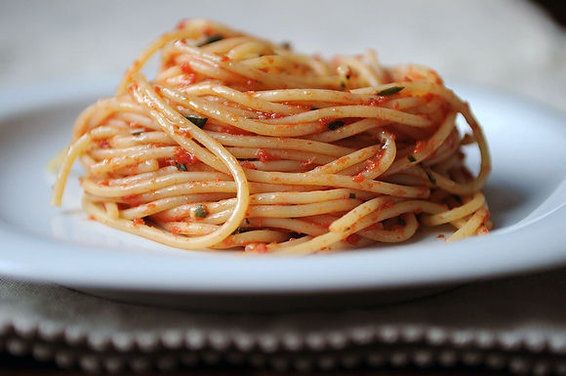 The spaghetti was burned, but maybe salvageable. The sink was full of dishes. A stack of bowls had fallen off the top of the refrigerator and shattered, and our guests were sweating in the tiny, stuffy dining room where they sat at a table that was too low to be properly comfortable. As I scrubbed at the pans in the sink, I wasn’t worried. It was only one imperfect night, one dinner, but it was the restaurant.

It had started earlier in the summer. My sister Carrie and our two closest friends, Ivy and Tess, were constant companions when school was out. We spent the Maine summer swimming in the river, running through the woods, and scheming and executing complicated plans. We could dream up anything and make it happen. The summer I was eleven, we decided to create a restaurant for our parents, just for one night.

We loved projects like this, which required weeks of arguing about what we would serve and where the restaurant would be. When we weren’t running around outside, we sat on the couch and discussed our plans. To us it was always the restaurant, but we named it by combining the first letter of our four names, which became the offbeat and hard to pronounce Tica’s Atic. We spent several afternoons painting signs, typing up the menu, and hand delivered invitations, "formal dress" required.

My sister, the youngest, always wanted a promotion. As soon as we decided on an important detail, she had to disagree. "I want to be the head cook," she would say. Tess and I would not relinquish our power as the older sisters. "That’s not fair," she would respond. If we weren’t careful, she would curl up into an immobile ball, stopping all progress for the day. Finally, we relented and gave her the title of head waitress. These small crises didn’t faze us. There was no doubt that everything would come together.

We weren’t old enough to drive, so our parents brought us to the grocery store the day before. One minute we were in our usual seats in the van, and then I was pushing a cart, like an adult, under the fluorescent grocery store lights. The cart’s sticky wheels were difficult to steer, especially since I had to hold the calculator in my left hand. Tess had the list and called out items to Carrie and Ivy as we meandered through the aisles. "Spaghetti." As they dropped it into the cart, I checked the price and added it to the total. "Tomato Sauce." "Bananas." "Chocolate." As the cart filled, I made sure that we stayed within our budget. I felt so grown up, smart, and responsible -- not just grabbing things, but choosing carefully and sticking to what we could afford.

We had cooked and followed recipes before but creating a whole meal from start to finish was different. The menu started with chips and guacamole, then lemon chicken and mashed potatoes or spaghetti with tomato sauce for the main course, and brownies for dessert. Tess and I stood by the sink to wrestle the skin off the chicken legs. We giggled constantly while working on this awkward and repulsive task. It was a slow tug of war, like peeling off a very sticky sock. Once the chicken was naked in a glass baking dish ready to be dressed up with lemon, I pinched the Styrofoam tray and its juice-soaked lining with two fingers and deposited in the trash. Ivy mashed avocadoes into guacamole, smelling and tasting the cumin curiously. We couldn’t understand why a recipe for brownies would ever call for salt, so we left it out. By the stove, my sister sent peels flying as she readied potatoes for boiling. After she whipped them into dense clouds, I tasted a steaming spoonful and felt mashed potatoes burning all the way down my throat.

It must have been one of the hottest days of the summer, but we didn’t have time to go for a swim. The curtains were drawn against the sun as we mixed, chopped, stirred, and tasted. A fan whirred, making the stagnant kitchen air slightly bearable. Once the table was set with blue china plates, we took a break. I wiped my bangs from my sweaty forehead and slumped onto the deck behind the house with a cool ginger ale and ice cream float. As I slurped the sweet refreshment, I thought about how the evening would go.

When our guests arrived, the waitresses showed them into our playroom, made hotter on that humid summer day by the sheets we had hung to cover the imperfect walls. Tess and I, now officially the cooks, stayed in the kitchen, but peeked out at our parents as they entered the restaurant. My dad wore a button down shirt, his version of formal, and my stepmother had on a long black strapless dress, pulled from the very back of the closet. Tess and Ivy's parents were dressed up, too, and everyone wore huge smiles.

The waitresses took orders while I struggled to salvage the burned spaghetti, pulling the strands free from the bottom of the battered aluminum pot. As our diners ate and sweated, Tess and I washed and dried dishes, stacking some so precariously that this restaurant was the last meal they would see. Wayward tomato sauce decorated the stovetop; parts of the floor felt sticky under my flip-flops. There was still cleaning up to do, but I didn’t hesitate when our guests pulled us from the kitchen to join them for dessert.

It was just one day of cooking -- just one meal -- but my feet had never ached so from standing. It was intense, hot, tiring. Just like every restaurant, every night. At the time, we were not focused on clearing the tables quickly, perfectly preparing and plating orders, or keeping water glasses full. I had no idea of the long hours and work that it takes to make a restaurant happen. I just knew that feeding someone, however fancily or imperfectly, was a form of caring and a way to show my love.

Written by: Anna Be

roadtothefarm.blogspot.com
I dream of living on a farm, but now I spend most of my days sewing, writing, and cooking in the Saint Paul, Minnesota apartment that I share with my husband, several bicycles, and growing collections of cookbooks and fabric.

Catherine H. January 26, 2013
Nicely captured. I will always cherish and hold the memory of your wild kitchen endeavors close.

Kitchen B. December 1, 2012
When I read it, I thought about my children. And then about my childhood. You will make me keep a 2013 resolution of having the children take turns....or better still cook together. Thank you for sharing your memories!

Courtney P. December 1, 2012
What a beautiful story! Totally brought back the memory of my sister and I preparing meals for our parents as a "date night" (lucky them! They got two school age children preparing food for them!) but such good memories.

rachel W. November 30, 2012
What a wonderful story...so well written, it brought a smile to my face! Thanks for sharing :)