We'll be running essays about food memories on Feed52. Want to share your story? View our submission guidelines.Today, Gretchen Sneegas has the spotlight. 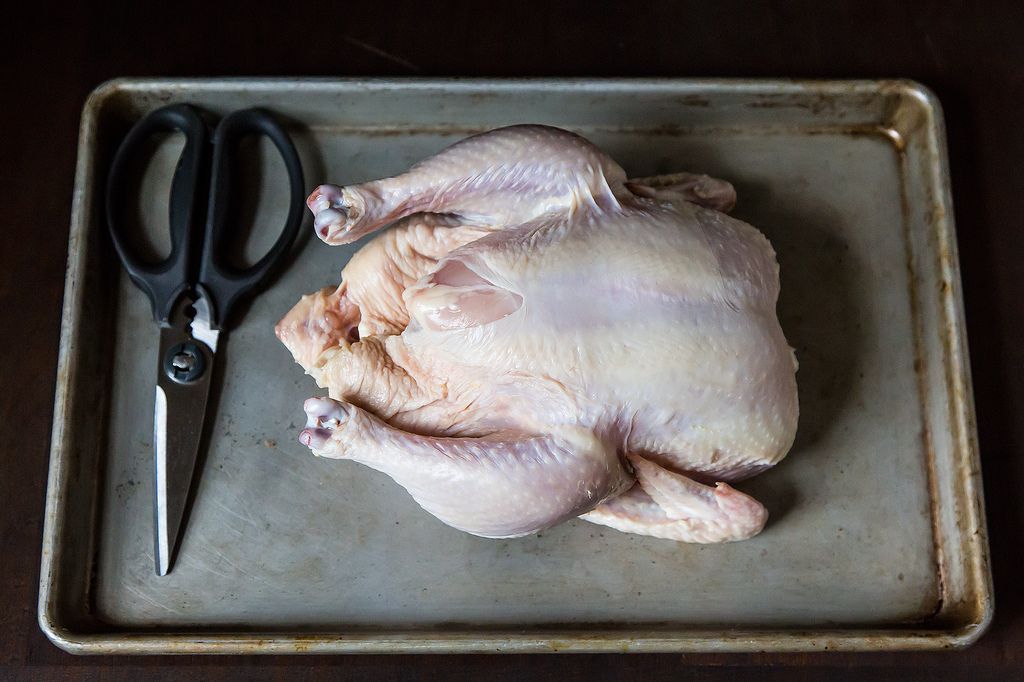 I’ll be honest -- it was a somewhat traumatic experience. I’m not sure what I was expecting, exactly. Bragging rights at social gatherings? A surge of spiritual gratitude for the life of the chicken? Gritty pictures and a cutting-edge story for my farm blog?

Instead, I found myself on my knees, slicing the chicken’s neck with a razor blade and muttering, “I’m sorry, I’m sorry, I’m sorry,” over and over again as she bled out onto the grass until, after what seemed like an interminable period but was really little more than a minute, she convulsed, expelling her little chicken soul into the Great Beyond, leaving me with a feathery carcass and a mind in turmoil.

I was, I will admit, weirdly excited about my first chicken processing event. For one thing, I thought shedding my pesky chicken-killing-virginity would give me street cred in the farming world. Also, I wanted to see if chicken lungs are as oddly colored as Michael Pollan claims in The Omnivore’s Dilemma. (They are exactly the same shade as a Barbie convertible, in case anyone is curious.) But most importantly, I wanted to find a connection with the food on my table.

I am, like the majority of my generation, a child of the suburbs. And while my mom had the odd tomato plant growing in her flower beds, there were some pretty embarrassing gaps in my agrarian education. I couldn’t have told you what a broccoli plant looked like. I had never heard of bok choy or radicchio, much less tasted them. And if someone had handed me a live chicken and told me to get it ready for a stock pot, I would have stared at them blankly, and then run away, never to be seen again.

Apprenticing on a farm was essential for both my evolution as a cook and the deepening of my understanding of food and where it comes from. Never before had I seen such bountiful, fresh produce. I swooned over the vivid, glamorous names, the Knuckle Purple Peas and Cajun Jewel Okras and China Rose Radishes. I began to experiment, using only what I could find in the pantry or cooler: hearty pancakes made from startlingly purple Caribé potatoes, topped with dill yogurt dressing; lasagnas layered with fat, fleshy heirloom tomatoes and Asian braising greens; flaky buttermilk biscuits flecked with freshly picked herbs. It was my first summer of seasonal cooking, and I gave myself up to it completely, swearing never to purchase strawberries from the grocery store again.

But back to the chicken.

I didn’t become overwhelmed with guilt and turn vegetarian, in case anyone was wondering. Far from it. But as the summer progressed, I knew that the day was approaching when I must take that final, fateful step.

It was a Virginian summer day that dawned humid and hot. We set the stage carefully: long tables underneath a tent, loaded with cutting boards and knives; orange extension cords snaking down the hill from the house, hooked up to the Featherman plucker; a large vat of steaming water ready for scalding; and, ominously, lengths of twine and razors laying next to the fence. I somberly tied on my gingham apron. We were ready to begin.

Only Brian -- one of my fellow apprentices -- had processed chickens before. We stood in a semi-circle as he tied up the first chicken by her feet and hung her upside down. Using a sharp blade, he swiftly but carefully cut two lines down her neck, severing the arteries. Soon it was time for each of us to try, and despite the weak jokes we made, everyone was solemn when their turn came.

By the time we began the rest of the process, which was easy by comparison, the moment had passed, like a cloud crossing the sun. We formed a line, one person scalding the birds, the next plucking, the third beheading, the last few eviscerating. I was towards the end. With each chicken I grew more practiced at swiping my hand around the bird’s cavity, removing the livers and gizzards and hearts and intestines as a compact package, dunking her into an ice bath before beginning on the next.

As I gently cut my first chicken open that July afternoon, I was astounded by the thick slabs of fat lining her body, the same color as a New York taxi. I pulled out yolks, quivering and erect and shockingly orange in my palm. When I removed her crop (where chickens store food until it makes its way to their stomach), I could see crisp, green blades of grass resting within. And later that night, when I put her in a stock pot, fat billowed to the surface of the water, shining and yellow, creating broth rich and savory and tasting more like a chicken than any chicken I’d ever eaten. And then, as cheesy as it sounds, I found myself feeling grateful for her life.

I will admit, I do tell people about killing chickens at social gatherings. And I did write about it on my blog, complete with gritty pictures. And, in a way, it has given me that farmer “street cred” I yearned for, but not for the reasons I thought it would.

I cannot turn back. Even if I never pick up another razor blade, I will always have killed a chicken. It is an indelible part of me. I wish it were an indelible part of more people in the world. I want others to witness the ultimate sacrifice a chicken can make, to smell singed feathers, and to hold a yolk in their hands.

girlwiththegreenhair.blogspot.com
I am currently earning my Ph.D. in Geography at University of Georgia, following on the heels of a Masters in Food Studies degree at Chatham U. in Pittsburgh. Prior to that, I did a lot of things... disaster relief, working on organic farms, re-seeding oyster beds, refereeing dodgeball at Boys and Girls Clubs, volunteering at food banks, and milking cows, to name a few. I've enjoyed (almost) all of it. I love to write, take pictures, and make things to eat. Will you be my friend?

Kitchen B. November 26, 2012
Oh Gretchen, you made me laugh, and cry, and recount my very recent experiences preparing 'quails', which are much smaller than chickens! Sigh.....a life's lesson, but one very well told. Thank you!!!!
Author Comment

girlwiththegreenhair January 29, 2013
Well thank you for the compliment! I've never prepared a quail, but I can imagine it would be tough... they're tiny!

walkie74 November 23, 2012
My mother and aunt grew up on a farm as children. My aunt was the one who took care of the chicken killing duties, while my mother did her share of the cooking. I haven't had the same experiences they did, but I wish I had, if for no other reason than (like you) to remind myself that chicken doesn't appear headless and neatly packaged in a styrofoam container. Thank you for sharing.
Author Comment

girlwiththegreenhair January 29, 2013
Yes, my mom, grandmother, and great grandmother all had their fill of chicken killing. When she read this, my mom told me she'll never forget the smell of singed chicken feathers. It definitely sticks with you.