We're running essays about food memories from our community. Want to share your story? View our submission guidelines. Today, Cristina Sciarra on the raw beans that threatened to spoil dinner. 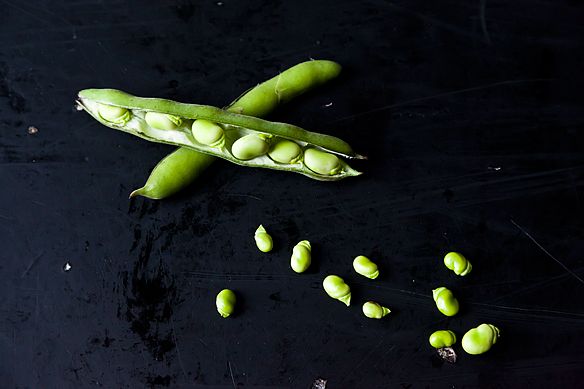 It was Valentine’s Day and I volunteered to cook us dinner, one we’d both remember. I thought it was a romantic gesture: “Thank you for moving across an ocean for me, I really appreciate it. Here’s a lamb chop in gratitude.” Also, I revel in kitchen challenges. In the fantasyland where I designed my menu, Escoffier and Julia Child danced joyously in front of a crackling hearth, ecstatically shaking whisks above their heads like maracas.

Are you familiar with the French? In case you aren’t: here was a man whose best-loved comfort food involved making béchamel. I had trouble, in those early days, convincing my Frenchman to sample certain foodstuffs stateside. He hails from the western coast of France, a region lauded for its sea creatures. (To put things into perspective, his mother used to send him on foot to collect sacks of oysters and mussels directly from coastal farmers when he was little.) During visits to his familial home, I've tried all number of crustaceans I previously did not know existed: miniscule "crevette grise," eaten whole and brackishly juicy with dark bread and butter, and small sweet scallops attached to their shells by a comma of coral roe. I ate my first oyster in his parent’s garden. I can still recall the tinny-bright rush of it, the creamy brine that opened in my mouth after I punctured it with an incisor.

But the Frenchman is an equal opportunity lover. I don't think he ever met a piece of duck he didn't like. (Certainly we ate enough foie gras at Christmas to keep a village in business.) Let us consider grillon, a hunky pork pâté similar to rillettes, and then bœuf bourguignon, for good measure. He favors meat tender to the point of melting, meat so long-languished in the oven so that knife and fork become irrelevant.

I made plans for cream of mushroom soup. I went to the market and filled a paper bag to bursting with dirt-drenched mushrooms. To avoid any misfires, I decided to follow a famous and well-regarded chef’s recipe. Hours later, still bent over the kitchen sink (ok, hours might be a minor exaggeration, but that’s what it felt like), still carefully brushing dirt off what I’m sure was five hundred mushrooms, I will admit ill will against the creator of said recipe. When the mushrooms were finally clean, I got to work sautéing them in salty butter. I didn’t crowd them. They smelled quite nice.

After I added the cream, the real difficulty began. Armed with an immersion blender, I got to work blitzing the bejesus out of that soup. The misfortune was, it never really emulsified. I was left with the flotsam and jetsam of tiny, rubbery bits of mushroom. To the cheesecloth! To the sieve! I ran that soup through both many times until I had strained it into silky submission. In the end, the result was a sort of mushroom-flavored cream. Ah well. “Soup” is overrated. The Frenchman seemed to like it.

Cassoulet followed. This was to be my big ta-da. Cassoulet is the Frenchman’s favorite favorite, and I was prepared to do it right. I went to the butcher for a pork rind that I boiled and skimmed. I filled our apartment with the smells of fenneled sausage and pulled tender meat from confited legs of duck. I let my Dutch oven rest intermittently in the fridge over the course of three days. It was my first go around with dried beans, the biggest white beans I could find, obviously. I boiled those beans furiously, and then I let them soak overnight in a pot with carrots and onion and garlic. As we sat down to eat, I’m not embarrassed to say I was quite proud of myself. The casserole I pulled from the oven was scattered generously with flaxen breadcrumbs. It smelled divine.

Have you deduced my downfall? That dried beans must be soaked and then boiled, not the other way around? The contents of the casserole I pulled from the oven were well-seasoned and largely inedible. Please imagine two people sitting at a candle-lit table, spasmodically spitting huge, raw beans into a napkin. Not my finest culinary moment, and not exactly the picture of romance I’d imagined.

But love has its compensations. We drank wine, at least a bottle. I pulled chocolate ice cream from the freezer and we ate it straight out of the container. It turns out that’s all you need, really—some wine, and a bit of dark chocolate.

A handsome Frenchman is optional, but it certainly doesn’t hurt.

theroamingkitchen.com
Cristina is a writer, cook, and day job real estate developer. She studied literature, holds an MFA in Fiction Writing, and completed the Basic Cuisine course at Le Cordon Bleu in Paris. She lives in Jersey City with her husband--a Frenchman she met in Spain--and their sweet black cat, Minou. Follow her writings, recipes, publications and photography at theroamingkitchen.com.