Every week, Caroline Wright will be creating simple, civilized recipes for Food52 that feed four -- for under $20, in under 20 minutes.

Today: Dinner tonight? Whole-grain crepes stuffed with greens and brie (with a simple batter you can whip up in the blender, lickety-split). 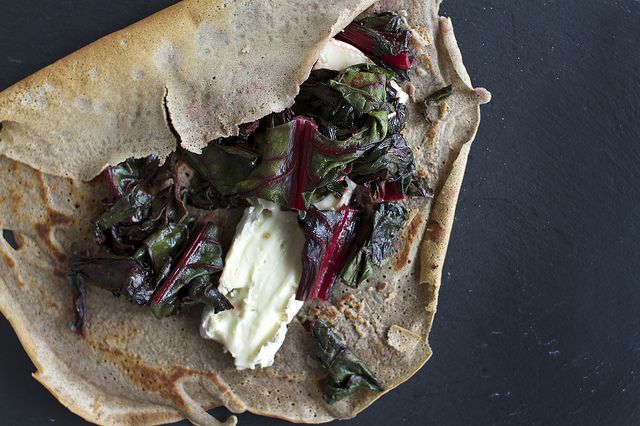 Some late-teen college survivalists eat ramen. I ate crepes. My budget, more than my diet, demanded them during my college years in Paris. I ate them with such gusto that it borders a rivalry to Sam and his affinity for green eggs and ham.

The crepes I’ve made here are whipped up – literally – in a blender, which I’ve found bypasses the resting time I usually like to extend to crepe batter. Swirled in a nonstick skillet, these crepes are a close relative to those I would buy from a crepe stand on my way to class. I filled these with Swiss chard and a nice hunk of Brie for reasons that likely require no explanation, and served them alongside a salad of simply dressed and seasoned greens.

Twenty-Dollar, Twenty-Minute™ Meals grew into a cookbook that’s being published by Workman in May 2013. The recipes found here are original, made especially for Food52 to once again celebrate simple food with friends.

Andrea D. July 10, 2013
I love buckwheat and would love to try this! I love imagining what the flavor combination must taste like! yums :)

laurenlocally April 26, 2013
I (not so) secretly get charded out during my CSA and now can't wait to make this recipe!

Cathy G. April 24, 2013
Can the crepes be made ahead and frozen?
Author Comment

Caroline W. April 25, 2013
I have never tried this, but, yes, I think they would work. I would just make sure they're completely cooled before freezing (obvi), and maybe put sheets of waxed paper between for easy access to individual crepes.

Foodiewithalife April 24, 2013
I'm really impressed your college go-to recipe is a crepe! Mine was cheese quesadilla on a George Forman grill. I'm going to try this for dinner tonight!

Vstarr71 April 24, 2013
Mmmm...just made a sweetened version for breakfast...added 1 tsp of coconut sugar and topped with fruit:))) thank you for the inspiration!

Comeandcookwithus April 24, 2013
Thank you for the inspiration. We made these buckwheat crepes with kale, spinach and Brie for dinner tonight http://instagram.com/p/YeAMGsipQS/

Kenzi W. April 24, 2013
This is amazing! Thanks so much for sharing with us.
Author Comment